I went searching for a noun for a group of architecture lovers.  Buildingistas?  Archiluvvies?  No such word existed, but I did find that I wasn’t alone in loving the world’s buildings.  Travel for me is so much about how people live their lives, what they build in their spaces and how old and new buildings coexist around the world.  I’ve been lucky enough to explore some absolutely beautiful places, from which this small collection of cities emerged.  Welcome to the beauty we humans design, which lives alongside that nature gave us. 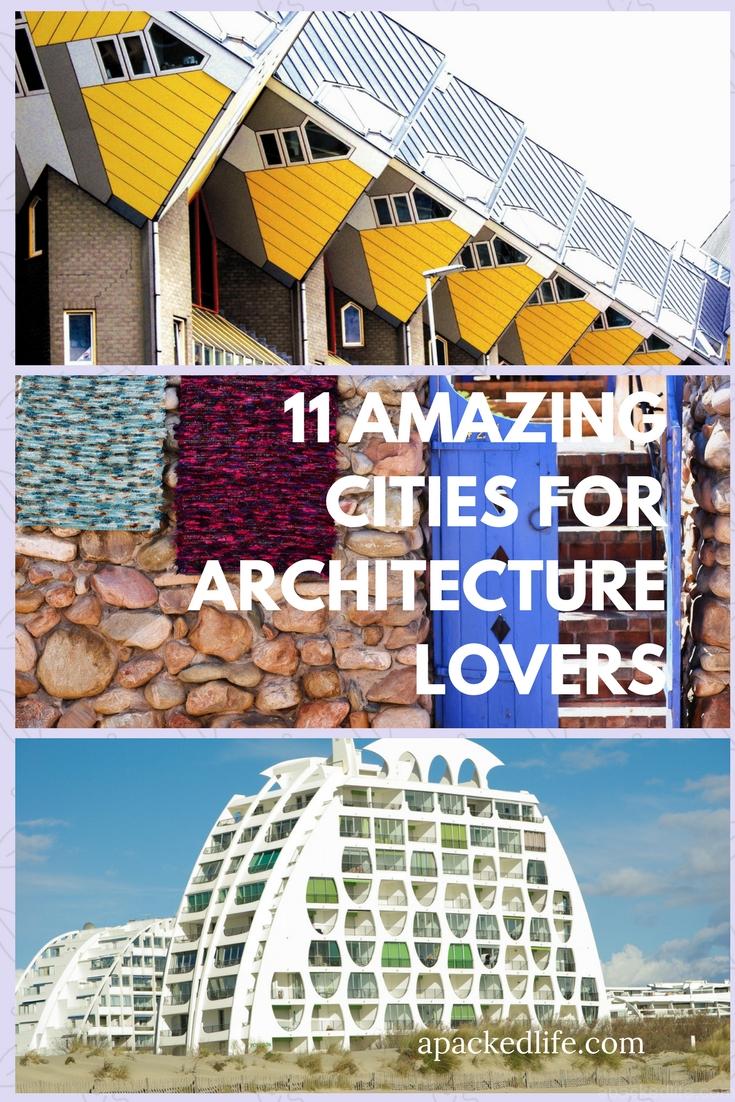 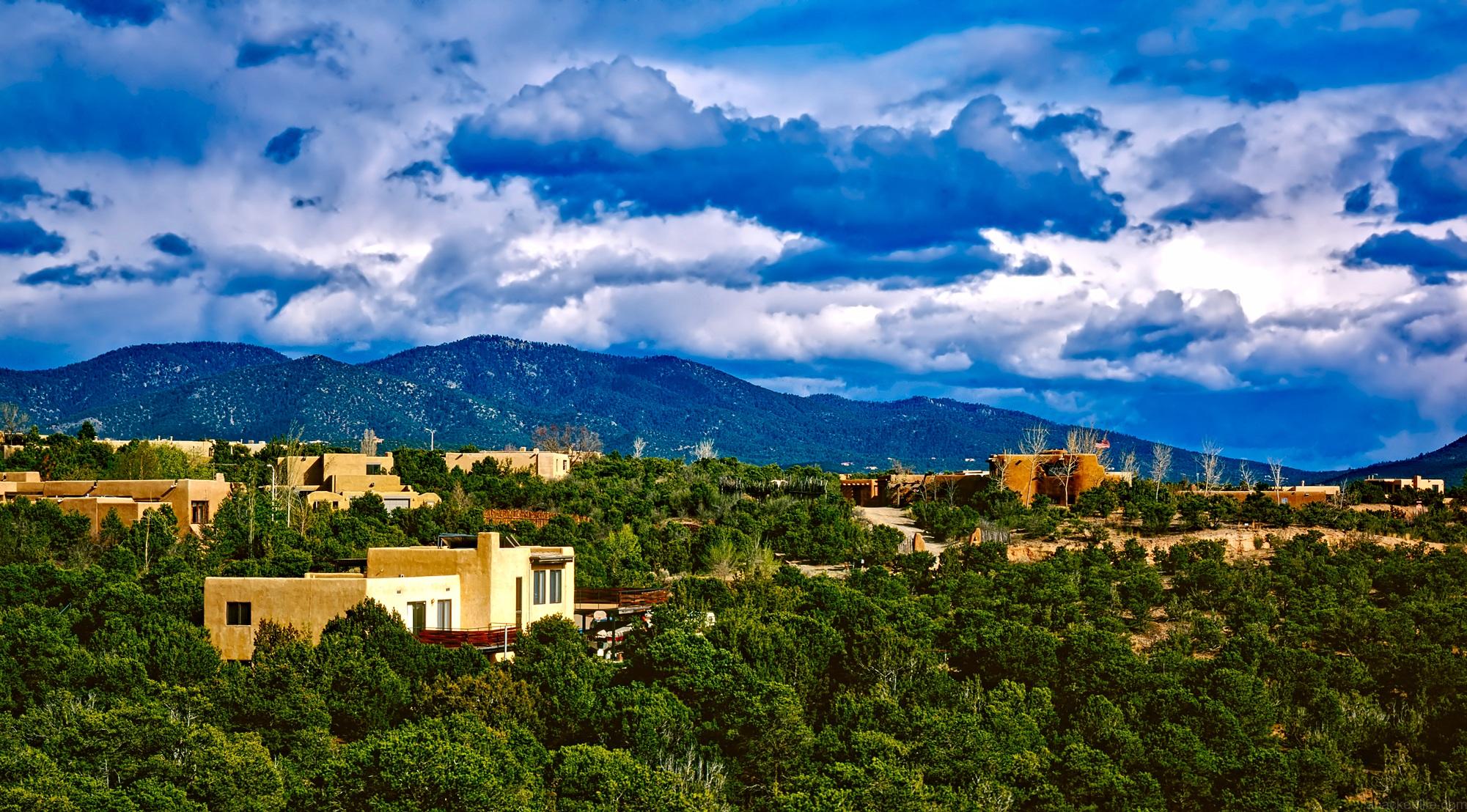 Santa Fe’s the oldest state capital in the USA, and the oldest city in the state of New Mexico.  Back as far as 1912, there was an effort to ensure that city planning preserved the architecture of the buildings that already existed.  There were also efforts to conserve the limited water of the desert.  The original Spanish city planners set out Santa Fe around a central plaza containing the Palace of the Governors and the Cathedral of St Francis of Assisi. 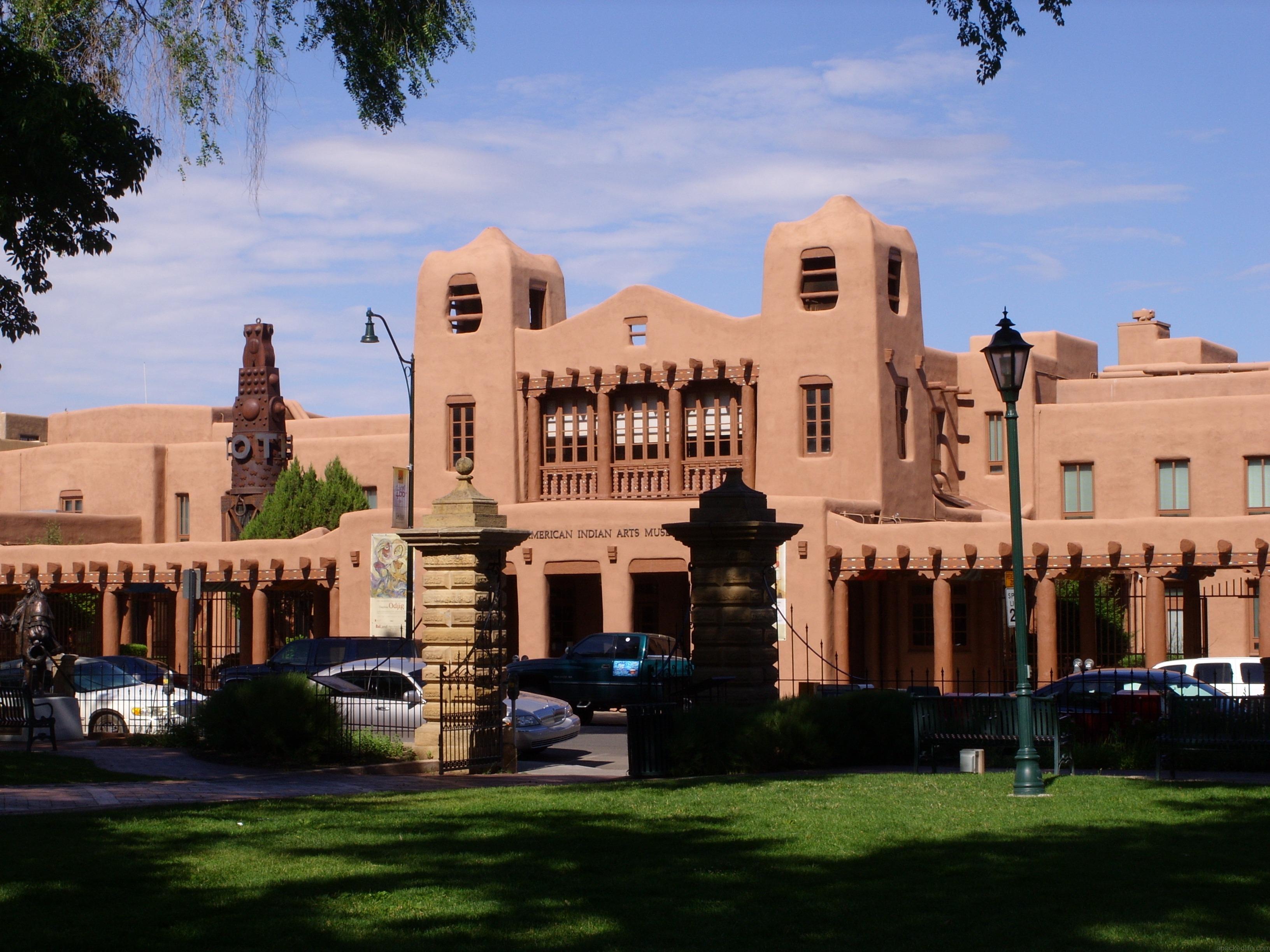 The city’s been built in a unified style, the Pueblo Revival look, with features borrowed from old adobe homes and churches, along with earth-toned stucco facades.  It’s a UNESCO creative city, and one with a thriving arts scene.  This is a place I’d imagine it would be easy to find your creativity.  It has a magical feel, and if you visit at Christmas when there are rows of paper lanterns on the walls, it’s like nowhere else. 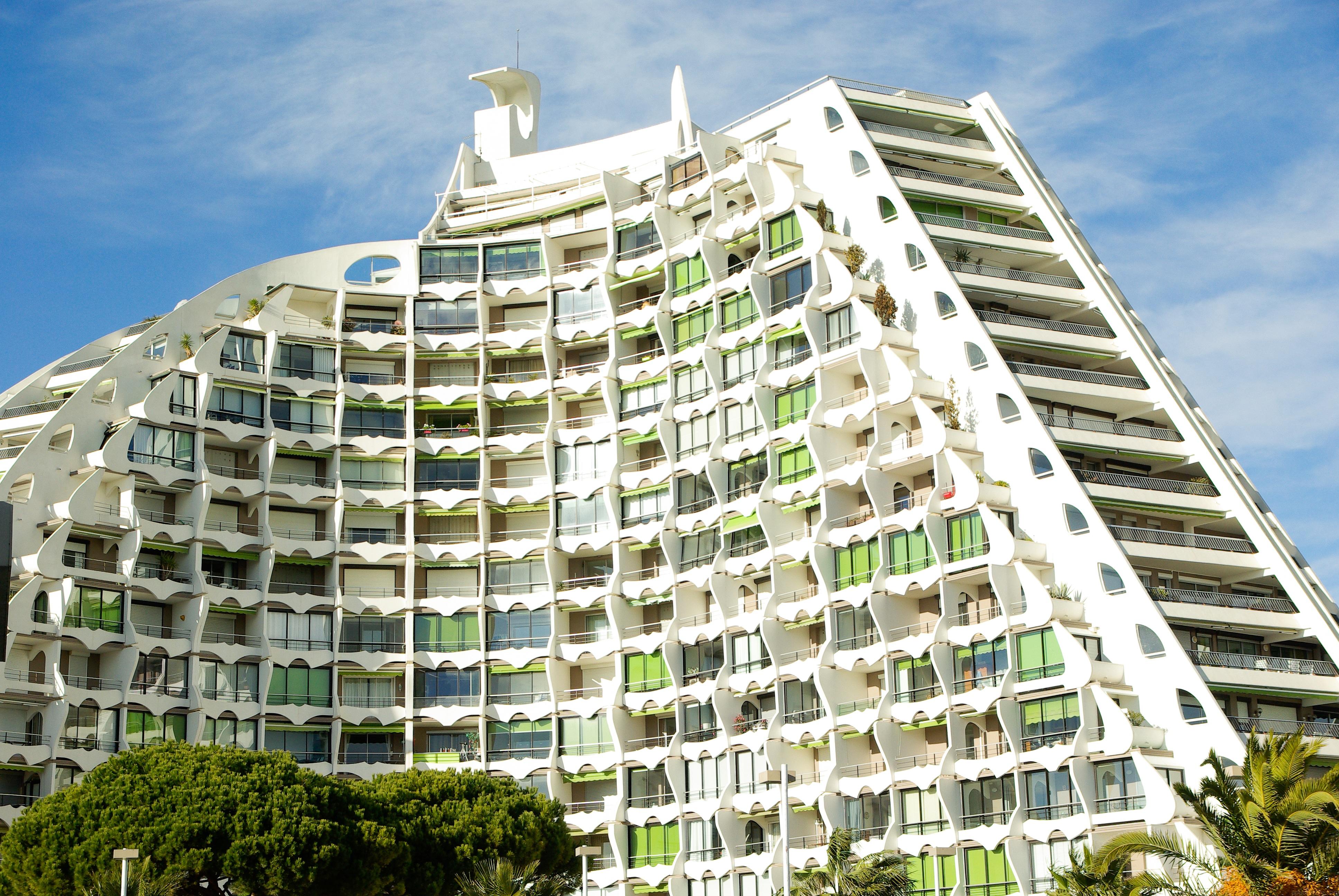 I came here a lot as a child, after a rather lengthy drive from the ferry port to Heurault.  Just south of the Crusader town of Aigues-Mortes, La Grande Motte was built in the 1960s and 1970s to a futuristic design, mostly focused around pyramids and wheels.  Since we used to visit, it’s become ever more loved by the French as a beach destination, and now has 2 million visitors a year. 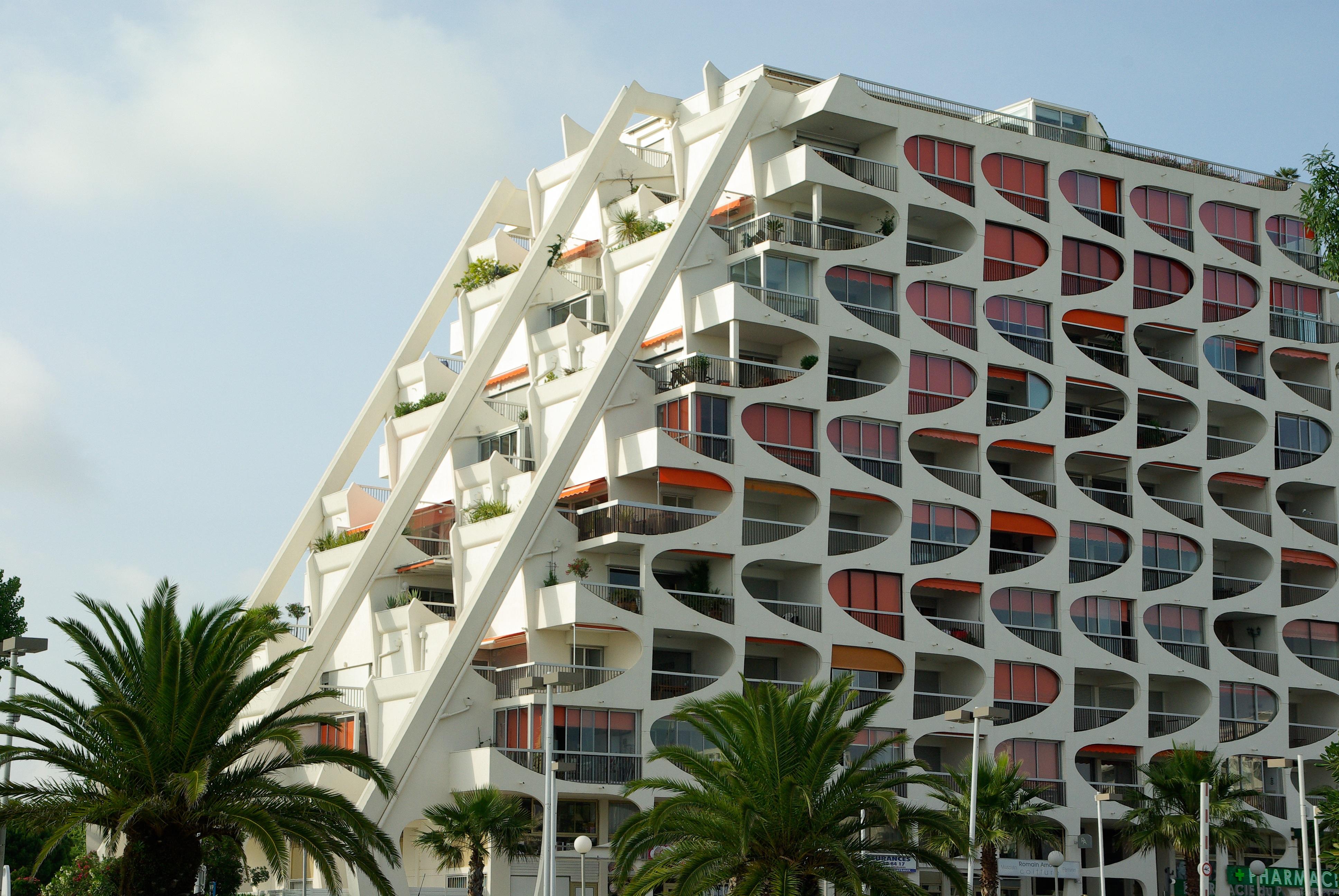 The first impression you get of La Grande Motte is of the extreme whiteness of all the buildings.  Then you start to notice the shapes, mostly pyramids, although some are truncated, and some moving in a sweep to make a slope rather like a rollercoaster.  I remember being entranced by these alien forms of architecture.  They contrast beautifully with the blond sand and azure sea.  The shock of moving from the historic architecture of Aigues Mortes also seems to make La Grande Motte more memorable. 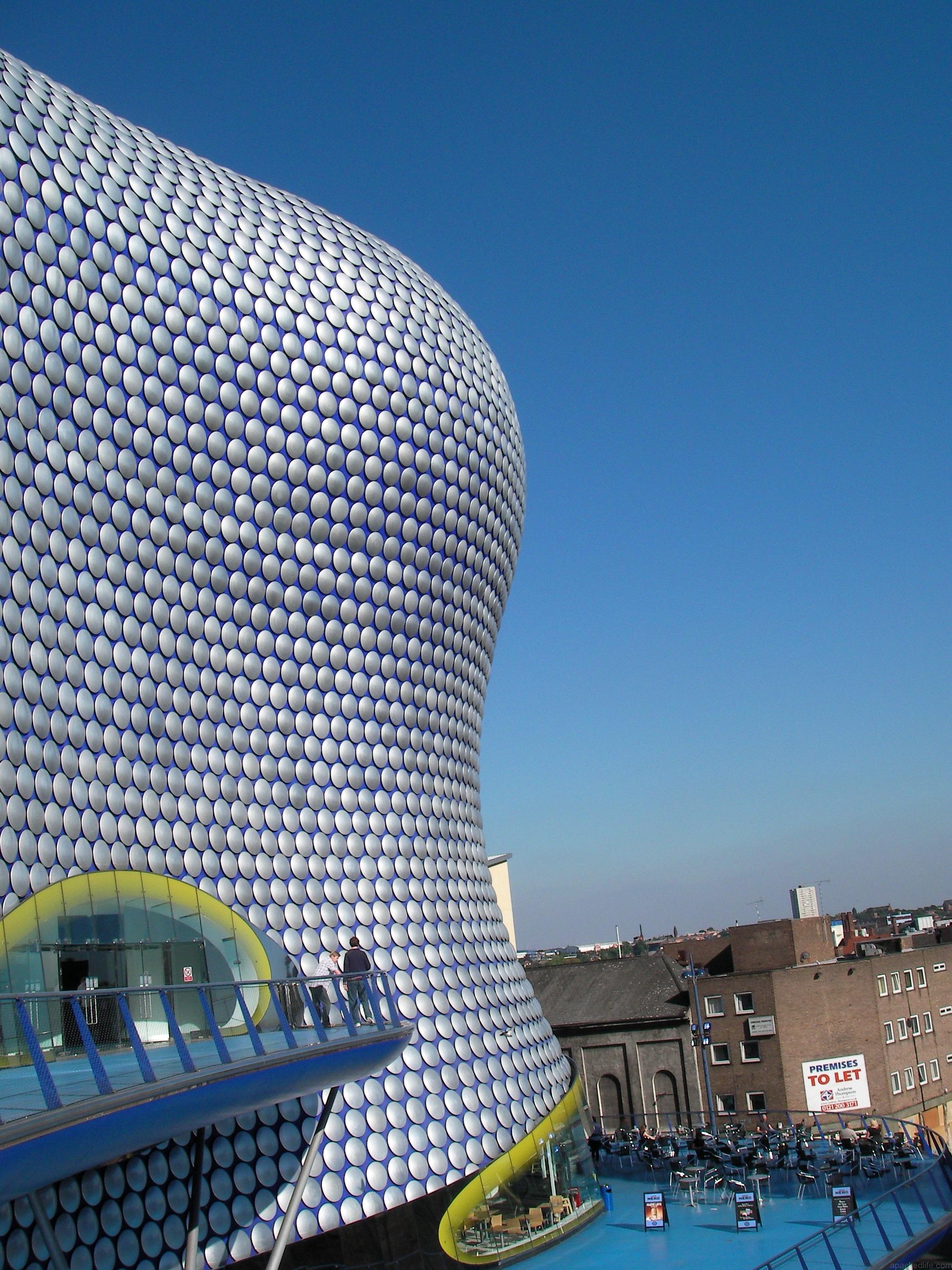 Birmingham‘s a big city, with its roots firmly in the Victorian splendors that came from the Midlands Enlightenment and the Industrial Revolution.  It has some glorious civic buildings dating from that period including the Council House, and the colonnaded Town Hall.  It’s well worth walking around the area of Colmore Row, Bennetts Hill and Cornwall Street to enjoy the magnificence of Victorian Birmingham. 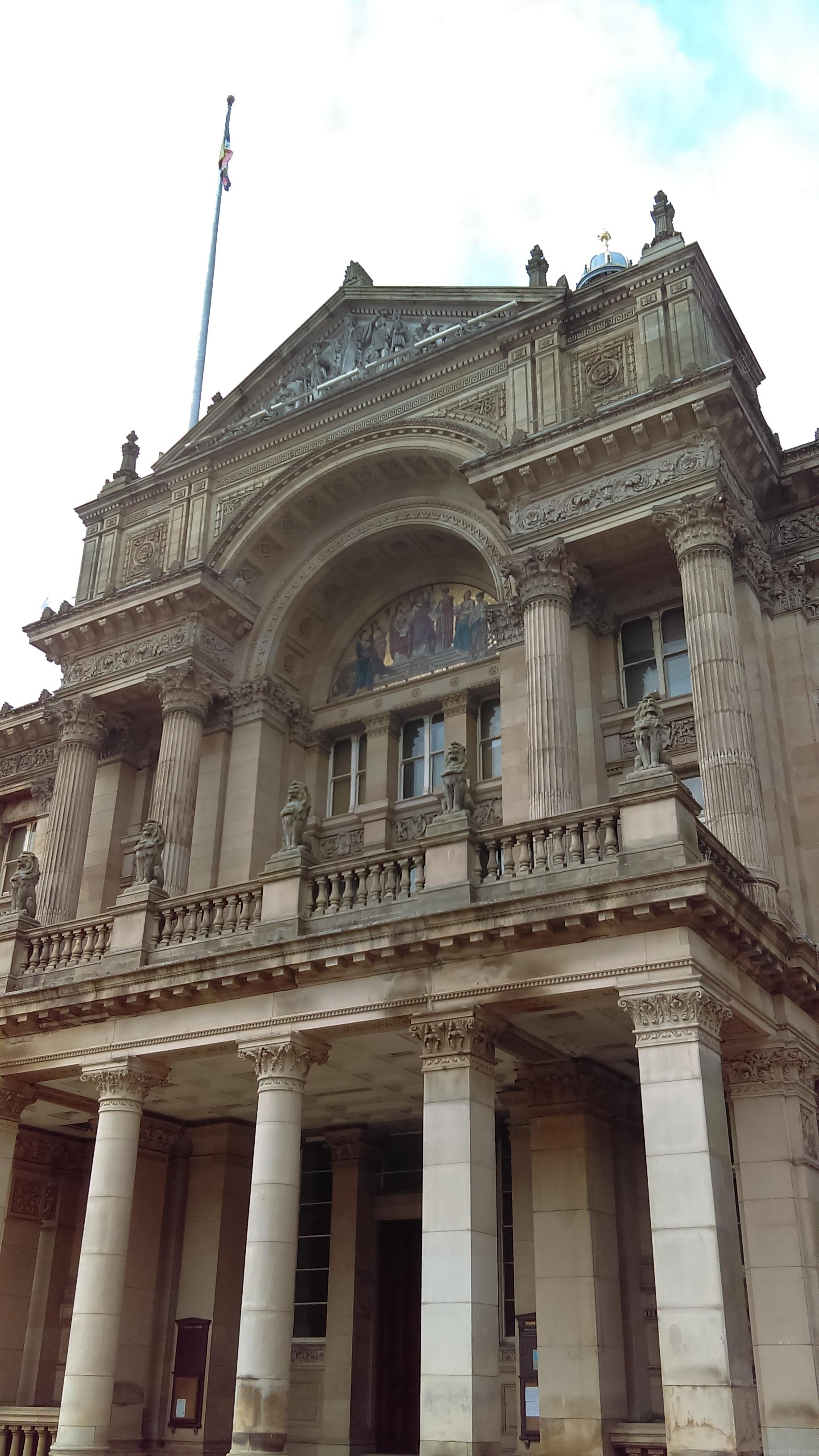 But alongside those beauties, Birmingham has made some brave architectural decisions about its new inhabitants.  There’s the iconic Selfridges building, formed of silver metallic discs against a bright blue background in a shape said to resemble a tight sweater.  Then there’s the new Library of Birmingham, commissioned to replace its former brutalist sibling.  The new Library has been described as a wedding cake, with a stack of layers, all caged in a beautiful floral design.  Whether you love or hate the additions to Birmingham’s skyline – and I’m a lover not a hater – you can’t deny that the city planners have architectural bravery. 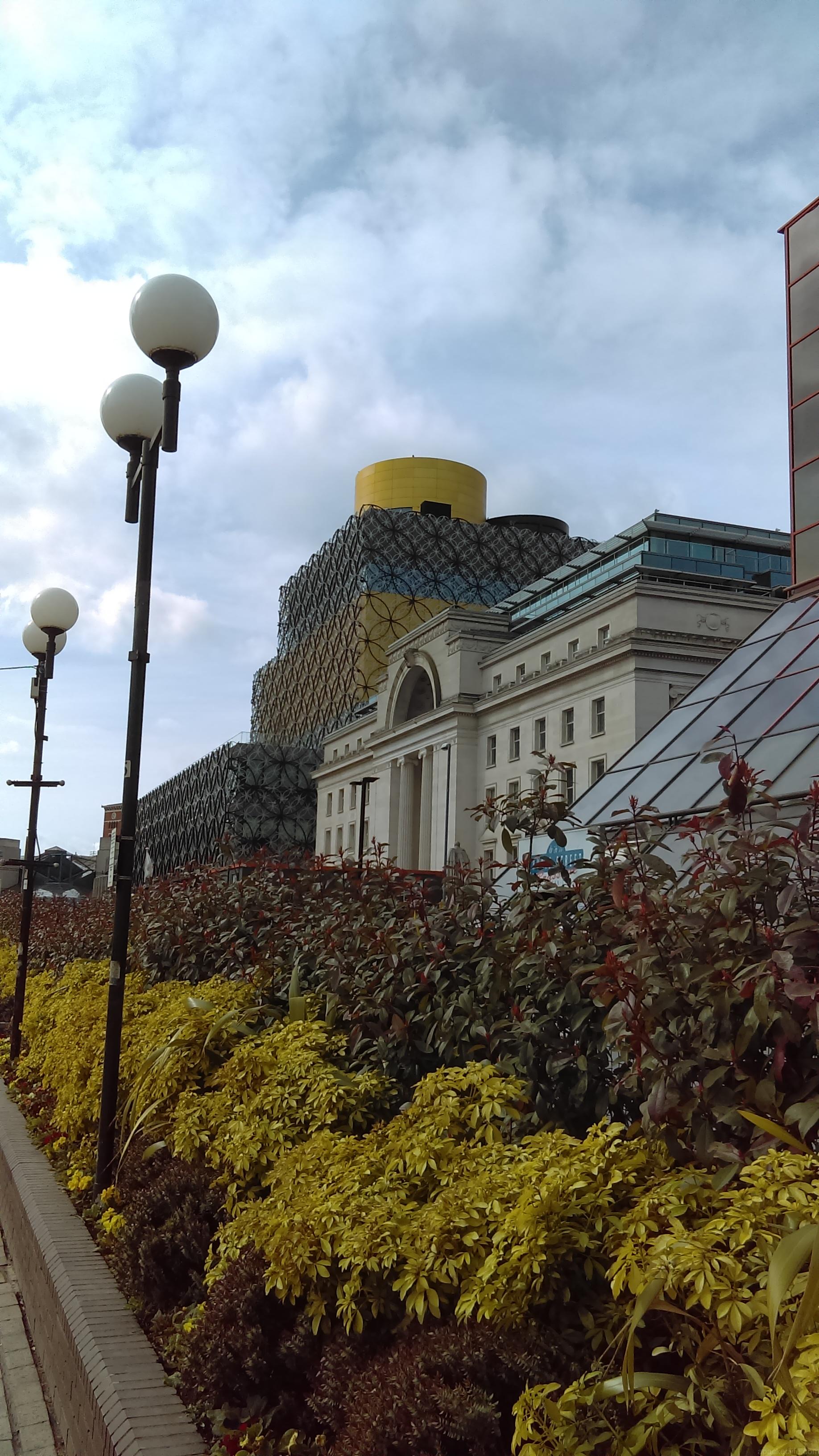 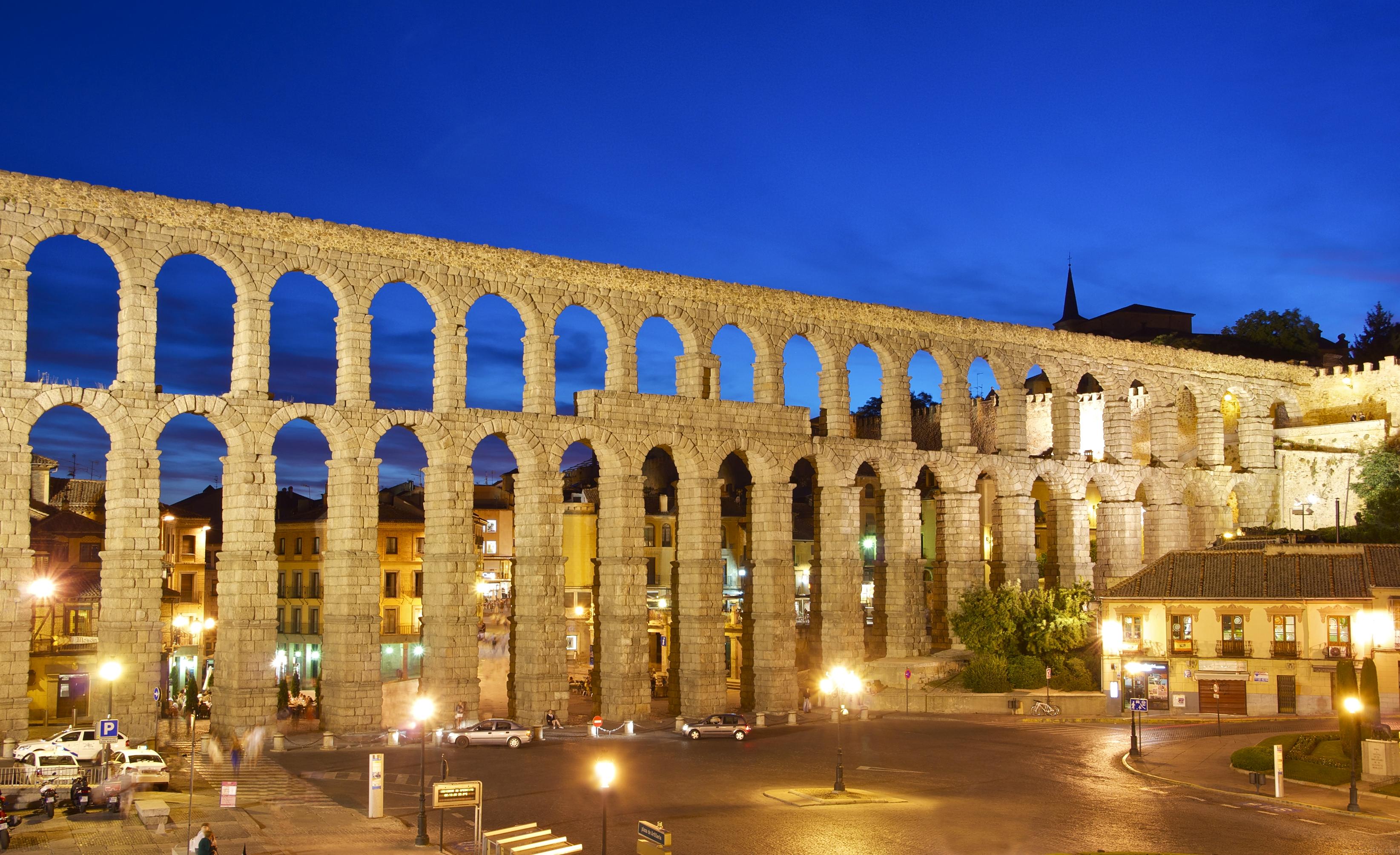 One of the first sights to overwhelm you in Segovia is its magnificent Roman aqueduct.  It dates from the late first or early second century and still delivers drinking water to the city.  That’s some impressive engineering.  The granite blocks that create it are held together without mortar, and the aqueduct is the best part of a kilometer long. 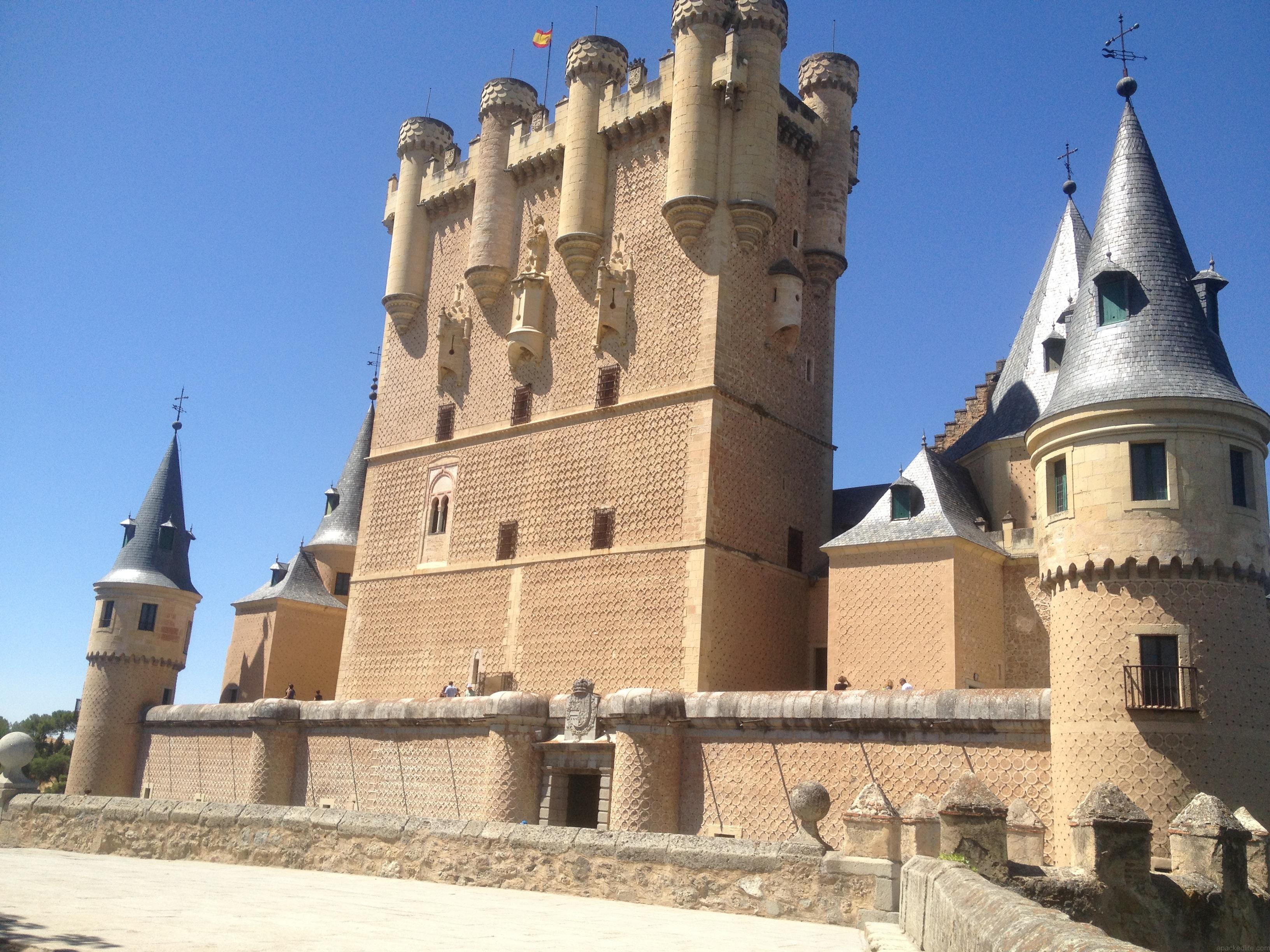 Then there’s the Alcazar, the Royal Palace.  I remember the atmospheric walk to the top of the building here, up steps so profoundly trodden over the centuries that they dipped in the middle.  I can still feel the cold chain that served as a handrail under my palm.  Then you have the cathedral, the last Gothic cathedral to be built in Spain, which has 18 chapels. 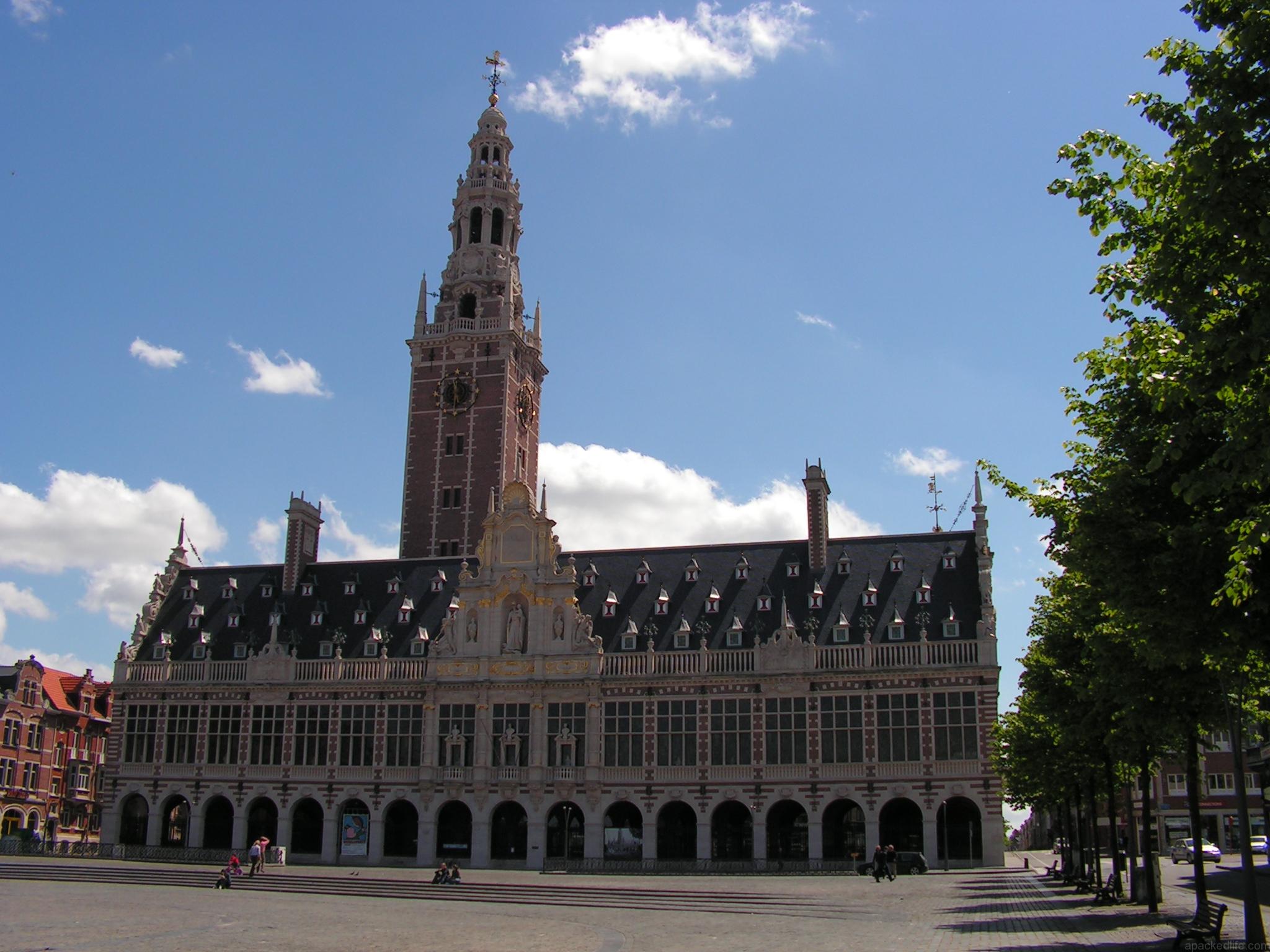 Leuven has a massive student population, and some of its seats of learning are architecturally wonderful.  The University Library was gifted by the Americans after World War I, and has a bell tower with one of the largest carillions in the world.  Leuven’s Beguinage is a UNESCO World Heritage Site, as is St Peter’s Church as one of the Belfries of Belgium and France. 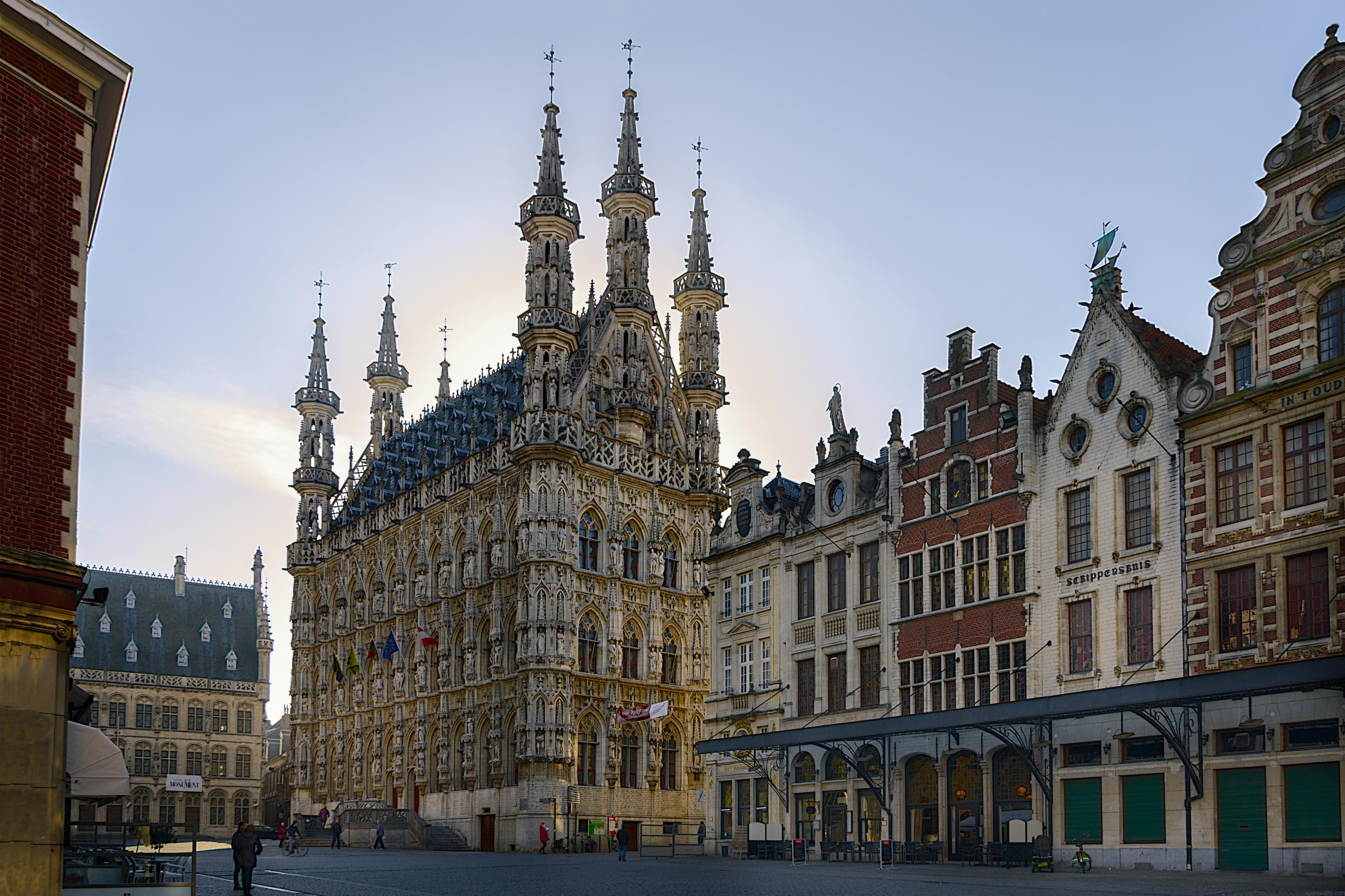 Then you’ve got Leuven Town Hall.  It’s an extravaganza of a building, ornately decorated and with more than two hundred statues of nobles, saints and locals.  You can visit to appreciate it from within too, and occasionally from cellar level via special tours. 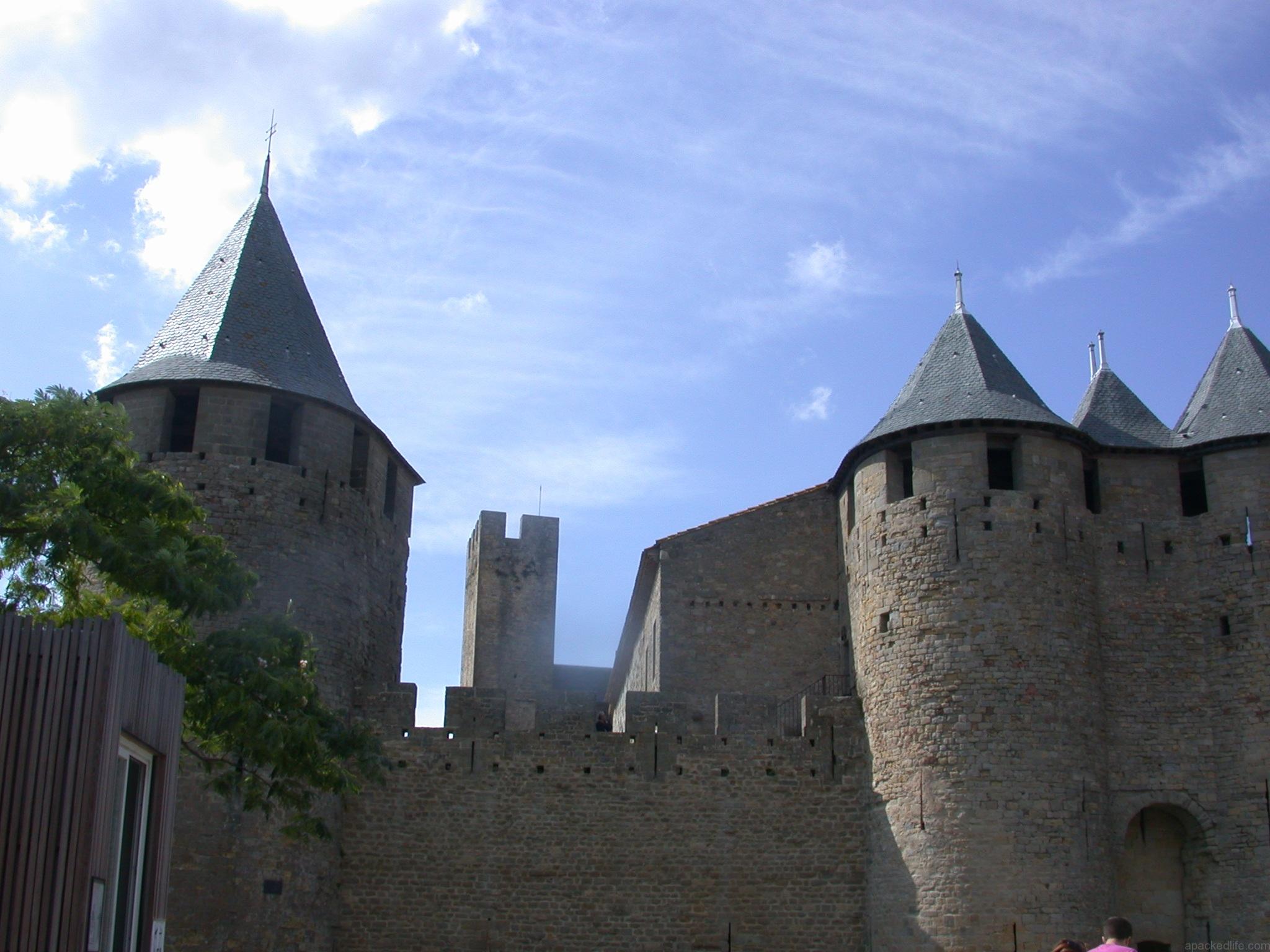 Carcassonne is a fortified city, on an important trading route linking the Atlantic to the Mediterranean.  As such, there has been settlement here since Roman times.  Le Cite, as the walled part is known, is a medieval fortress restored in 1853, and added to the list of UNESCO World Heritage Sites in 1997.

When I first visited Carcassonne, I had an irresistable urge to pull up the castle drawbridge behind me and hunker down.  It’s an incredibly atmospheric place, with two outer walls and 53 towers to keep marauders at bay.  I’d urge you to see it both on a sunny day when you can appreciate its magnificent construction, and then on a wild night under a stormy sky. 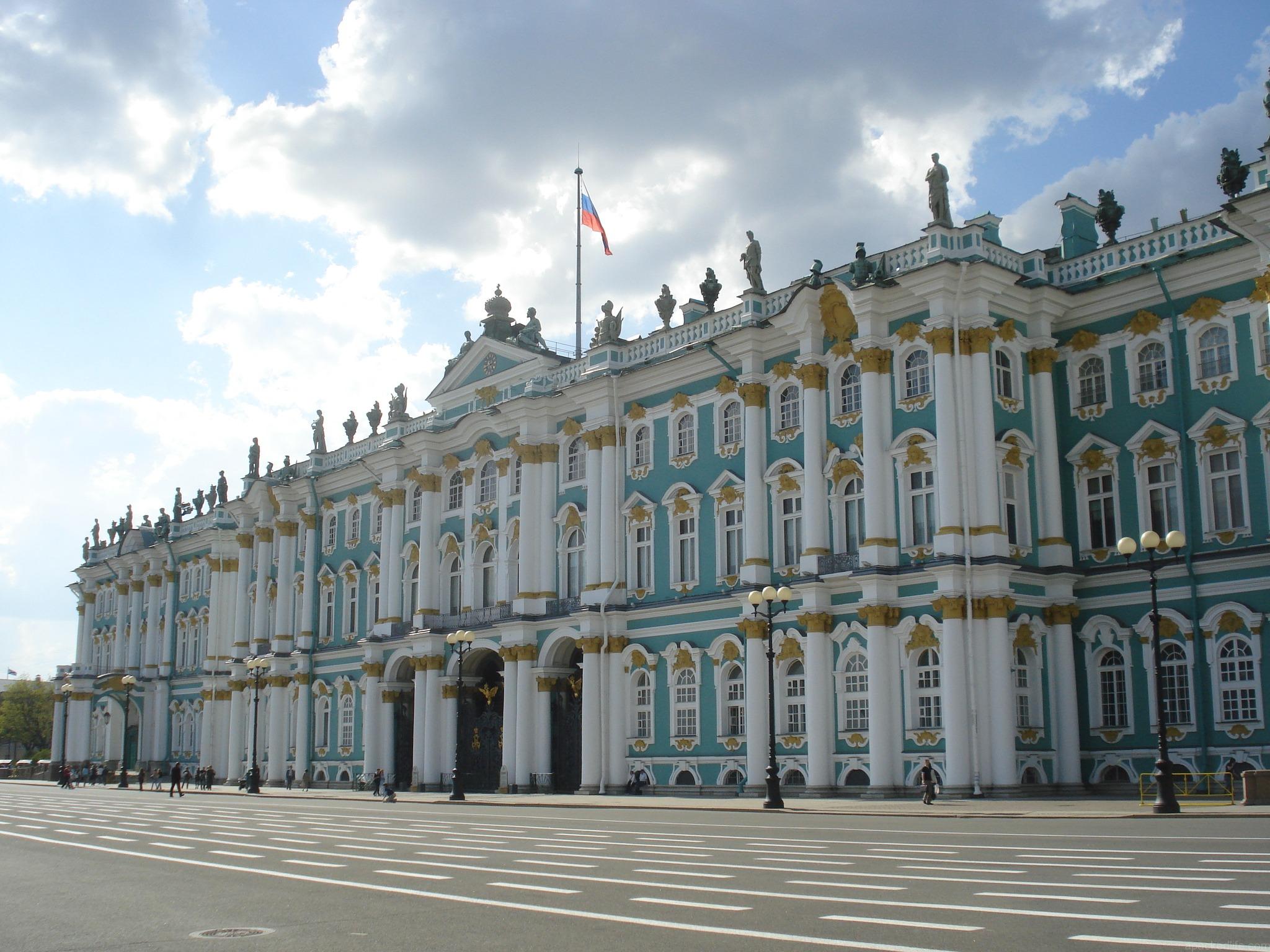 If ever there was a place where your eyes would struggle to take it all in, then St Petersburg must be it.  It’s got everything from the glorious cerulean blues of Catherine’s Palace, with the only gates to have ever induced gate envy in me, to the full on excesses of Peterhof.  In short, its architecture must have a vat of espresso every morning to be this powerful. 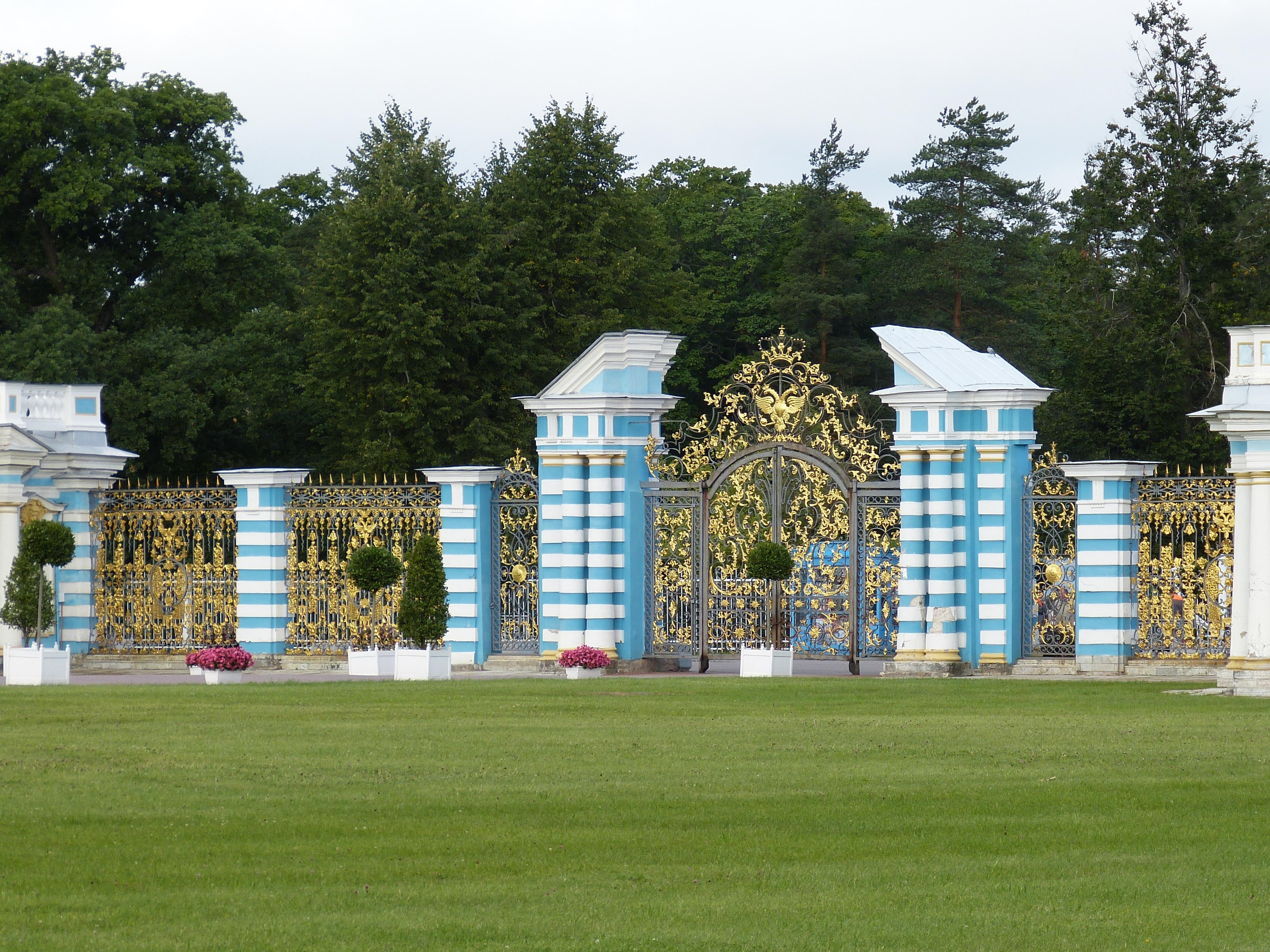 However long you spend exploring here, you’ll have the sense that it wasn’t enough, and that there are things still to be seen or appreciated further and in more detail.  My advice?  Just appreciate the small bits you love, whether it’s a trick fountain at Peterhof or those extraordinary blue and white gateposts. 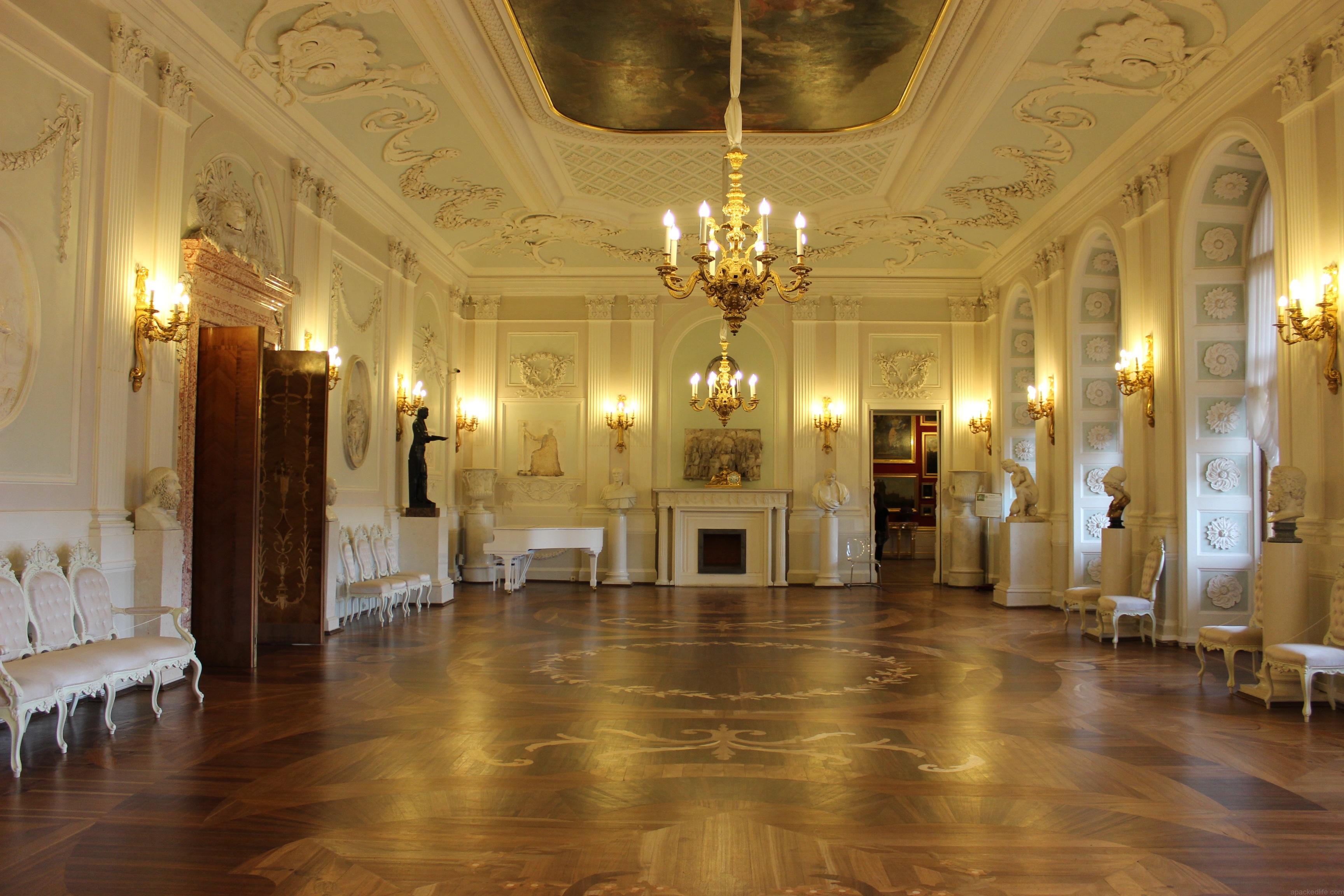 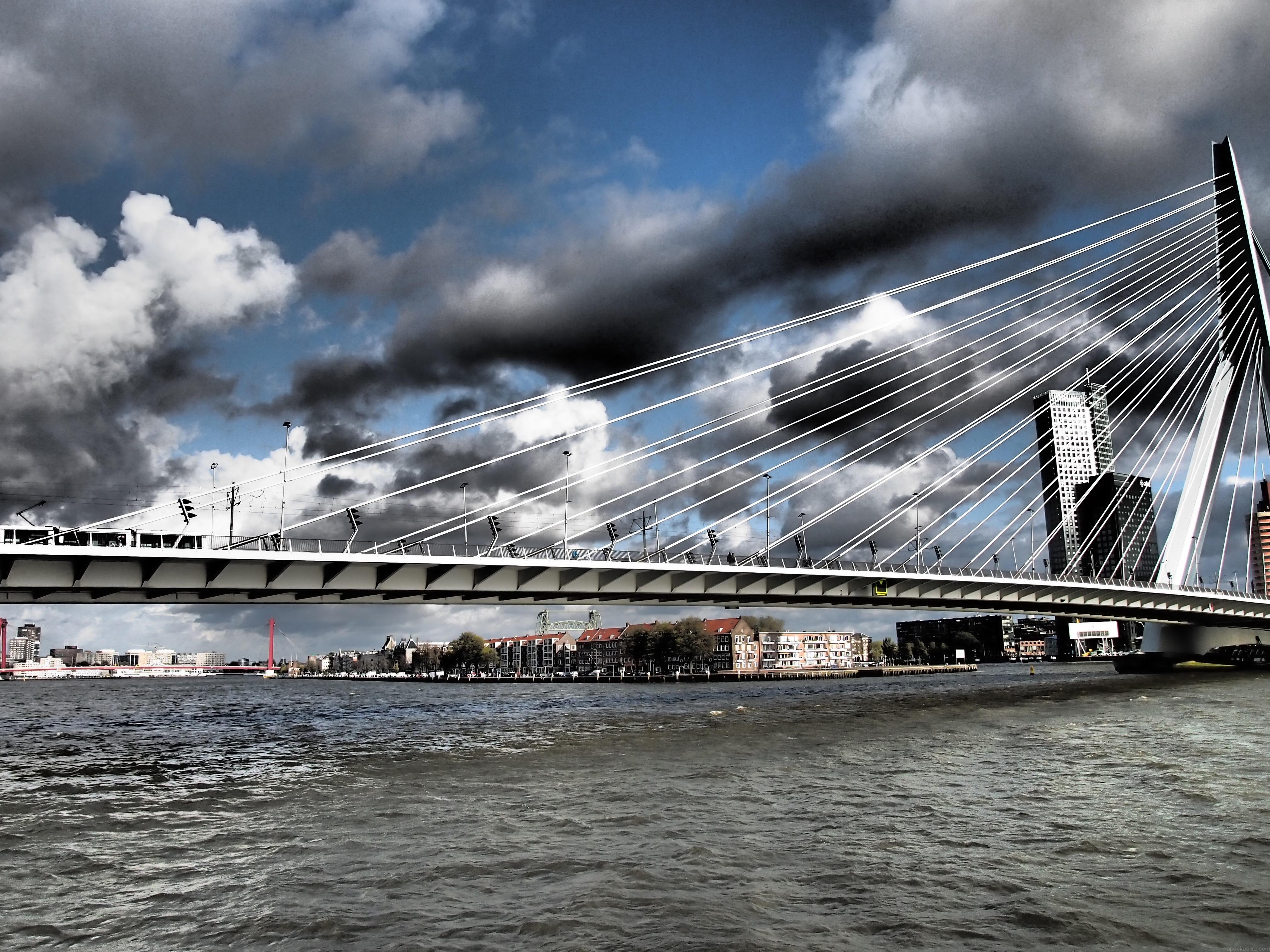 Rotterdam is Europe’s largest port, with access to the North Sea from the Rhine-Meuse-Scheldt river delta.  World War II saw near destruction of the city centre, from which emerged a varied architectural landscape.  Here, unlike many other Dutch cities, you have skyscrapers making fabulous chunky blocks against the machinery and facilities of the port. 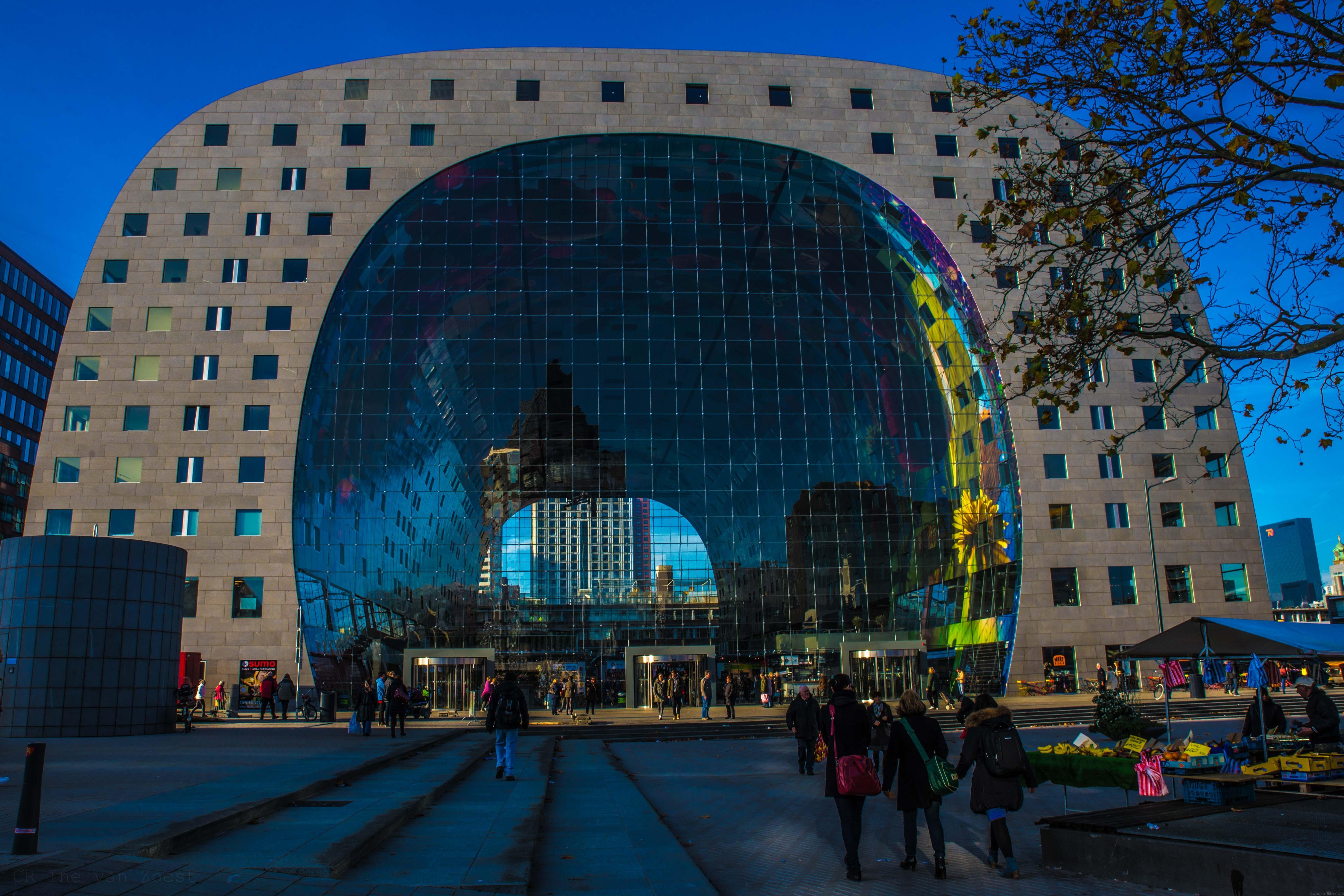 Rotterdam has clocked up some impressive architectural achievements.  The high rise office building the Witte Huis was the tallest office building in Europe at the time of its construction.  Amongst the newer constructions are the iconic cube houses by Piet Blom, and the Erasmus Bridge, commonly known as the Swan. 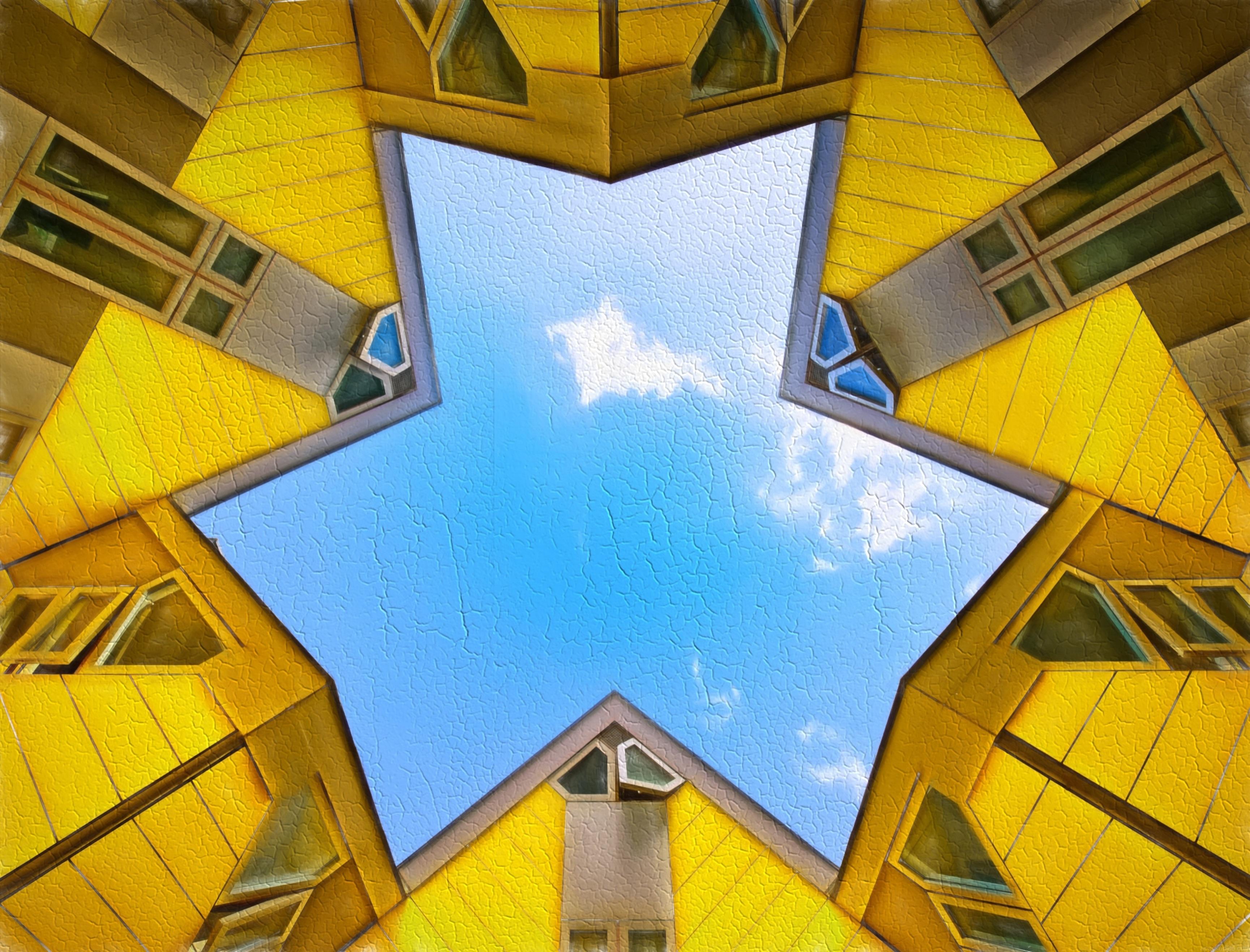 Barcelona: From Gothic To Gaudi 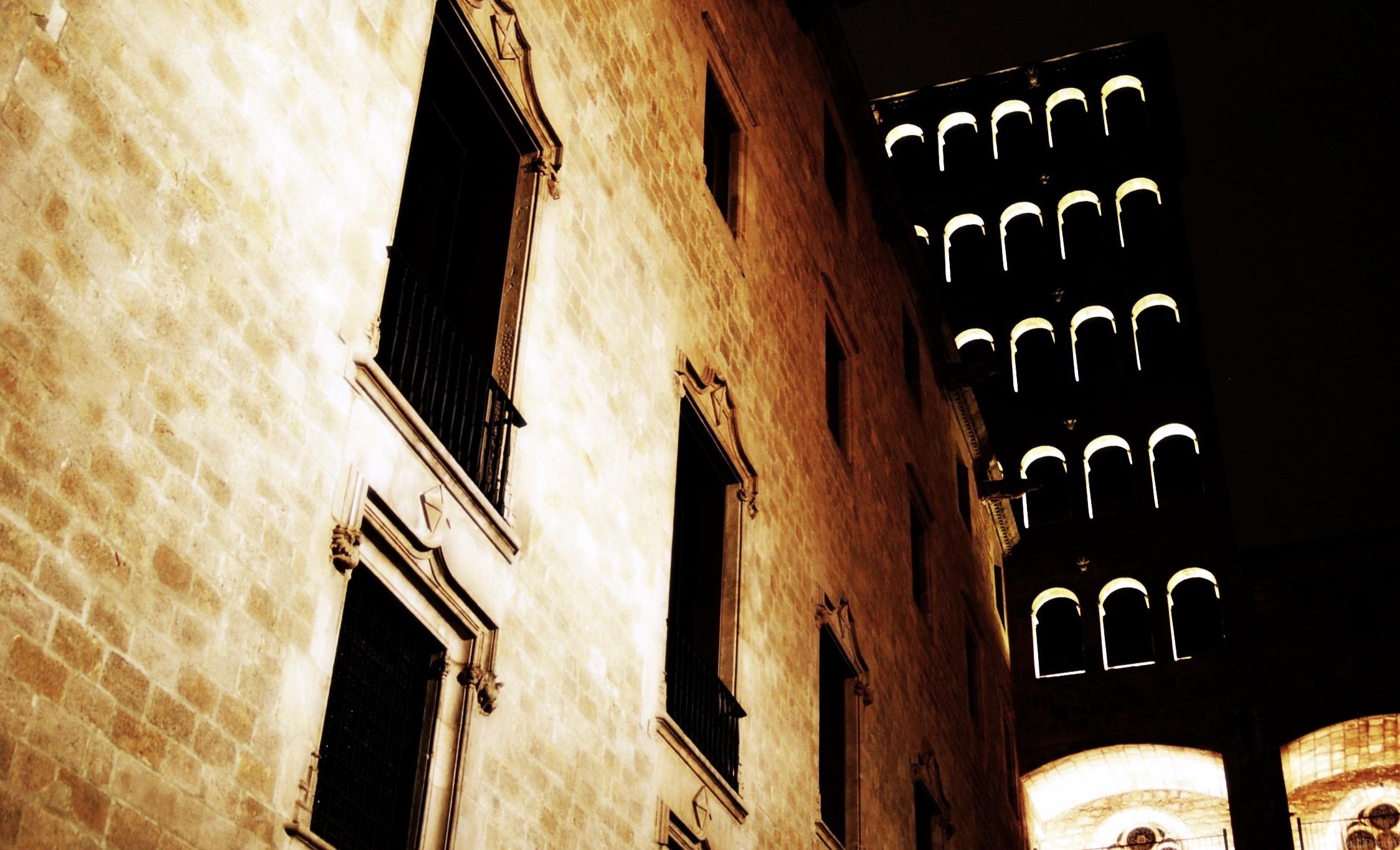 It would be difficult to justify not including Barcelona in any collection of architectural stunners.  The Gothic Quarter itself, dating back to medieval times, also has some buildings of Roman origin.  There is plenty of Catalan modernista architecture (the equivalent of Art Nouveau), with several of these buildings being World Heritage Sites. 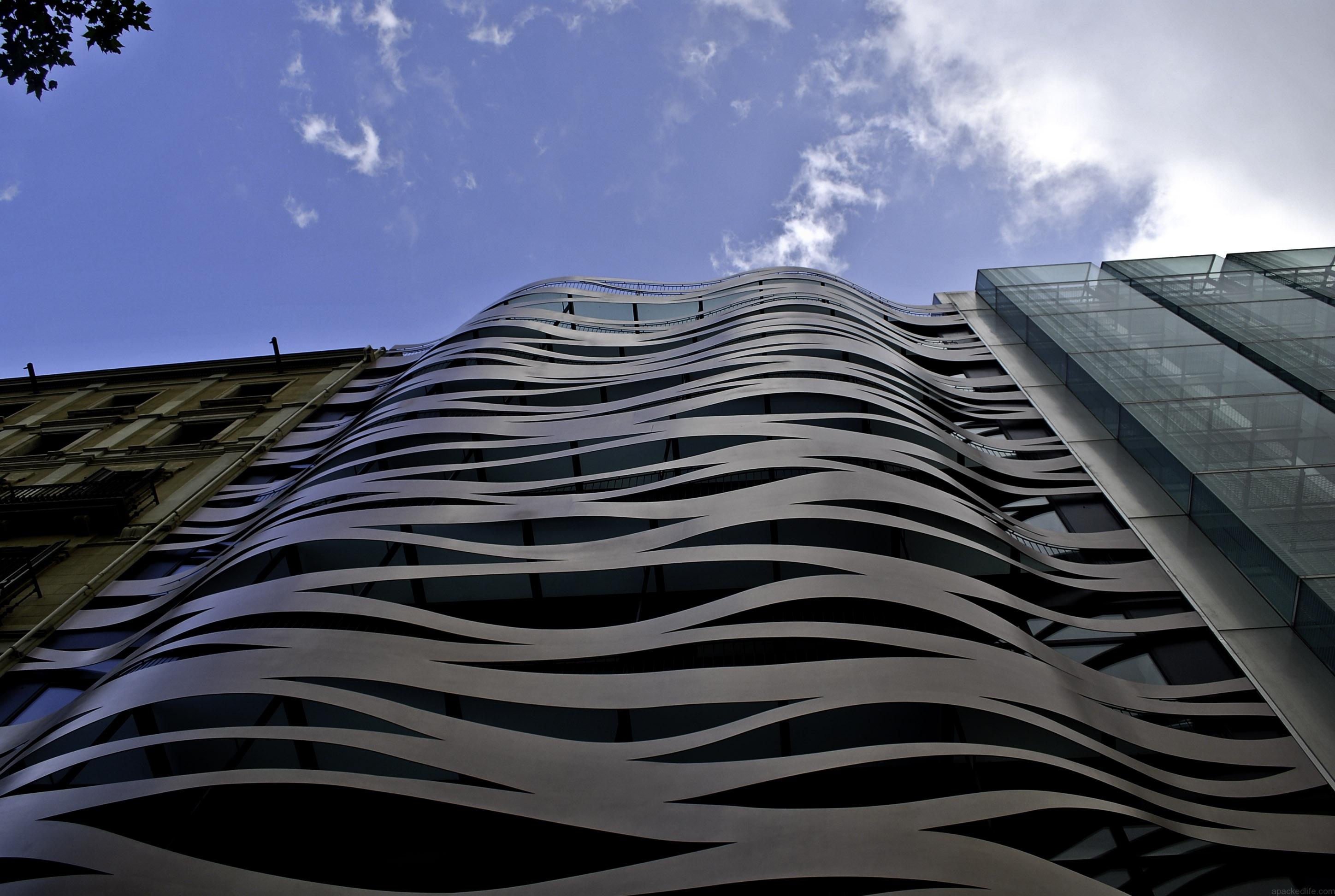 Then there’s Gaudi.  Imagine that you’ve been to a match at the Nou Camp.  You’ve walked a long, hot and dusty way back to your hotel.  You have blisters on your blisters, and you’re getting slightly scratchy with your new bloke.  Then you round a corner, and the magnificence of Gaudi’s sugared almond confection overtakes you.  It’s so gorgeous that little else matters, and all was once again right in my world.  If you’ve seen Gaudi’s work in pictures, I urge you to see it in the flesh. 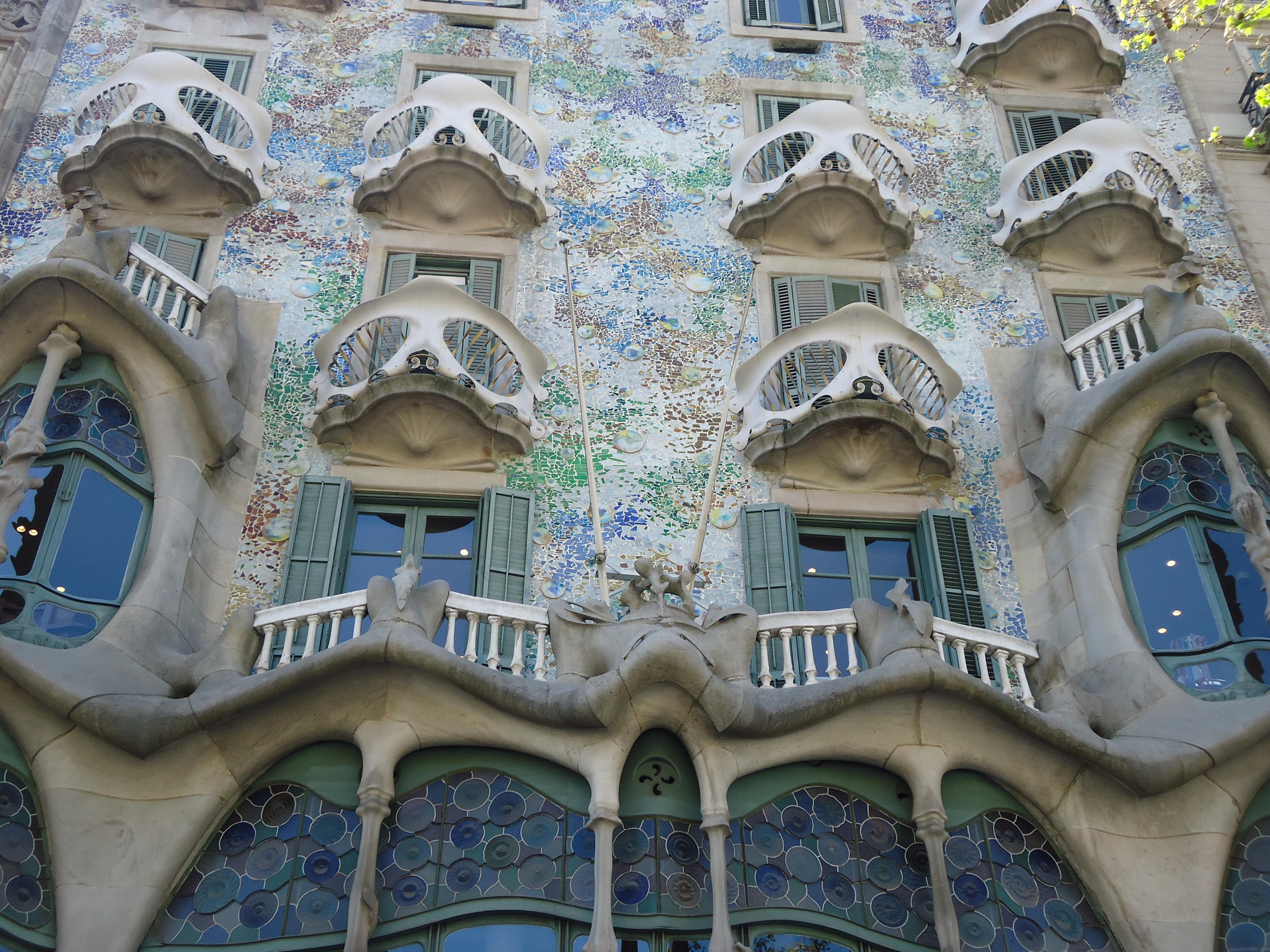 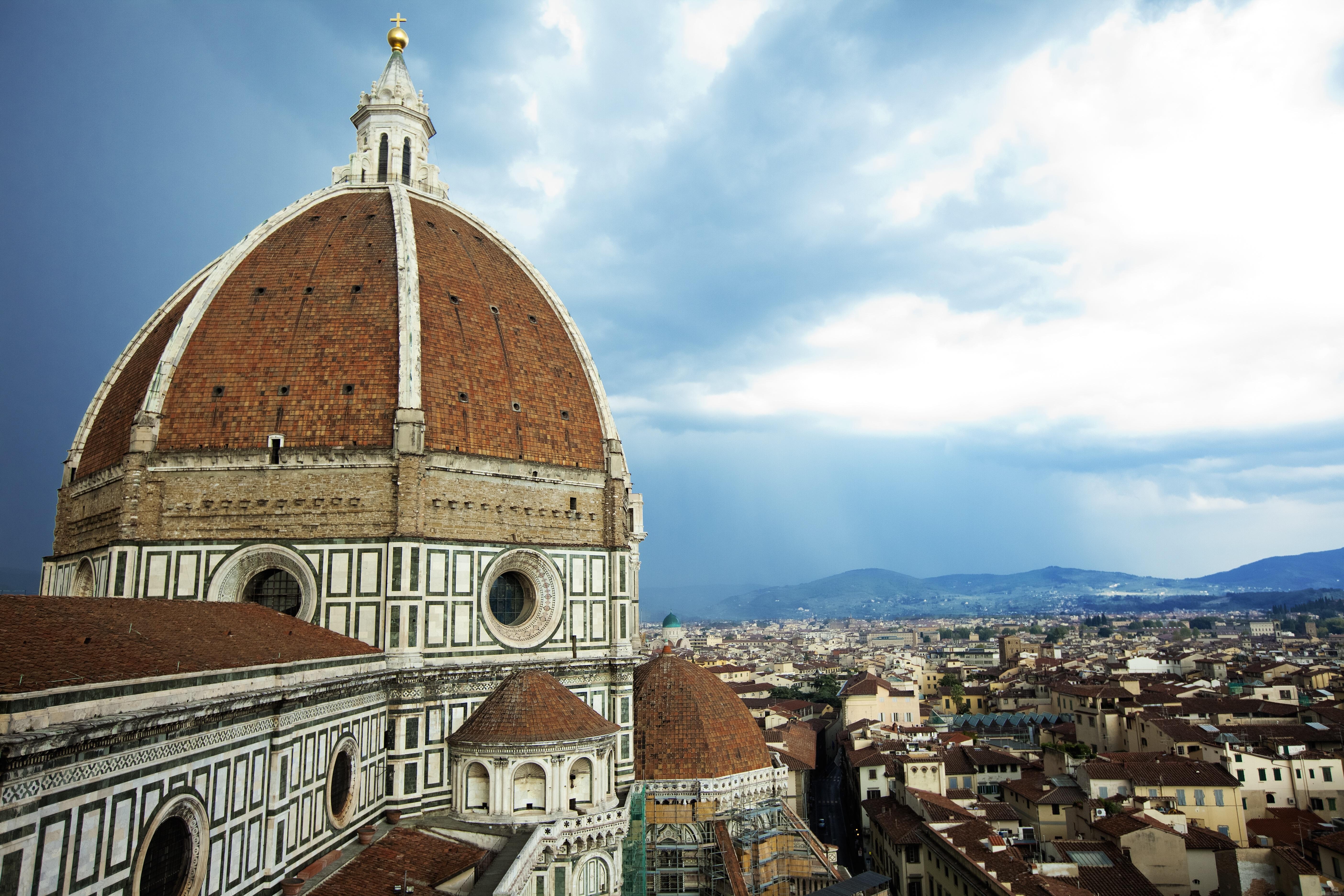 Florence is believed to have the greatest concentration of art –  in relation to its size – in the world.  The same passion for beauty has influenced its architecture over the many, many years that Florence kept growing ever more distinctive. 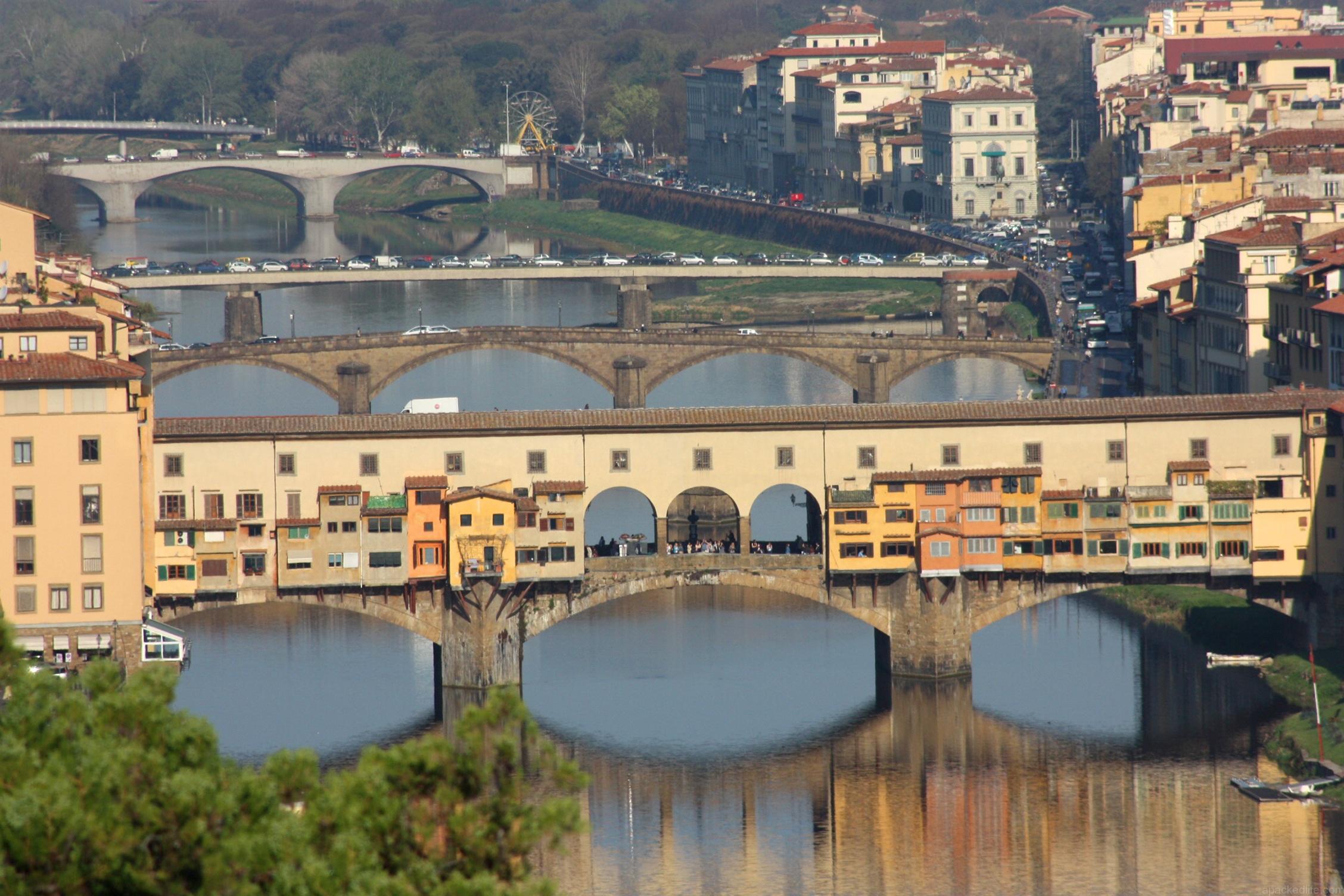 You’ve got galleries, you’ve got museums, you have the palaces, the Duomo, the churches stuffed with art, the bridges…  Even the main station – a rationalist design by Giovanni Michelucci – is magnificent.  Like St Petersburg, Florence is full on overload for the eyes, and indeed all the senses.  Breathe deep, accept you’re not going to see it all, and enjoy this amazing place in bite-sized chunks. 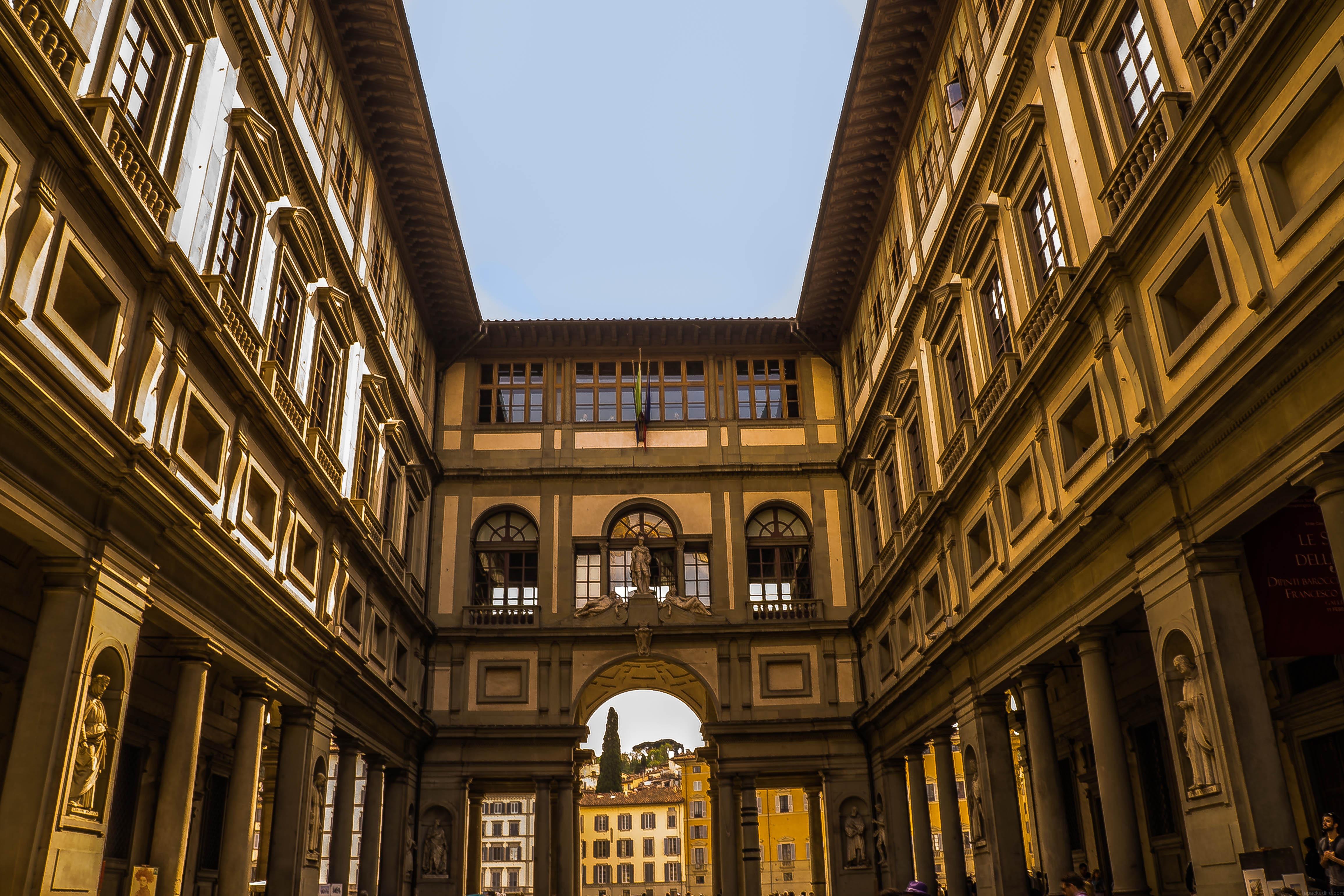 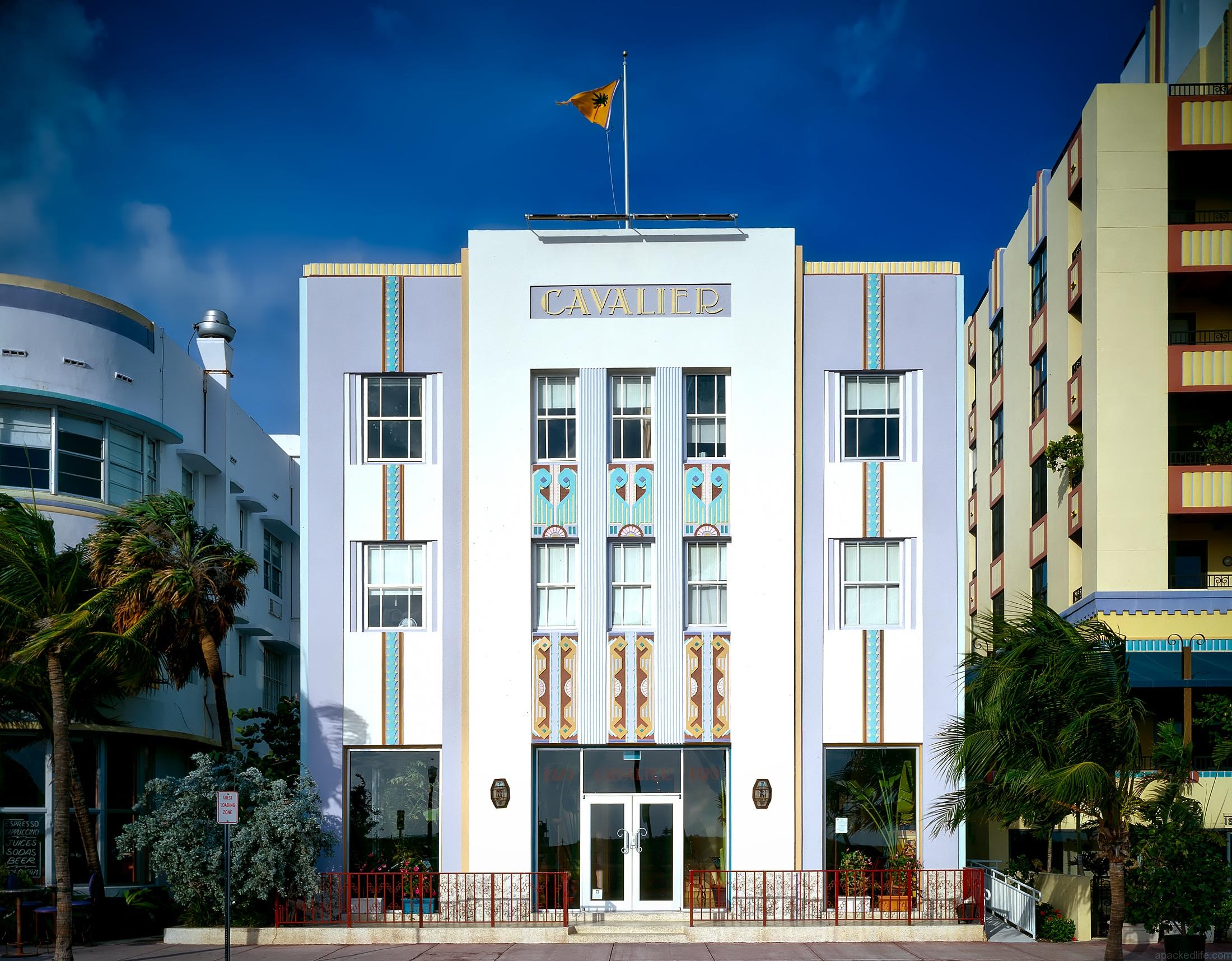 Although Miami has the third tallest skyline in the USA, it’s still stuffed with Art Deco treasures, mostly around Miami Beach and Ocean Drive.  The hotels and resorts in particular strongly feature Art Deco style in places like the Tides Hotel, the Delano South Beach and the National Hotel in Miami Beach. 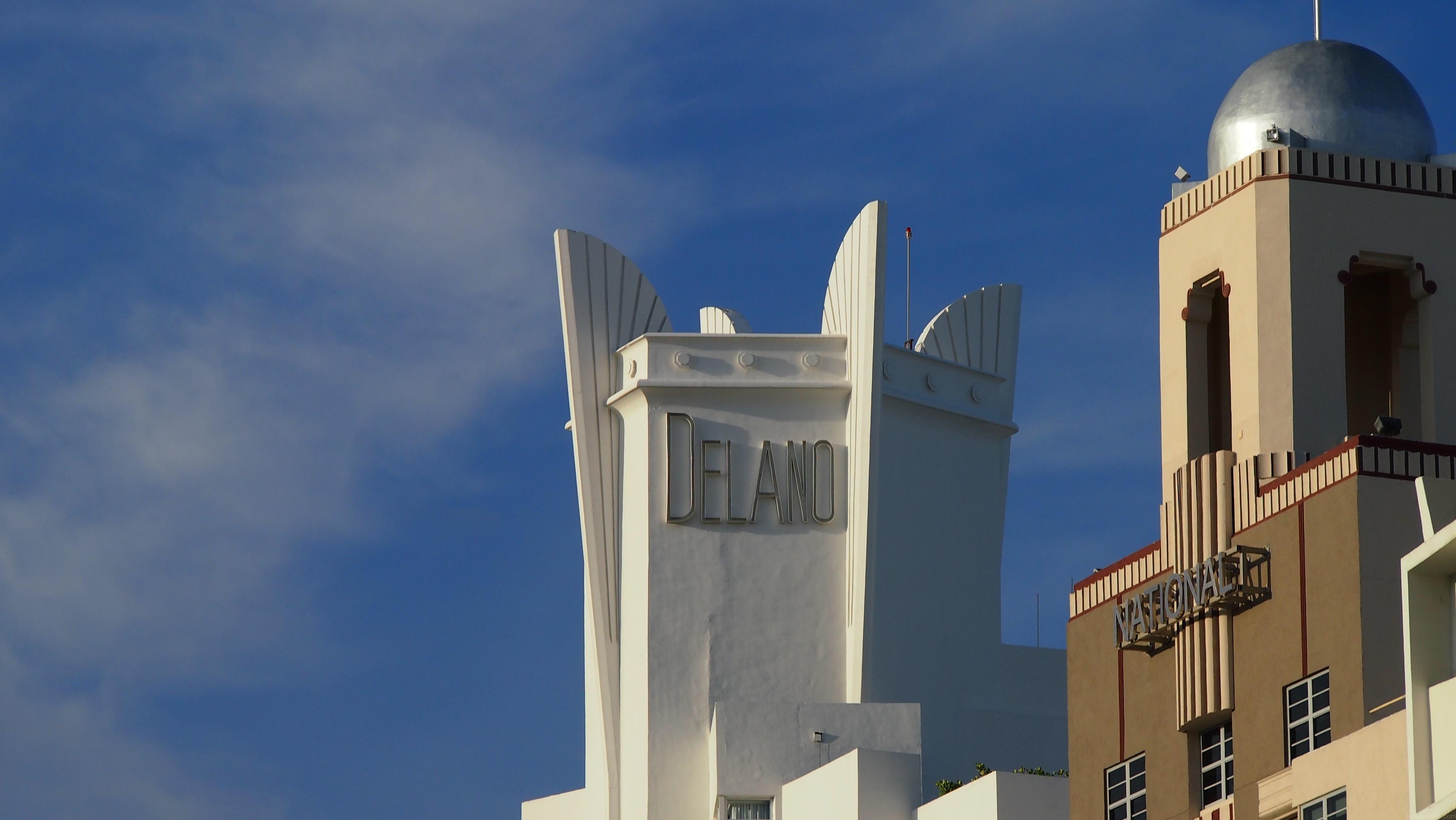 Art Deco remained popular in Miami Beach until the late 1940s, much later than elsewhere in the USA.  Here you’ll find the Miami Beach Architectural District, where the hotels have been preserved, and many restored to their original glories.  No building is higher than 12-13 stories, and they feature clear geometric shapes, often with a central tower.   Here you’ll find a palette of pastel colours alternating with while stucco, and decoration of herons, sea shells, palm trees, sunrises and sunsets.  Neon lighting by night highlights the features. 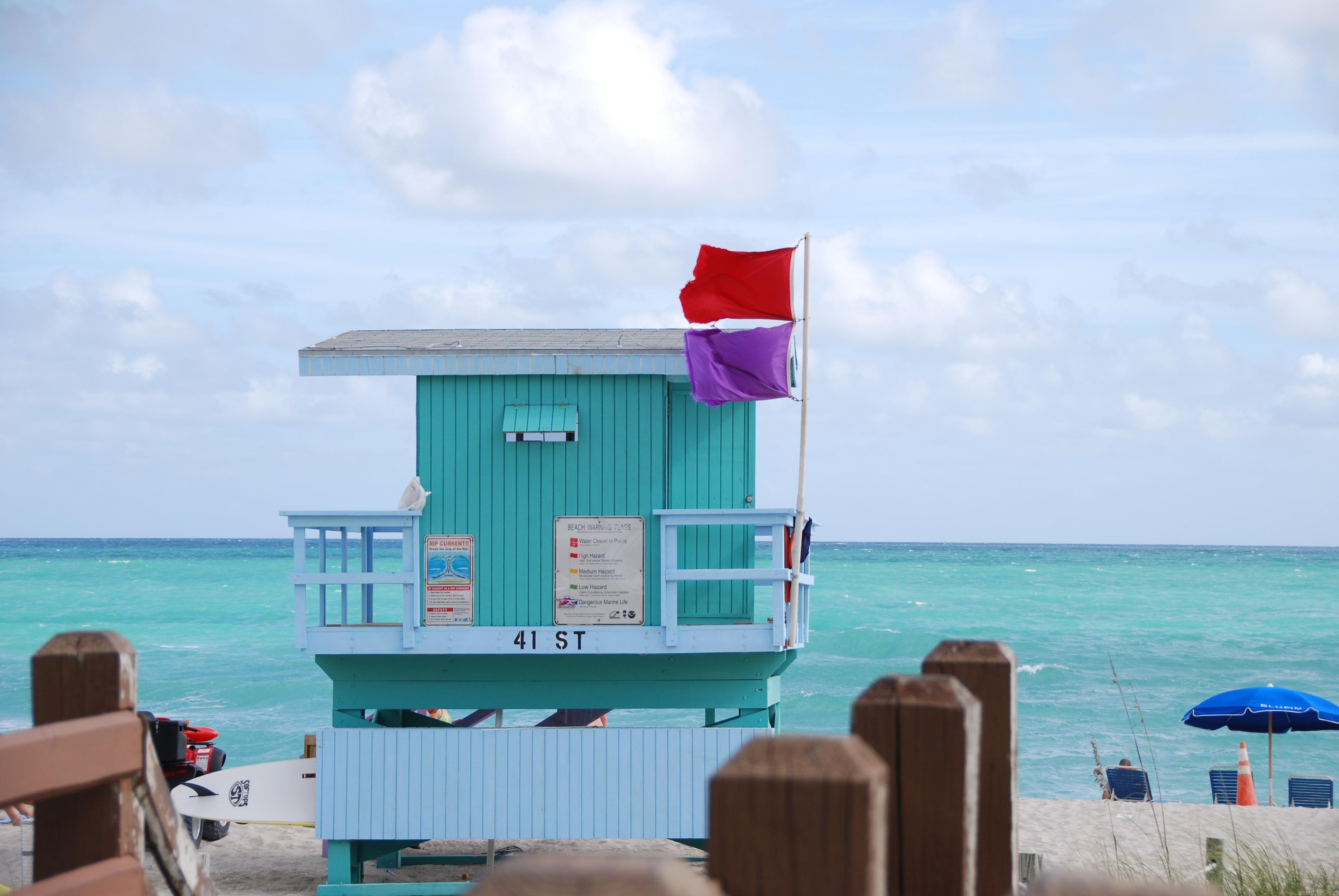 If you’re a fan of architechture, you might like to try Archilovers, who showcase a lot of design. 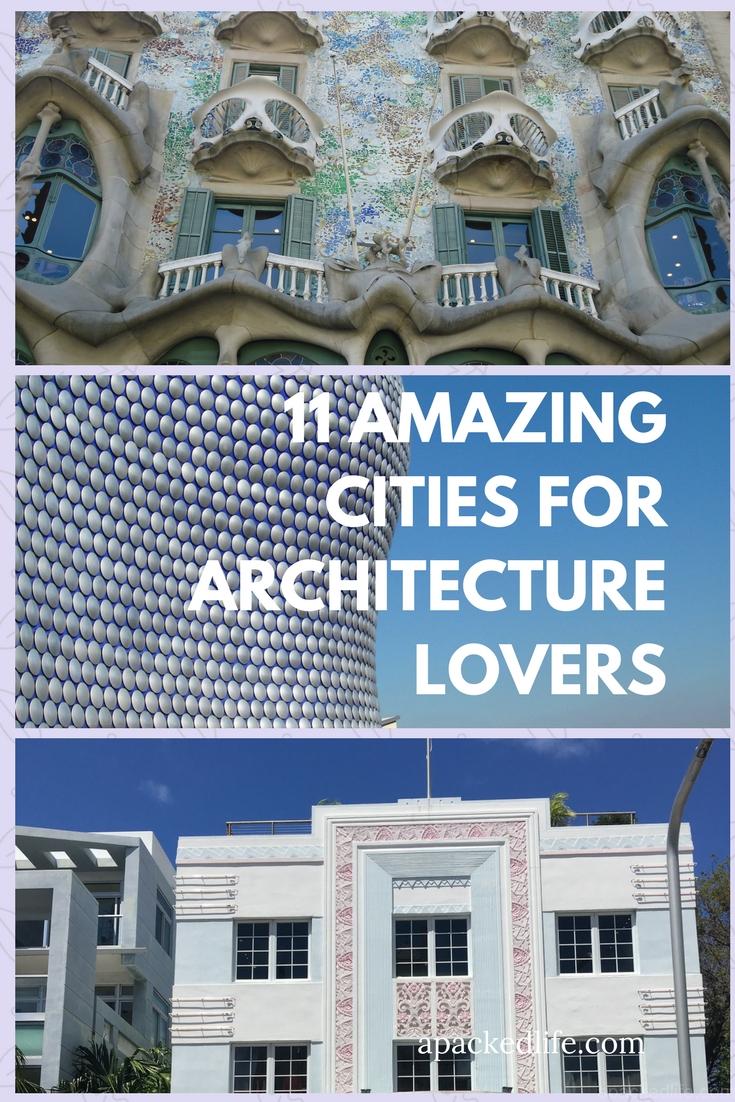