If you are one of those people who hasn’t yet had the opportunity to discover Shropshire, then I say lucky you.  There’s so much beauty ready for you to see.  This tranquil and stunning county has all kinds of surprising and interesting places to explore.   There’s the village that inspired the concept of the modern Olympic games, a medieval town with two bridges – one English and one Welsh – and more glorious countryside than you have miles in your walk.  And did I mention two UNESCO World Heritage Sites?  Let’s get going. 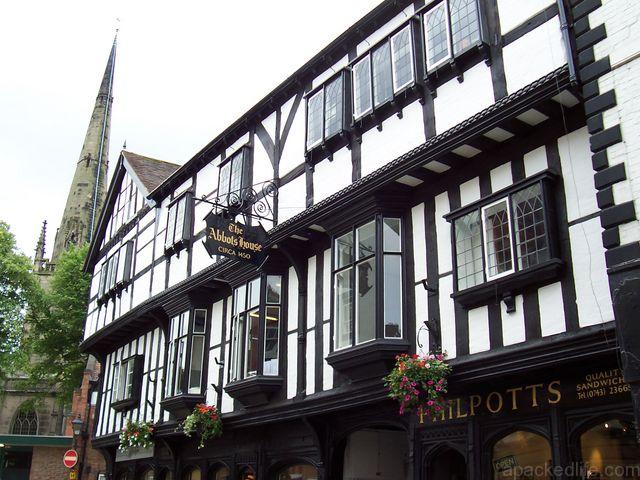 Whether you call it Shrews- bury or Shrows-bury, this medieval town has plenty to recommend it.  Architecturally it’s stunning, with lots of black and white houses, a castle, an abbey and merchant houses.  Its narrow cobbled lanes are known as shuts and passages, and they’re great to explore.  They’re also full of places to shop and eat, many of which are independent.

Shrewsbury has a lovely collection of historic churches from the Saxon St Mary the Virgin to the iconic circular St Chads.  You can take a tour of Shrewsbury Prison and understand what goes on behind closed doors.  Recognising Shrewsbury’s role in the Industrial Revolution, you can also visit Coleham Pumping Station, a steam operated machinery museum.

The River Severn in Shropshire 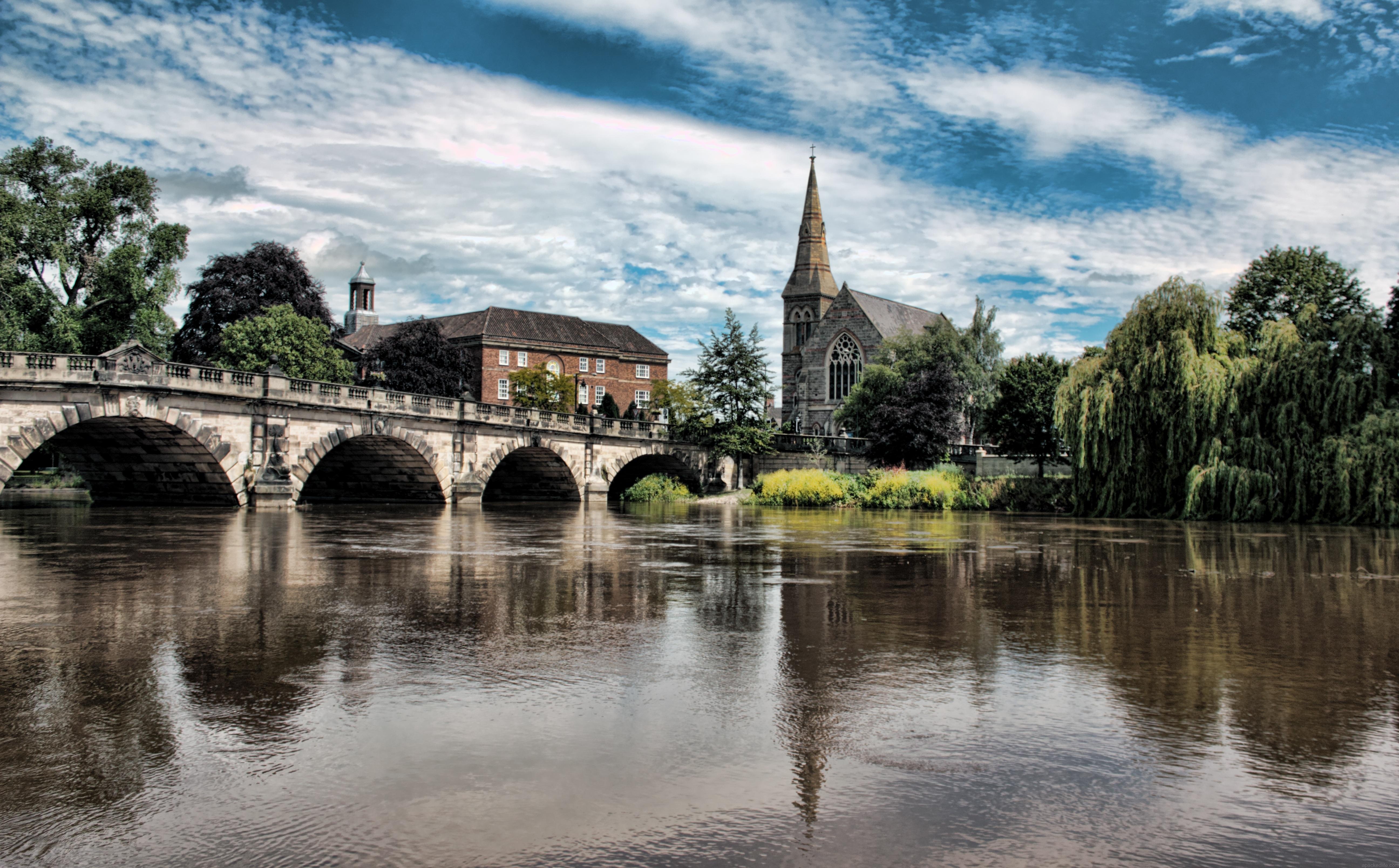 The town sits in the centre of the River Severn, which virtually loops around it.  There are lots of ways to explore the river here, from rowing boats and canoe hire to a trip on the Sabrina Boat.  It has ghost cruises every Monday night in October, giving an atmospheric way to see the town.    Shrewsbury’s original Welsh Bridge was built in 1155, and grew to include several shops in the middle and even a public convenience by 1496.  The description of the bridge at that time says that it

“hath at the one End of it a great Gate to enter by into the Towne, and at the other End towards Wales a might strong Tower to prohibit Enemies to enter into the Bridge.”

The English Bridge, is like the Welsh Bridge, Grade II listed.  Both bridges were rebuilt at the same time, but it would appear from the costings per foot of bridge constructed that whoever commissioned the Welsh Bridge got a better deal. 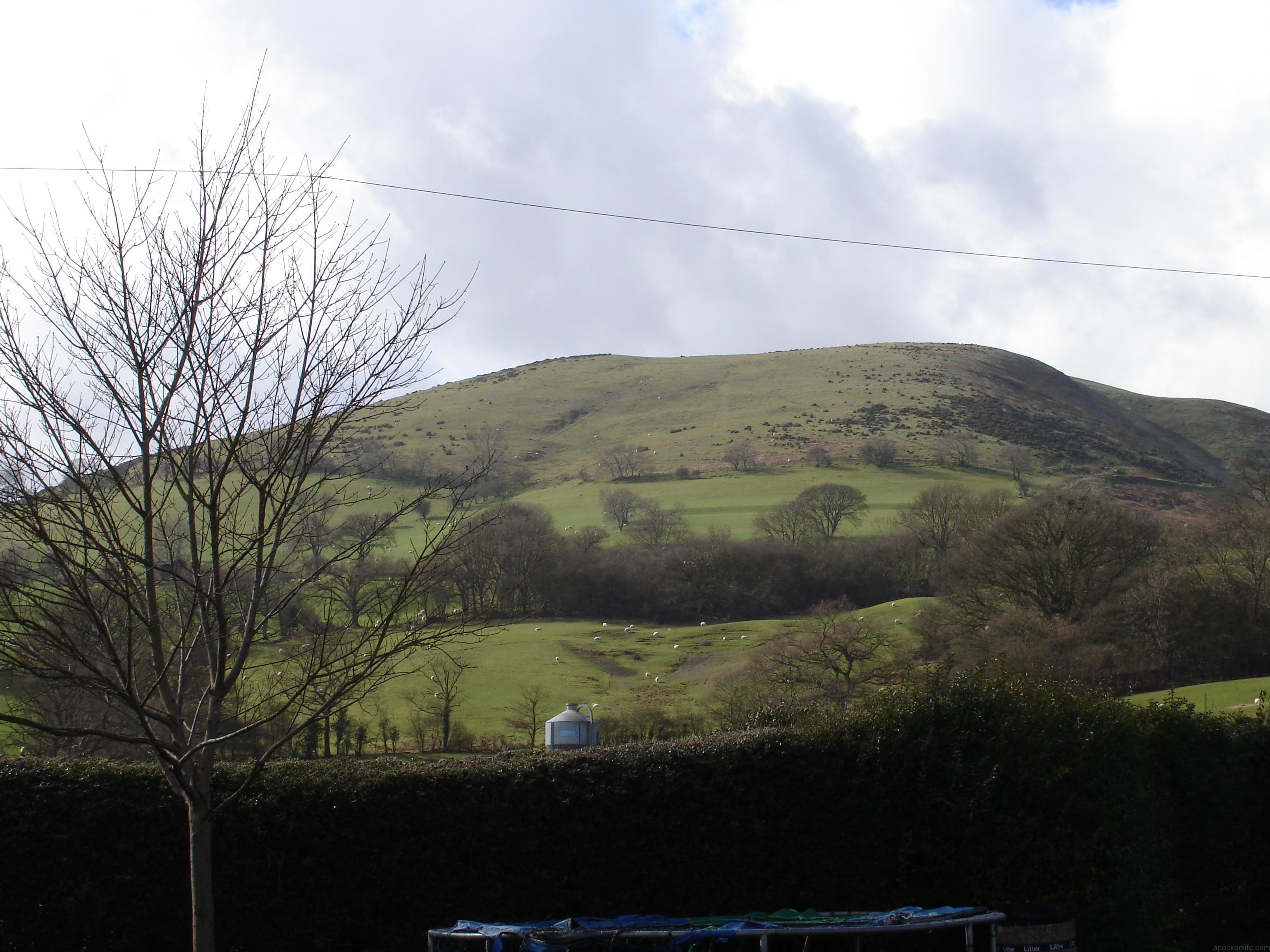 Back in the mists of time, I was a big fan of a series of children’s books set on the Long Mynd.  This atmospheric heath and moorland fired my imagination, and the first time I went walking there, I was in no way disappointed.

There’s evidence of Bronze Age settlement up here, including dykes and barrows, and also the Iron Age Bodbury Ring Hill Fort.  There are incredible views from many of the summits on the Long Mynd, from Brown Clee to the Stiperstones and the Wrekin.  The two main walking routes are the Shropshire Way and the Jack Mytton Way.  It’s also a really popular spot for gliding, hang gliding and paragliding, mainly out of Church Stretton. 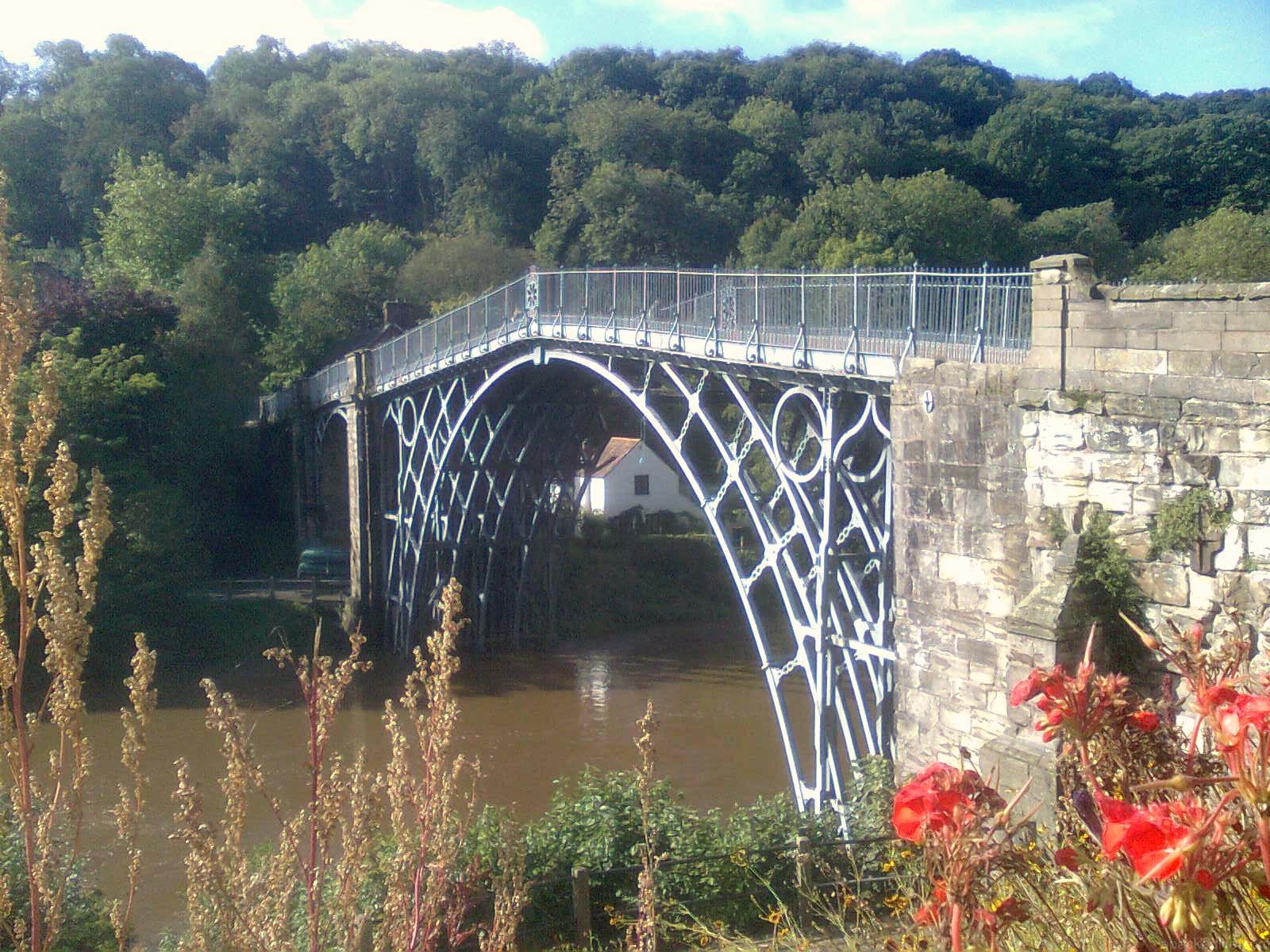 The Iron Bridge itself set in Ironbridge Gorge is an iconic sight, that once seen, you’ll never forget.  The span of the bridge reflected in the water is a beautiful tribute to the fact that industry doesn’t have to be ugly.

The area is seen as the birthplace of the Industrial Revolution, based on the work done by Abraham Darby to smelt iron with coke in Coalbrookdale, allowing much cheaper iron production.  The bridge, being one of the first made from cast iron is an important symbol of the industrial age.  And in truth it’s a very beautiful piece of work, set against the steep gorge.

Many of the other sites of the Industrial Revolution are still visible in Ironbridge, including the Tontine Hotel, which was originally built to accommodate visitors to the bridge.  In 1986, the area became a UNESCO World Heritage Site.  35 industrial heritage sites within the area are managed by the Ironbridge Gorge Museum Trust.  These include Blists Hill Victorian Town, the Coalport China Museum and Enginuity.

Bridgnorth’s a town of two halves.  The Severn Valley splits it into a High Town and a Low Town.  It’s a pretty town, with plenty of walking and exploring to be done.  What makes the town even more unusual than its split level is the fact that the two halves are connected by a funicular railway.

I wouldn’t like to claim that this is the longest rail ride you’ll ever take.  But as an interesting experience, it’s well up there.  Unless you’ve tested out the similar ride between Lynton and Lynmouth in Devon, this is definitely something new to try.  The Castle Railway is the steepest and only inland version (the Devon one is coastal).  For someone who is a wuss when it comes to heights, it’s definitely wise to let your young godson sit where he can obscure your view of the way down.  Each journey will take you one and a quarter minutes… 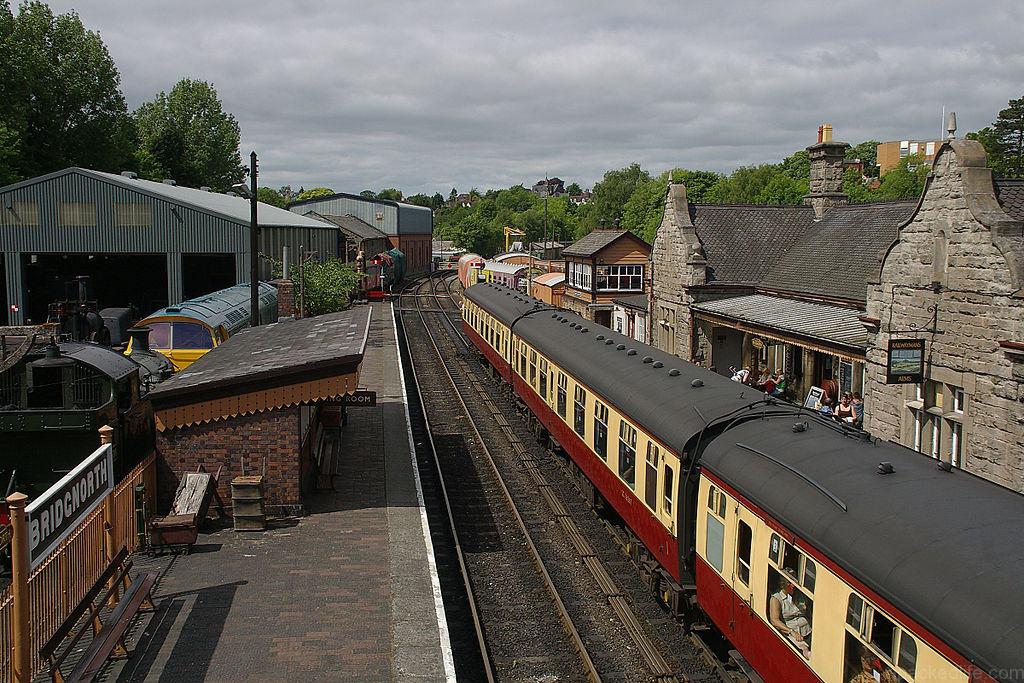 Bridgnorth is also one of the stations on the memorable Severn Valley Railway line.  The sixteen mile line runs alongside the Severn from Bridgnorth to Kidderminster in Worcestershire, with a lot of intermediary stations to explore in between.  The trains are mostly hauled by steam engines with the occasional diesel locomotive.  There are lots of different events running throughout the year on the train line.

Taking the train is a lovely experience.  Firstly, you get those lovely old fashioned tickets, and trains with proper compartments (as remembered by some of us, and as seen in Harry Potter by the rest).  It’s a gentle chuff through the valley amidst some spectacular scenery, while you use the time to chat to your nearest and dearest.  Bridgnorth is also home to the Railwayman’s Arms, a CAMRA award-winning pub right on the platform. 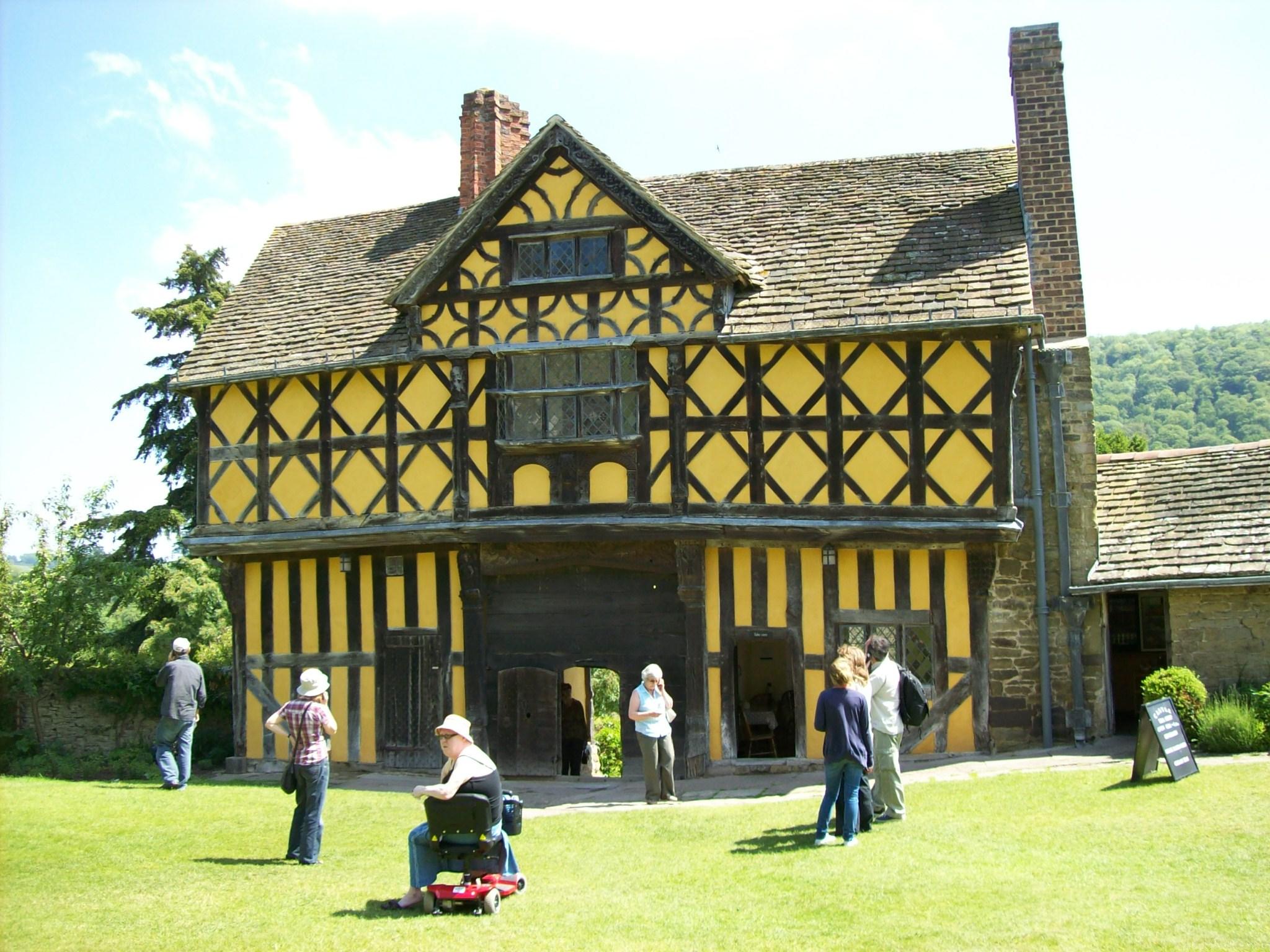 This fortified manor house is slightly off the beaten track, but it’s so worth a visit.  As you approach, you see the magnificent and imposing walls towering over you.  It was originally built in the late thirteenth century by Laurence of Ludlow, who was at the time the leading wool merchant in England.

Now it’s owned by English Heritage and is described as “one of the best preserved fortified manor houses in England”.  It’s a rare example of a nearly complete set of medieval buildings and is wonderfully atmospheric.  On a warm day, you can pick up your tea and cakes to enjoy outside within the fortified walls.  Just beware of the local bird population, who have evolved to recognise the presence of people bearing food, and come to offer their own clean up squad. 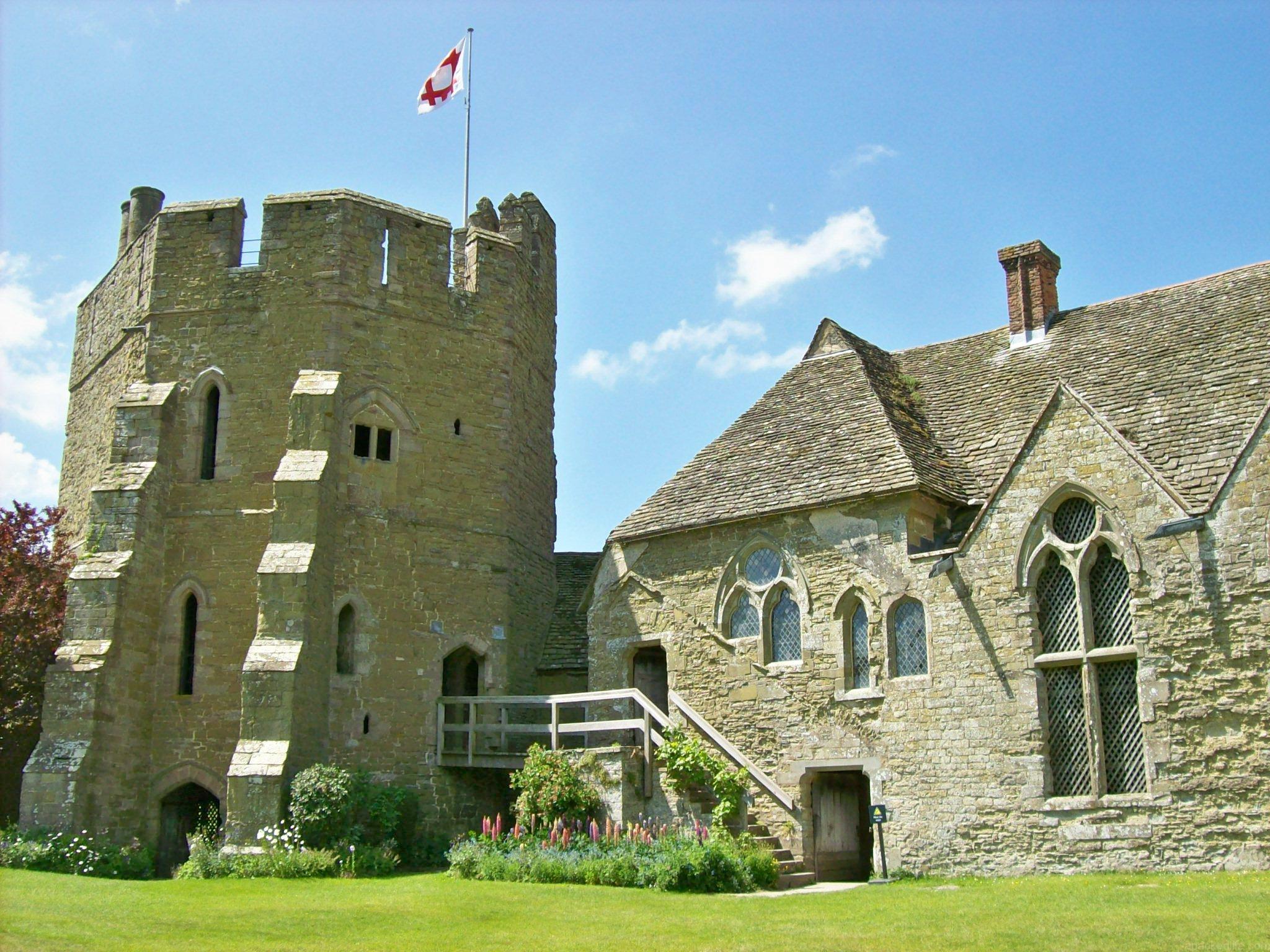 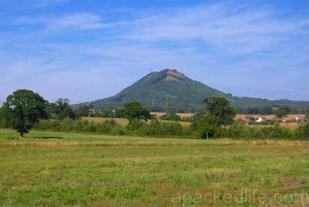 Have you ever heard the saying “all around the Wrekin”?  It’s an expression for tackling something in a roundabout way.  The Wrekin itself is a rather large hill, quite distinctive in its shape and form.  If we’re heading to Shropshire via the M54 motorway, it’s the first big landmark that says we’ve reached Shropshire.  On a good day, you can spot the Wrekin from the Beetham Tower in Manchester and Cleeve Hill in Gloucestershire.

The Wrekin is a popular spot for walkers, and is included in the Shropshire Area of Outstanding Natural Beauty.  The summit of the Wrekin has an Iron Age fort and a beacon, installed for the millennium and known as the Wrekin Beacon.  It’s rather wonderful to be told that taking a line due east from the summit, the next highest point is in the Ural mountains.

The lovely Church Stretton has been described as Little Switzerland.  That’s actually a pretty good description, as you can almost feel the air there doing you good.  It’s simply a small market town, with some charming streets to explore and some complex geology.  The town sits on the Church Stretton Fault.  In 1990, another nearby fault created an earthquake with a magnitude of 5.1 (pretty stern for England), in what was known as the Bishops Castle earthquake.

The town’s well situated for good walking, with the Burway, an ancient route, climbing up to the top of the Long Mynd.  If you are planning on walking, I’d highly recommend a lunch at Berrys Coffee House.  It’s full of simple, home-cooked and really flavourful food with a changing selection of specials and a warm and friendly atmosphere. 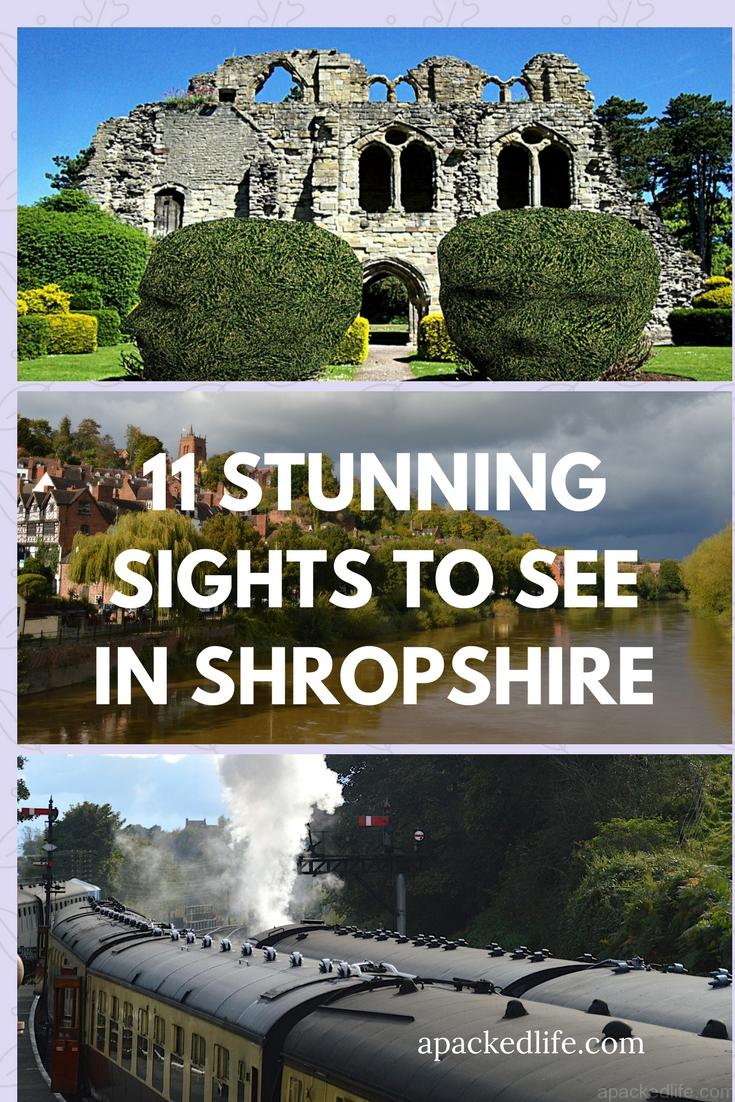 Much Wenlock, it being bigger than Little Wenlock, is a small town.  But more importantly, it’s the place where the modern Olympic Games were founded.  The Wenlock Olympian Games were established by Dr William Penny Brookes in 1850.  One of the mascots for London 2012 was named Wenlock after the town.  You can see some of the memorabilia related to the Games in the Raven Hotel.  The Wenlockian Olympic Games are still held annually in July taking place over 9 days in 8 Shropshire locations.

If you’re not in town for matters Olympian, you’ll find the beautiful Wenlock Edge nearby.  This geological feature was part of the Shropshire inspiration for the poet A.E. Houseman in A Shropshire Lad.  You may also have heard several of these poems set in a song cycle by composer Vaughan Williams. 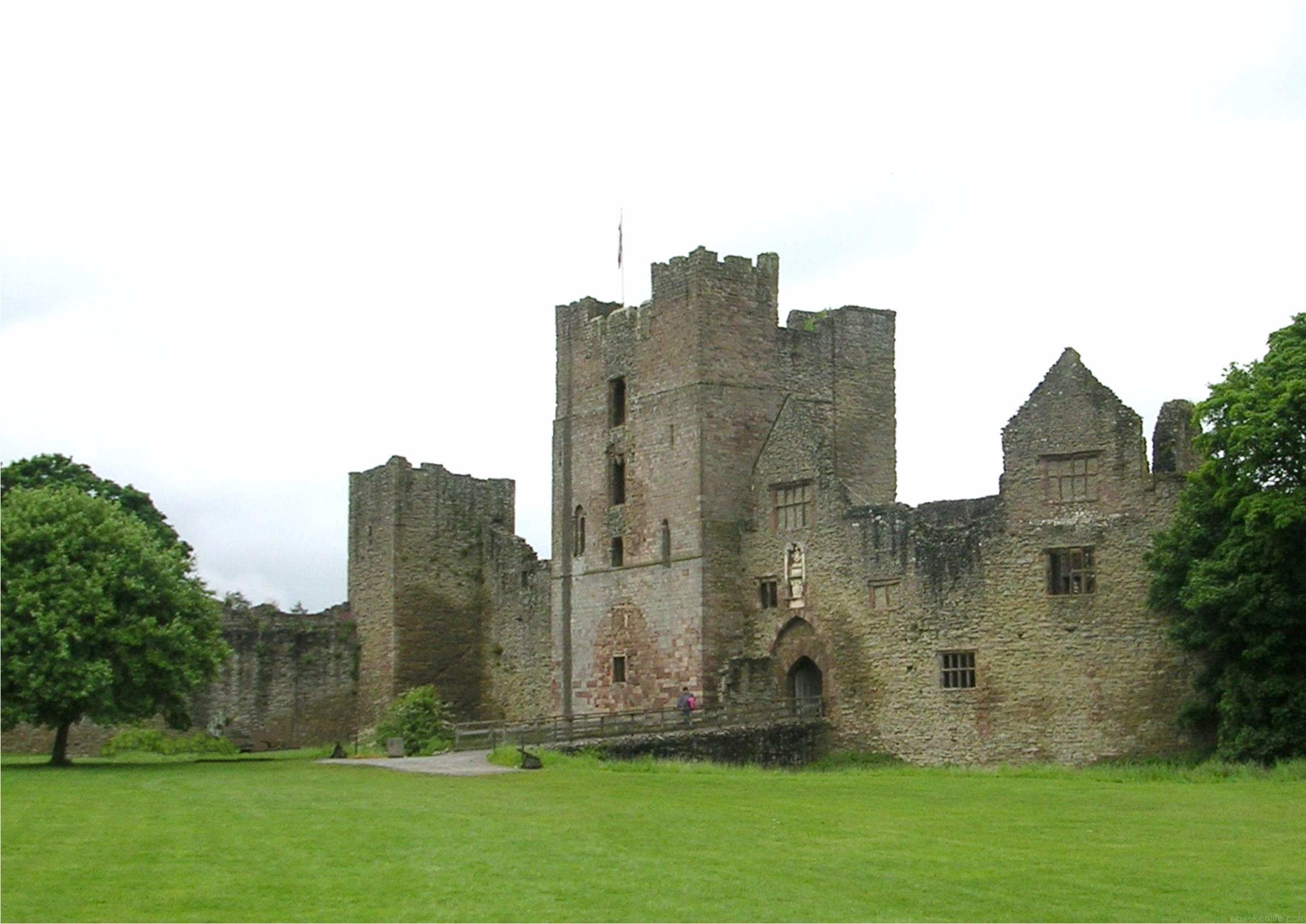 If you like history and food, then Ludlow could well be your dream destination.  Perched in a great hilltop vantage position, Ludlow has a spectacular castle which was the place where the princes of the Princes in the Tower fame spent their early years.  Now the castle grounds are home to Ludlow’s famed Food and Drink Festival.

At any time of year, you’ll find markets most days of the week, a wealth of independent shops and suppliers and plenty of medieval and Georgian charm.  Visit and you’ll understand why so many of Ludlow’s buildings are listed, and why so many of us keep being lured back by its considerable charms.  Don’t forget to stock up on your foodie treasures here. 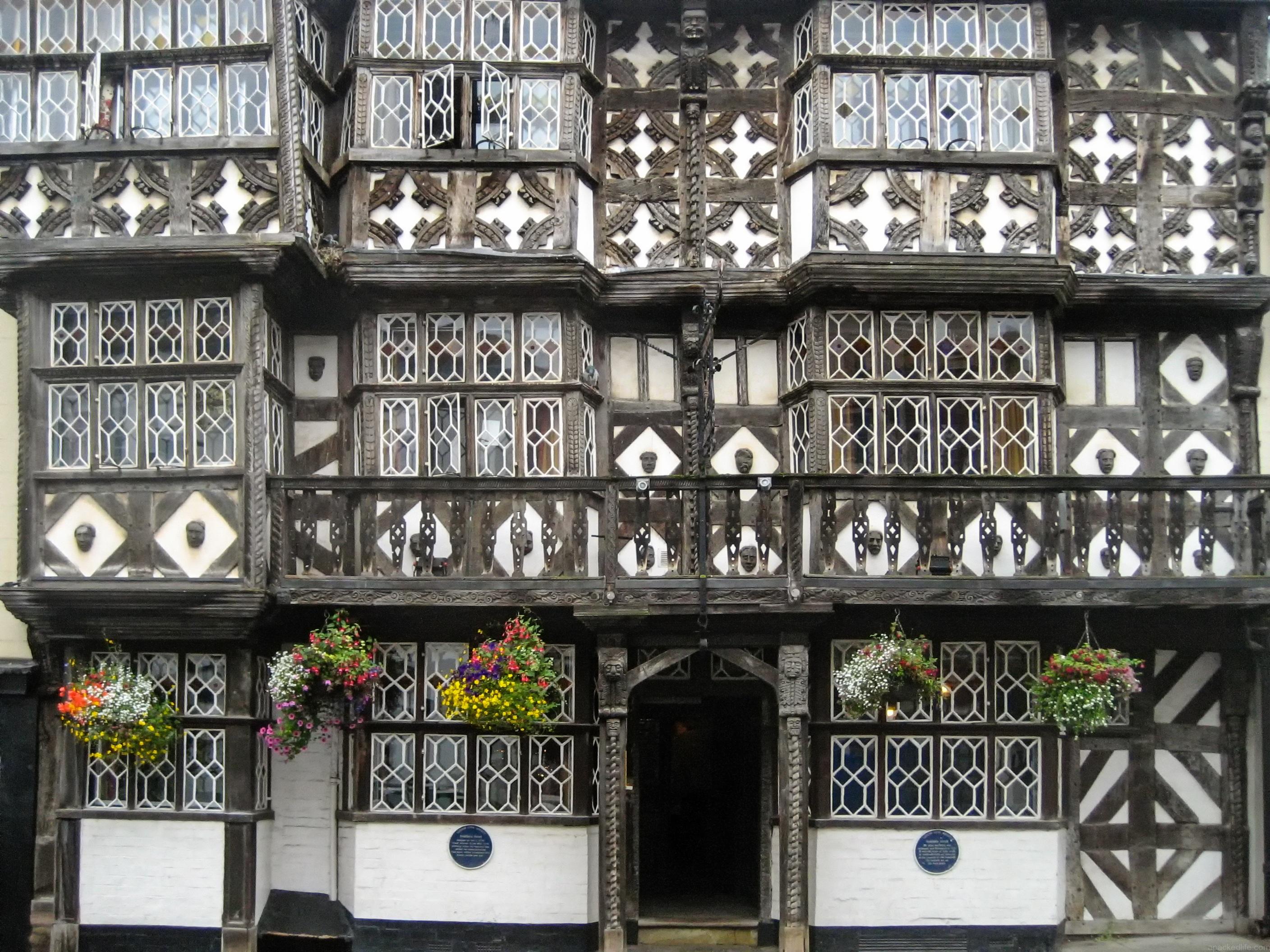 Nearby Places to Explore

If you’ve enjoyed the delights of Shropshire, there are plenty more counties of England to explore.  We’ve walked you through the Staffordshire Potteries, and also the beauty of the Forest of Arden,  Shakespeare’s Stratford and Royal Leamington Spa, voted the happiest town in England.  If you’d like to add in a city break, then why not try Birmingham, Britain’s bashful second city that has so much to offer. 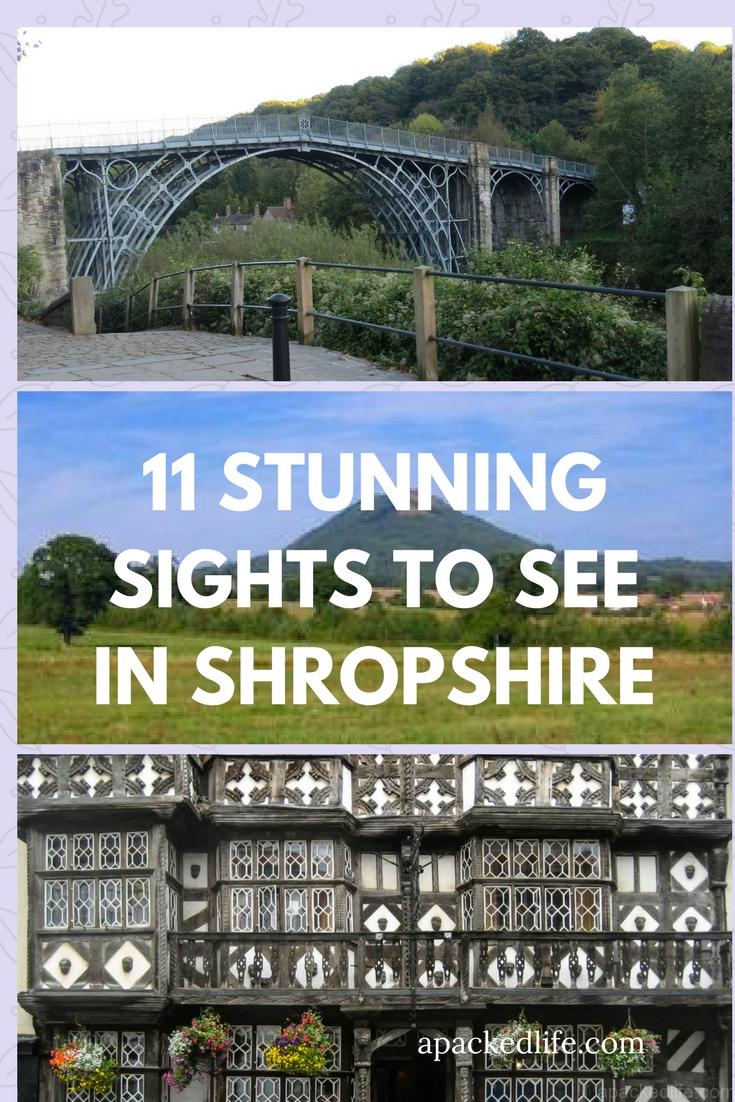 4 thoughts on “11 Stunning Sights To See In Shropshire, England”