Brussels has got much to recommend it.  From the intricate splendors of Grand Place and its ornate guild houses to the gastronomic trifecta of chocolate, chips and beer, the city has so many fine attributes.  But for something a little different, we’re venturing out of the city centre to the commune of Saint-Gilles, described as a village in the city.  Come with me, and I’ll show you seven beautiful reasons that make the short journey so worthwhile.

It’s a short hop on the Metro or in an Uber to reach Saint-Gilles.  It will take you less than 20 minutes out of peak hours to arrive in the central square from Grand Place.  Lines 3 and 4 of the Metro run north to south, and will take you out to the following stations all of which serve Saint-Gilles:

Despite the number of stations I’ve listed which cover Saint-Gilles, it’s a walkable area, and you might hop off at one station and return via another.

All station names are given in both French and Flemish, although French is the primary language in Brussels.  The Metro is a tramway which runs partly underground.  Look out for the subway art as you go; I was particularly fond of the henna art designs at Lemonnier.

If you take an Uber from the centre of Brussels, it will cost between 10-13 Euros.

Saint Gilles is one of those places that blends its sweetness with a little saltiness.  The description “up and coming” probably reflects some of the contrasts that exist within the commune.  It has some of the most beautiful buildings you will see in Brussels (and let’s face it, this is a city with massively high architectural standards).  But it’s also one of the most impoverished parts of the city.

Possibly the only place you will ever visit whose fortune was built on cultivation of the humble cabbage, Saint-Gilles is a truly multicultural area.  The largest community groups are French, Portuguese, Spanish, Italian and Moroccan.  This is reflected in the wide variety of cuisines on offer that we saw while wandering around.

“The streets have names everywhere: Moscow Street, Montenegro Street, Scotland Street, Spain Street, Portugal Street, Denmark Street and Bosnian Street, as if those had named them more than a hundred years ago already knew that the whole world would gather one day in Saint-Gilles “  Marc Didden

Saint-Gilles feels a truly warm and friendly place.  Friends embraced friends in bars, and made their small children laugh.  Plates were generously laden, and there was a lively bustle, even on a Sunday afternoon.  We were also warned to be careful of pickpockets on the Metro, so take your normal traveling precautions and go enjoy this beautiful area.

Gaudi’s signature is all across Barcelona, but the genius of Victor Horta is less obviously lauded in Brussels.  Horta was a Belgian architect and designer, described as “undoubtedly the key European Art Nouveau architect”.  You may be less familiar with his name than that of Gaudi.  But Horta’s work is incredibly significant, taking the Art Nouveau style of decorative arts and translating it into buildings.  In fact, four of those buildings are designated as a UNESCO world heritage site.

Wandering around Saint-Gilles, the beauty and elegance of the architecture is evident.  From iron ballustrades to delicate mouldings, there’s a lot to be enjoyed by looking up at the work of architects Horta, Stuyvens and Hankar. 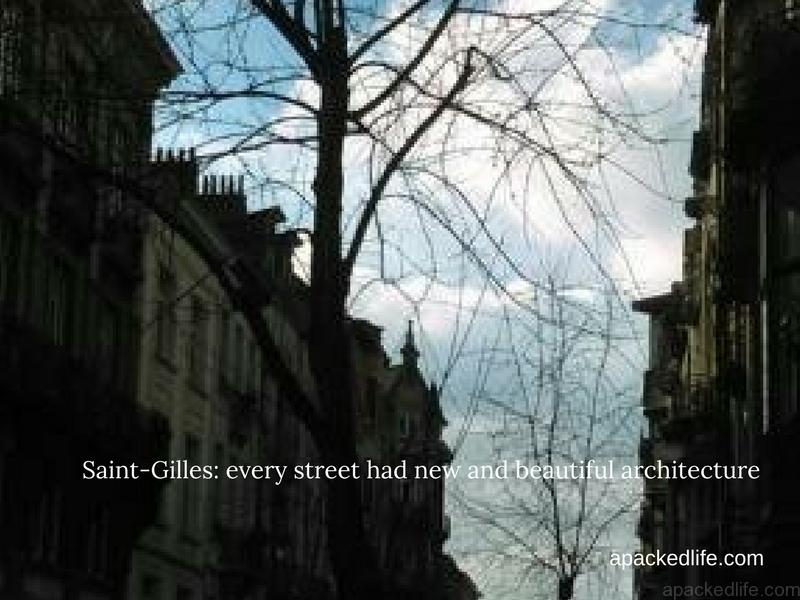 One of Horta’s private houses – Maison & Atelier Horta on Rue Americaine- is now his museum.  It typifies Art Nouveau design, with its industrial structure of iron and brick made beautiful by stained glass, skylights and polished wood, all exhibiting flowing natural curves.  It’s open each afternoon from Tuesday to Sunday from 2.30-5.00pm.  Admission is 10 Euros.  Please note that photography is not allowed in the museum for copyright reasons.

Incidentally, if you’ve arrived at Grand Place via Brussels Central Station, you’ve already seen Horta’s work.  He designed this modernist station before the First World War, although it wasn’t completed until after his death.  The  Brussels Comic Strip Museum at Rue des Salbes is also a Horta design.

It’s not all about Horta though.  Hotel Hannon is another important site built by Jules Brunfaut for the founder of the Belgian Photography Association.  It’s now the photography exhibition space Contretype and can be visited from Wednesday to Sunday afternoons.  If you visit, don’t forget to check the neighbouring house at Boulevard Brugmann, which has a pair of sweet owls over the door.

Four of Horta’s buildings have been designated as a UNESCO World Heritage Site.  One of the four is his museum described above.

This is what the UNESCO World Heritage Inscription has to say:

The Major Town Houses of the Architect Victor Horta – Hotel Tassel (1893), Hotel Solvay (1894), Hotel van Eetvelde (1895) and the House and Workshop of Victor Horta – located in Brussels, are outstanding examples of Art Nouveau. These four houses, that bear testimony to the immense talent of this Belgian architect, achieve a remarkable sense of unity with meticulous attention to the smallest detail of the building, from the door handle or bell to the least piece of furniture.

Horta, one of the earliest instigators, heralded the modern movement of Art Nouveau architecture. The stylistic revolution represented by these works is characterised by their open plan, diffusion and transformation of light throughout the construction, the creation of a decor that brilliantly illustrates the curved lines of decoration embracing the structure of the building, the use of new materials (steel and glass) and the introduction of modern technical utilities. Through the rational use of the metallic structures, often visible or subtly dissimulated, Victor Horta conceived flexible, light and airy living areas, directly adapted to the personality of their inhabitants.

Hotel Tassel, the first building to incorportate Art Nouveau features into architecture, uses iron with curvilinear botanical forms.  This has been described as the rather painful-sounding “biomorphic whiplash”.  Horta designed not only the house, but also all of its interior decor from furniture to carpets.  It was commissioned by a professor.

While we were in Saint-Gilles, we were keen to see La Porteuse d’Eau, described as the most famous Art Nouveau building, although it was actually built to mimic the style.  The Water Carrier herself is a bronze sculpture of 1900, inspired by a girl who drew water for the horses pulling the omnibus to Saint-Gilles.  You can see her image in the stained glass panel on the first floor of the building. 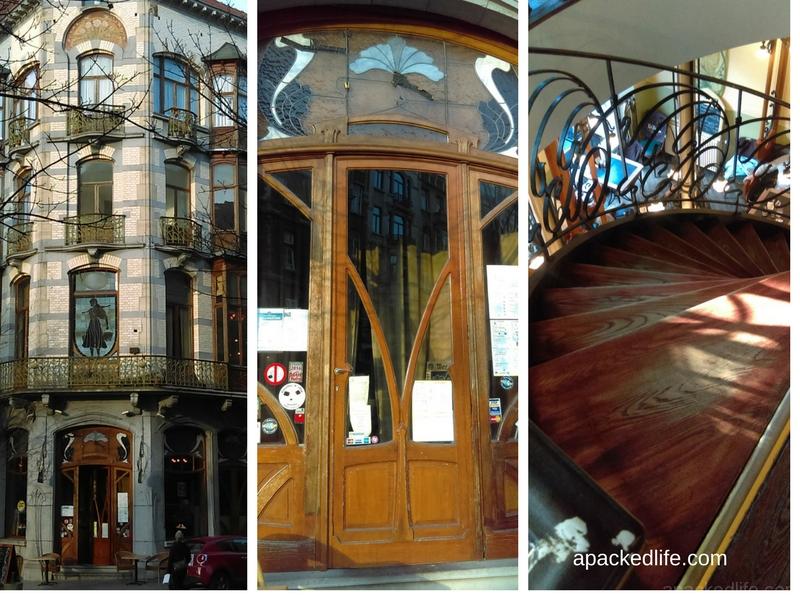 On a sunny afternoon, it was well visited, and we stopped off to enjoy its cafe bar.  When you enter the room downstairs, your eyes are immediately drawn to the magnificent spiral staircase in the middle of the room.  There are lots of Art Nouveau panels, and some beautiful wooden partitions between seats.

The spiral leads up to a first floor dining room dominated by that large stained glass window of the water-carrier.  The ornate mirrored toilets were simply the most splendid loos I had visited outside the Summer Palace in St Petersburg.  They, and the spiral staircase, are worth a detour alone.

Downstairs we drank tea and beer, watched people enjoying leisurely late lunches over a series of newspapers, and achieved a level of chill that was completely perfect.  The menu is very typically Belgian, including croquettes, vol au vents and scampi.  Lovers of Belgian beer should note the cafe-bar has a list of over 70 varieties.

There are plenty of opportunities to try out Belgian beer in Saint-Gilles.  We visited Union on the main square.  After the Sunday market nearby, it was full of local families tucking into massive plates of spaghetti which smelled entirely gorgeous.  We could see people’s everyday lives unfolding before us: celebrations of children’s achievements, a stray glove returned, Sunday papers perused and discussed.  This is the kind of place to come to get the feel of what it’s like to be part of a community. 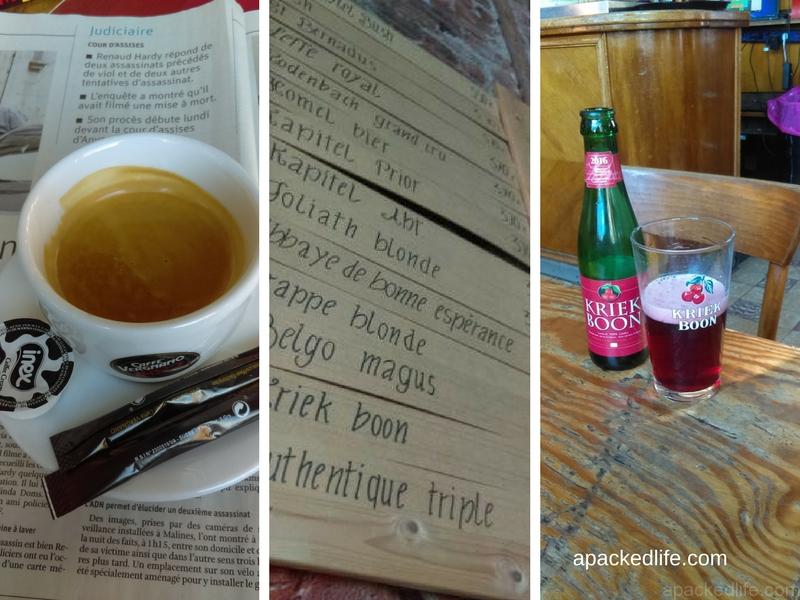 Further along the main square, we visited beautiful Egalite.  This was much quieter, and rather gorgeous.  The exposed brick walls host an array of wooden slats setting out the beer menu.  With a list of more than 500 beers, many stocked like a tempting smorgasbord in one of the largest beer fridges I’ve ever seen, it’s a beer-lover’s paradise.  For decor lovers like me, it had some seriously fabulous chandeliers.  Both bars are well worth your time for different slices of Belgian life within a few yards.

The imposing Porte de Hal is the last vestige of one of the seven gates that formed the outer wall of Brussels.  It was built between 1360-1385 and still looks majestically stout.  You certainly wouldn’t want to try to interfere with the city’s defences when confronted with that edifice.

The original tower was used for protection and customs inspections.  It then had a variety of uses from a corn loft to a military prison.  In the eighteenth century it became a civil prison and place of execution under the Austrians and the French.  More peaceable uses followed as the state archives in 1827 and then an armour museum in 1844.  In 1868, the architect Bayaert gave the tower its current look. 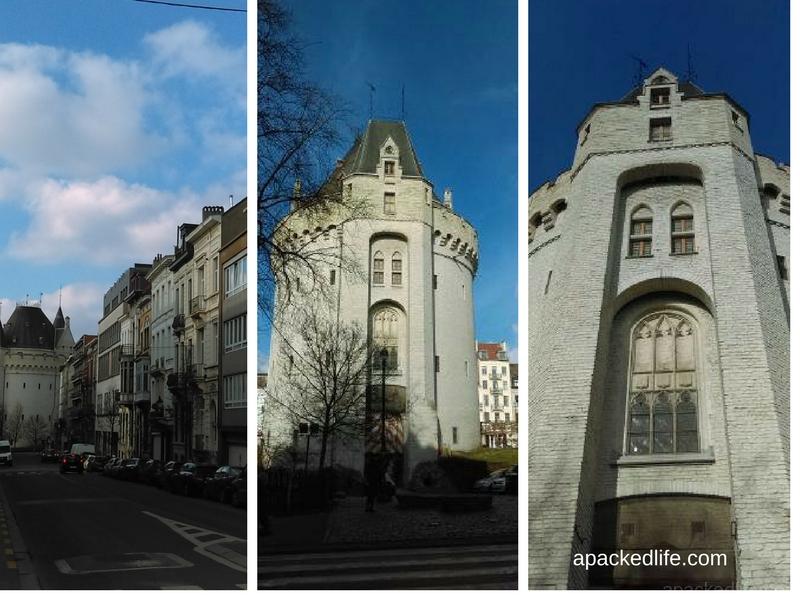 Named after the Flemish city of Hal, which it faces, the building is now part of the Royal Museums for Art and History.  You can see the remains of the drawbridge and the moat on the approach to the entrance.  The museum has exhibits about the history of the building, the city of Brussels and its defence.  Here you can also find out more about armour, and, most fascinating to me, the various trade guilds of the city.  There is also a walkway round the battlements, giving a great view of the city.

Built to resemble a French chateau, the Town Hall is actually way smaller than it looks. It was built between 1900-1904.  You can organise a guided tour of its magnificent interior by contacting the College des Bourgmestre et Echevins.  With murals, gilded ceilings and fabulous extravaganzas of architectural features, it’s well worth a visit. 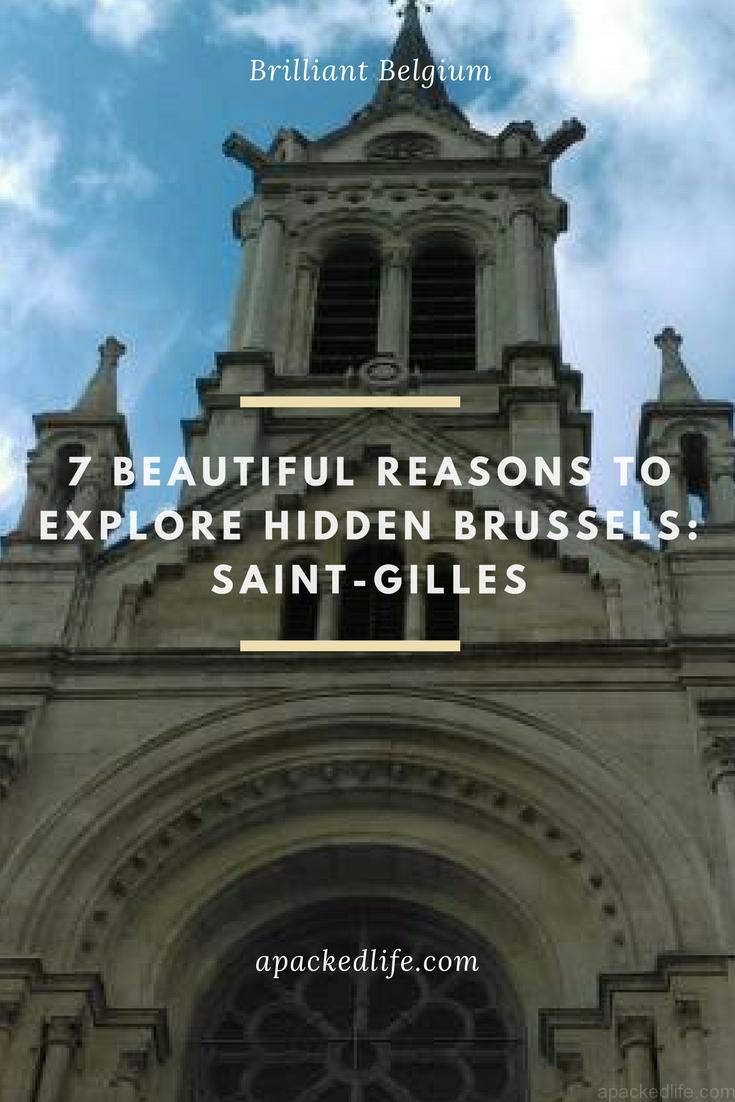 The other end of the main street is dominated by the parish church of Saint-Gilles.  The lesser known cemetery of Saint-Gilles commemorates the soldiers of the Battle of Waterloo and the First World War.  You can read, in French, an incredible guide to the cemetery here and explore the beauty that emerged from grief.

Civic life in Saint-Gilles has a rich and complex 800 year history to explore.

“I immediately felt this diversity and this swarm of people, an agitation fueled by activities of all kinds, by a multitude of associations and companies.” Bourgmestre Charles Picque

It’s difficult to explain exactly what is so attractive about Saint-Gilles.  I went perusing other people’s experiences to try and articulate better what I loved about the place.  It’s certainly not the neatest, sweetest, nor most sanitised place I’ve ever visited.  It clearly has some issues with regard to poverty, multi-culturalism and the baggage that comes with most metropolitan living.  Yet it has something rather special. 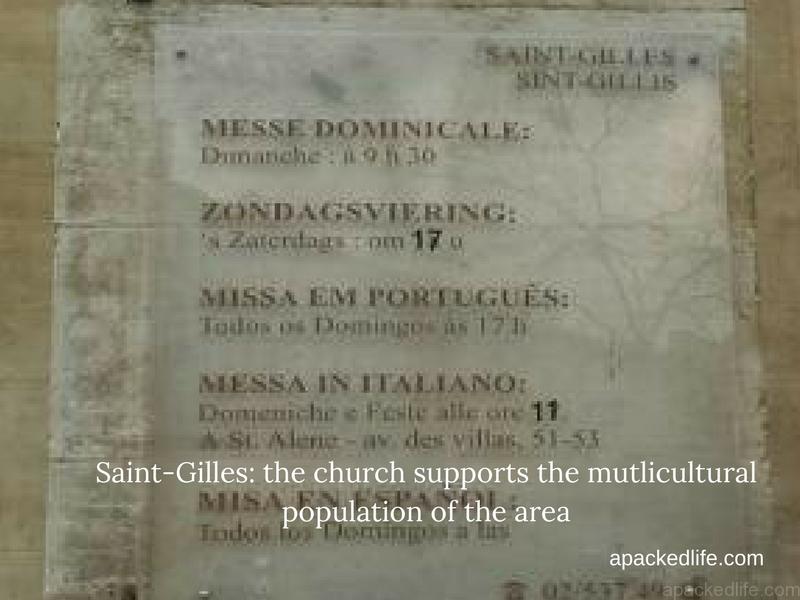 One review of Saint-Gilles commented on the mixture of social layers that exist in the area.  That’s very much the case: from hipsters to workers to Eurocrats and people setting up new lives, you’ll find them all here.  The area is bursting with small businesses, concept stores and small non-profits.  The beautiful buildings are all part of the vibe too.  Authentic was another word used in reviews.  This is the Brussels of real people, lives lived in close proximity and with some challenges.  As one reviewer very perceptively said “not everything is poshed up”.    Most of all, Saint-Gilles is bursting with energy and humour.  I can wholeheartedly recommend it to you. 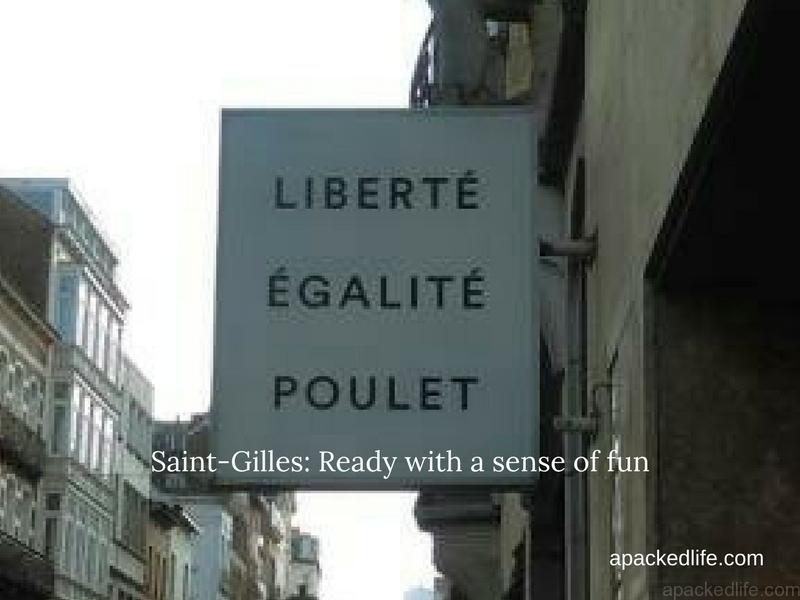 In addition to the links I’ve given you above, you’ll find more information here on:

I make no excuse for being a total Belgophile.  You can see more of my Belgian explorations here, where I’ve

If so, please share.  And pin this for later too! 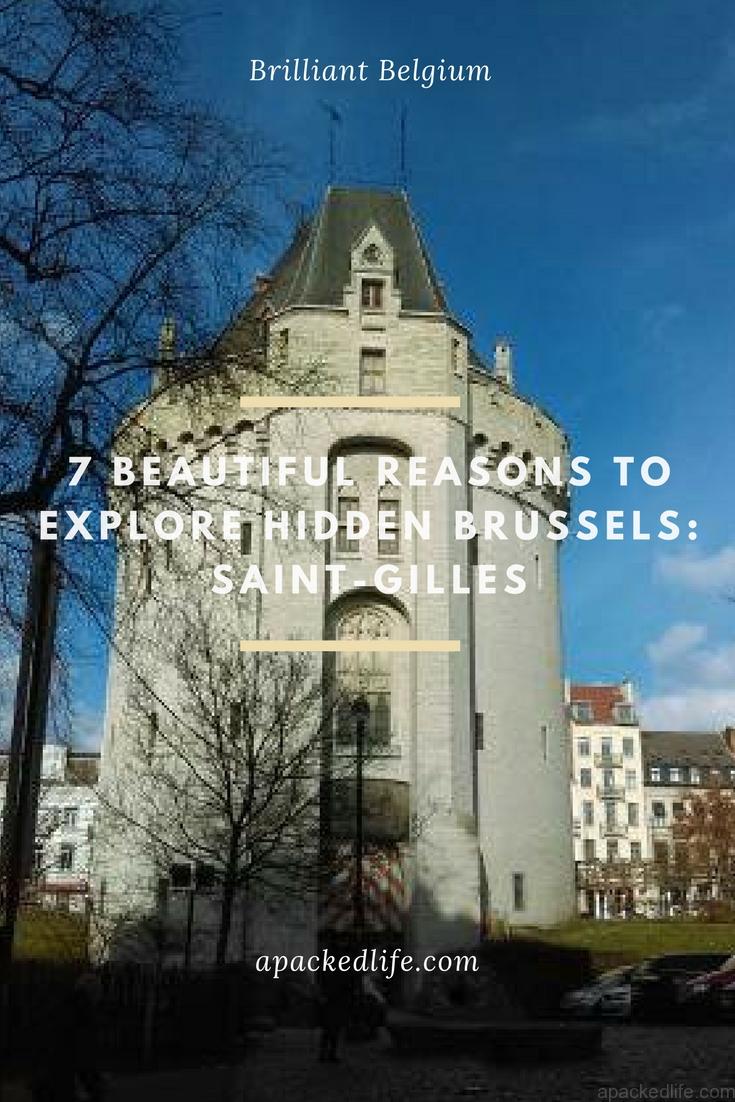