Conflict.  War.  Invasion.  Troubles.  None of these are inviting words.  Especially when you are traveling, and using your precious vacation to have fun and explore the world.  Yet I urge you to take time to see the eloquent and quietly understated Imperial War Museum on a visit to London.  It is one of those places that sets our freedoms, liberties and ease in context, through a vast collection that transports you to the darker side of the human soul.  Come with me to see the stories of people impacted by conflict.

the Imperial war Museum: The sites

There are a number of different sites to the Imperial War Museum in the UK.  You can visit the North site in Manchester.  There is also a site at Duxford, just south of Cambridge on the road to the army town of Saffron Walden.  Duxford is attached to an airfield, and also has air displays.  Finally, there are three sites in London: HMS Belfast, the Churchill War Rooms, and the Imperial War Museum itself.

How To get to the imperial war museum Sites in London

All of the sites are easy to find.  A great way to get directions is to use Transport for London’s Journey Planner, where you can pop in your details and get a choice of route.  Plus, if you time it right in your visit to the Lambeth site, you can be crossing Waterloo Bridge in time for a Waterloo Sunset, which has to be an atmospheric moment.

For HMS Belfast, moored not far from Tower Bridge, it’s an easy walk from London Bridge Station.  You have all the dining facilities of More London right nearby too.  The Churchill War Rooms are just off Horseguards Road and St James’s Park, where you’ll pick up a District Line or Circle Line Tube.  For the Imperial War Museum, it’s an easy walk from Lambeth North on the Bakerloo Line, or look for a bus going south over Waterloo Bridge.

The ship, permanently moored as a landmark on the south bank of the Thames just east of London Bridge City Pier, is one of the Museum’s three London sites.  It has a labyrinthine 9 decks to explore via ladders and passageways.  You can see the guns that fired some of the first shots on D-Day, and learn how the ship operated under war conditions.

HMS Belfast is a Town class light cruiser.  She was originally part of the British naval blockade against Germany.  She struck a mine in 1939 and spent more than two years undergoing a series of repairs.  Belfast was an escort to the arctic convoys to the Soviet Union in 1943, then had a part in Operation Overlord to support the Normandy landings.  She saw further combat action bewteen 1950-52 in the Korean War, and was finally preserved as a floating museum.

Like many museum sites, Belfast is an interactive experience.  You can hear how war impacted on the 950-strong crew, and see the intricacies of their day to day lives.  The Gun Turret Experience takes you through the Battle of North Cape, and there’s an opportunity to run the ship through the Pony Express exercise in the Operations Room.

Belfast is part of the National Historic Fleet, and is one of 206 vessels on its register ranging from trawlers to narrowboats and lake excursion steamers.

The Churchill War Rooms are set in an underground bunker where the strategic decisions of the Second World War were taken.  The permanent exhibits include the Cabinet War Rooms, where the business of government at war was conducted.  There’s also a museum devoted to Churchill himself, and Undercover – Life in Churchill’s Bunker which deals with the lives of those staff supporting the day to day activities underground.

The Imperial War Museum’s Past

Admission to IWM London is free.

The Museum first opened to the public in 1920, based at the Crystal Palace.  After a further move, it relocated to its current building in Southwark, just a few minutes south of Waterloo Bridge.  The building itself has a troubled history, having been the Bethlem Royal Hospital, Europe’s oldest psychiatric hospital.  In less enlightened times, it saw worrying treatment of patients in the asylum.  The common name for the hospital – Bedlam – passed into everyday language.  For a chilling semi-autobiographical account of life in Bedlam in the 1930s, I urge you to read Antonia White’s Beyond The Glass, the last of the Frost in May quartet.

As you arrive at the Museum from north of the Thames, you notice the elegant dome of the building appearing above parkland.  Then your attention switches to two enormous guns and a series of yellow painted warheads gathered beneath the trees.

If you are wondering whether to visit with your children, please do.  I was on my own when I visited, and saw lots of family groups.  There were some very powerful questions being asked and answers given.  Don’t feel this is something that wouldn’t be appreciated and understood or valuable as an experience.

The museum recommends about two and a half hours for your visit, and that worked well for my time there.

Among the permanent exhibits, you’ll find

Growing up during the Cold War, and the nuclear tensions of the 1980s, I went to see some of the exhibits relating to more recent conflicts.  Here are some photos I took of the exhibits that really resonated with me. 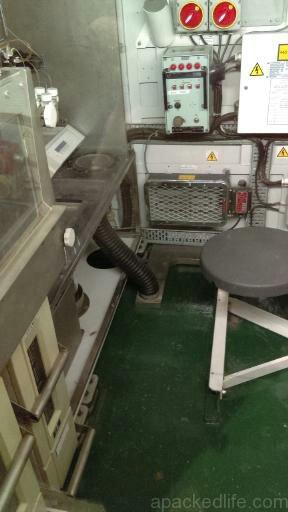 Decontamination Unit from the war in Iraq 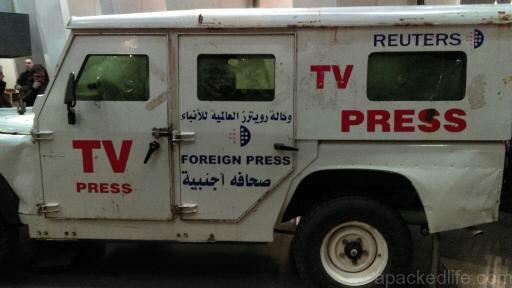 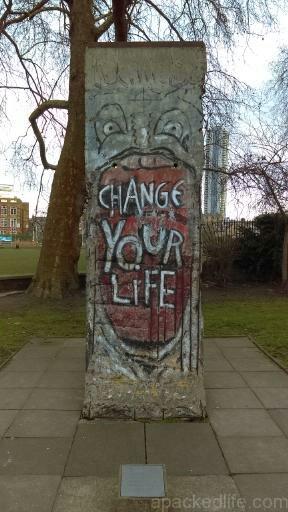 Part of the Berlin Wall 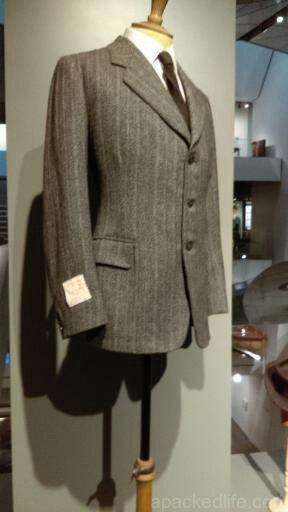 Suits for the return to Civvy Street after WWII 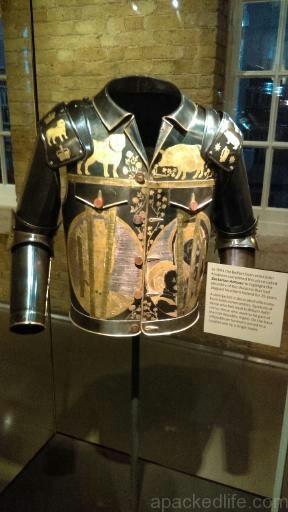 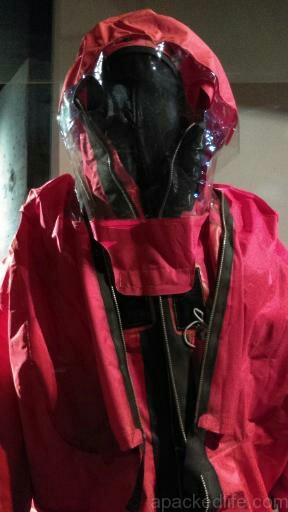 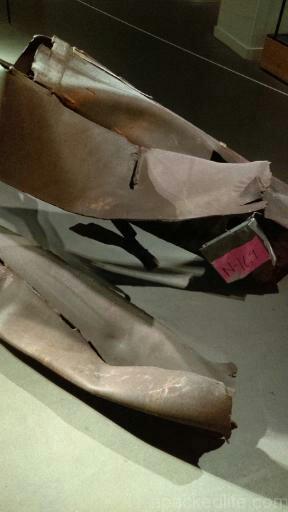 And the final image I couldn’t Capture

My attention was drawn to a screening of a short film.  Bolan Market charts the passage of an armoured Husky vehicle in Helmand Province Afghanistan.  It was filmed by war artist Mark Neville, who spent two months embedded with 16 Air Assault Brigade, from a spot beside the vehicle’s gun.  Neville was advised that he could not film on the ground for fear of his personal safety.

The film depicts a whole range of conflicting and conflicted emotional reactions to the presence of armed troops in a marketplace just beginning to trade again.  It’s six minutes of silent, raw reactions.  You can see everything from warmth to loathing to anger to mixtures of emotions beyond my ability to describe.  I stood and watched it three times, it had that powerful an impact on me.

We’ve more light-hearted looks at London as well, including a visit to the area around Tower Bridge, and getting your theatre experiences on a budget.  If you want to read more about the Cold War, we visited a secret nuclear bunker in Cheshire, occupied by a rather fine spy-cat.

If you’d like to visit, pin this for later. 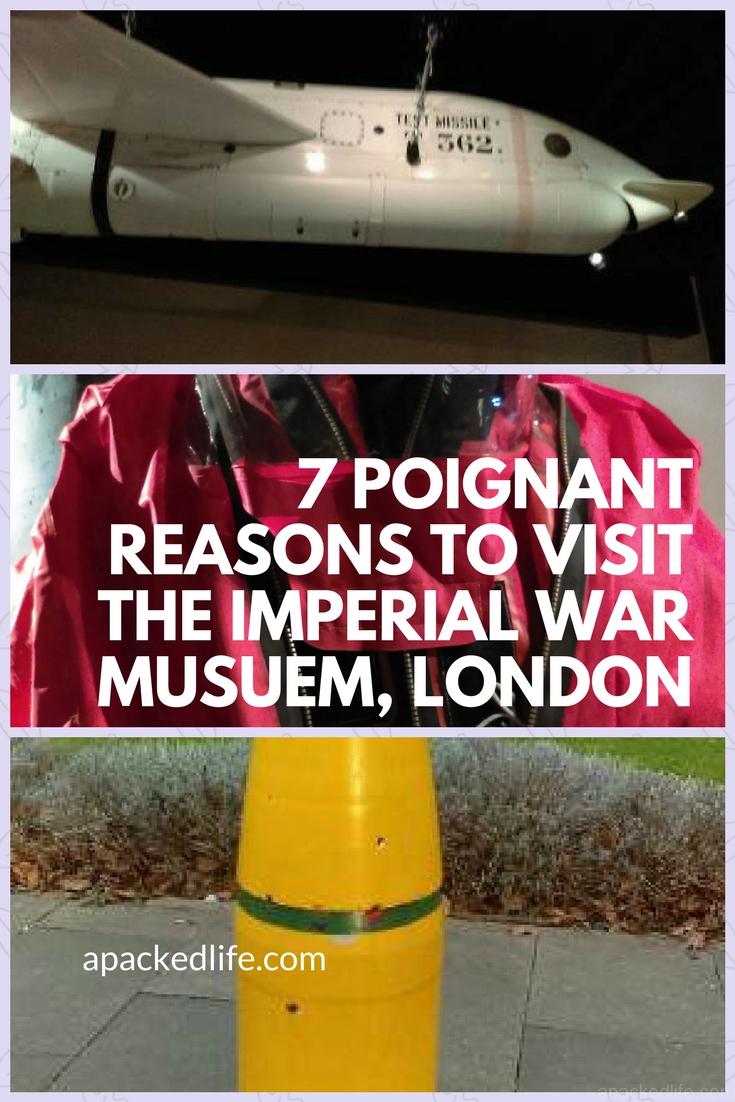