Among the many magical things about London, there are great opportunities to enjoy all the cultural offerings that await.  We love taking a trip to the theatre, and it’s possible to do so without breaking the bank.  Not just in Theatreland, but in many other venues around London, there are many places to find discounted cultural treats.  So here are our thoughts on how best to enjoy London theatre on a budget.

Over in Leicester Square, you’ll find TKTS.  This is the official discount theatre ticket shop, and you need to visit in person.  Head over there early to see what might be available that night, the next day, or the day after.  This is run as a non-profit, and you can sort your tickets there and then.  The website gives you a list of the shows available, ticket options and prices.  Don’t forget that this is a busy location, and queues can be 20 minutes at peak times.

You can try your luck on the door for returns.  Many of the theatres are very close together in the West End, so it won’t take long to wander past a few doors and see what’s available.  Most box offices open at around 10am.

Some shows have daily ticket lotteries. The Book of Mormon, for example, has 21 pairs of tickets sold for £20 per ticket.  You can join the free lottery up to 2 and 1/2 hours before the show, but you have to be there when the lottery is drawn.  There’s also a weekly online lottery.  The same show offers a priority returns queue online, meaning you get a text if they have returns or cancelled tickets available to you.

The Young Vic sells a limited number of lucky dip tickets for £10.  Secure one of these and you could be anywhere, including the possibility of standing or having one of the best seats in the house.

The Donmar has its Klaxon scheme, where short notice tickets are released at noon each Monday (maximum of two tickets per production) for performances two weeks later.    They also release occasional surprise Klaxon tickets, which are announced on Twitter.

If you don’t mind your experience being a little different, there are lots of ways to see London Theatre on a budget.

At the magnificent Shakespeare’s Globe, you can find 700 standing tickets available at £5 each.  You get to see the performance up close and personal from the theatre equivalent of the mosh pit, complete with actors rushing past you.  It’s probably obvious that you should wear something comfortable on your feet, as the shortest performance (Macbeth, one of my favourites) still clocks in at around two hours.

You can also get a chance at a standing ticket at the Royal Court Theatre in the Jerwood Theatre Downstairs.  There are only 4 available per show, and they cost a magnificent 10p.  Yes, ten small pennies.  Be there an hour before to try for one.  Do be aware that they are not available for every show, depending on the production, and they do have a restricted view.

We’ve been very lucky with restricted view tickets.  We recently saw the Small Faces musical All Or Nothing at the Arts Theatre.  Our restricted view tickets saw us lounging on a magnificent velvet bench in the circle, from which we had a great view by turning less to the right than is needed to see past the edge of the laptop on which I’m typing now.  You also have the potential to be upgraded if the show isn’t full, as happened to us for Sunny Afternoon.  So by all means check those options out. 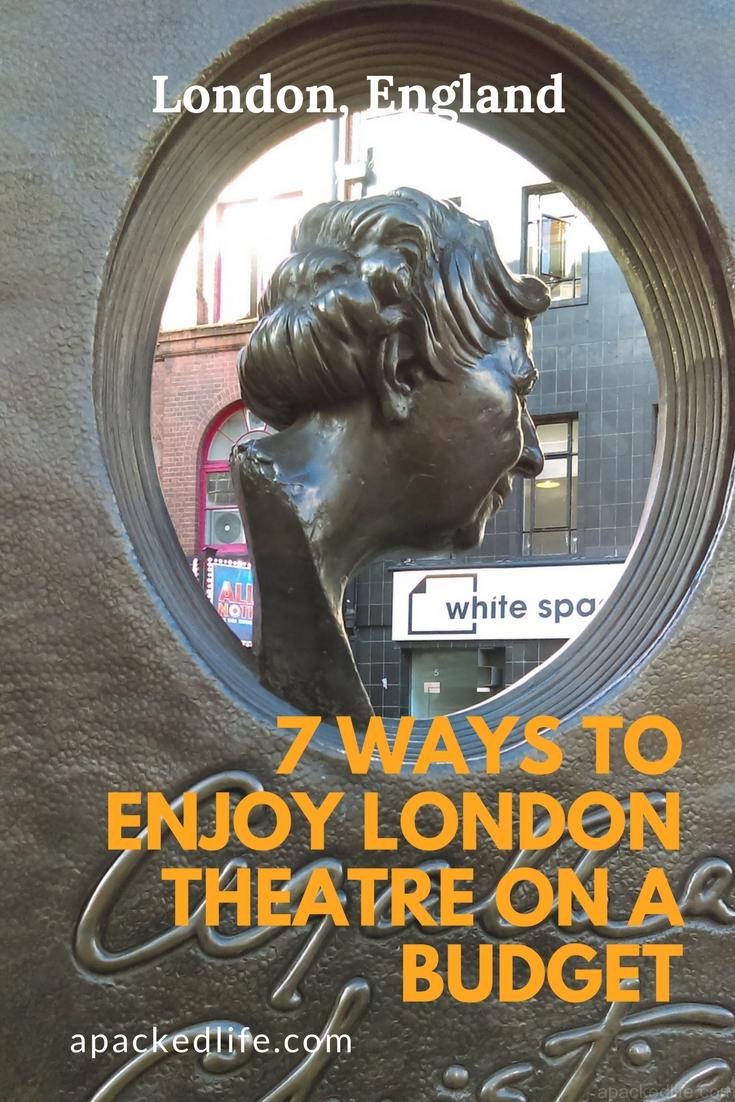 There are a whole range of cards and schemes to allow you to enjoy London theatre on a budget.  Don’t forget to take any evidence you need for proof of age or status when collecting your tickets.

The Young Vic has a number of £10 tickets for every production for full time students and people under 25.

If opera is your thing, the English National Opera has the brilliantly named Access All Arias.  Here you can join a free scheme for full time students or people aged 16-29 and get two discounted seats per production.

The Donmar has a scheme called Young and Free.  If you’re 25 or under, you can sign up to be includes in the free monthly ballot for tickets the following month.

There’s also the London Theatre Passport which costs £25 from Visit Britain.  This offers between 40-70% off on a variety of tickets, depending on the option you choose.  The link has full details of the options available.

Many theatres also offer discounted tickets for people aged 60 plus and people with accessibility needs.

Sometimes being an earlybird can work in your favour.  We’ve often scored cheap tickets more than a month in advance, which also often opens up cheap rail options too.  There are many ticket retailers online, so check out your preferred supplier.

If you go direct to some theatres, they will also waive booking fees for shows booked more than 10 weeks in advance.

Don’t forget the potential to secure deals through voucher codes and other discount sites.  Groupon, Wowcher and Last Minute all have theatre offers.

5. Special Events For London Theatre On A Budget

Get Into London Theatre has seats on offer for £10 each.  This is a New Year sale, which runs through January and February.  The hashtag #GetIntoLondonTheatre will tell you more.

LIFT, the stage onto the streets festival, has plenty of productions in unexpected places, as well as arts venues across the capital.  You’ll find out more about it here.

Theatre 503 in Battersea is trying to improve access to shows.  It hosts a Pay What You Can Saturday, where £15 tickets are available for what you can offer.  Similarly the Arcola in Dalston has a Pay What You Can Tuesday for Studio 1 and 2, where the suggested admission is £5.  Soho Theatre offers performances for a tenner, and also has touring productions across the country, if you’re outside of London. 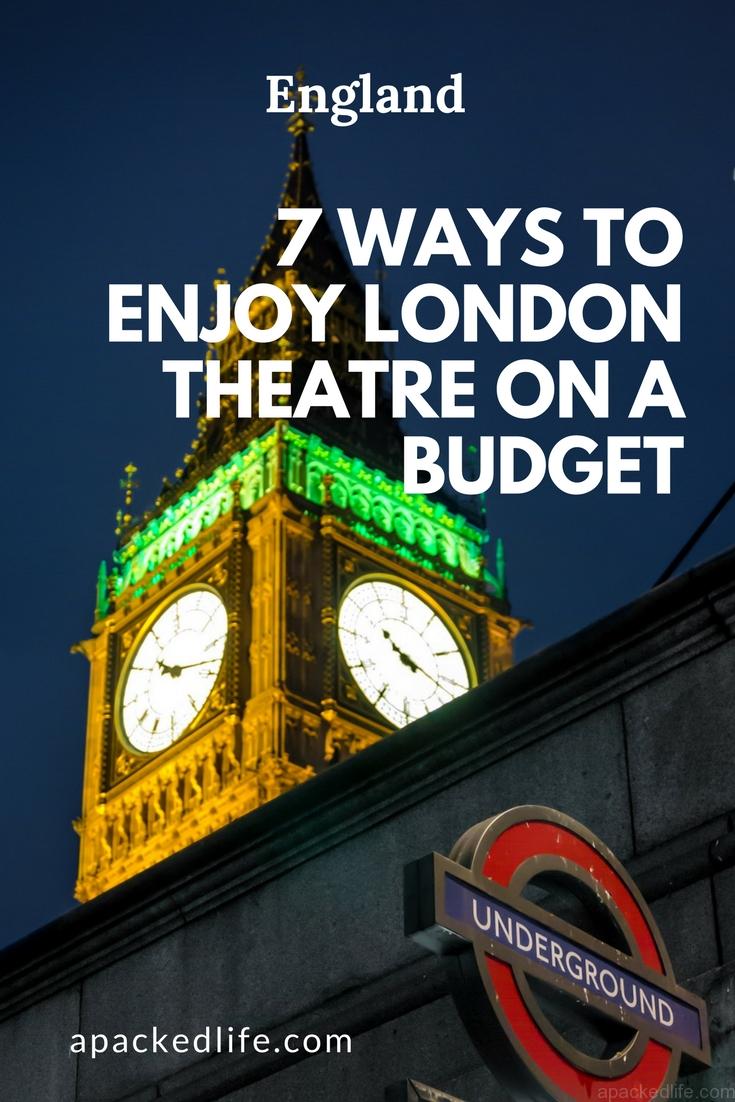 Matinees are usually cheaper than evening performances.  As such, they’re a great option for cheap theatre tickets in London.  They can also work out very well if you want to stay outside of London that night, or if this is a day trip.  From home, we can be in the capital for midday very cheaply by train, have lunch, catch a matinee, enjoy some live music and dinner before hopping the train back, and all for modest spends.

Sometimes there is a period where a new show is settling in.  At this time, you might get the option of cheap London theatre tickets, which allow you to see the performance for less.  Here’s how the Royal Court Theatre describes a preview show:

FIRST LOOK TICKETS
Available on the first three performances of every new Royal Court production. These reduced price performances form part of the development process. Ideas are still being explored and decisions are still being made. The Royal Court Theatre will invite audiences to be part of this process, sharing their views with the artistic team online. Details of how to be involved in this will be emailed to bookers prior to the performance.

That’s a great opportunity to see a show at its freshest, and it’s worth exploring to see if previews are available for any new productions.

You may have heard of seat filling as it relates to the Oscars.  But it also exists in London theatre shows to ensure that there’s a full and receptive house in place for all performances.  Expect to find ground rules about being respectful and appreciative (although that’s surely all of us anyway), and consider joining a club upfront to gain access to productions.  Also remember that if you commit to attend a show, you must turn up.  After all, that’s the entire premise.  Tickets tend to be last minute and quick to disappear.

The way it works is that you’ll pay a subscription for a set period of time, which gives you and a guest free access to shows.  Or you pay a smaller subscription, and then a small ticket charge.   On The List, for example has memberships which include either two or four seats, and expects one or two shows to be available each month.  So here two of you could see 3-6 shows for £34.  At the Audience Club, there’s a charity donation of £5 instead of a membership fee, and tickets cost £2.50 plus VAT per person.

The choice will be very random, but then that’s part of the charm.  As such, this probably isn’t an option for a last minute trip, but more suitable if you will be in or near London for a while, or visit often.

9. Head to the fringe For London Theatre On A Budget

It isn’t just about Theatreland.  We’ve already mentioned the Arcola in Dalston and Theatre 503 in Battersea.  In truth, it’s not difficult to get to theatres that are in less expected locations in London.  Arm yourself with directions from the ever reliable TFL Journey Planner, and you could find yourself in all kinds of fascinating places.  Most of the smaller theatres, by the way, have a great set of directions on their website, so locating them is a breeze.

The fringe can also offer opportunities to see shows that push your boundaries, from new and inspiring writers.  While researching earlier, I found five shows I’d really like to see at the Arcola.  And that’s not just because it has a passport which entitles you to 5 shows for £60.  Now that’s a bargain, and another benefit of getting out of the centre of London.

Overnighting and other travel hacks For London Theatre on A Budget

Theatre doesn’t have to involve an expensive meal out or an even more expensive overnight stay in London.  Unless you’re building your theatre visit into a pre-planned trip, there are options that can work out to be more cost effective.

Firstly, don’t forget that many nearby venues offer pre-theatre meals, where you can get a set menu that will work fast enough so as not to make you late for your show.  Equally, you could just choose somewhere that works for you.  My favourite pre-theatre hack is to eat at Whole Foods Market on Glasshouse Street, which is near to much of Theatreland; whether you want sushi, a burrito or any manner of hot buffet or salad items, it’s here for you.  There’s seating upstairs, and the chance to buy a snack or two (chocolate, of course) before you head on to the performance.

If you’re staying out of town, a matinee would be a great choice.  Although the last trains out of London can open up more options to go to a later show.  The last train from London Euston to Birmingham, for example, leaves at 22:30, and there’s a later one from London Marylebone at 23:07.  So don’t automatically assume that an evening event in London is out of the question.

If you decide to stay over, then one of our favourite budget options is the Travelodge at London Euston.  It’s brilliantly situated for both the Eurostar at St Pancras and mainline stations at Kings Cross, Euston and Marylebone.  Plus, although we may have been lucky with our room allocations, the rooms are surprisingly large for London, and also very quiet.

We have more about affordable public transport throughout the UK here.  And if you’re in London, why not join us for a look around Shad Thames and Tower Bridge.

If you’d like to enjoy London Theatre on a budget, why not pin this for later! 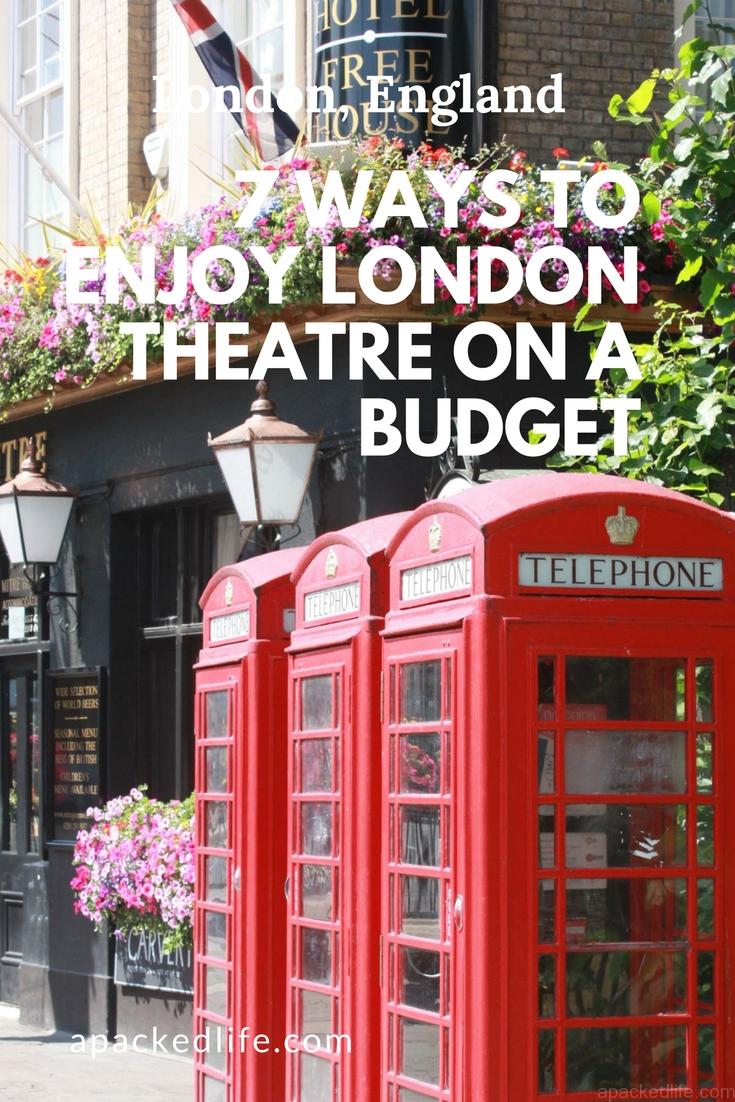