With more than a million visitors making the trip to the Cotswolds each year, it’s easy to see how charming these towns and villages can be.  Full of honeyed stone cottages clustered in river valleys, the commanding hills or wolds create a rolling landscape.  Broadway is one of the most visited villages in the Cotswolds; in fact you could say that Broadway – known as the Jewel of the Cotswolds – is the epitome of Cotswold charm.

Thinking of visiting the Cotswolds?  Why not pin this for later! 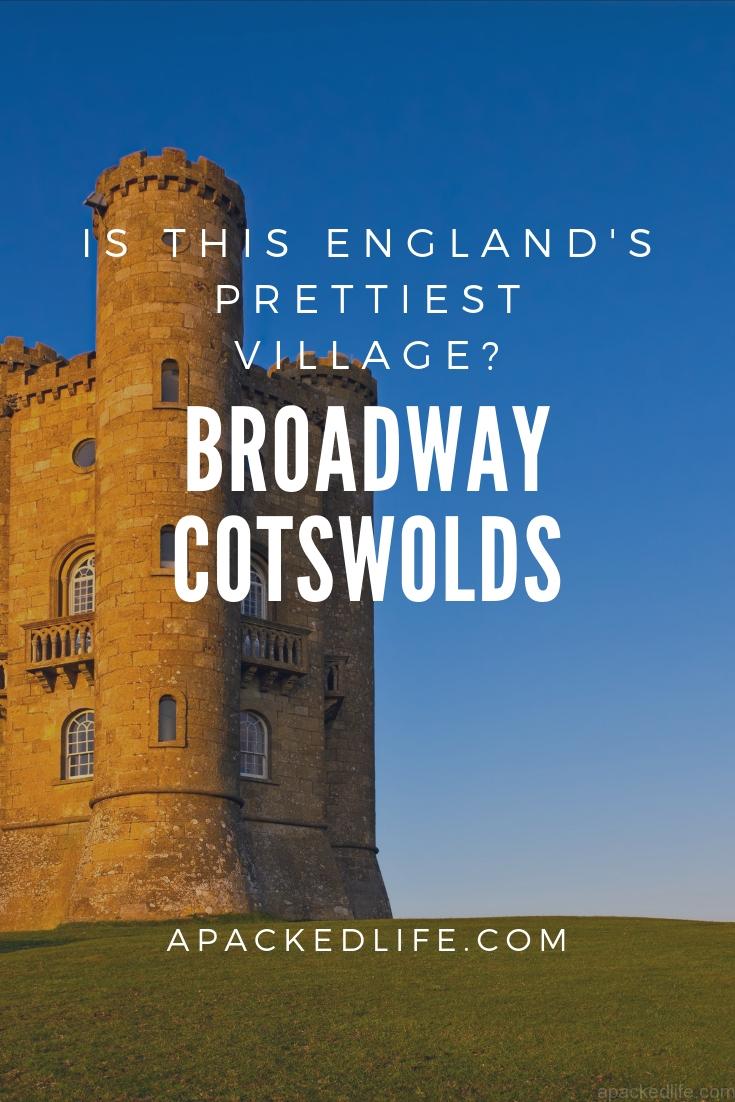 How to reach Broadway in the Cotswolds 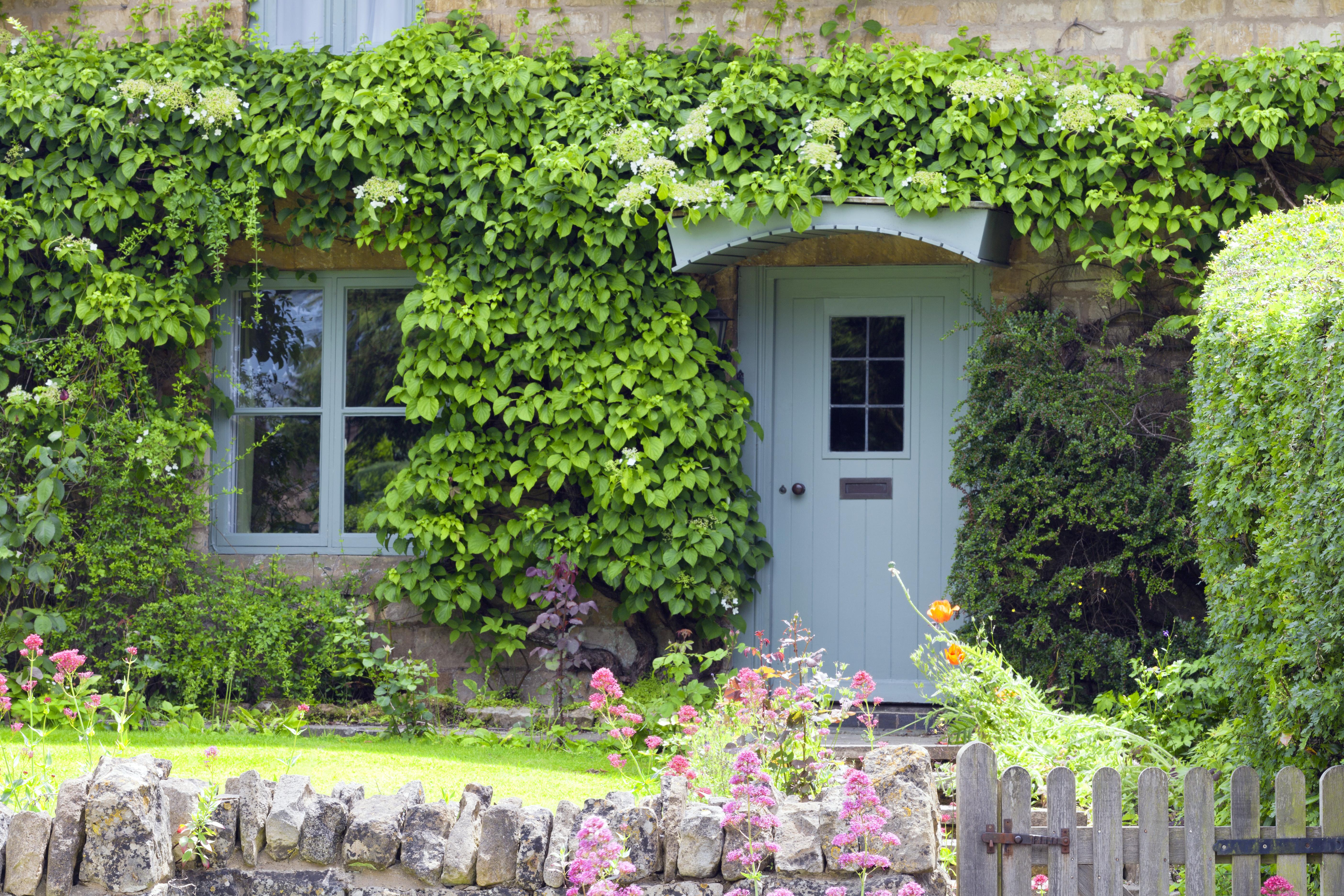 Broadway is easily accessed from Oxford, Stratford-on-Avon and Birmingham.  It is situated in the far south-east of Worcestershire, near the border with Gloucestershire.  Midway between the towns of Evesham and Moreton-in-Marsh, Broadway can be reached via the train service from either station if you are not intending to drive, or else via Honeybourne Station. 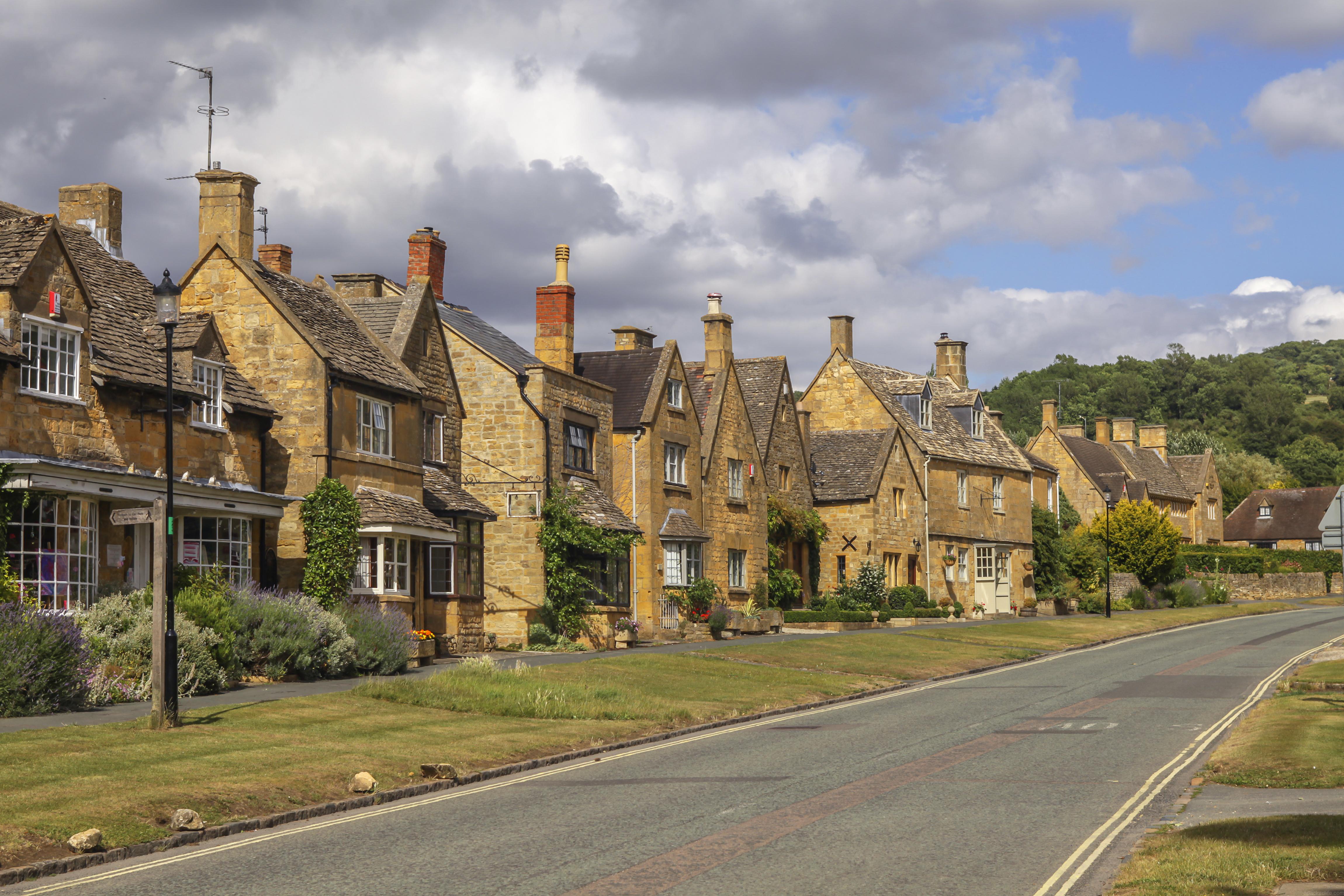 Approach from the Stratford-upon-Avon and Oxford direction, and you’ll find Broadway nestling below one of the Cotswolds’ steepest hills, or wolds.  This gives you a wide vantage point before you head down its slopes to discover Broadway.

As you arrive in the village, you’re treated to the sight of the Broad Way itself.  This is a wide road, lined on each side by grassy spaces and laced with horse chestnut trees.  They add their own bounty to Broadway, with streams of blossoms in spring, then conkers in their spiked green casings littering the ground in autumn.  Beyond the greenery, you catch a glimpse of the glorious Cotswold limestone cottages.  The stone is honeyed and light; in fact you can almost feel the sun bouncing back off it.  There are mullioned windows, gables, patterns in the stonework and intricacies galore.  These are buildings built to be beautiful as well as functional.

Then you’ll notice just how much is available here.  Broadway is not a small village.  There are many places to stay, eat, drink, shop and explore. 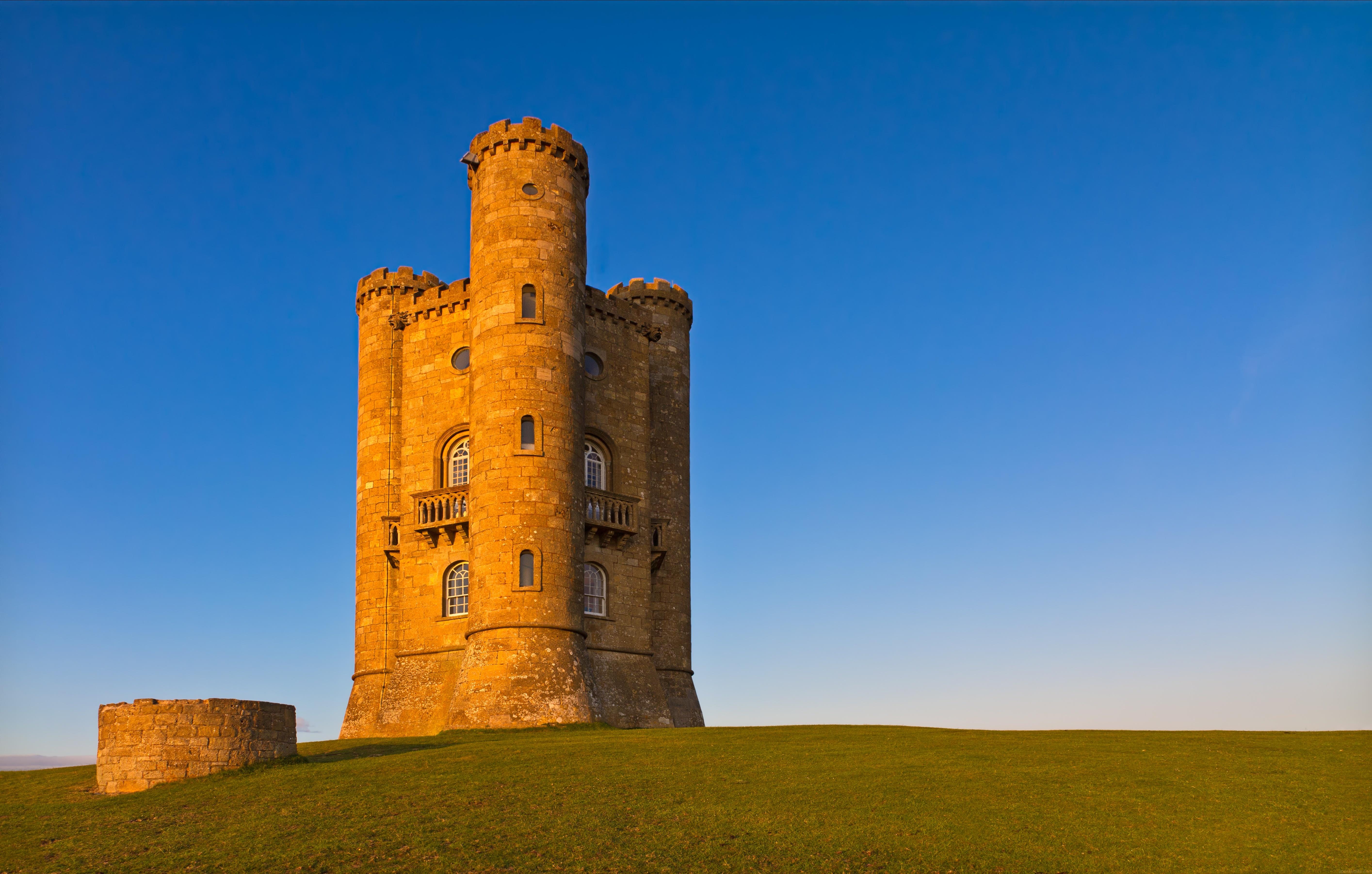 No one can miss Broadway Tower.  Its commanding position on the hill above the village makes it a compelling place to visit.  You can see 16 counties on a clear day from the top of the Tower.

Built in 1798, Broadway Tower is an English folly: a building constructed for pleasure.  Designed by Capability Brown, the Tower is 65 feet high and is the second highest point in the Cotswolds after Cleeve Hill.  Its location is an ancient beacon site, where fires would be lit in times of celebration.  Lady Coventry had asked for a beacon fire to be lit to check if it could be seen from her home.  When the answer was yes, the Tower was commissioned. 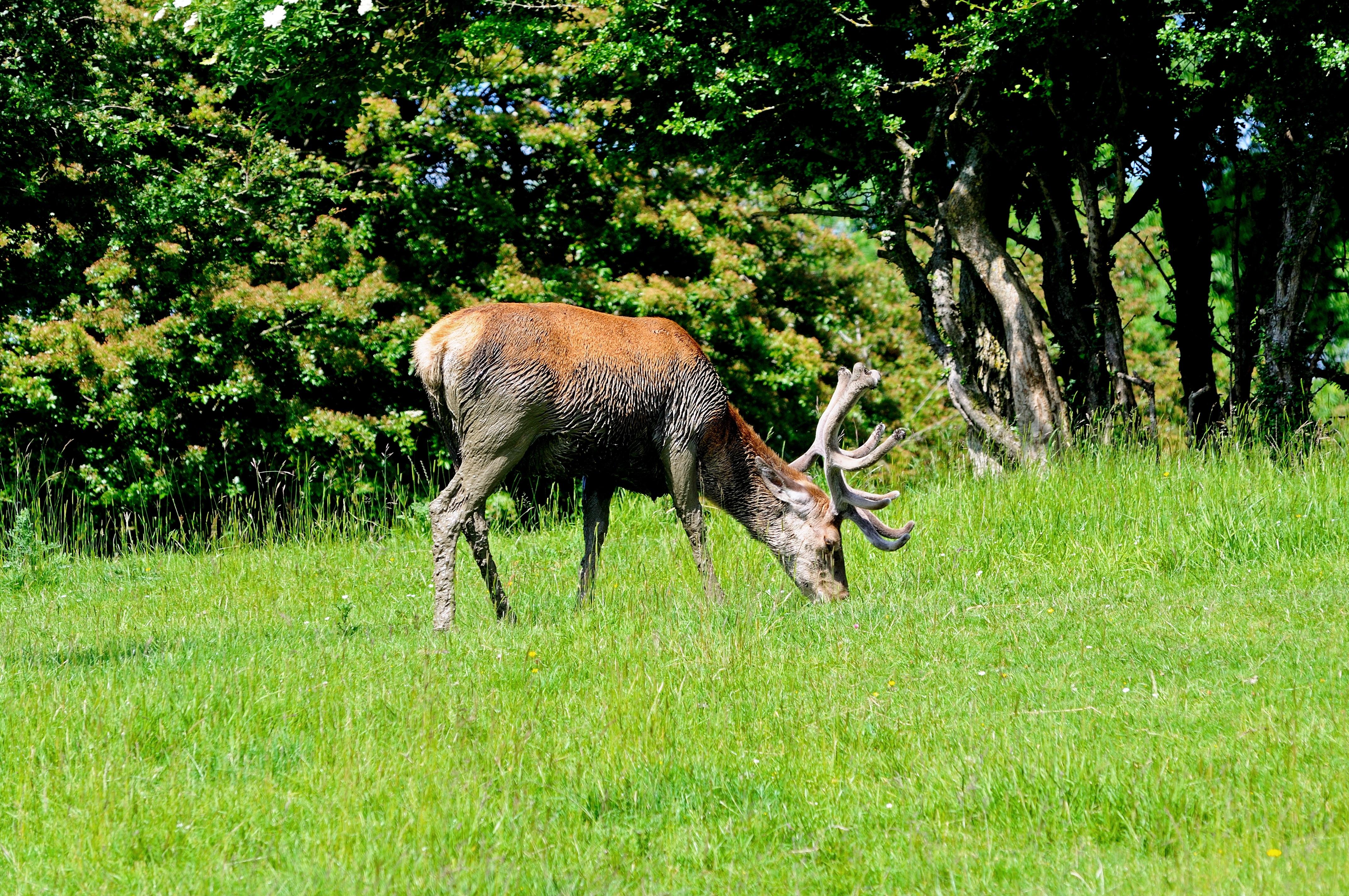 Today, the three floors of the Tower contain a museum to raise funds for its preservation.  The Tower Country Park is home to a herd of Red Deer.  At certain times of year in spring and autumn it is possible to see the deer at closer quarters on trips organised by the Head Ranger.  The Country Park also contains a barn with a gift shop and a tea room.

Broadway Tower And The Printing Press 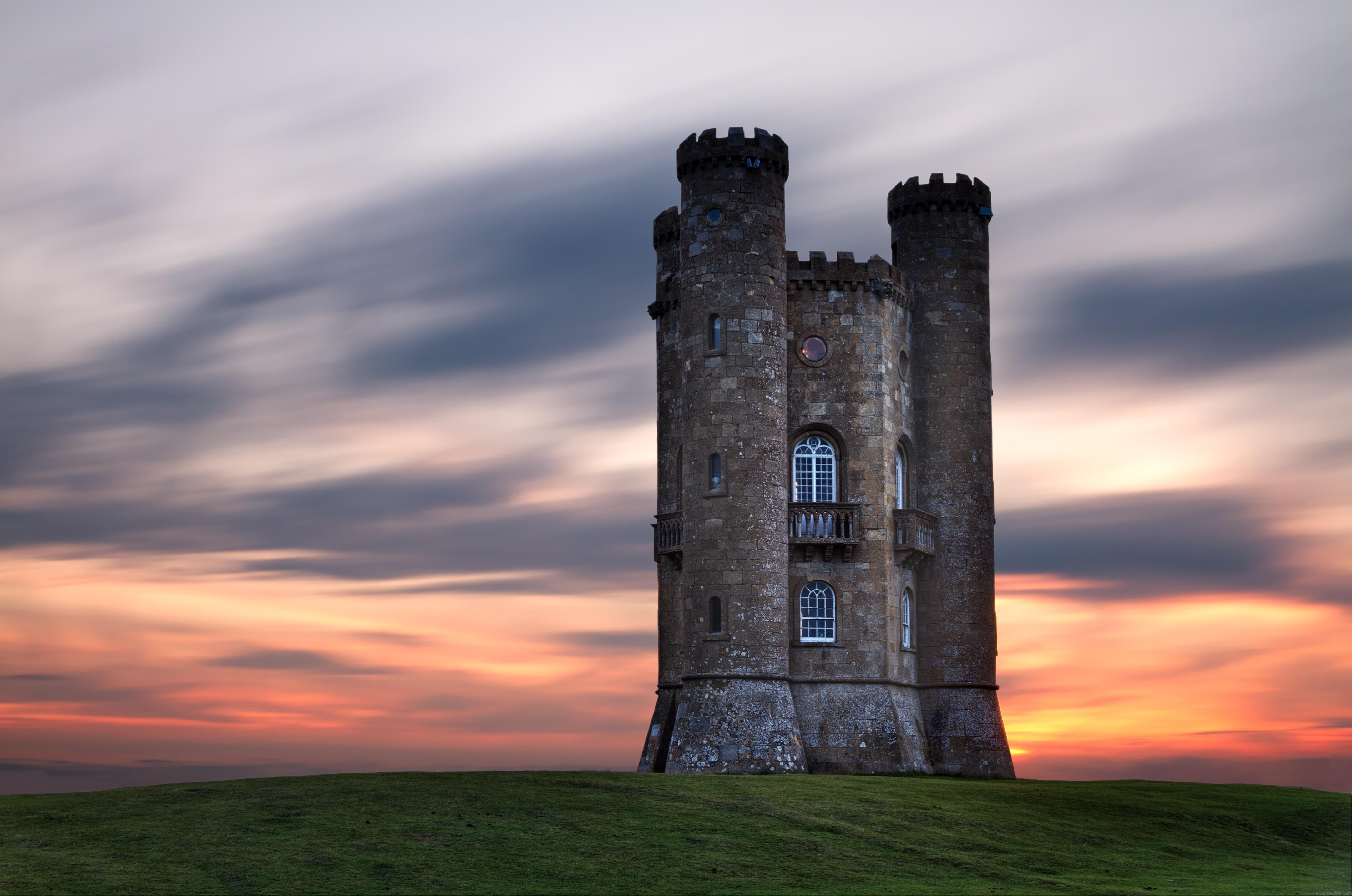 In 1827, the Tower was acquired by Sir Thomas Philipps in order to house a printing press.  A man after my own heart, he then set out on a mission to collect as many of the books in the world as possible.  His collection eventually reached 60,000 manuscripts and books.  My collection has a bit further to go.

The artist and the designer loved the Tower so much that they rented it as a place to relax and seek inspiration.  In fact, William Morris was so inspired by its beauty that it led him to found the Society for the Protection of Ancient Buildings in 1877.  He summed up his feelings about the Tower in the way that only someone who has ever been seduced by an impractical building can articulate:

“The most inconvenient and delightful place ever seen.”

With such a commanding view from the Welsh Mountains to Buckinghamshire, it’s not surprising that someone had the bright idea of making use of the Tower in a strategic manner.  The Royal Observer Corps used the building to track enemy planes across England during World War II.

There’s a sad story linked to the Tower.  In 1943, a bomber crashed into Beacon Hill a short distance from the Tower.  The local farmer tried to save the crew, but they were too badly injured.  You’ll find a memorial on the site.

During the Cold War, Broadway Tower was given the role of monitoring nuclear fallout in England, with an underground bunker being built close to the Tower.  It was staffed from 1961 until stood down in 1991.  You can read more about a similar bunker at Hack Green Secret Nuclear Bunker here.

The History of Broadway Village 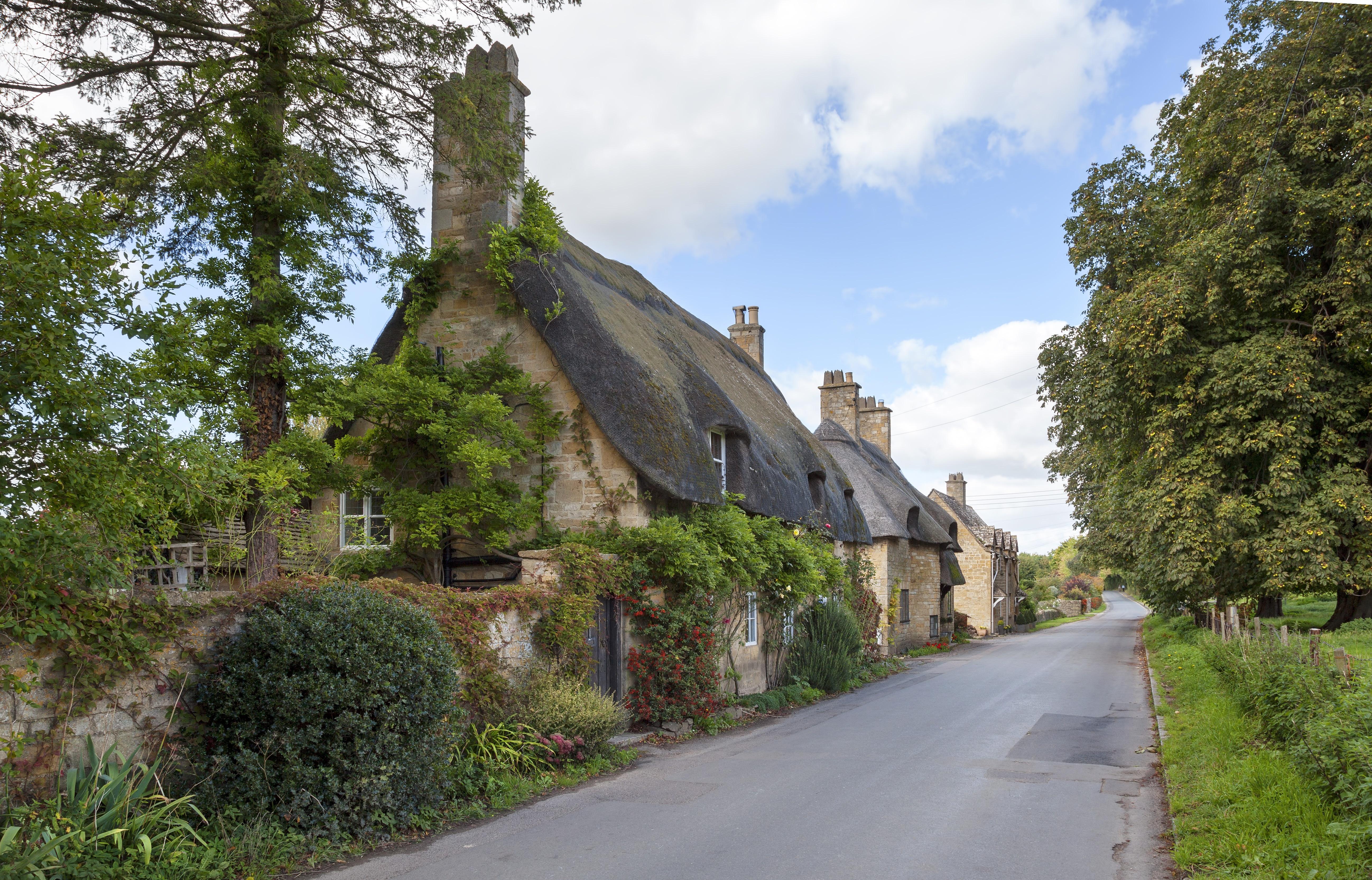 There’s been a settlement here for more than 5,000 years, with hunter-gatherers making flints in Mesolithic times.    It may be one of the first partly settled sites in England, and on each trip I make there, I can understand entirely why this would be.  It’s the kind of place to make you stop and put down roots.  Roman artefacts have been found here, alongside evidence of medieval life.

Broadway was formerly a domain of Mercian kings.  The Domesday Book records that there were 30 hides paying geld, 3 ploughs and a priest.  I was intrigued to see that its earliest value was recorded as £12 and 10 shillings, inflation having rather extended those values now.

By 1600, Broadway had become a popular stop on the coaching route from Worcester to London.  The steepness of Fish Hill made a good living for the village, requiring additional horses to be hired and hitched to aid the climb.  Tolls were collected at Turnpike House – now Pike Cottage – in the village.

Once the railway opened nearby in 1852, the village became rather more chilled.  Its beauty began to attract artists, composers and others seeking inspiration.  The composers Vaughan Williams and Elgar visited.  Others attracted to Broadway’s charm include John Singer Sargent, J. M. Barrie and Mary Anderson.

How To Spend A Day In Broadway, Cotswolds 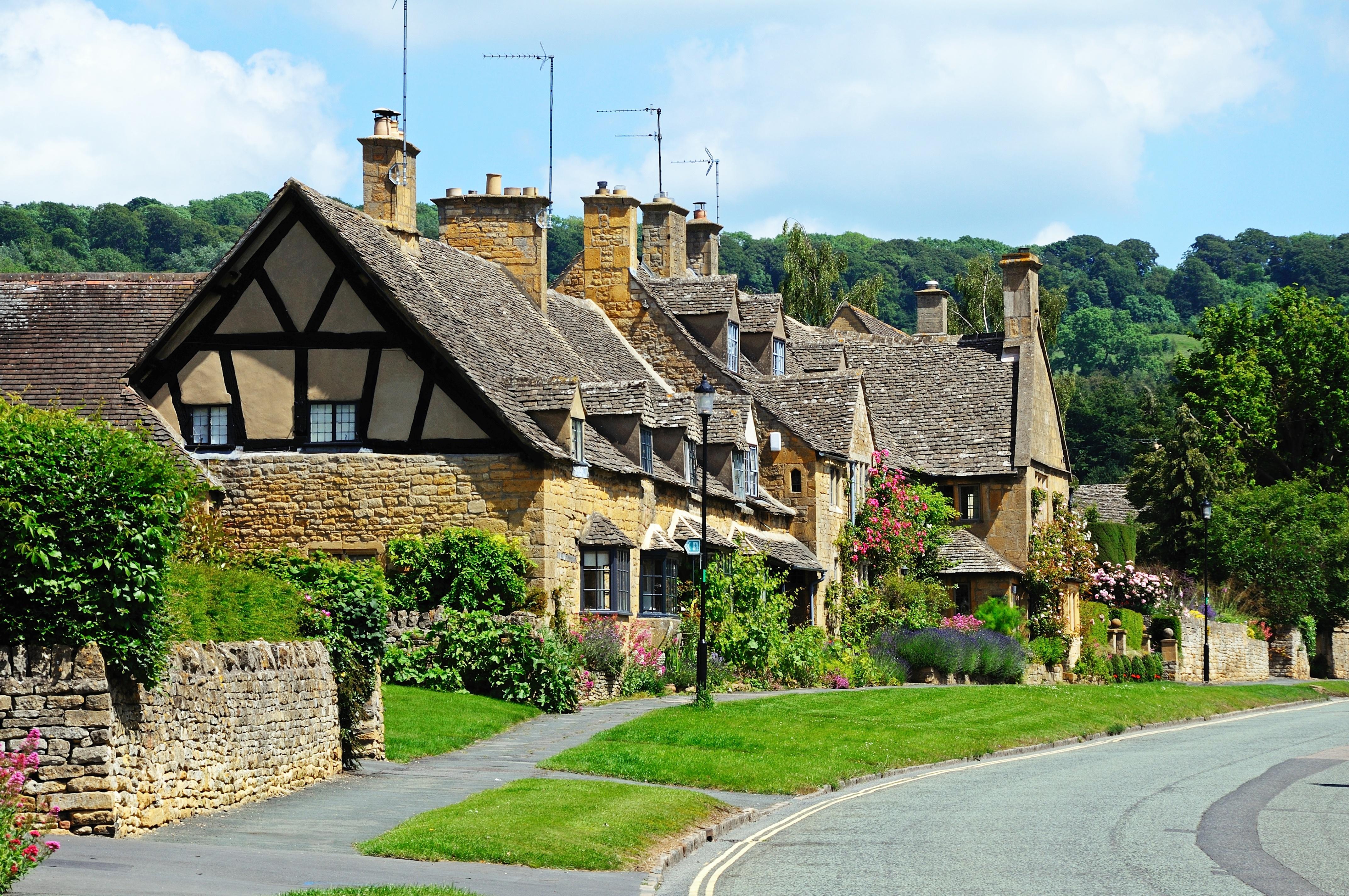 Today’s Broadway is a centre for art and antiques.  It’s a popular place to stay during the Cheltenham Gold Cup, one of horse racing’s biggest events in England. Fancy traveling the way it used to be?  The Gloucestershire Worcestershire Steam Railway runs heritage steam and diesel trains on a line from Cheltenham Racecourse to Broadway. With a round trip of 28 miles, you can enjoy your time chuffing merrily across the glorious countryside, stopping off at some fascinating towns and villages en route.  There are plenty of events throughout the year, so check out their website for the latest timetables. It’s all operated by just under 1000 volunteers, a great testament to the captivating nature of heritage rail travel.

Visit Tudor House and you’ll find the Ashmolean Museum Broadway, sister to its rather larger Oxford counterpart.  It displays objects from the 17th century onwards, and exhibits include paintings by Gainsborough and Reynolds.  You’ll also find Staffordshire and Worcestershire porcelain on display.  The furniture maker Gordon Russell‘s work including his role in the Cotswold Arts and Crafts movement can be seen in the museum that bears his name. You’ll find Broadway’s Tourist Information Centre next door. 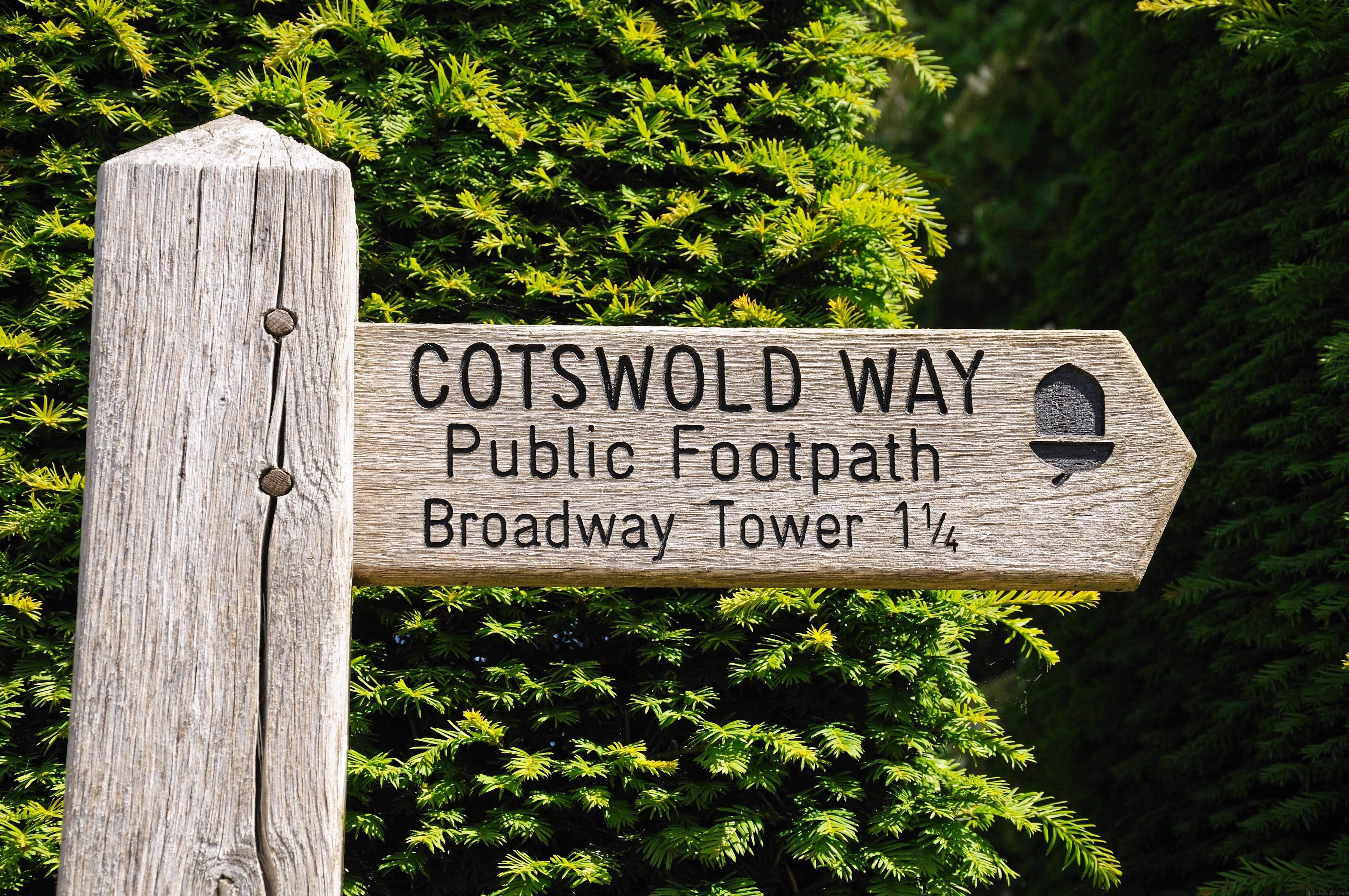 Broadway Hill, the highest point in the northern Cotswolds, is a satisfying if strenuous hill walk.  The village also features access to the Cotswold Way, a 102 mile long distance footpath running along the Cotswold Edge.  It is therefore blessed with spectacular views, from the Severn Estuary and the Black Mountains across to the Forest of Dean, the Malvern Hills and even Gloucester cathedral.  The steep climb to Broadway Tower is its final ascent, followed by a gentle descent to Chipping Campden.  Runners also use the Cotswold Way, the record time for the journey from Bath to Chipping Campden being just over nineteen and a half hours.  You may want to take it at a more steady pace.

Eating and Drinking In Broadway Village 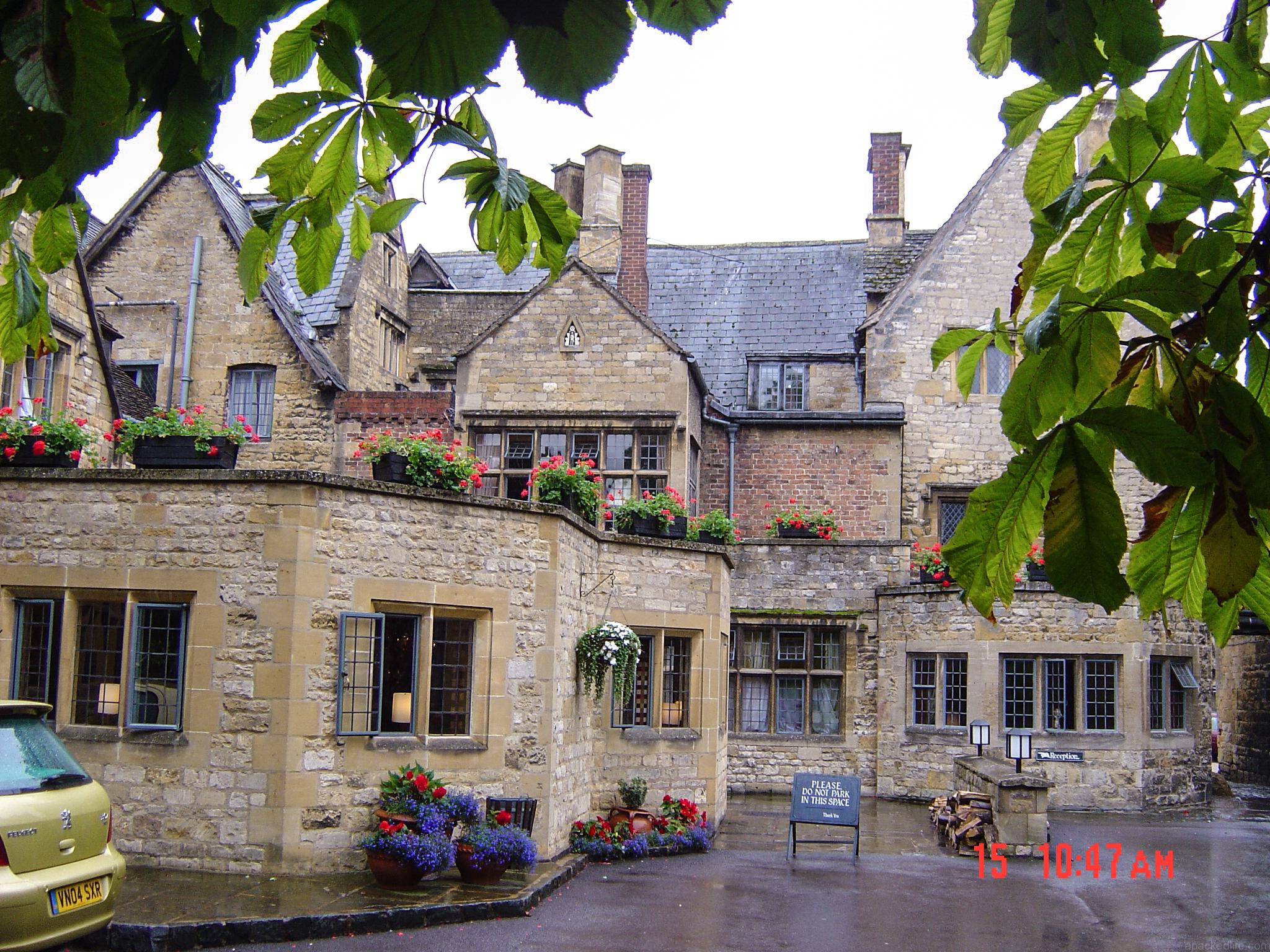 Every larger Cotswolds village has a full complement of tearooms, and Broadway is no exception.  You’ll find a wide selection of options including

Inns and Pubs In Broadway

There are a number of pubs in Broadway, plus some additional countryside choices within a short distance.  You can check out:

There are plenty of choices in this Cotswolds village.  From fine dining to fish and chips, you’ll find it all at:

Places To Stay In Broadway, Cotswolds 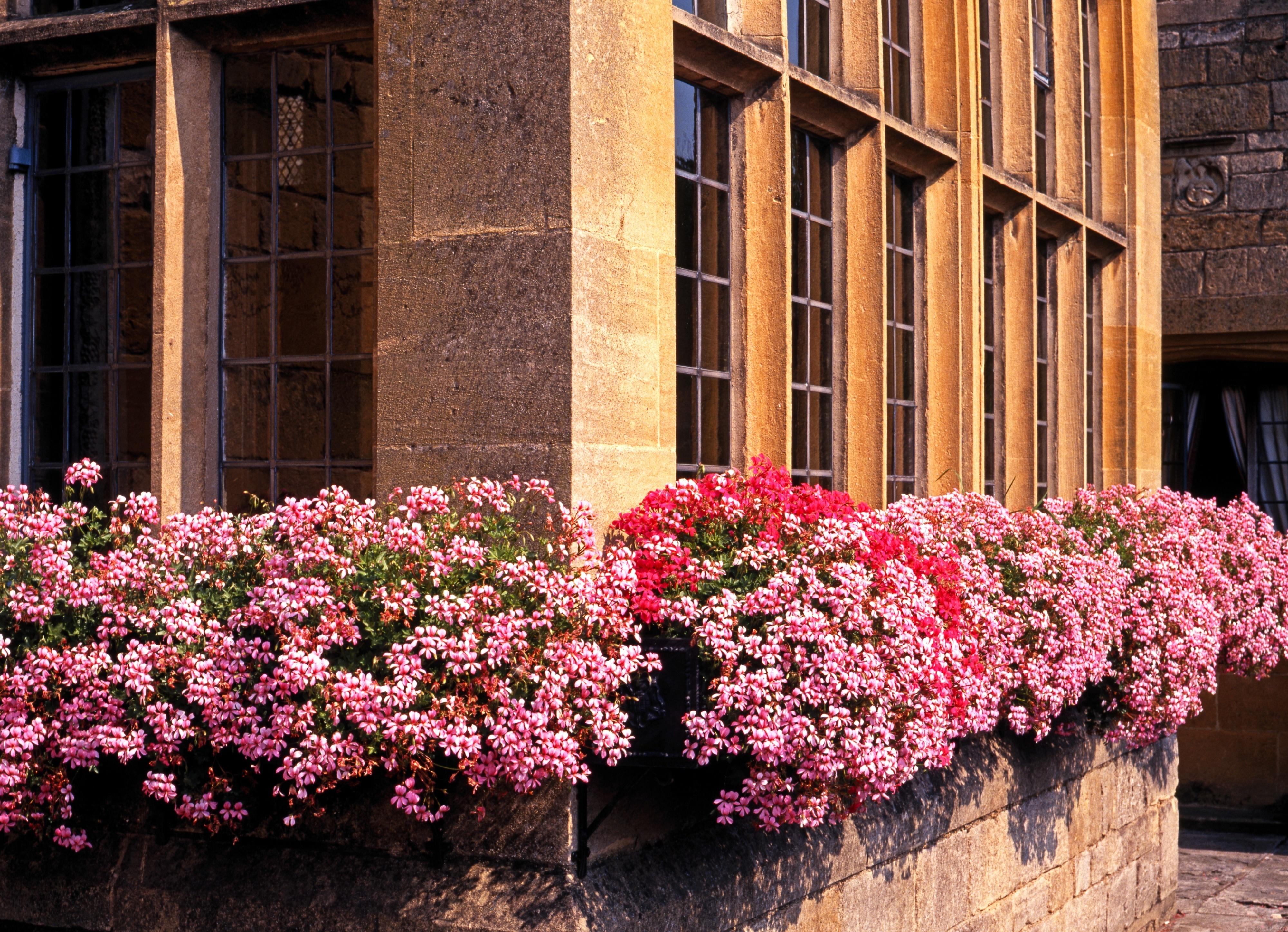 There are also choices to accommodate any pocket or purse in and around Broadway village.  Among your options are:

Other Things To Do Near Broadway, Cotswolds 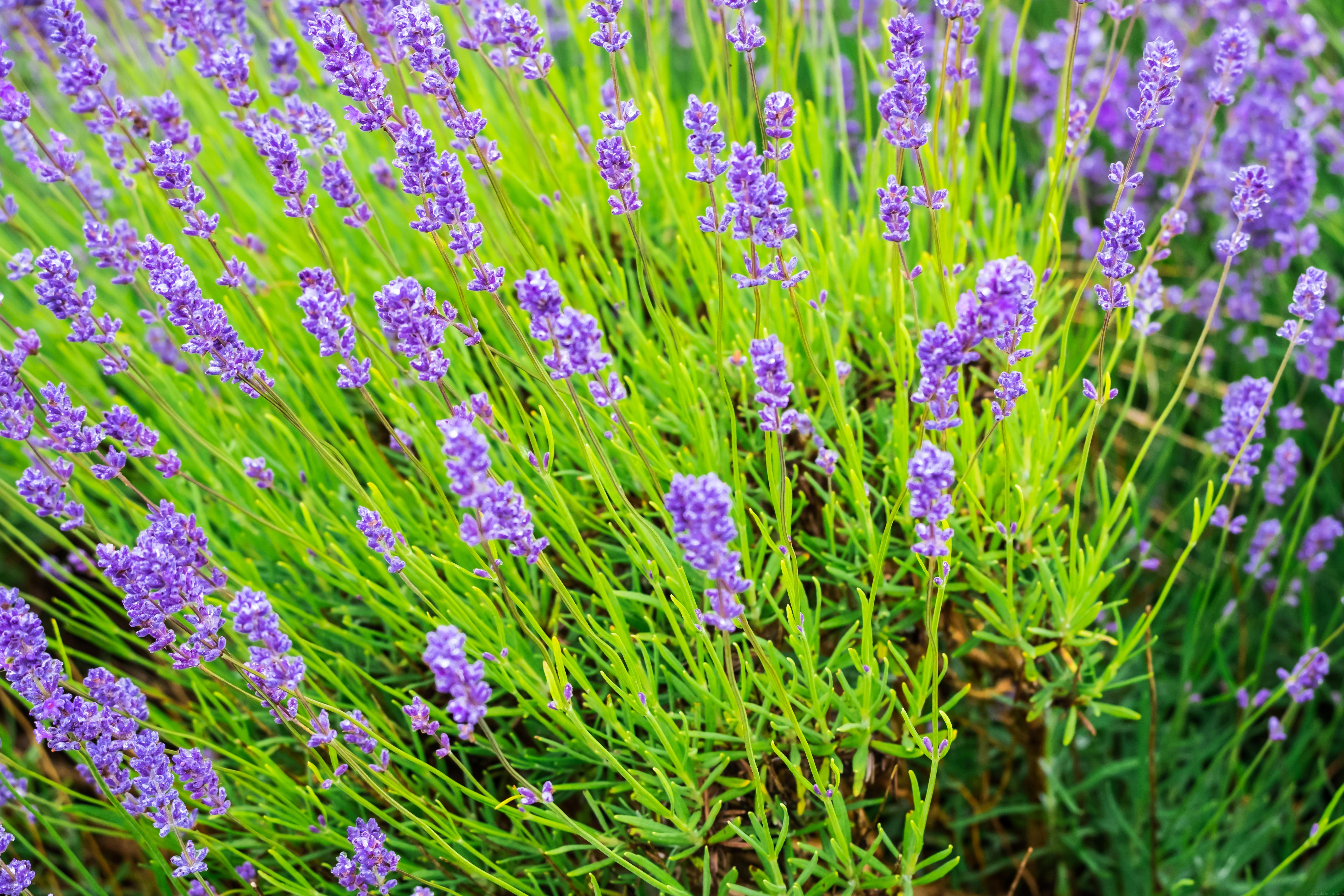 We’ve taken a look at the Cotswolds prettiest villages and towns here.  You’re also in a prime position to enjoy our selection of things to do in Worcestershire, Warwickshire’s countryside, and the Vale of Evesham Blossom Trail.  Want the full on Shakespeare experience?  We have you covered for 24 things to do in 24 hours in Shakespeare Country.

Thinking about traveling to the Cotswolds?  Why not pin this for later. 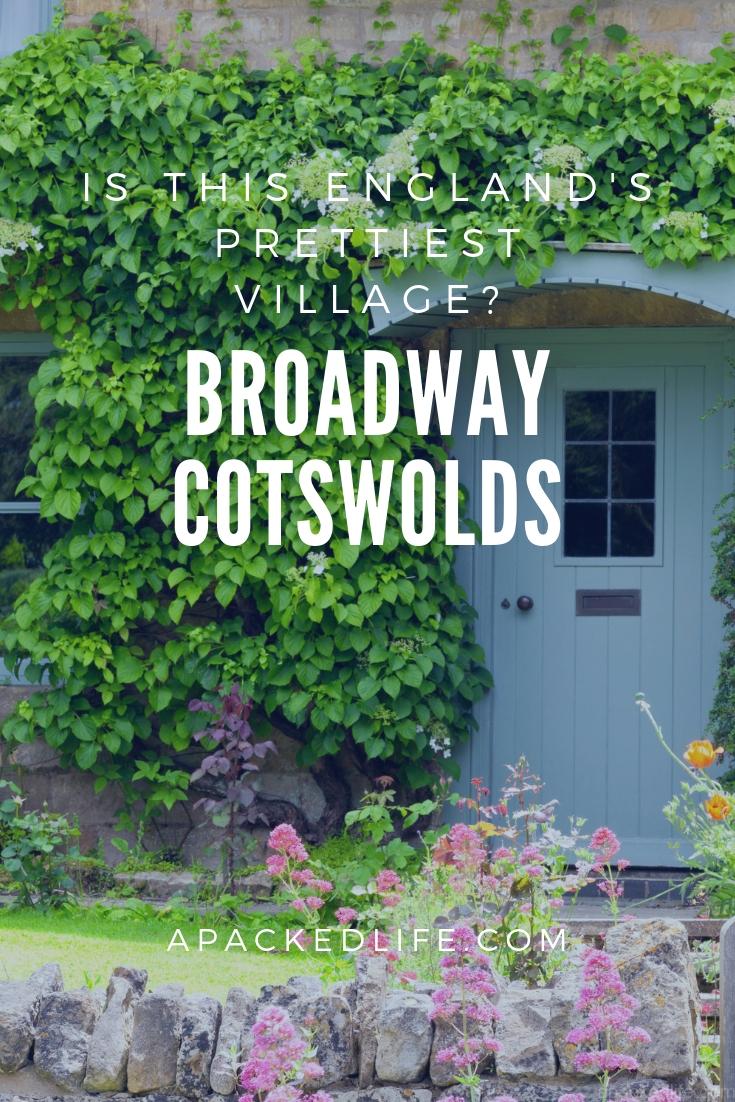 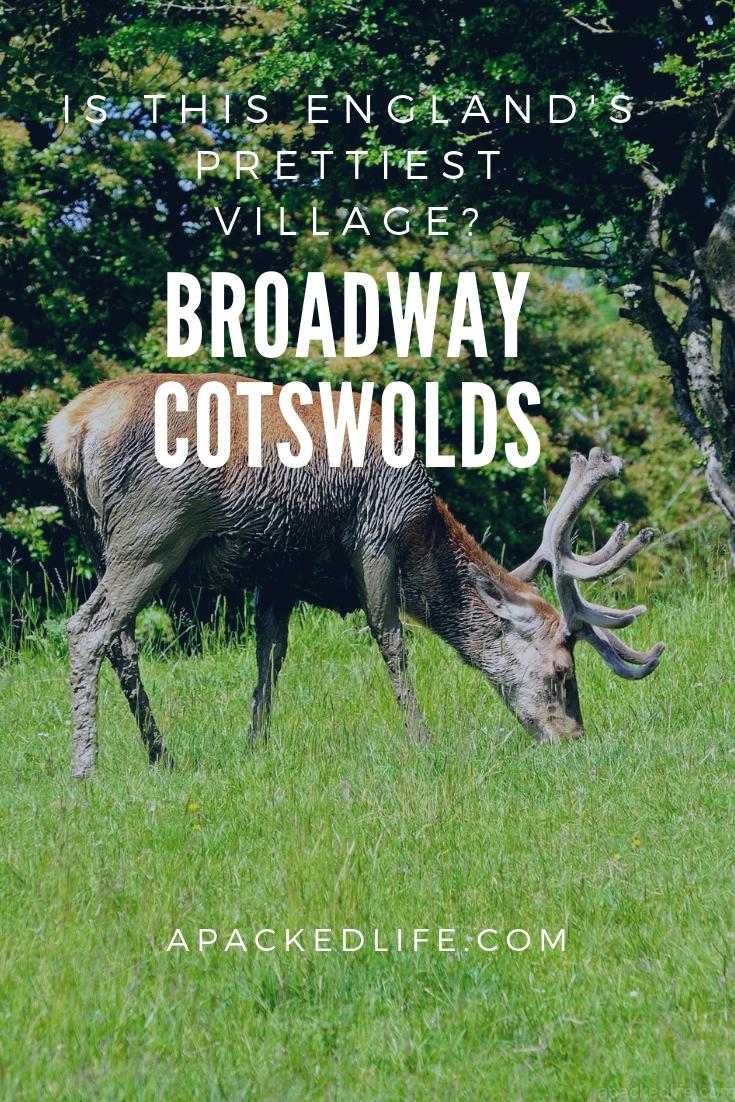 2 thoughts on “A Day And More In Broadway: Cotswolds Charm”