Walking into Brussels Grand Place is a real coup de foudre.  I watched, entertained and completely understanding, as visitor after visitor rotated on their heels to enjoy the full 360 degrees of beauty that exists in the square.  From the gilded guildhalls to the Maison du Roi, it’s a central square that keeps on giving.  I was fascinated to read that the average visitor spends between fifteen minutes and an hour there.  I could spend way longer, just working my way along all those magnificent buildings.  Come with me, and we’ll take a good look around.

Arriving in Grand Place is always an atmospheric experience.  From whichever direction you walk, you’ll find yourself meandering through narrow cobblestone streets.  You can hear the buzz of people before suddenly the space opens up, and you’re in the middle of the massive square. 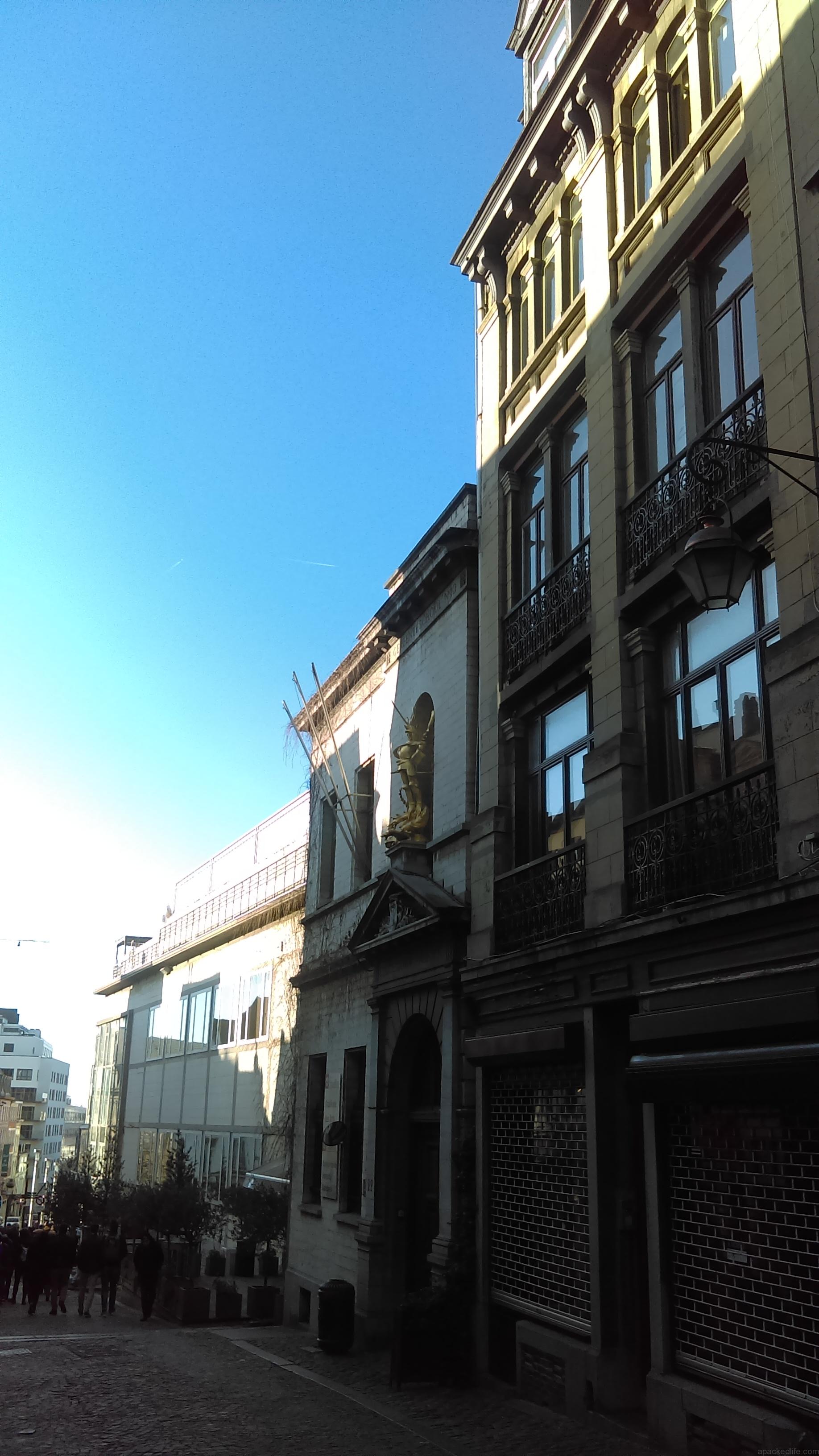 I stood and watched people’s reactions.  Grand Place is so magnificently, jaw-droppingly beautiful, that you can spot those people who have not yet become accustomed to its power.  Most of them stop, abruptly, almost causing the crowd behind them to collide.  Then they look up, en masse, and you can hear a collective intake of breath as they come to terms with the spectacle before them.

The Buildings of Grand Place

There’s an awful lot to take in.  There’s just so much detail.  And wherever you turn there is something else calling for your attention.  Hence the groups of spinning people.  Let’s look round slowly at what’s there.

The Town Hall is the big sandstone medieval building constructed in 1459, and therefore much older than the guildhouses.  It is the only building to survive the French attack of 1695. This is somewhat ironic, as it was the main target of the attack, illustrating that sometimes it’s safer to be in the firing line. 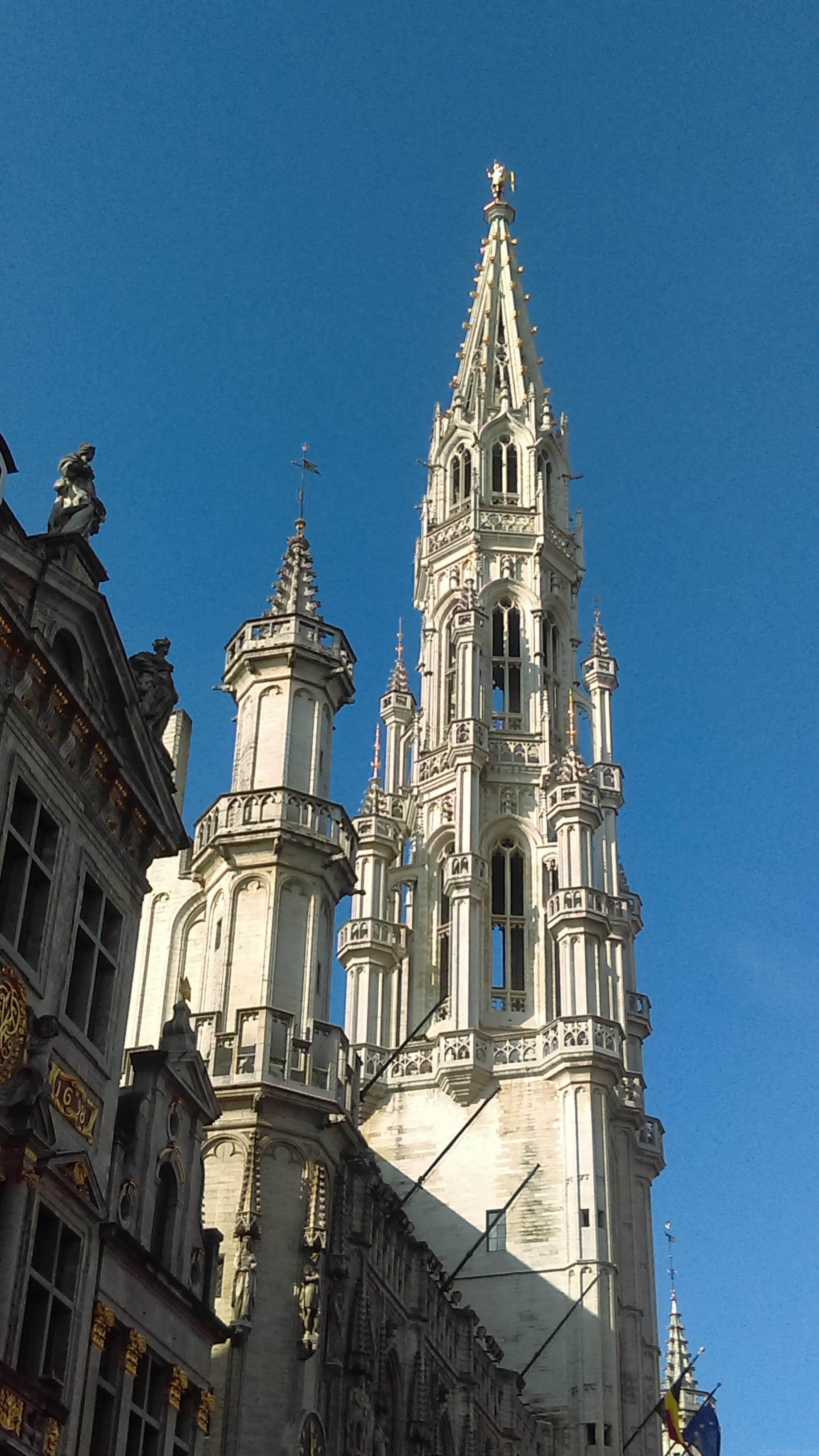 Its octagonal belfry rises 376 feet over Brussels, and is topped by a statue of St Michael – the patron saint of Brussels – crushing the devil underfoot.  Above its wooden gateway are statues of priests, prophets, dukes and dutchesses.  During the First World War, the Hotel de Ville served as a makeshift hospital.  German occupation saw field kitchens set up in the square of Grand Place.

Your eyes aren’t deceiving you; the building isn’t symmetrical.  In fact the left and right parts were built in different stages.

Opposite the Town Hall, La Maison du Roi served as the administrative headquarters for Charles V.  It was originally called the Duke’s House, but got promoted when the duke in question became King of Spain.

It’s a fifteenth century Gothic building, predated by a bread hall which stood on the site in the thirteenth century.  It was later rebuilt in the Gothic revival style after the French bombardment.  The Musee Communal occupies the building today. containing many tapestries and also paintings by Breughel. 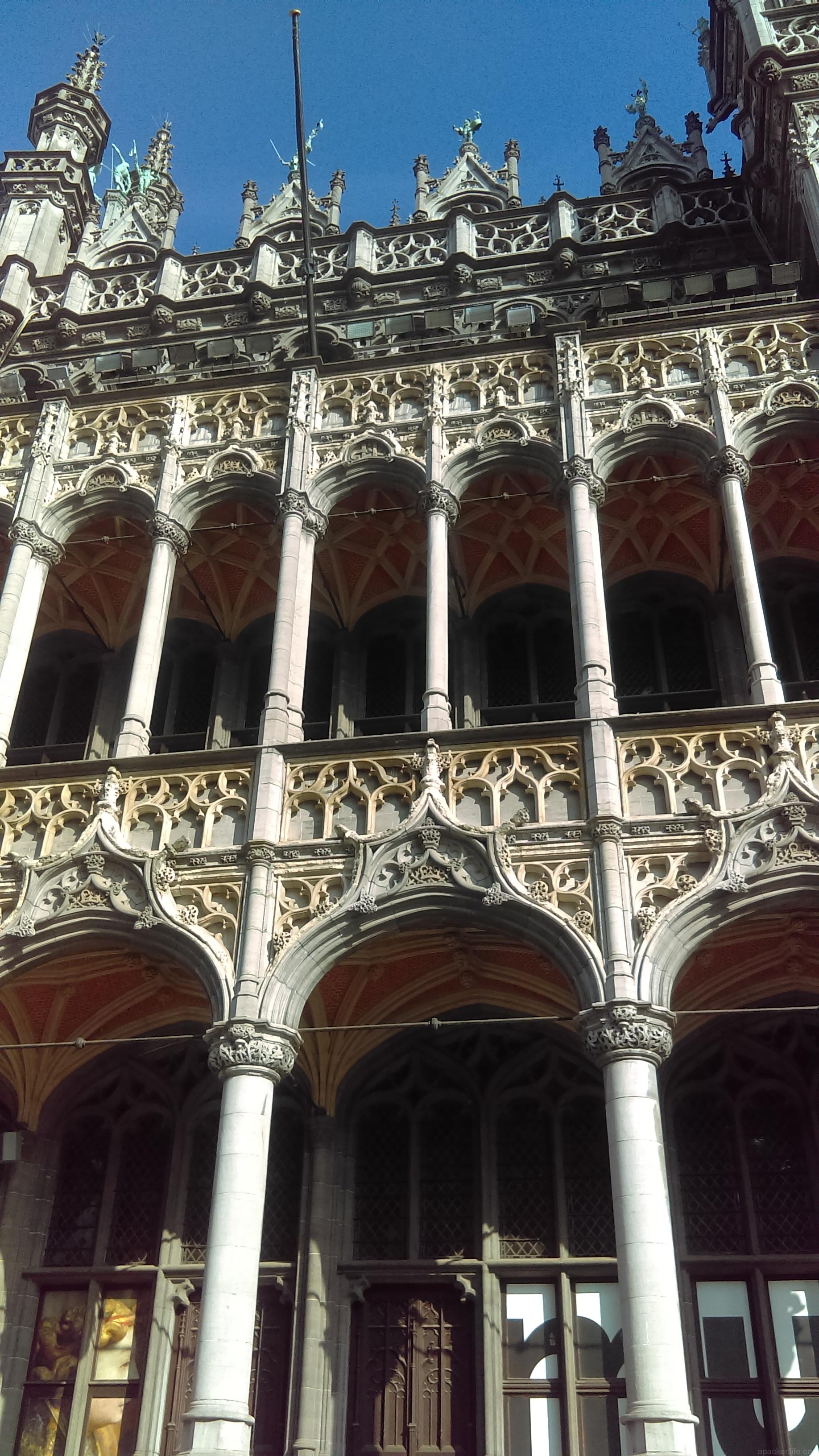 Brussels was one of Europe’s main centres of industry and commerce.  The magnificent guildhouses reflect the wealth that this trade attracted.  Trade in Brussels thrived from 1100 onwards, and the square was built over marshy ground to allow for markets to take place  – hence the Flemish name Grote Markt. 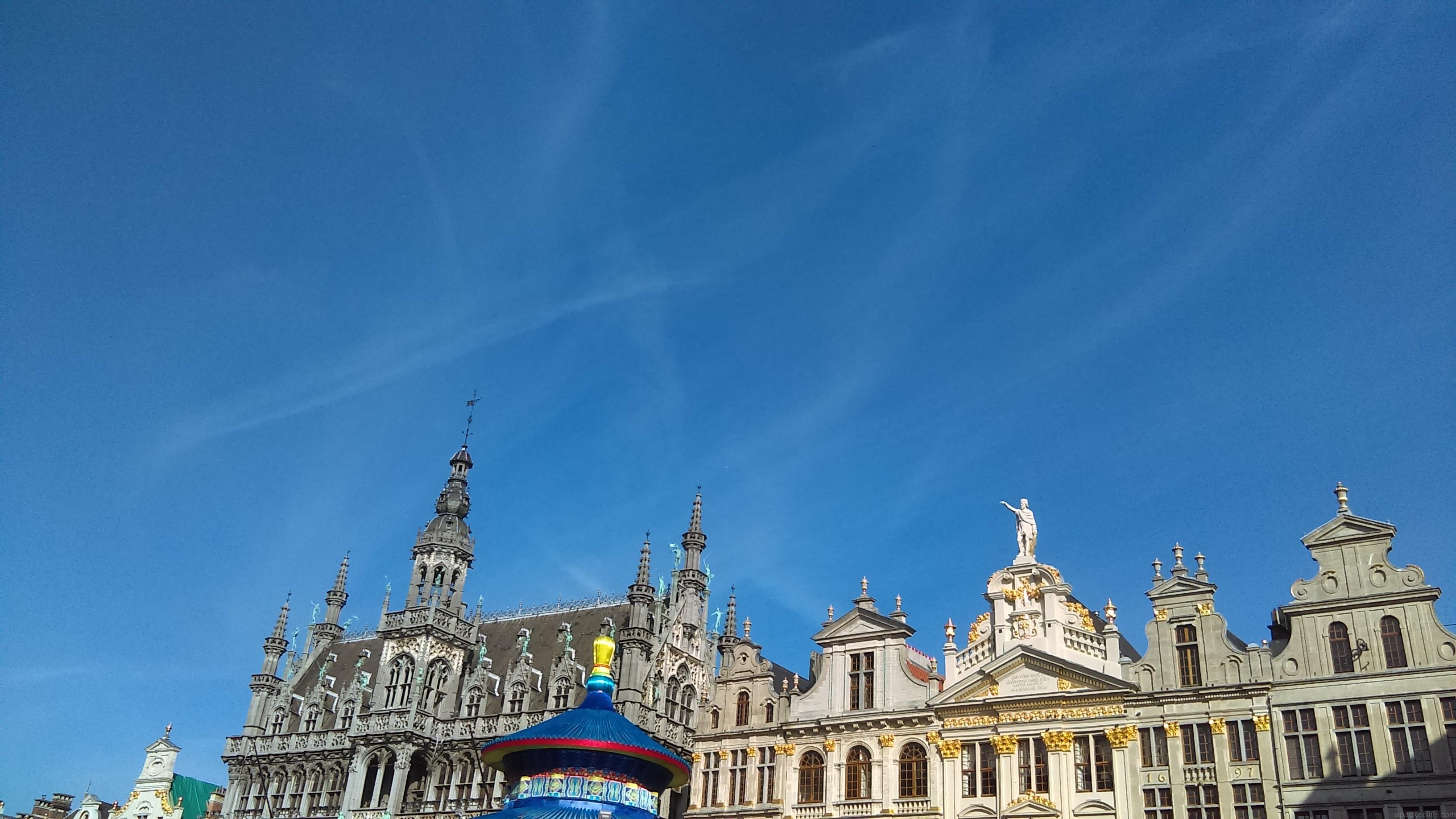 The streets around Grand Place reflect the names of the goods brought to market.  Today Rue des Bouchers is full of restaurants.  There’s also a Rue au Buerre.  Around the corner you’ll find the Rue des Frippiers.

The guildhouses were the centres for commerce and also became powerful through involvement in wars.  The buildings are full of carved symbols outlining the work of each guild.  Although they were destroyed by the French in 1695, the power and wealth of the guilds was so great that the buildings were completely replaced within five years.

Many of the guilds have their own symbols:

You can see a lot more of the influence of the guilds throughout Brussels.  Stop off at the bar Au Bon Vieux Temps, a few minutes walk from Grand Place, and you can see the trades of the city captured in beautiful stained glass.  Travel a little further out to the museum housed in Porte de Hal, the last remaining city gate of Brussels’ outer walls, and you’ll find a space devoted to the ancient guilds of the city. 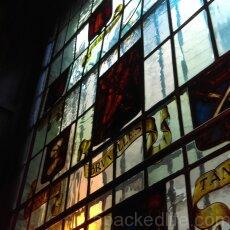 This occupies the entire east side of the square, and comprises a series of guildhouses contained within one enormous building.  Three indoor markets were created at the start of the thirteenth century here.  This both enabled trading to take place in bad weather, and allowed the Dukes to collect taxes from trading.  Trades represented here include millers, carpenters, tanners and wagon makers.  The current large building was a response to the construction of the Town Hall, demonstrating the power of the Dukes versus the power of the municipality.  This medieval oneupmanship has led to a great collection of buildings surrounding the square.

La Grand Place Brussels was added to the list in 1998.  Here’s what the listing has to say:

Around a cobbled rectangular market square, La Grand-Place in Brussels, the earliest written reference to which dates back to the 12th century, features buildings emblematic of municipal and ducal powers, and the old houses of corporations. An architectural jewel, it stands as an exceptional and highly successful example of an eclectic blending of architectural and artistic styles of Western culture, which illustrates the vitality of this important political and commercial centre. – UNESCO World Heritage Convention

The listing goes on to reference the success of Brussels and its prosperity rising from the bombardment by Louis XIV, which destroyed the heart of the medieval city in three days.  The Belgian bourgois elected to rebuild the city in line with its original style, rather than rebuild in a contemporary style, as was often the case elsewhere.

Every two years in August, Grand Place hosts the beautiful flower carpet. A million begonias are set out in patterns.  The first flower carpet was made in 1971, and was so popular that the event continued.

Each year the flower carpet has a theme.  Previous themes have included:

Grand Place is also regularly used for other events.  When we last visited, the square was full of large decorations for the Year Of The Dog.  There was a pagoda, a giant teapot and tea cup and a rather charming mini version of the atomium.  Be prepared to see some interesting sights as Grand Place puts its mark on events in Brussels. 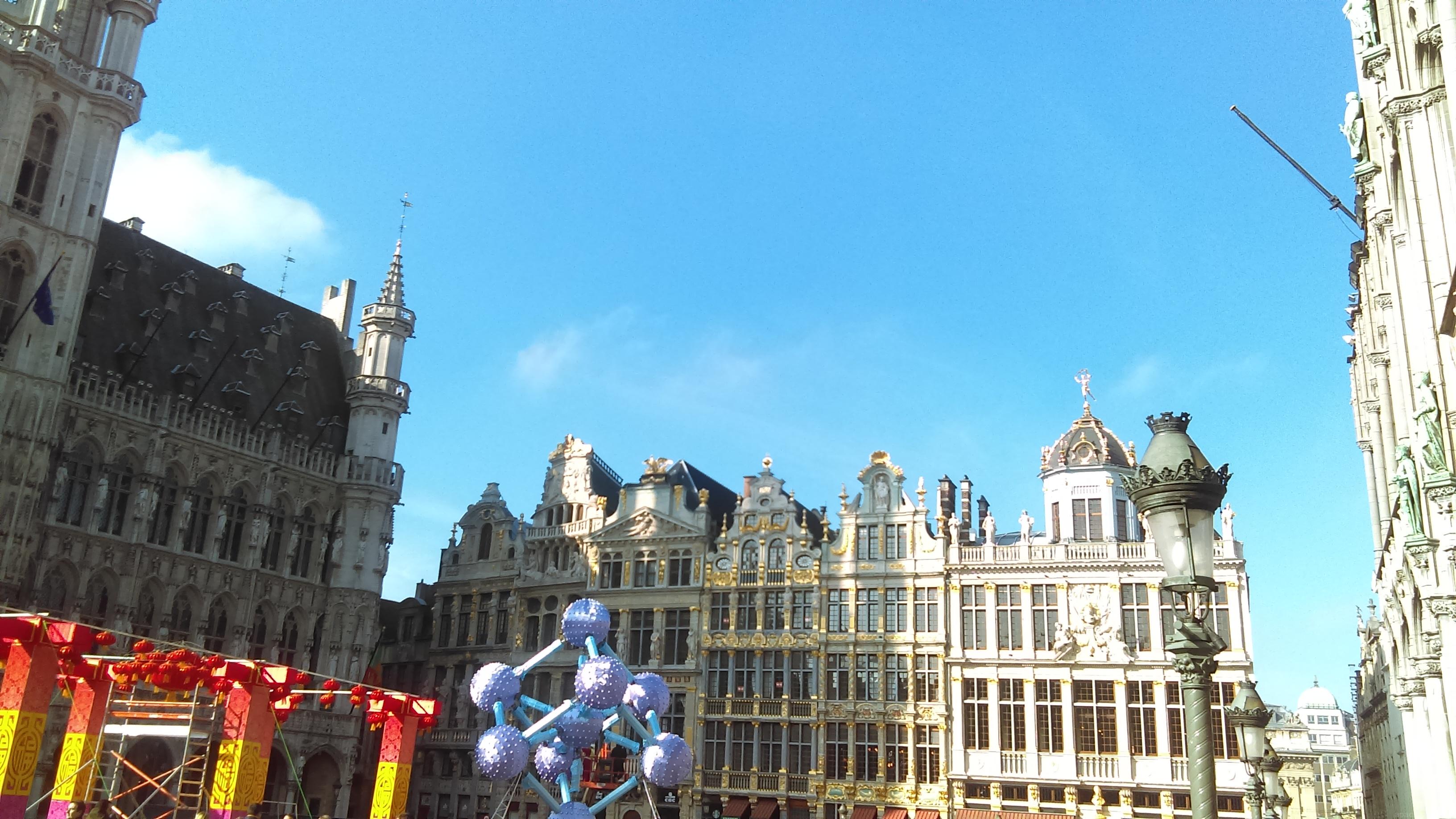 You can check out what is happening at any time in Grand Place by clicking onto its webcam.  Looking at the perspective for the camera, I’d say it’s sitting somewhere above the angelic trumpeter, whose picture you’ll find at the bottom of this piece.

Grand Place can become extremely busy, so checking out its webcam can be a way of assessing the crowd before you head out there.  It is usually quietest before 11am and after 8pm.  Checking it out right now, at just before 10am local time on a Saturday, I can see it’s rather quiet.  I can count seven umbrellas on a Spring morning, two delivery vans and twelve people doing that rotate on their heels camera moment.  Be warned, Grand Place’s webcam can be addictive!

Brussels: Getting to Grand Place

Grand Place is less than five minutes walk from Brussels Central Station.  If you arrive via the Eurostar which is our preferred travel option, you’ll have a ten minute train journey from Brussels Zuid/ Gare du Midi or about twenty minutes from the airport at Zavantem.  Both Central and Midi stations have facilities for left luggage, including some cavernous lockers, so if you want to explore Grand Place before you check in at your hotel it will be feasible.

If you are staying elsewhere in Brussels, the Metro will take you to Central Station, and then it’s a very short walk into Grand Place.

There are plenty of options for places to stay in the centre of Brussels.  Most of the major hotel chains have offerings here, and many are very close to Grand Place itself, such as the Novotel and the Marriott.  There is also a wide range of other offerings, from hostels to apartments and Airbnbs.

Don’t be put off staying further out of the centre of Brussels.  The Metro (trams and trains) will take you quickly and easily into town from a variety of locations.  You can download the Metro map at the link shown.  Stations are clearly signed, and ticket machines operate in English as well as French and Dutch.  You can read more about ticketing options here.

Brussels Grand Place: Where to Eat and drink

The area around Grand Place has plenty to offer for food and drink.  From swanky restaurants on Grand Place itself, to the Belgian gastronomic trifecta of beer, frites and waffles, it’s all available. 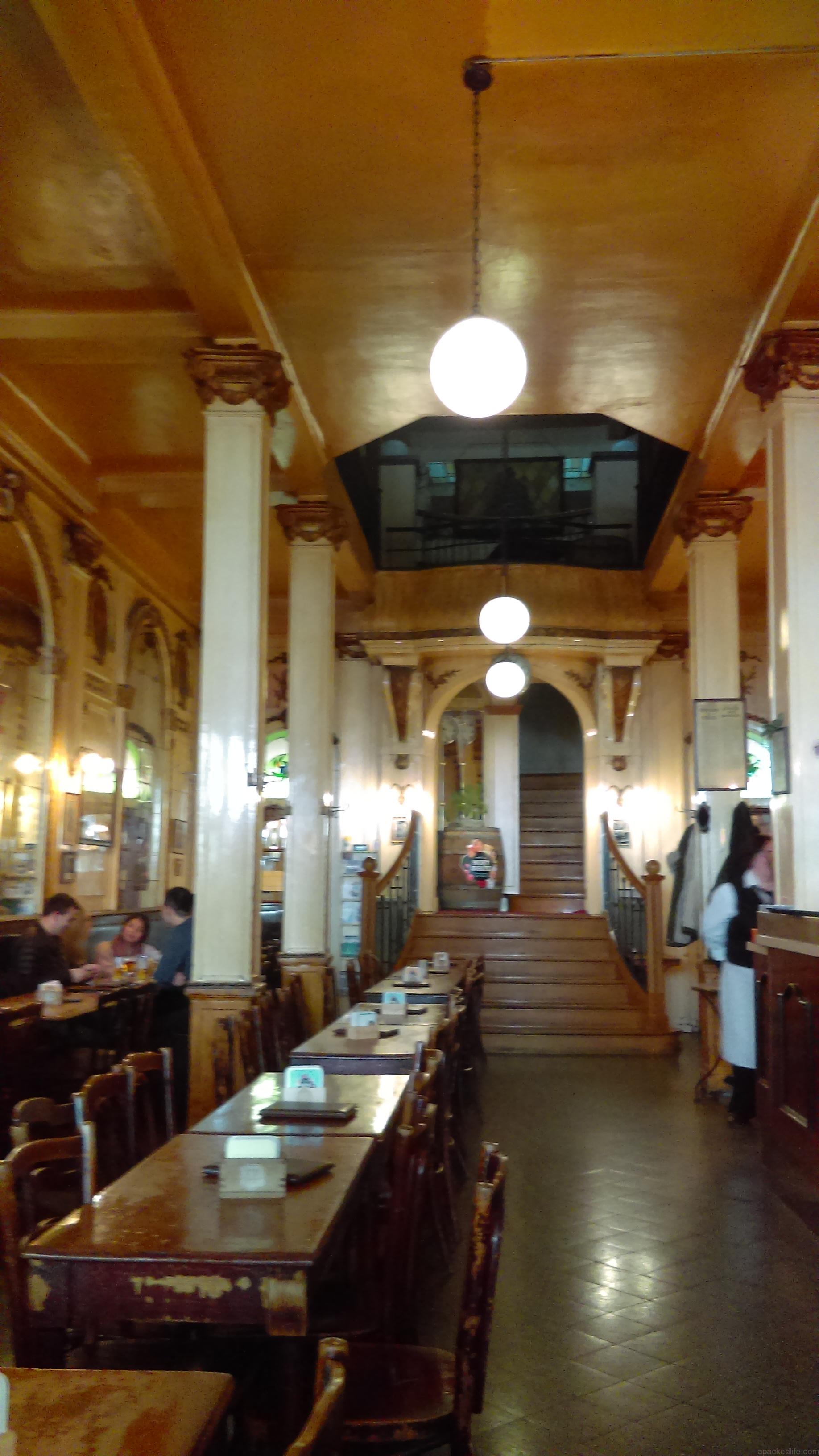 For a variety of grazing options around the Grand Place area, I would recommend the following: 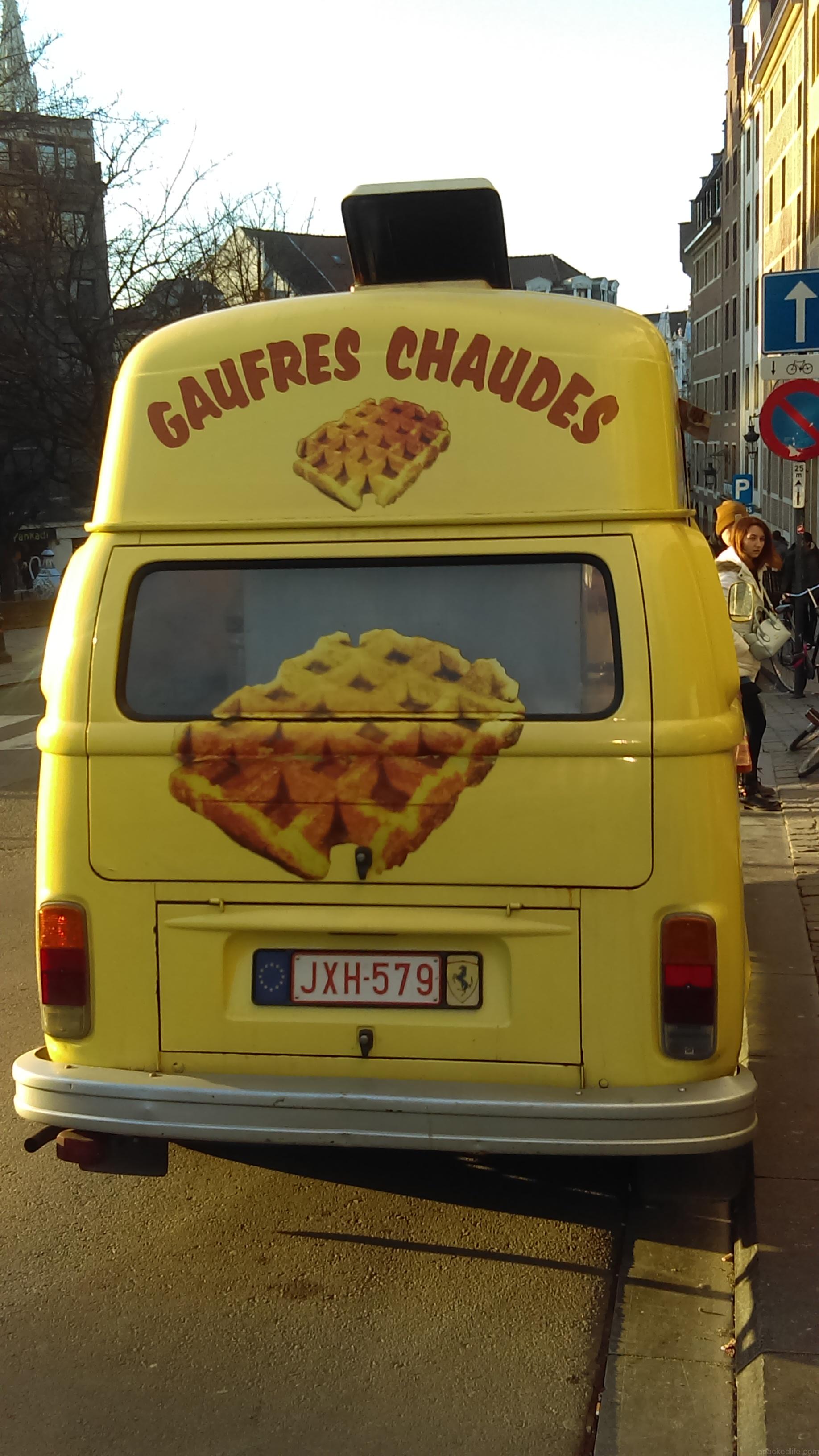 In case a waffle emergency should arise…

More Brussels and Other Delights for Belgophiles

You’ll find more of Brussels here, where I’ve sought out what makes the city tick, and also here, where we visited the Brussels commune of Saint-Gilles, famous for its Art Nouveau buildings.  Less than half an hour away, you’ll also find the university city of Leuven, with a statue as loved as the Manneken Pis and more heritage sites.

Else where in Belgium, we’ve explored the coast via the Kusttram, enjoyed a river trip in Ghent and visited Antwerp for the Christmas market.

If you enjoyed the beauty of Brussels’ Grand Place, why not save these pins for later! 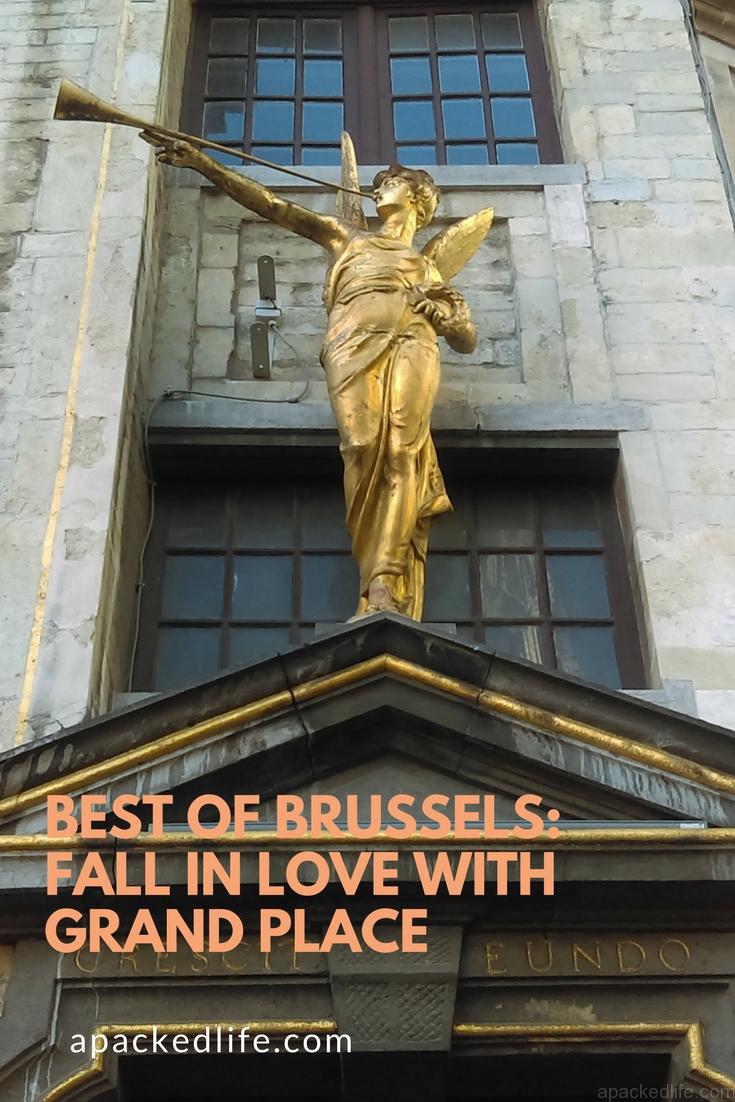 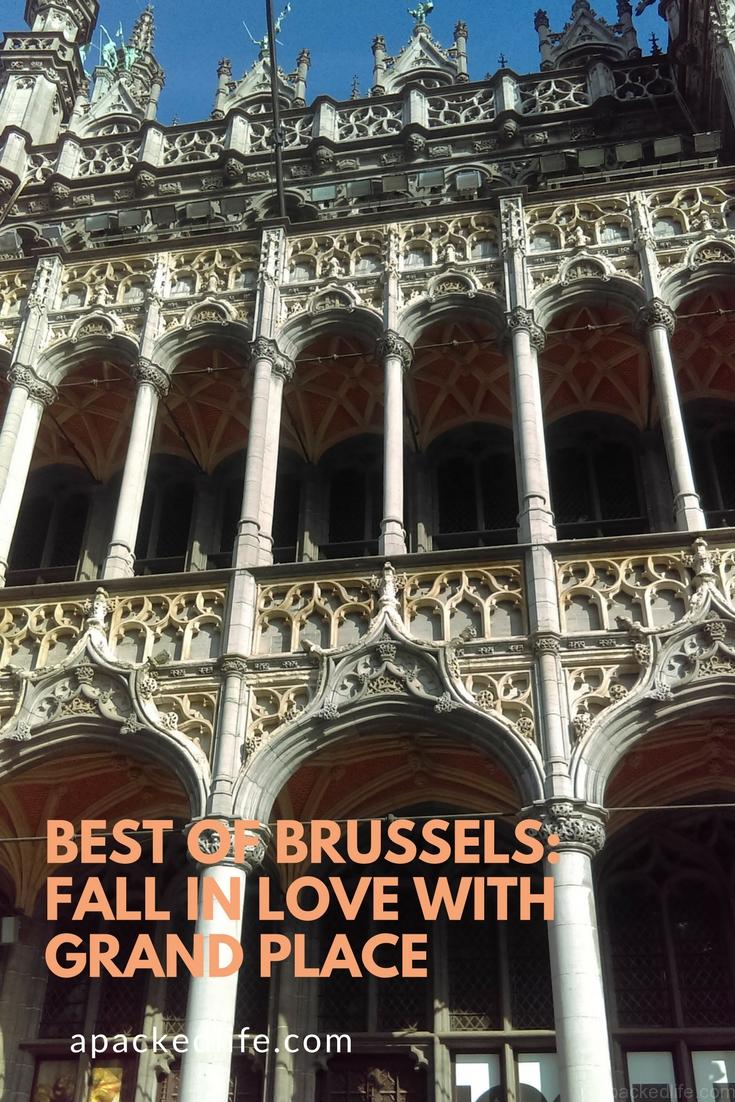 16 thoughts on “Best of Brussels: Fall in love with Grand Place”