I don’t know if, like me, you were ever a fan of the blond quiffed one.  If so, you might remember the incompetent detectives Thomson and Thompson (Dupond et Dupont in the original).  Despite their bumbling, their search for clues seemed to hint at to what to do in Brussels when you’ve already seen the well-known sights.  Armed with some mostly sunny weather, an intermittent map connection and some trusty flat boots, I took some time out to search for a different Brussels.    I wanted to try to understand the Brussels where people live.  And this is what I found.

We all know that Brussels is famed for a number of gastronomic delights: chocolate, moules, frites, beer.  That’ll be all the main food groups covered then.  But what I found out and about was a seasonal appreciation for the joy that is hot chocolate.  Time and time again, in chocolate shops, cafes and patisseries, I bumped into the telltale urns, and signs offering all kinds of flavourings and toppings.  Being allergic to milk, I couldn’t partake, but the smell was a whole new deliciousness in its own right.  So Belgians, I am deducing, are adept at adapting and changing, and finding ever more delicious ways to enjoy gastronomic pleasures. 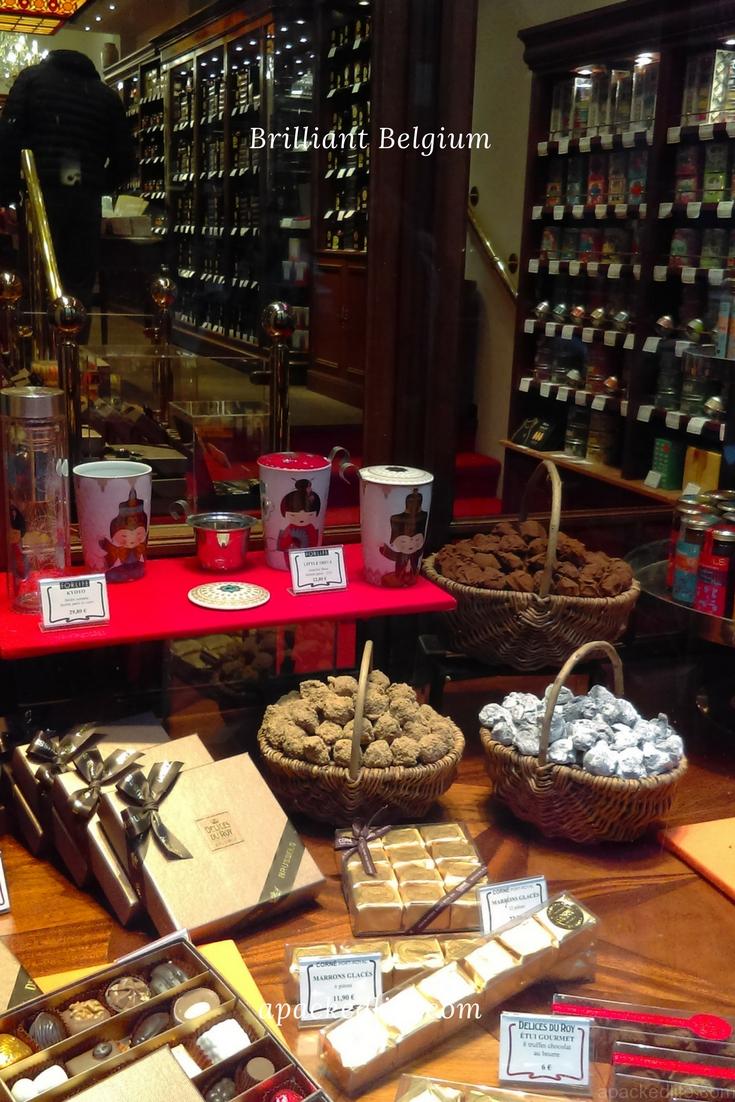 Brussels: never knowingly short of chocolate, whether hot or cold

This rather spectacular clock – the Carillon du Mont des Arts –  forms part of the building outside Square Brussels, the conference centre where I spent my weekend.  It reminded me of the Peeping Tom Clock in Coventry, and also of that fine whirring and buzzing edifice at Stourbridge Junction rail station in Worcestershire.  Emerging from the conference hall at ten minutes to the hour, I wondered if it was worth loitering to see the clock in motion.

A quick chat with the friendly security team revealed that the answer, alas, was no.  The clock used to do all kinds of things, including, as far as I could tell, wind itself up from the rooftop.  But over the years thieves, lured by the price of scrap metal, had robbed it time and again of its moving parts.  So someone with a pragmatic approach had decided to stick it all firmly together.  While it no longer gives an hourly show, to my mind it makes a lot of sense to have preserved its beauty.  So a high (unautomated) five to the practicality of the Belgians.  You’ll find more on the Jaquemart (the Bellringer), the bells and the figures here. 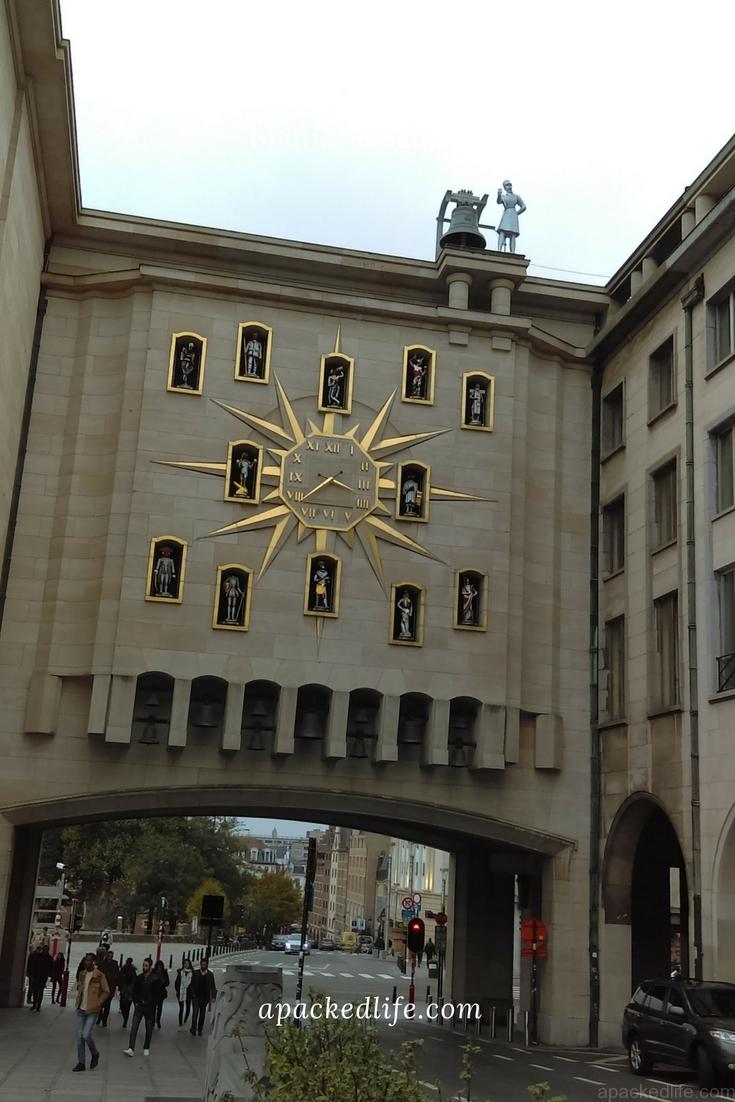 Carillon du Mont des Arts: there are 24 bells and 12 figures representing the history of Brussels.  It was built for the 1958 World Fair.  The figures include Jacques van Artvevelde, symbol of the foreign national resistance, Pierre Paul Rubens and a soldier from the First World War.

In a world where shops increasingly seem to sell very much the same things, it was a delight over and over again in Brussels to see clear evidence of specialisation.  From bookstores with a niche focus to leather goods, to a magnificent shop front entirely filled with every kind of glove known to humankind, there was clear evidence that in Brussels you travel to find exactly what you want. And there are great things we could learn about that approach to retaining a diverse selection of goods for our everyday lives. 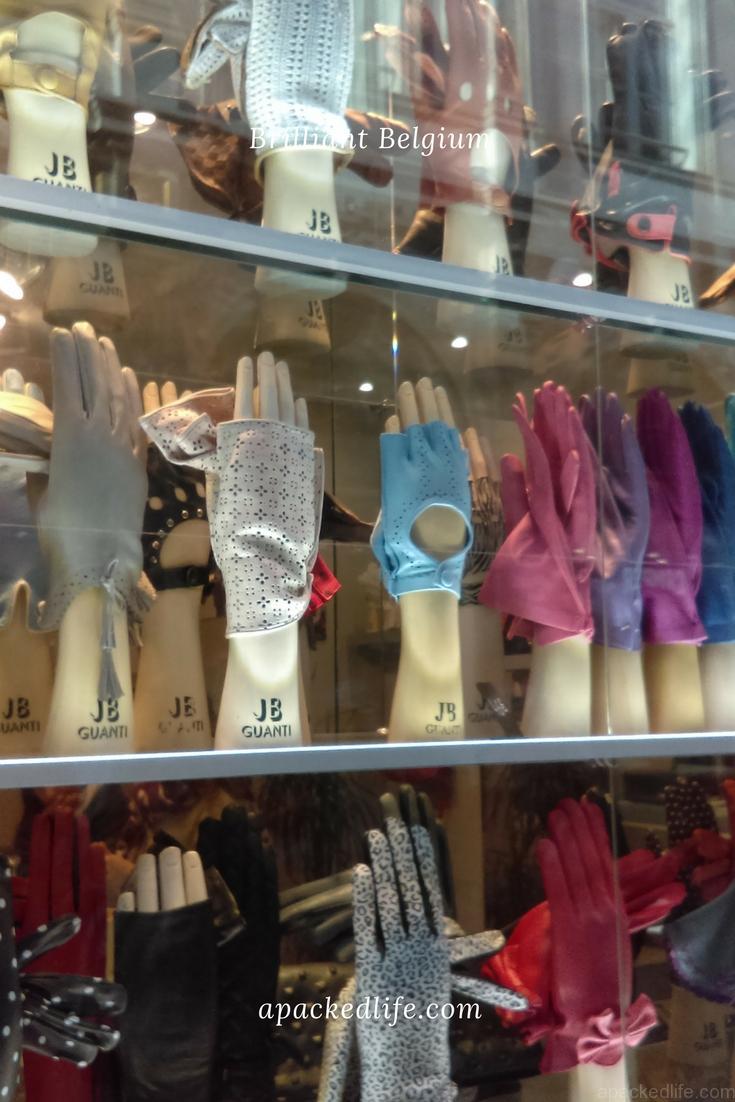 Never an excuse for chilly hands in Brussels

Brussels Clue #4: It’s all in the details High Up

Many times in the Low Countries, there are particular delights in looking up.  Here you see the beauty of the gables so common in Flemish architecture.  Step gables, probably the most common of all, existed to both finish the edge of the tiled roof decoratively, and also to enable access for chimney sweeps and roofers when tall ladders were uncommon.

It has to be said that I have a bit of a soft spot for architecture.  When my apartment view for the weekend covered a step gable and a bell gable, my architecture cup overflowed.  And I came to realise the combination of practicality and decoration that the gables show is another clue to the nature of Belgians. 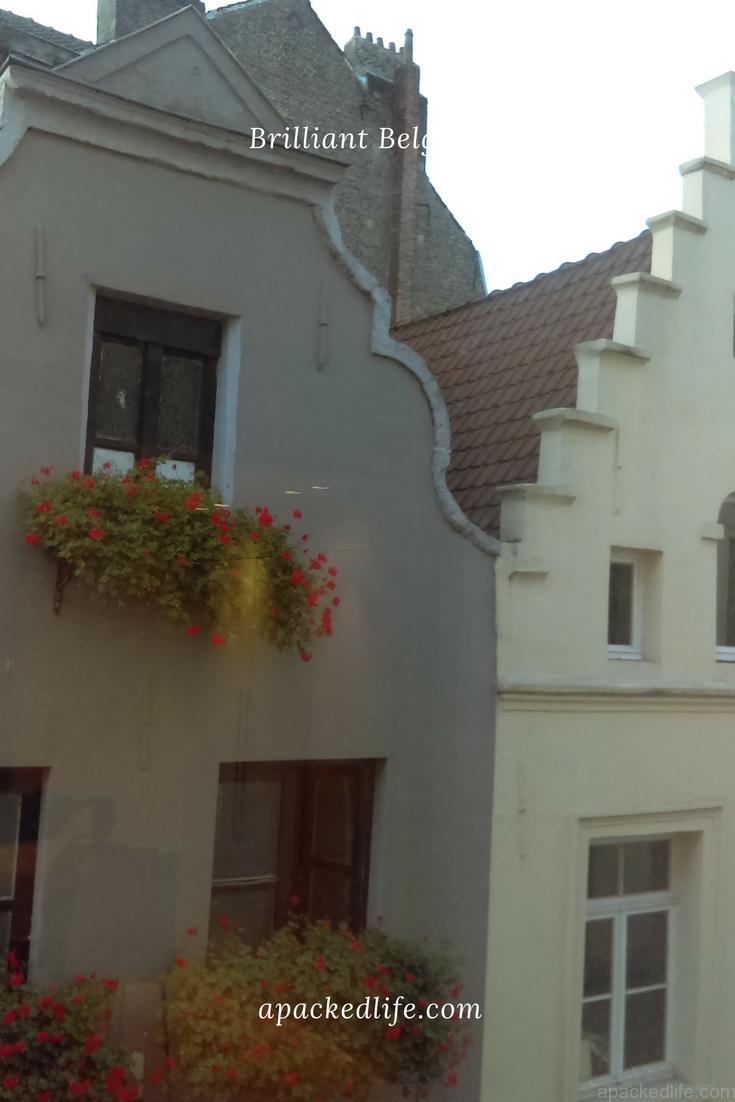 Bell to the left, step to the right.  And those window boxes: typically Belgian too.  There’s a lot of cultivated greenery everywhere in Belgium.

Brussels Clue #5: Credit Where Credit’s Due

We’ve already discussed chocolate.  Because how could you not discuss chocolate in Belgium?  But at several points on my wanderings, I was fascinated to spot a familiar and unexpected sight.  British brand Whittard, famed for tea, coffee and hot chocolate, seems to have taken over Brussels.  Now I’m a great fan of Whittard and even more so as some of their hot chocolate comes without milk, making it my go-to guilty pleasure.  But in Brussels?  Home of chocolate?

From this I concluded that the Belgians are truly magnanimous about credit where credit’s due when it comes to the deliciousness that is British hot chocolate.  And I’ll expect to see queues of happy Belgians forming at Whittard branches in the UK soon… 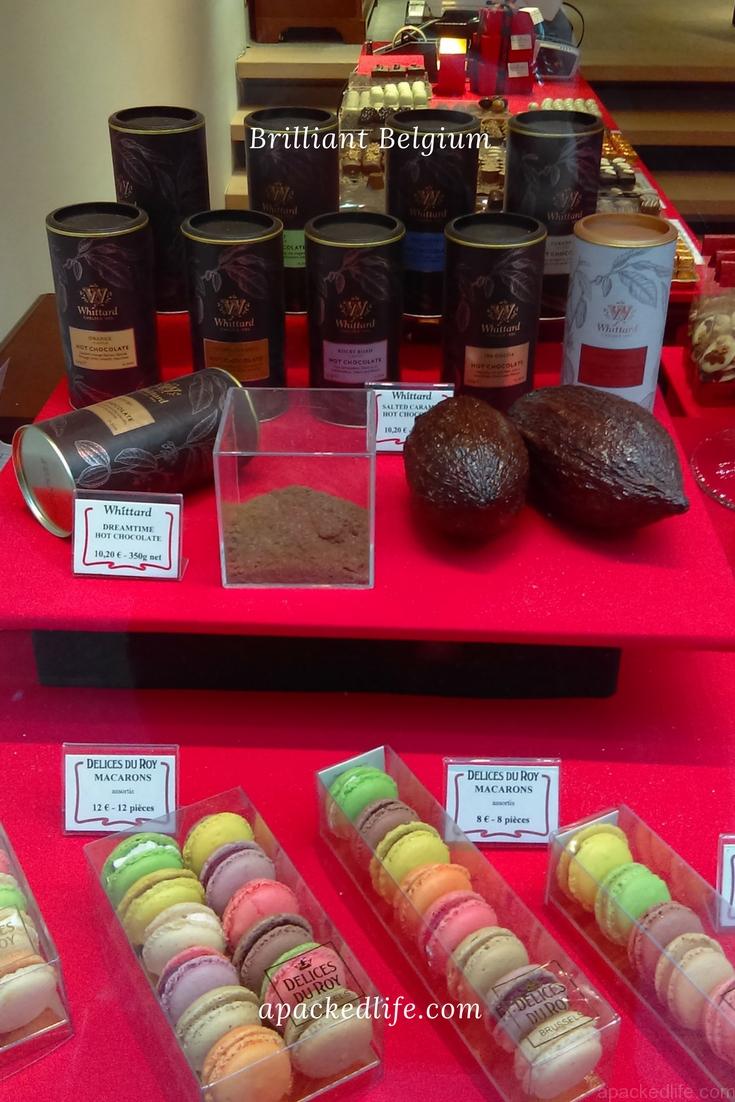 Brussels: Where the Brits brought hot chocolate to Belgium

Brussels Clue #6: History Lessons Come in the most unexpected places

Not far from the hustle and bustle that is Grand Place and its splendours, you’ll find a tiny alleyway with an overhead sign. 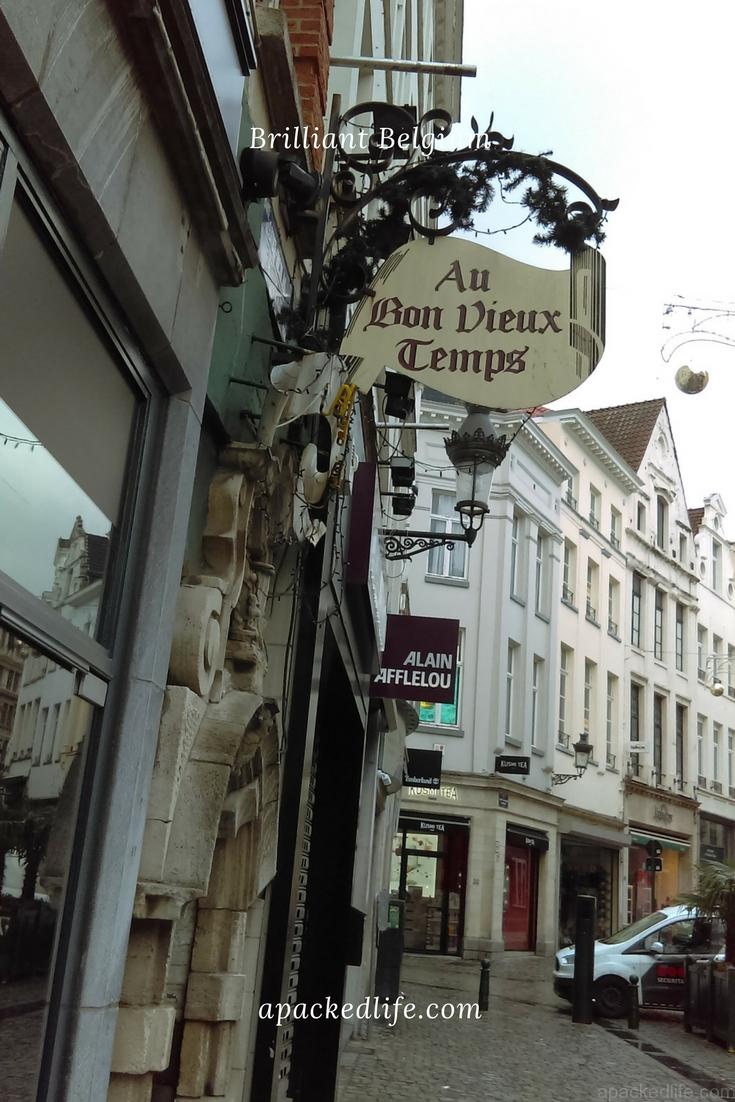 You could easily miss that, couldn’t you?  But don’t.

At Au Bon Vieux Temps, you’ll find a bar with a beer selection that will satisfy even the most ardent beer connoisseur. But for people like me who love history and architecture, you’ll find something much more fascinating. 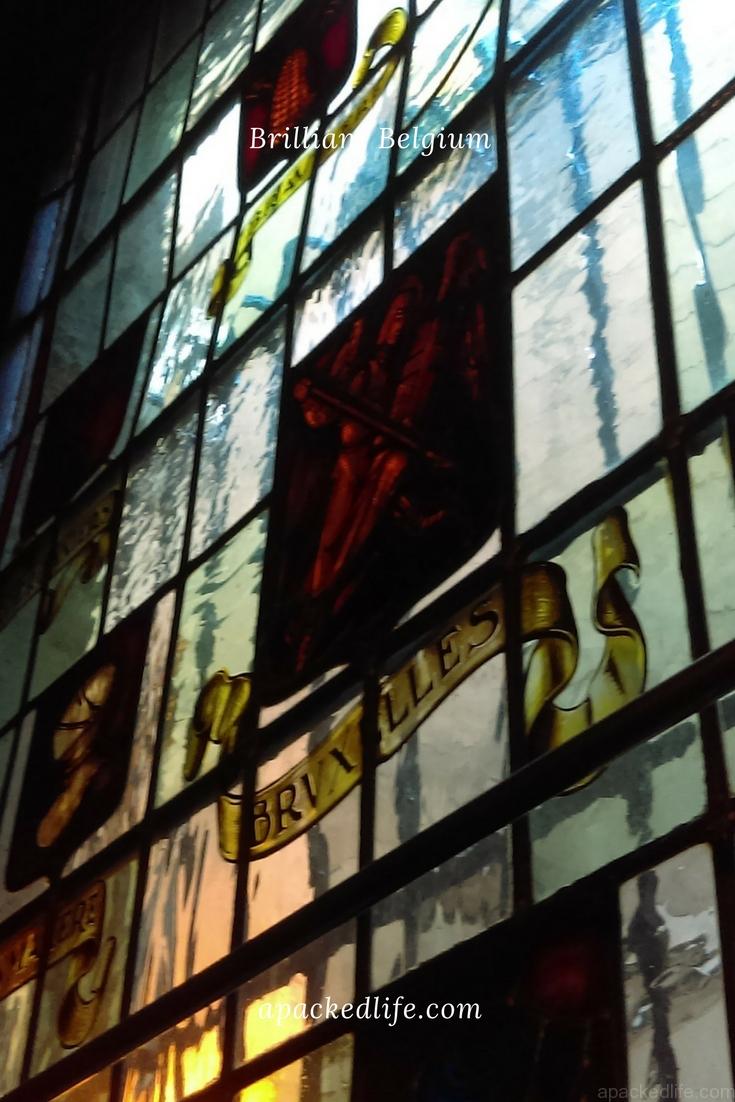 As you can see, even on a sunny day, this is a dark and atmospheric bar, so you’ll need to let your eyes acclimatise to get the full beauty of what is there.  We spent a happy half hour with the lady at the bar (it was a quiet afternoon), trying to work out what all the professions were.  We spotted farmers (wheat for beer), tanners (those gloves), brewers (of course), merchants (selling fripperies on the Rue des Frippiers) and some we struggled to identify.  It seemed clear to us that Brussels loves its heritage, but for every building in full show, as in Grand Place, there are others tucking their secrets away.

The Delights of Belgium

I hope Tintin’s detectives and their search for clues brought you a flavour of what’s beneath the surface of Brussels.  If you’ve been and seen the main sights, there’s still so much to explore about what makes Belgium so wonderfully Belgian.

For more exploration of the delights of Belgium, why not join us for a visit to Antwerp’s Kerstmarkt or a trip to glorious Ghent.  We also traveled outside the centre of Brussels to explore the art nouveau commune of Saint-Gilles.  And if train travel’s your thing, then definitely consider arriving in Brussels by Eurostar.  Or you could simply hop the coastal tram or Kusttram to see the full length of the Belgian coast from Knokke to De Panne. 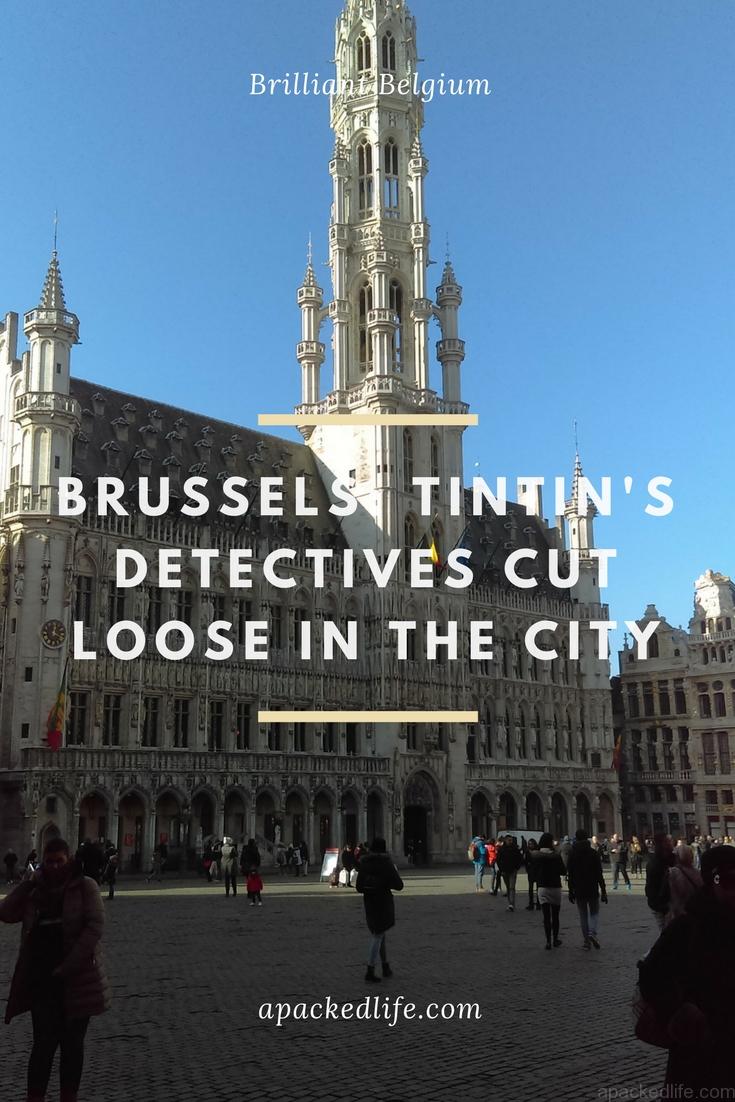 28 thoughts on “Brussels: Tintin’s Detectives Cut Loose In The City”