The Settle Carlisle train is one of the UK’s best known rail experiences.  You may have gathered by now just how much I love trains.  From the excitement that is diving beneath the waves on the Eurostar, to the glories of the overnight sleeper to the Scottish Highlands, show me a train line, and I’m happy.  So when a journey on the Settle Carlisle line was suggested as part of our Yorkshire Dales, Lancashire and Lake District trip, I was all for it.  Here’s my account of the day we caught the train, together with information about the service, timetable and fares.

Want to try the Settle Carlisle train in the future?  Then why not pin it now. 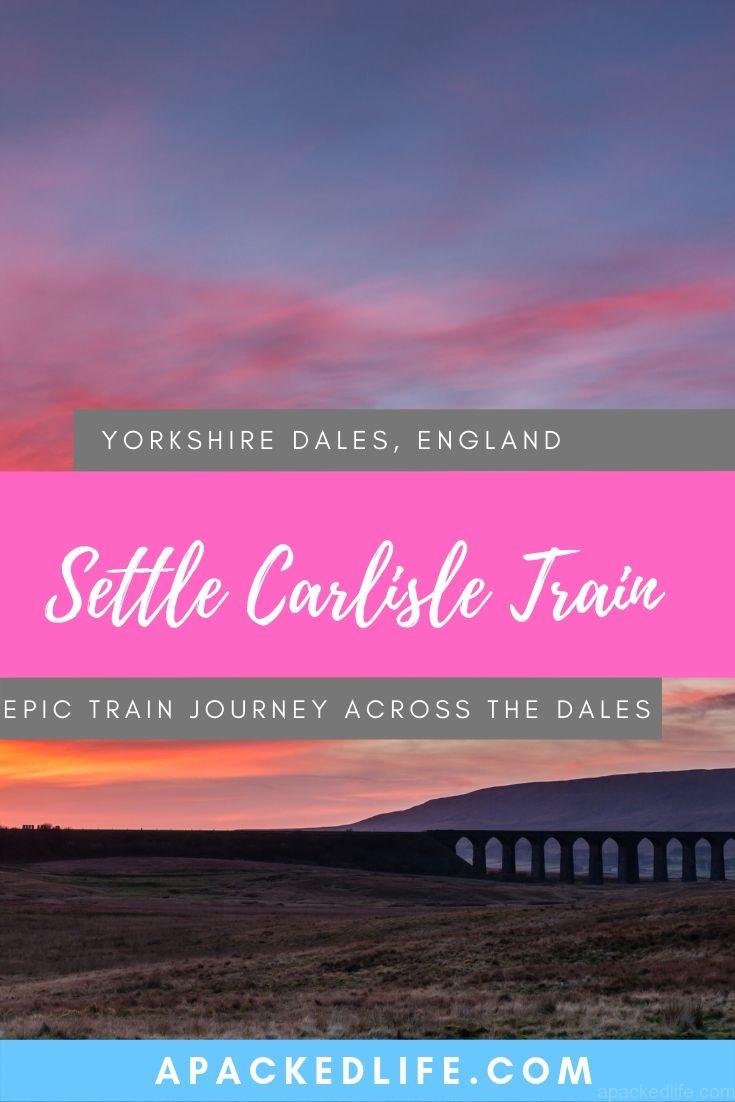 Settle to Carlisle: Not just By Steam Train

You may hear the words Settle to Carlisle, and think that this is a steam train line, but that’s not the case.  It’s a regularly scheduled service on a line that forms part of the national rail network.  The line is only 73 miles long, but the journey isn’t fast, giving you time to appreciate the glorious views, and consider all the history that surrounds your journey.

The line itself was scheduled for closure in the 1980s, but was saved by a diligent and determined collection of enthusiasts.  Now it’s more popular than ever, carrying in excess of 1.2 million passengers in 2012.  That’s impressive for such a short journey, albeit through such a majestic part of the country.  Eight formerly closed stations on the line have been reopened, and there are connections from tiny stations to enable walkers to access the fells more readily.

A Head of Steam

Part of the line was closed due to a landslip from 2016-2017.  Its reopening was marked by the first regular mainline service in 50 years to be provided by a steam locomotive.  On the day we took the train (a normal everyday train), there was a steam engine following behind us.

As a result, Settle station was packed with eager photographers.  In addition, all across the fells, we were able to spot photographers perched in prime viewpoints, mostly clad in wellies and sturdy jackets, and bearing large fishing umbrellas to protect their kit.

A challenging history for Settle Carlisle 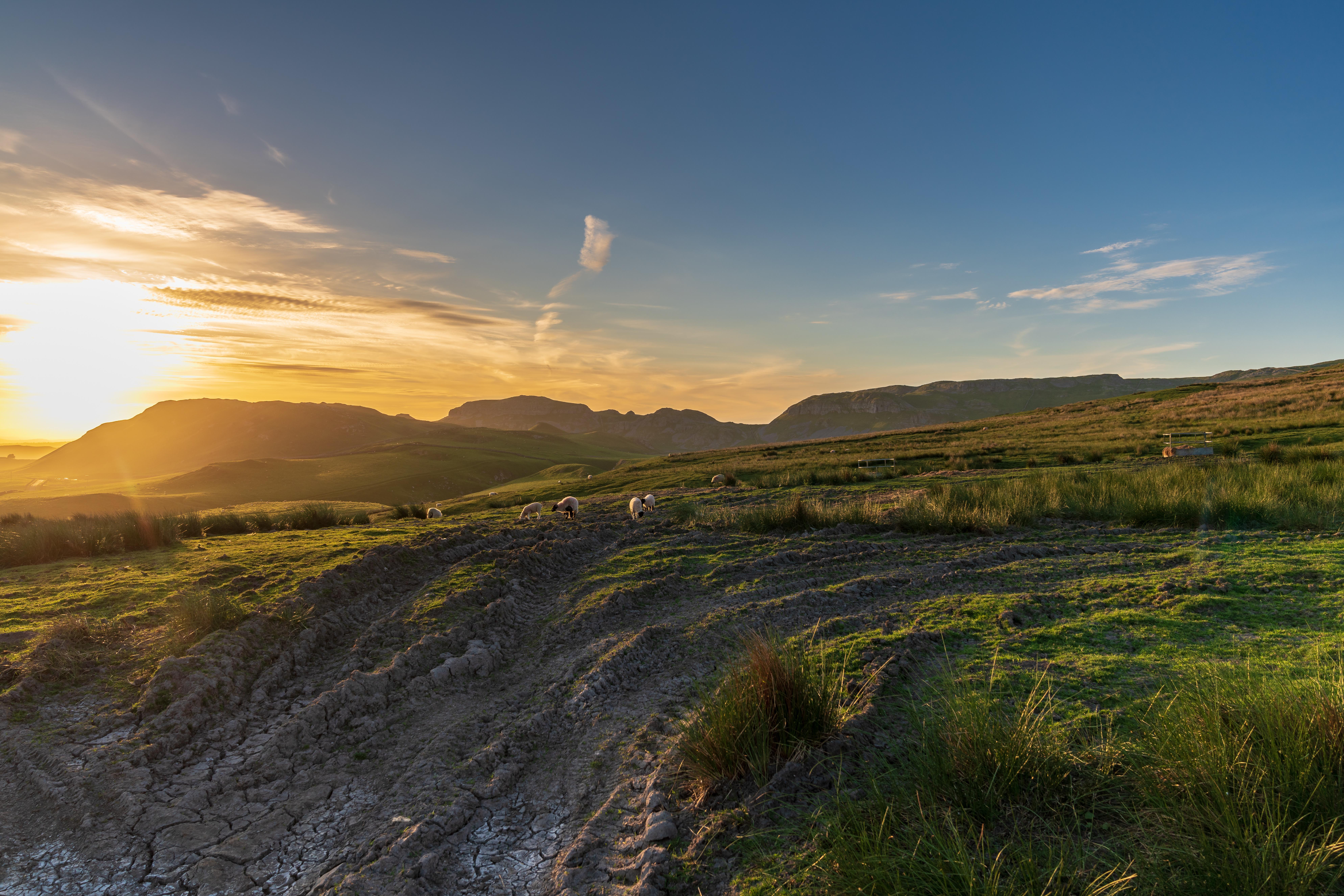 Nothing as substantial as the Settle Carlisle line gets built without the build itself creating some history.  Notable elements of the line, such as the Ribbledale Viaduct, took four years to complete in their own right.  The service emerged as a result of competition between two railway companies over access to the Scottish routes.  Originally passengers had to change trains at Ingleton viaduct, walking a steep mile in often challenging conditions to make their connections.

Eventually sense prevailed, and carriages were moved from train to train instead, albeit sometimes by being attached to slow goods trains instead of faster passenger services.   Finally permission was given for a new line, although by that stage, rising costs meant that construction started with some reluctance on the part of the investors.

The line was built by 6,000 navvies, mostly Irish, who were housed in three main camps:  Inkerman, Sebastapol and Jericho.  Towns grew up around the camps with schools and shops.  The remains of one camp can be seen near Ribblehead at Batty Green.

The death toll for building the line is significant, both as a result of the harsh conditions on the fells, and also as a consequence of a smallpox epidemic which killed 80 at Batty Green alone. 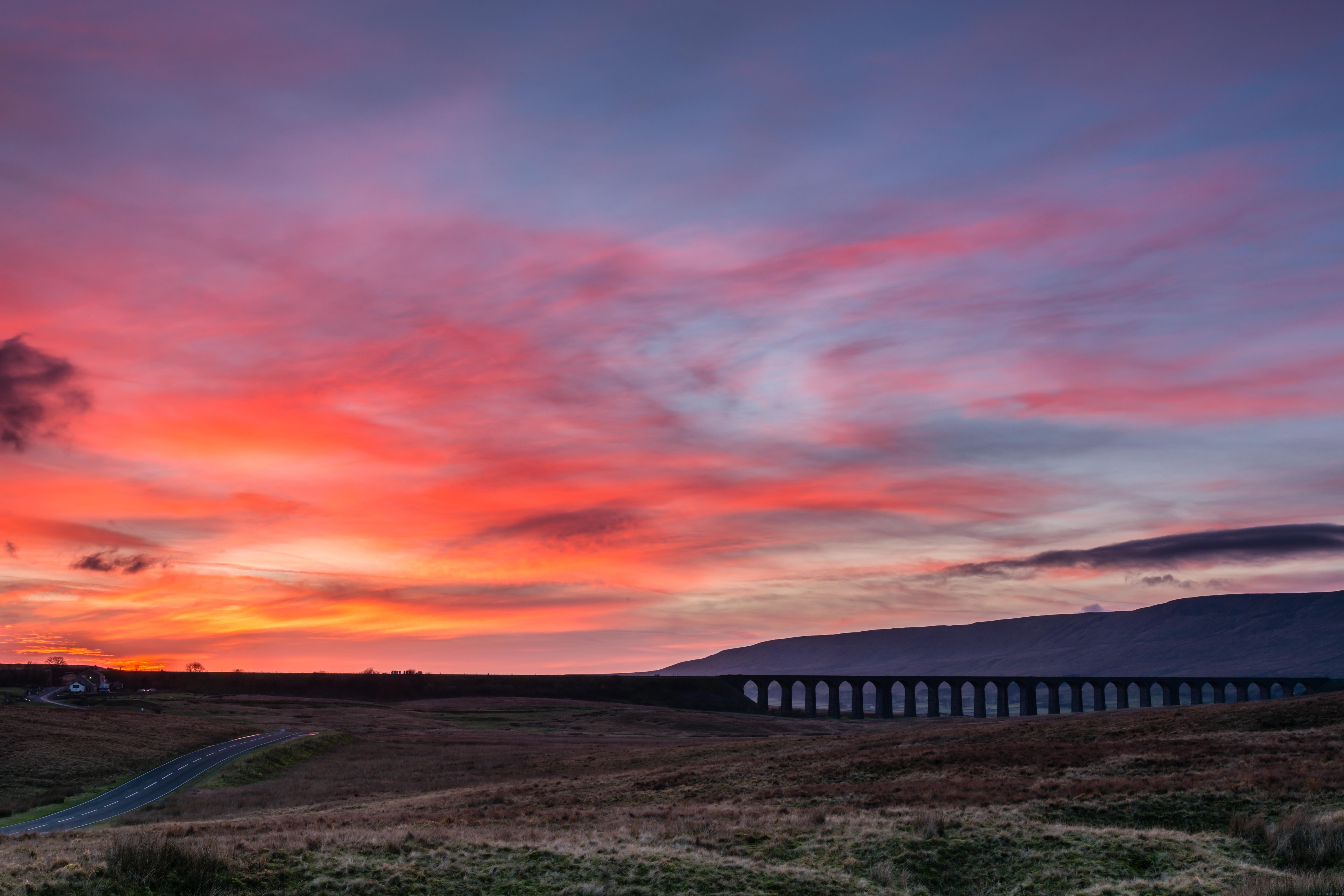 When you take the train, you get a real appreciation of the difficulties faced by the construction team.  We know that construction was halted for considerable periods due to frozen ground, snowdrifts and flooding.  Dent Head is noted, for example, to have four times the rainfall of London.  We may have seen a fair amount of it the day we took the train.

What to expect On The Settle Carlisle Train

The line was constructed to express standards, meaning that the gradients needed to be kept to less than 1 in 100, which allows fast running with steam traction.  As a result, many stations are miles from the villages that bear their names.   Even with these constraints, the journey from Settle begins with a 16 mile climb to Blea Moor, almost all of it at that magic 1 in 100 gradient.  This was known to the railwaymen as the “long drag”.

The line summits at Ais Gill, north of Garsdale.  This is the highest point reached by mainline trains in England. There are plenty of features to look out for en route.  The line has 14 tunnels and 22 viaducts.  The most notable is the Ribblehead Viaduct, which covers a 440 yard span across swampy ground.  The view from the viaduct, some 100 feet up, is incredible.  The view from below the viaduct is pretty spectacular too, and I urge you to see both if possible. 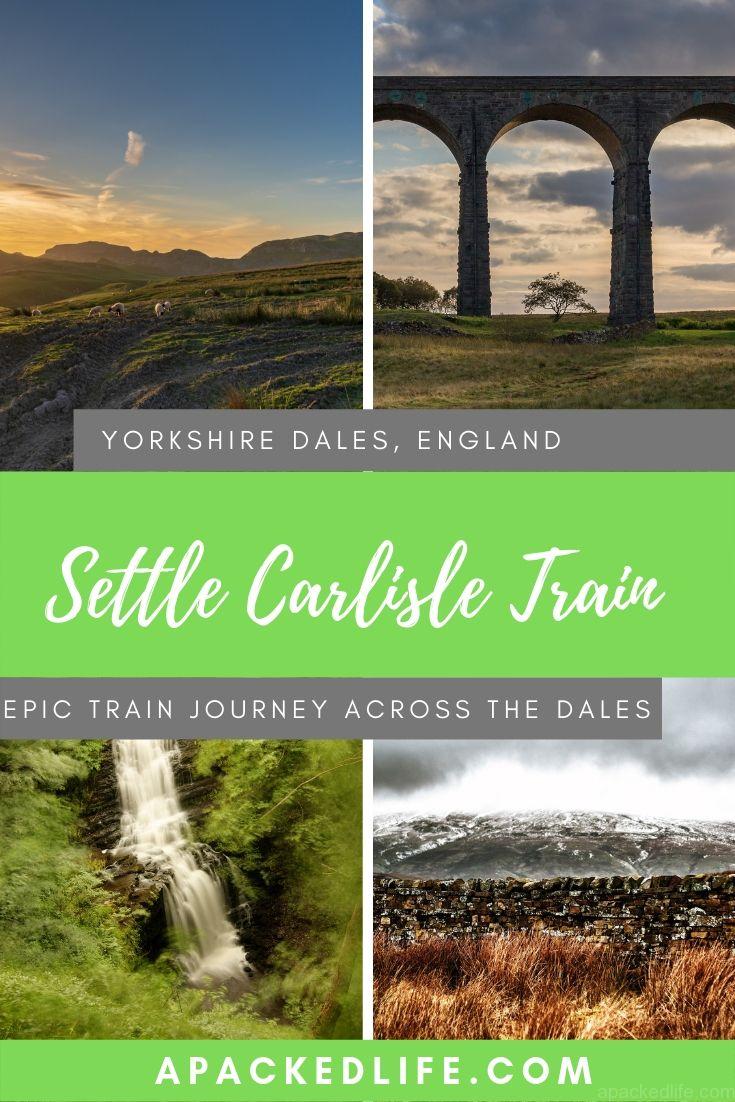 Starting out at Settle Station

It has to be said that the start of the journey is everything you might wish it to be.  Settle itself is full of interesting looking shops (all closed early on Sunday when we visited) and looks to be worth some time in its own right.  We were put into an even better mood when station parking was both plentiful and cheap, a marked contrast to our experiences elsewhere in the Dales. 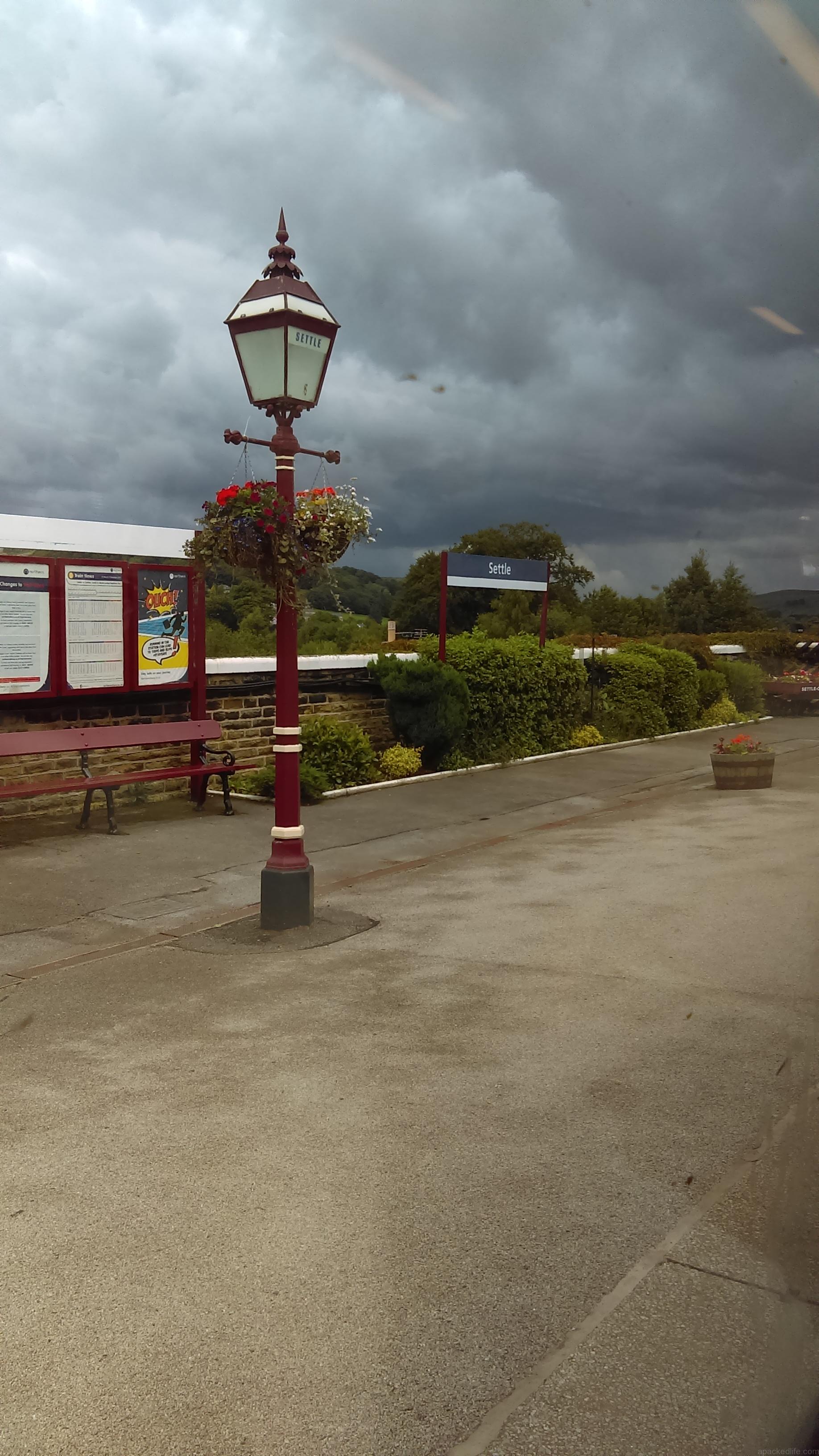 Watching the weather roll in at Settle Station.

It’s time for woman vs elements.

Then there’s Settle station itself.  It looks, frankly, like something you should have built with your dad when you were about ten.  From its pretty architecture to bed after bed of exuberant geraniums, it’s postcard perfect.  We’d been to Carnforth Station as part of our trip, as a nod to its role in Brief Encounter.  Perhaps if the protagonists had met at Settle Station, the outcome might have been happier.

So once you’ve brushed yourself down from the sheer railway perfection that is Settle station, pick up your tickets from the friendly, chatty stationmaster and cross the bridge to await your train.  You should note that if the ticket office is closed, there is a ticket machine by the station gate.  However, on the Sunday of our journey, the machine prices were significantly more expensive, so see the nice ticket man if you can.

the journey On The Settle Carlisle Train

I’d like to tell you that you’ll get the best views if you sit on the left.  Or the right.  In fact, as long as you have a window, you’re in for a spectacular time.  When the train winds its way out of Settle, you’re getting ready for that first long climb: the long drag.  At times it’s hard to believe that it’s a 1 in 100 gradient, as it feels much steeper.

We spent time spotting photographers awaiting the steam train behind us, and marveling at the arrangements they had made to protect their camera gear against the rain.  We had visited the Ribblehead viaduct from the valley below two days before, and now we found it just as spectacular from on high. 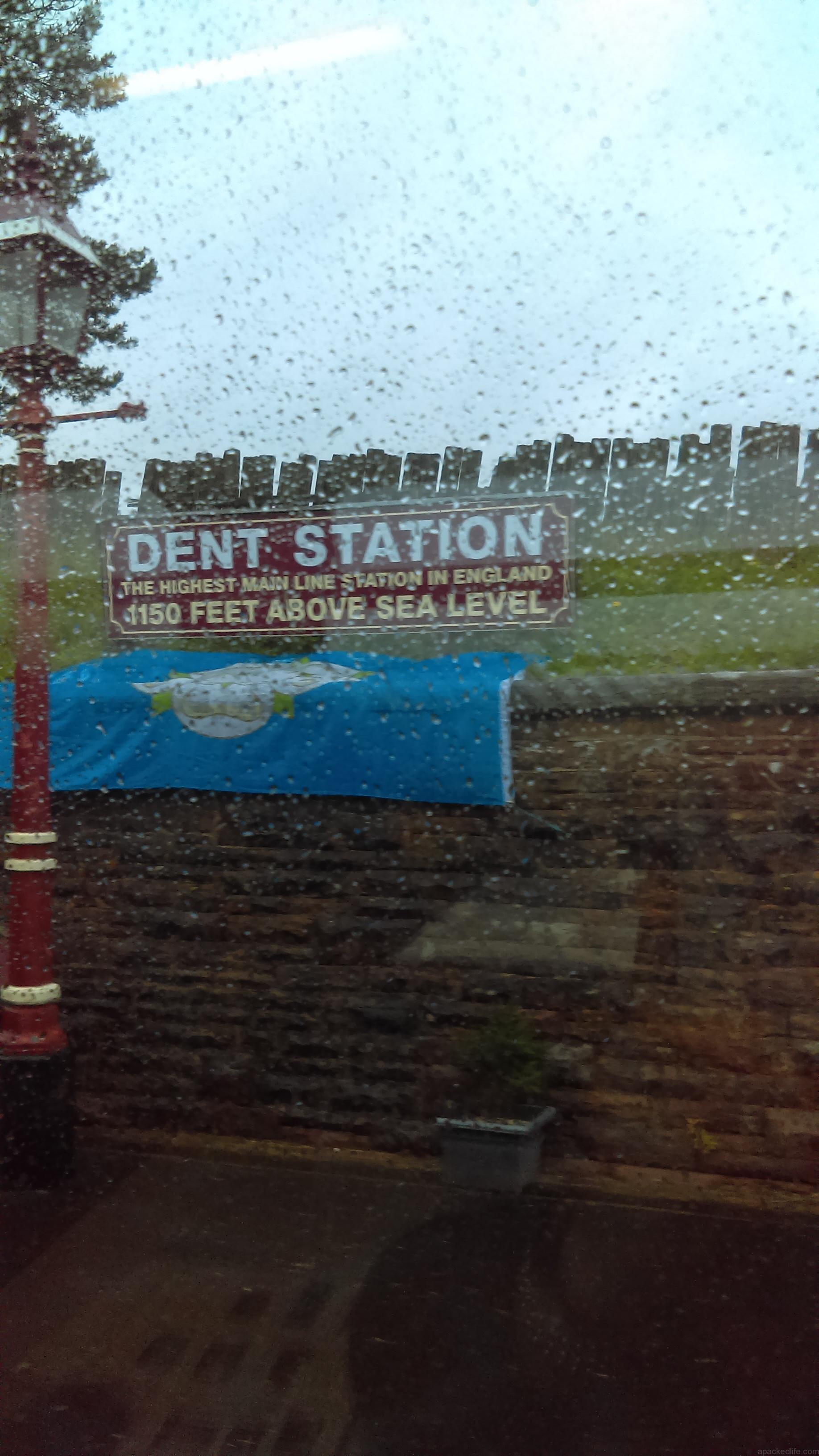 Dent Station:  The Highest Mainline Station in England.  And on the day of our journey, possibly also the wettest.

At this point we began to relax into the journey, spotting the occasional extrovert sheep, interesting forestry work, and generally being rather over excited by the beauty of it all.  Even the food and drink trolley was way better than anticipated.  Instead of being staffed by someone who would clearly rather be elsewhere, the lady navigating the narrow channel between boots and backpacks was both cheery and ultra-competent.  You imagine that if you’d slipped on a fell, she’d be more than capable of bandaging a sprained ankle, finding you a wet wipe for your muddy hands and pouring you a comforting cuppa, all at the same time.

Stories of the Settle Carlisle Train

So what more can I tell you of the journey?  Each stage had its own individual vignettes of human life.  There was the daughter, seemingly back to college or her new flat, bundled lovingly onto the train by dad at a windswept Kirkby Stephen.  There was the town of Appleby, all serene and quiet without the horse fair, but with telltale roadsigns warning of hazards from horse and carts.  Then there was the man returning to London from a tiny village.  I wondered if he was a weekly commuter, and how he managed the contrast that would work its way into his consciousness as he moved from fell to frantic in a few leisurely hours.

Alongside all this, we saw rain lashing the windows, sheep sheltering alongside dry stone walls, the incredible verdant valleys and swathes of trees harvested from the forests.

Side Trips To Explore The Yorkshire Dales 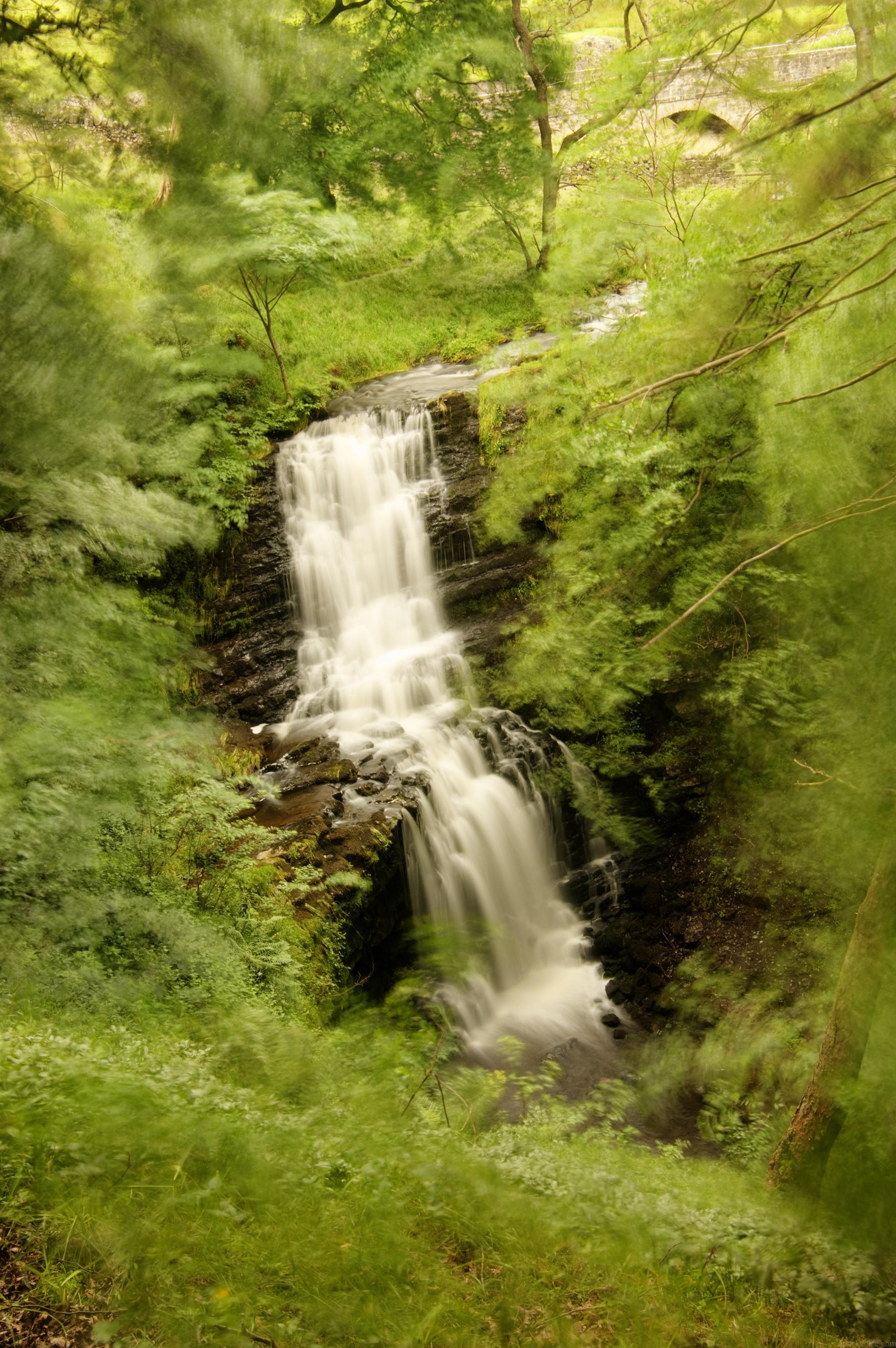 You can, of course, break your journey at any of the little villages en route.  But be aware that some of the villages are a good four miles from the train station of the same name.  You can also collect a minibus at many of the stations which will take you to any number of trail heads.  We travelled back with a party of walkers, their cheeks ruddy from the journey, and bare legs slick with rain.

What To Do In Carlisle

We had time for lunch, a trip to see Carlisle cathedral,  a visit to the visitor centre, which had plenty of information, and a stock up on supplies for the return trip.  Just as well, as the lovely trolley lady had finished her rounds for the day.

What You Need To Know About Taking The Settle Carlisle Train 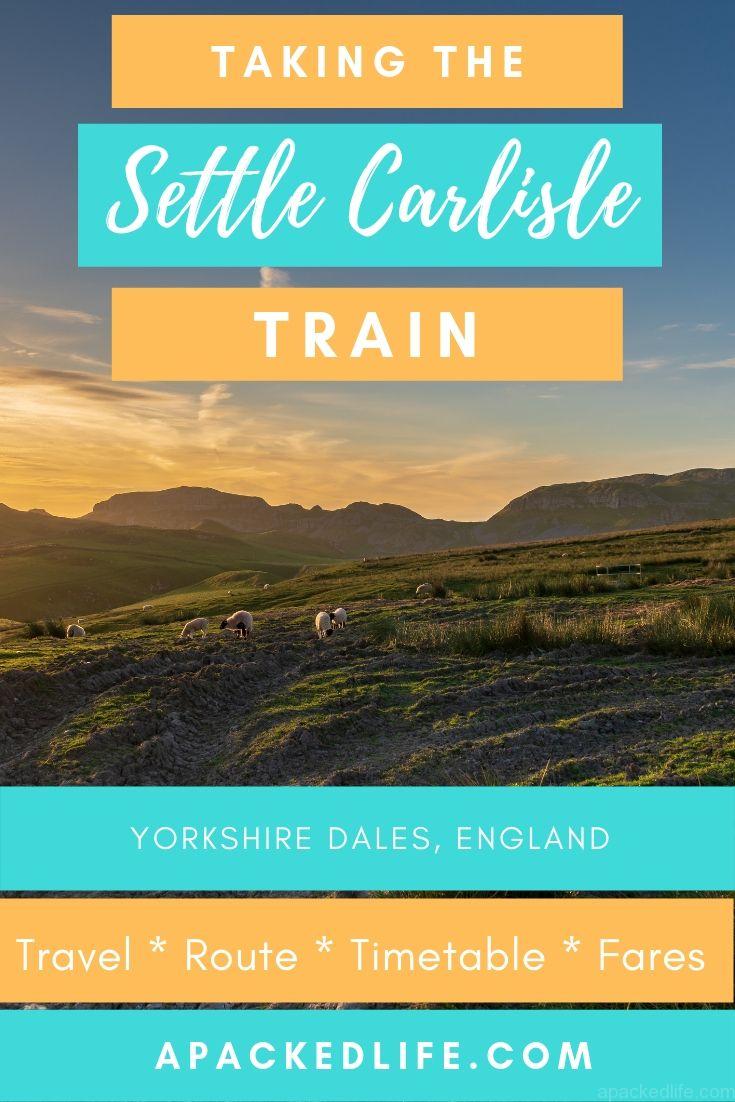 The route is 73 miles long between Settle and Carlisle.  The fastest train as at September 2019 takes 1 hour and 31 minutes.  There are 8 trains in each direction from Monday to Saturday, although not every train stops at every station.  Sunday has a slightly reduced service of 7 trains in each direction. The current timetable can be found here.

As at September 2019, the cheapest fare when booked in advance is £8.50.  An off-peak day return will cost £22.00.  Our top tip is to see if the station office is open, as we got a cheaper fare from there than would have been possible from the ticket machine.  We’ve put together a guide for more information on cheap travel in the UK.

On The Train: The Trolley Service

Most trains are served by a trolley service.  But this isn’t just an ordinary trolley.  At present, it is operated by an award-winning company offering local produce.  You can try shortbread, ginger biscuits, flapjacks and brews from the local brewery.  Depending on the mood of the Dales that day, you can also find anything from hot chocolate to ice cream, plus some souvenirs to remember your trip.

Stops at remote stations in the Dales are often met by minibus services to take you to the trailheads.  You can find out more via DalesBus, Traveline and the heritage routes at Cumbria Classic Coaches.

We’ve shared our thoughts on the best things to do in the Yorkshire Dales National Park.   If you want to go walking, we can recommend this set of self-guided walks taking you to beautiful spots in the Dales.  You could explore:

If you want to enjoy your experience even more by taking a steam train, it’s still possible.  You can’t buy your tickets from the normal station or standard online train ticketing websites.  Instead you need to go straight to the steam train operator.  You’ll find details of services and how to book here:

You can find details of the line and its services here.  There is also a stunning collection of photography, which does the scenery more justice than I could manage on the rainy day we took the train.  You can find webcams for the line via the Friends of the Settle Carlisle Line. 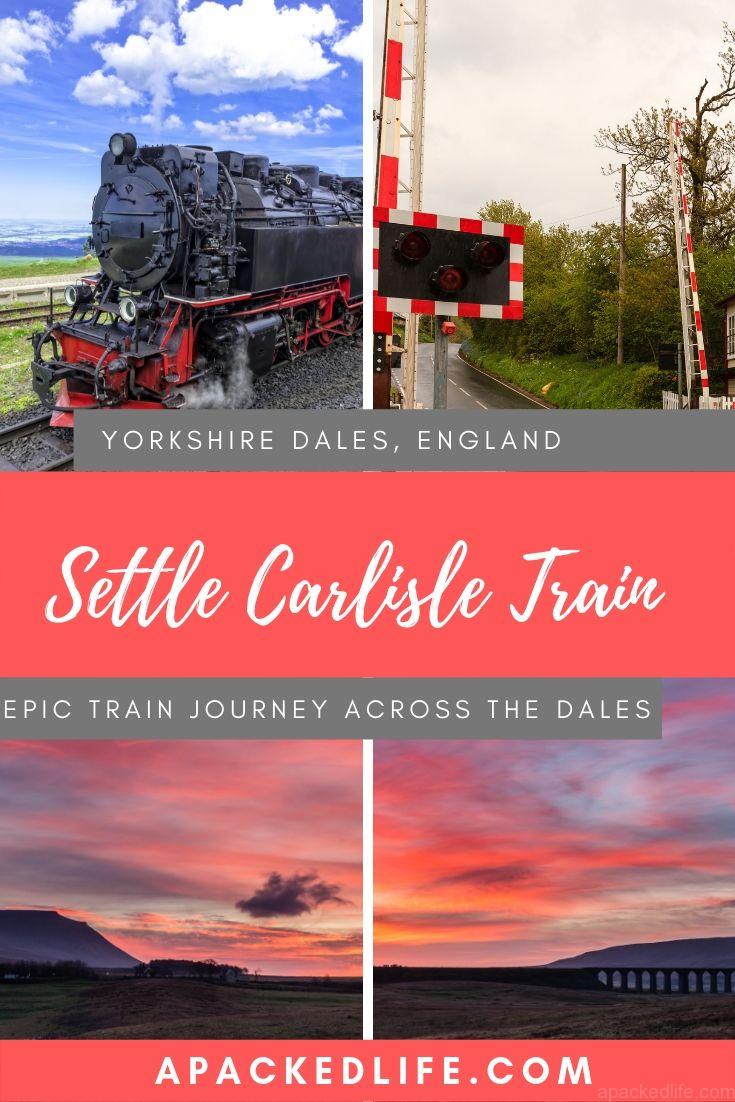 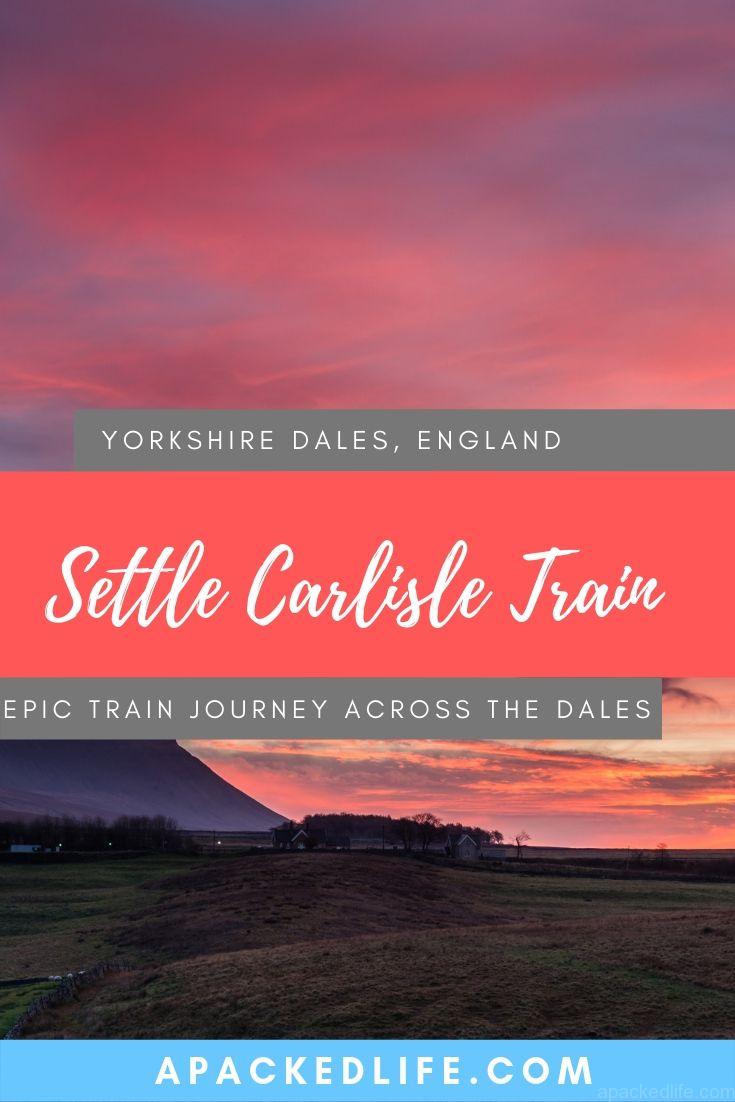 23 thoughts on “The Day We Caught The Train on the Settle Carlisle Line: Flying high in the Yorkshire Dales”