Every year in Birmingham, around about the middle of November, there’s a faint scent of ginger, mulled wine, spices and sausages in the air.  It may not always feel like crisp winter, but there’s a definite scent of seasonal cheer when the Birmingham Frankfurt Christmas Market rolls into town.  The city is partnered with Frankfurt, so for the past fifteen years, that’s been the source and inspiration for the market.  We’ve been visiting for many of those years, and we’ve recently checked out the 2018 Market to update this post.

Planning on visiting this year?  Why not pin this for later! 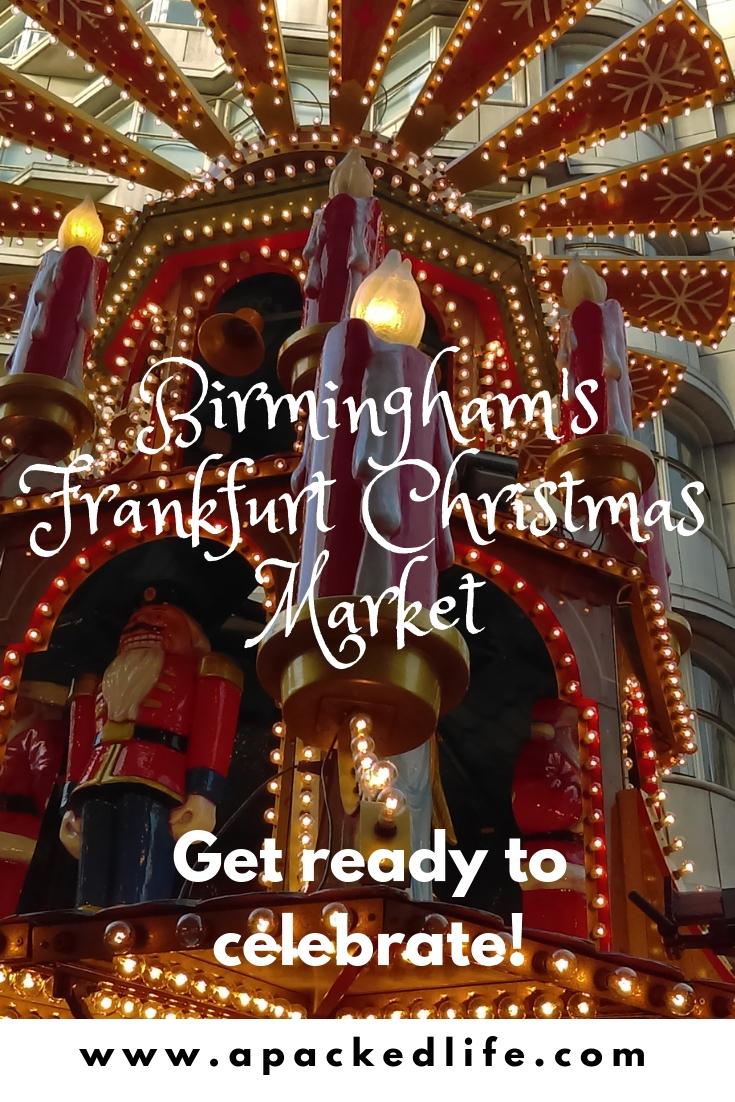 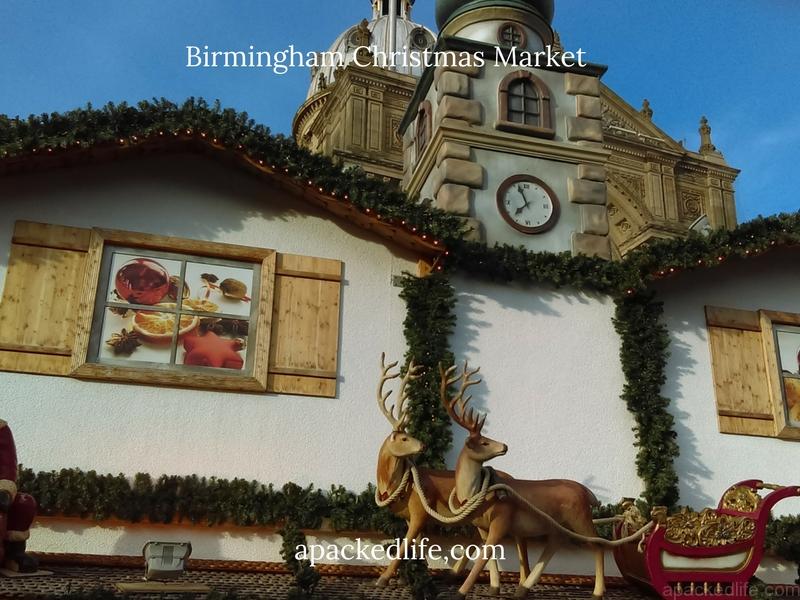 What to Expect At Birmingham’s Frankfurt Christmas Market

Last year’s market saw 5.5 million visitors.  That’s a lot of good cheer.  It’s spread through the city centre from Victoria Square at the Town Hall, down to the end of pedestrianised New Street.  Updates for 2018 include some small additions to the market scattered around the city.  For example, just outside the Mailbox, you’ll find a gathering of stalls selling everything from hot gin and Pimms to beautifully cheeky cards.  The craft market is now situated in the area surrounding the cathedral, making it an easy addition to your visit to the Frankfurt Christmas Market. 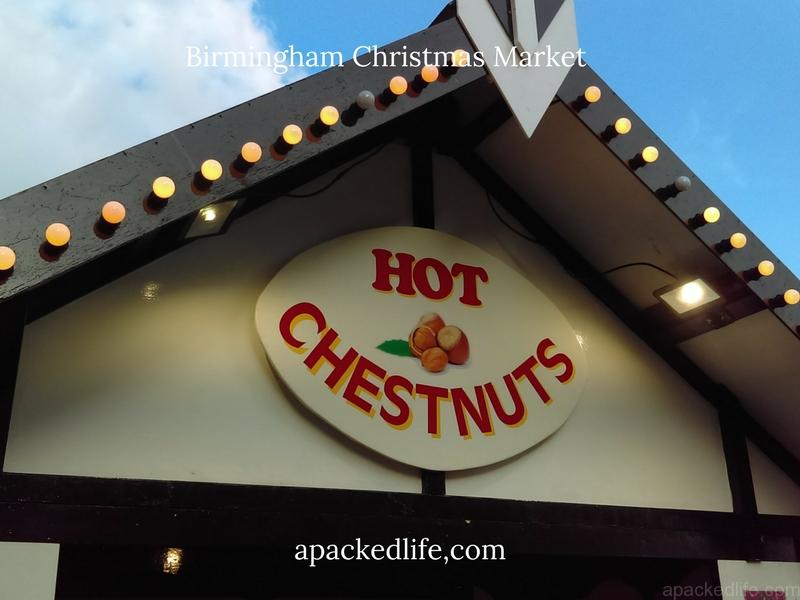 In the market itself, you’ll find a lot of stalls selling everything from traditional Christmas gifts to food and drink, toys, jewellery and decorations.  There are also plenty of food stalls selling traditional German fayre, such as pretzels, schnitzels, bratwursts, and roasted almonds.  The drinks are traditional too: glühwein, weissbeer, and hot chocolate.

Sometimes it’s the little touches that make all the difference.  Tell me if you’ve ever seen a more festive bin. 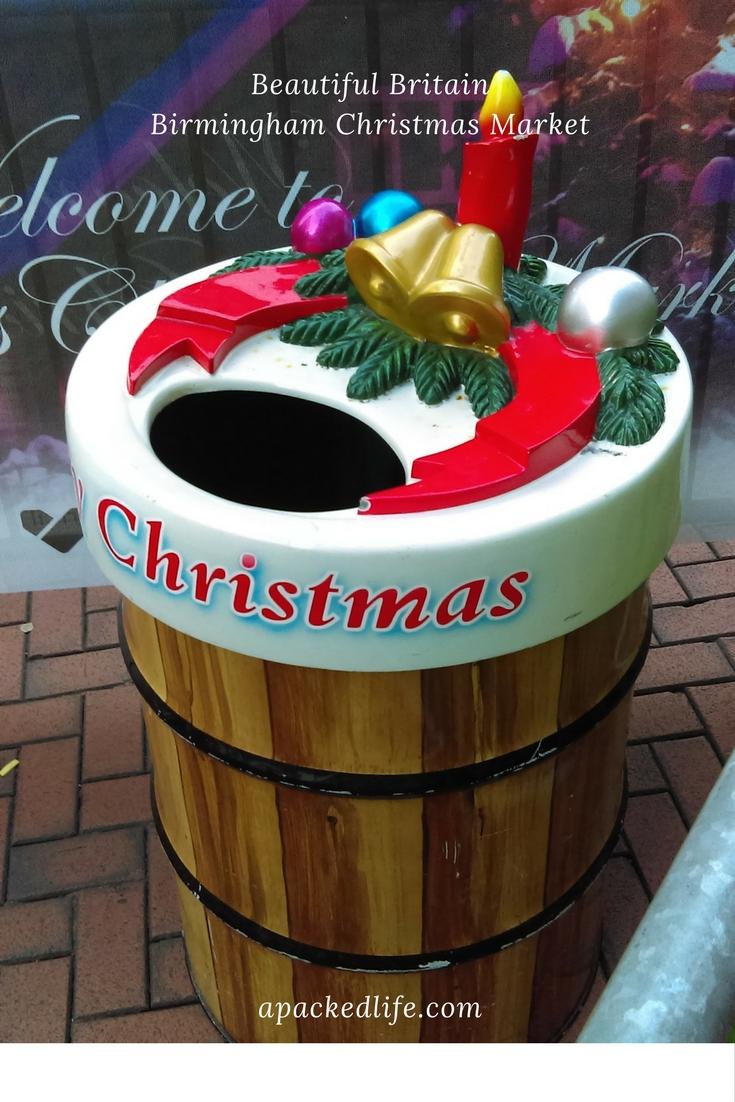 And many of us wandering around were charmed by the presence of the Snow King.   His total and pristine snowiness shows true dedication to the cause, as I imagine you’d be finding white flakes in your hair months later.  It’s how I envisage I’d look if I painted every ceiling in my house.  And indeed, he seemed to be shedding his snowiness as he walked. 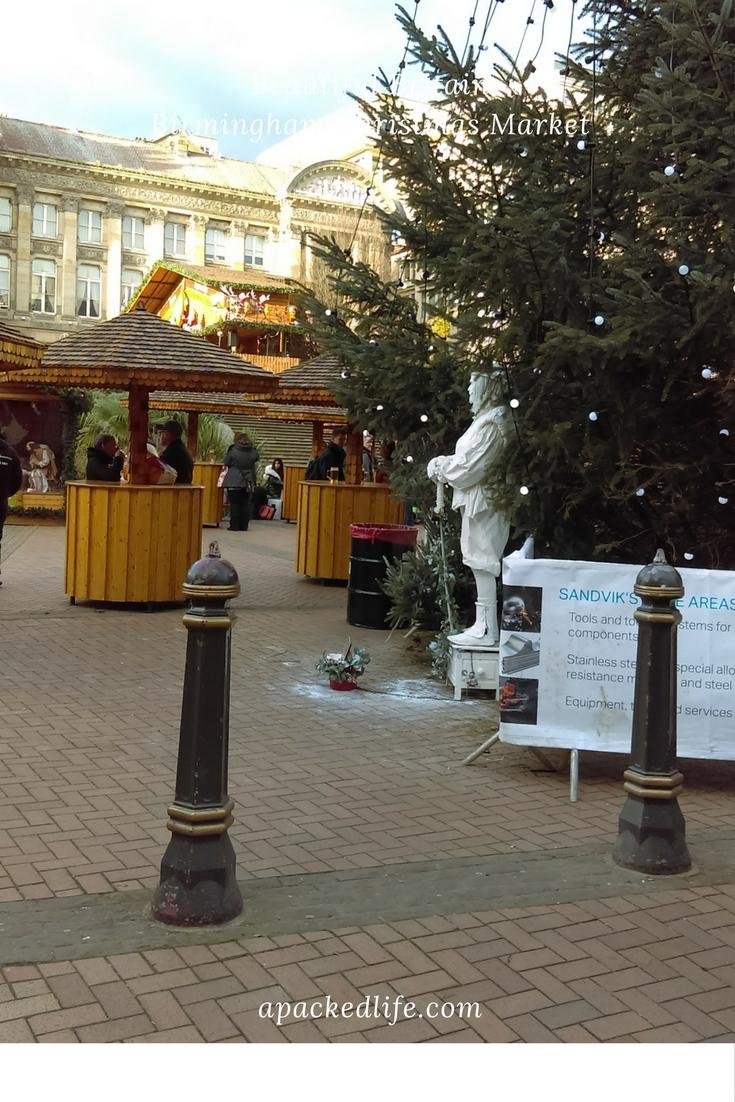 I’ll take you round the market with me in a moment, but first, let me prepare you for the experience.  There’s something spicy in the air, and it’s making you hungry.  You can smell cinnamon, cloves, maybe a little ginger.  Then there’s the unmistakable smell of sausages, and a background hint of hot chocolate.  Your ears are being teased by a mixture of sounds.  There’s a fairground noise, live music in the distance, and you can hear the chatter of excited people.  You can see lots of pretty lights, and those little chalets that are the staple of Christmas markets across Europe and further afield.  Wrap up warm, and let’s head on in.

Celebrating and Drinking: From Hot Chocolate to Weissbier 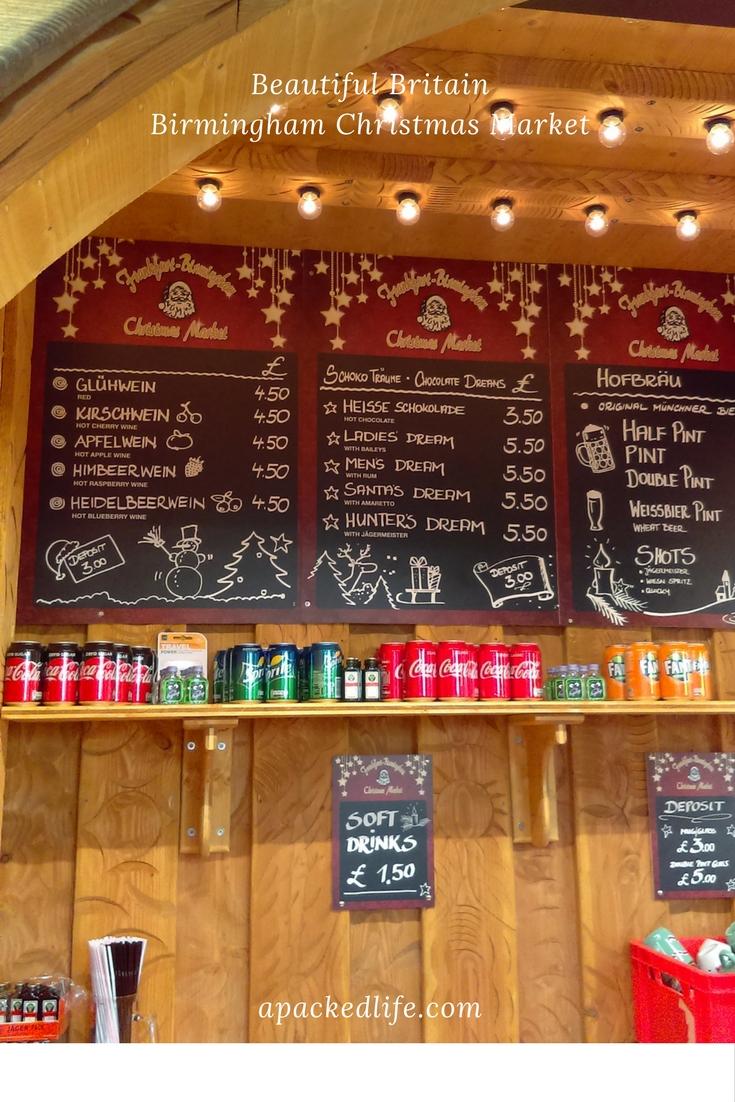 Then come what I’d like to call the hottails… Heisse Liebe (the hot love that is hot red wine with rum), Flirt (hot red wine with amaretto), Schneemann Punch (gluhwein with rum, amaretto and cream) and Scharfer Franzose (hot apple wine with Calvados). 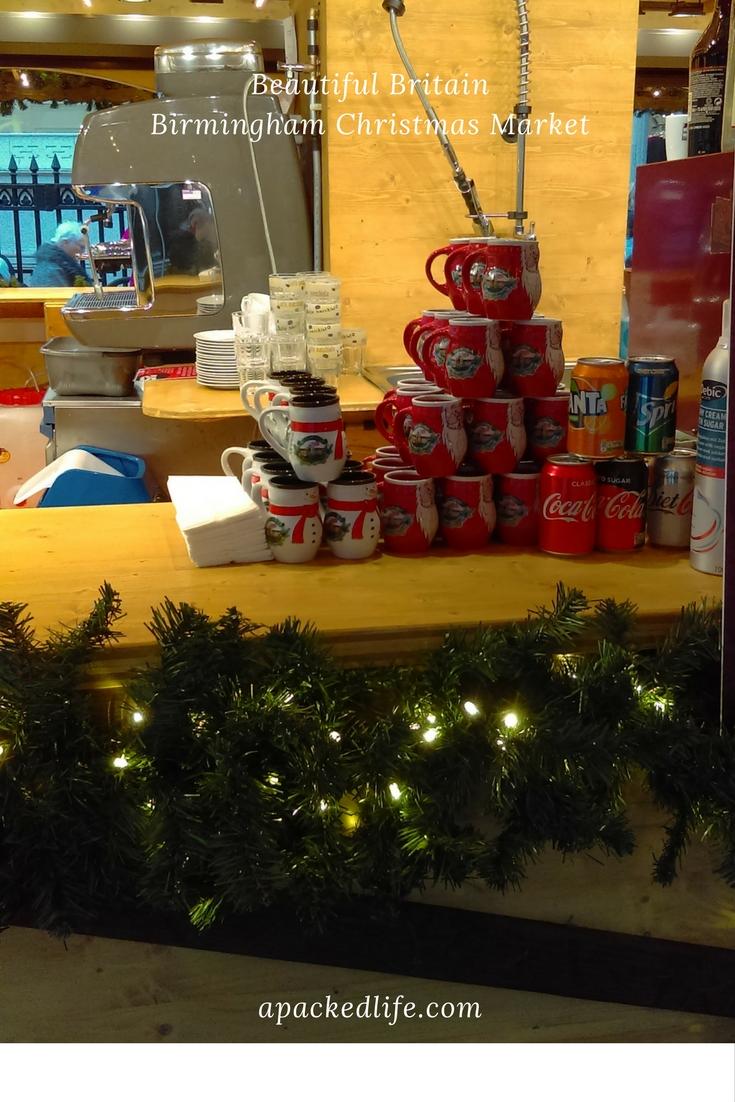 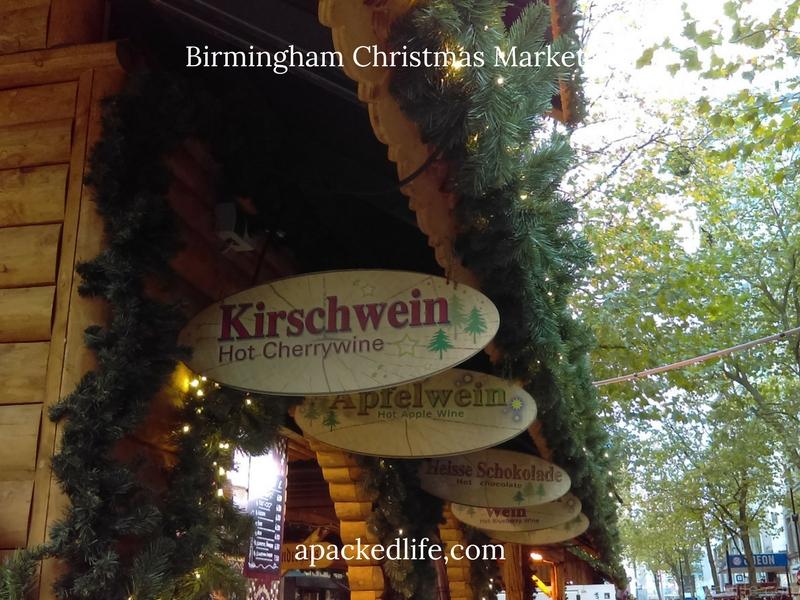 For those who like to keep it more chilled, you’ll find Hofbrau and Weissbier.  Plus, of course, a range of soft drinks.  Drinks have a deposit, which you can recover by returning the mug or glass. 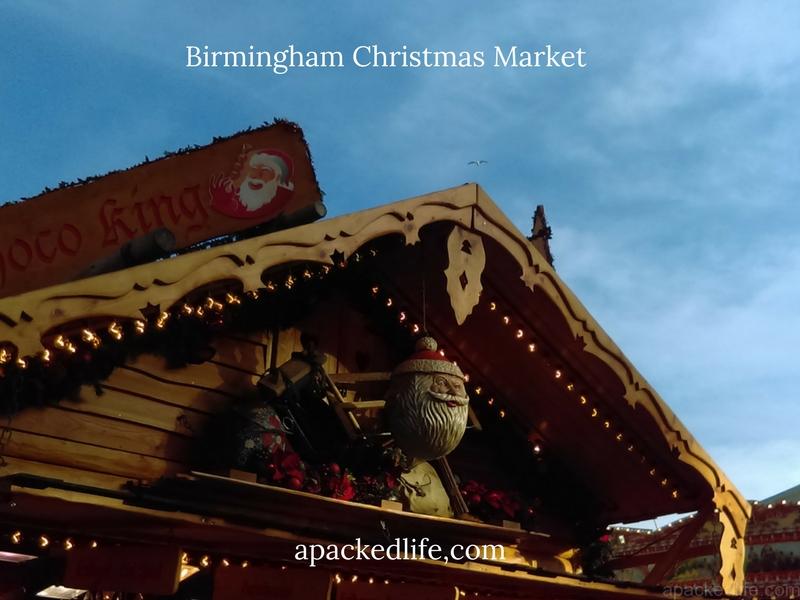 For fans of sausages, there’s an extensive selection of wurst: Bratwurst (German sausage), Krakauer (sausage with garlic), Kasewurst (sausage with cheese), Feuerwurst (sausage with spices), Currywurst (sausage in curry sauce).  And if you need something truly substantial, you can wrestle with a half metre of  Bratwurst.  I’d recommend something a little shorter when the crowds are at their height.  Half a metre of bratwurst is a bit difficult to wrangle on the busy street. 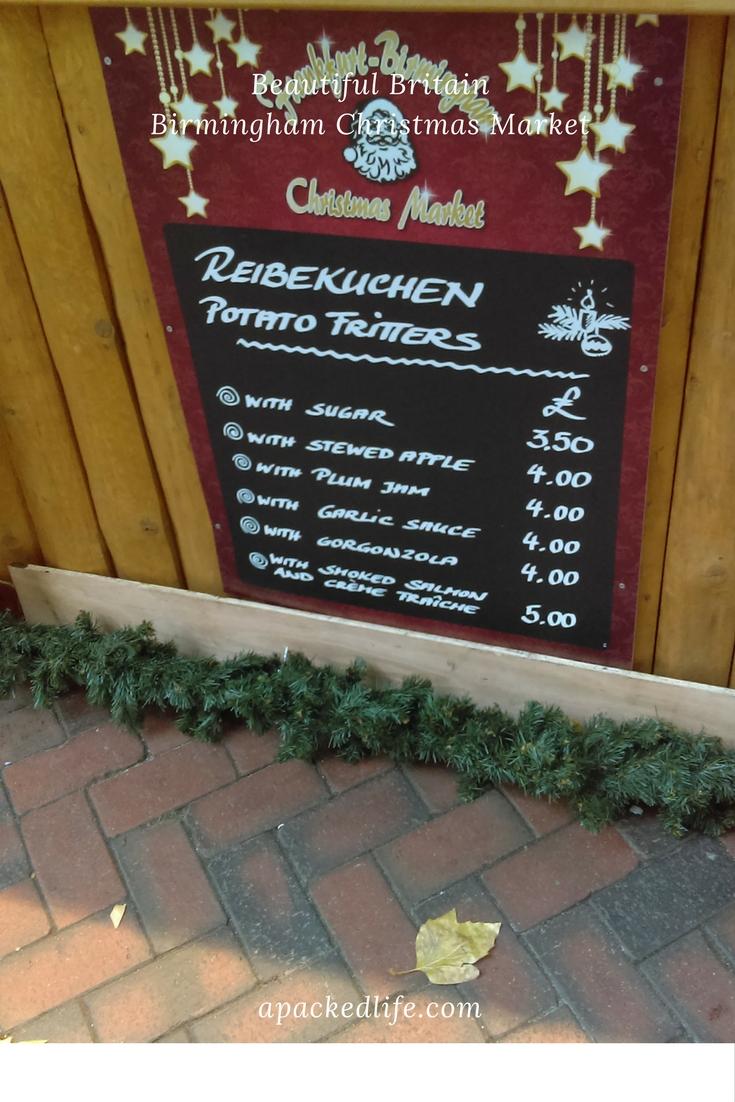 You can also find pork or chicken schnitzel, served in a roll or with chips.  You can top some chips with goulash, chicken fricassee or onions with bacon and cheese.  This is the point at which I wish I could share the smell of the market with you, although I’m sure that your imagination can work well on this. 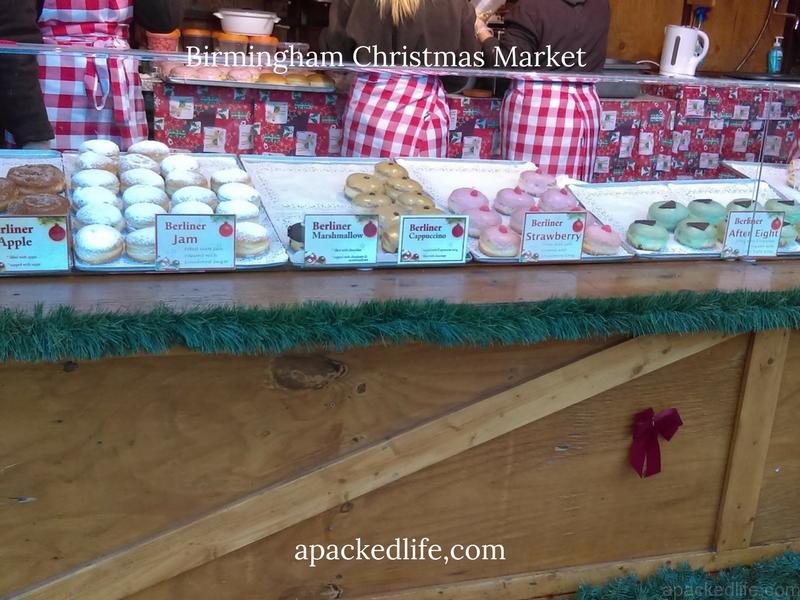 Then there are baked camemberts, red or green hot chili peppers, mozzarella sticks, cheese sticks and burgers.  You can get pots of mashed potatoes and potato pancakes with either sugar and cinnamon or apple sauce.  Don’t forget the pretzels with ham or salami.  There are Berliner doughnuts, toffee apples, and marshmallow and fruit skewers.  Followed, possibly, by a lie down. 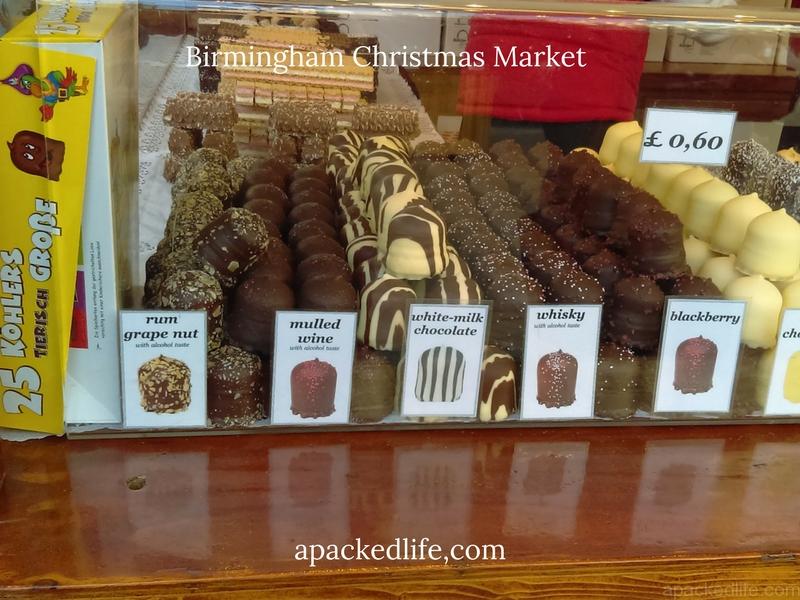 There are a whole host of gifts to be had here.  Firstly there are the food gifts.  There are flavoured coffees, chocolates, gingerbread and sweets and all kinds of treats. 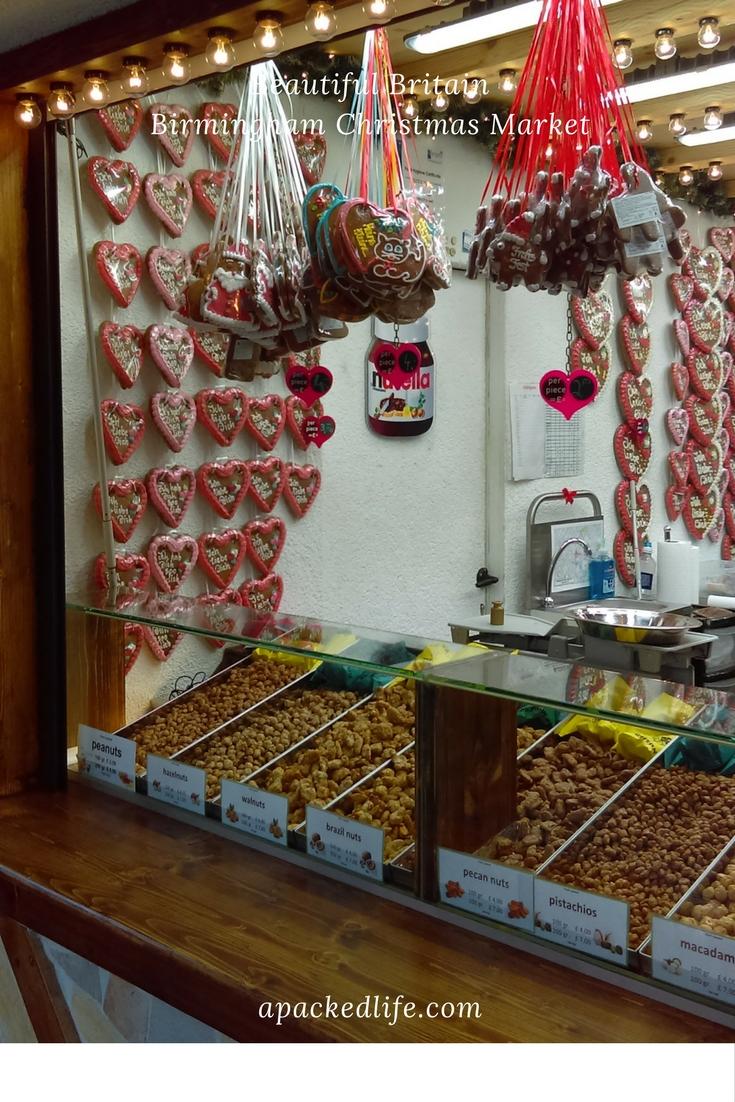 Then there are all the traditional ornaments for your Christmas home, from tree decorations to rotating wooden carousels driven by candle heat.  You can also have at least a couple of battalions of nutcracker soldiers. 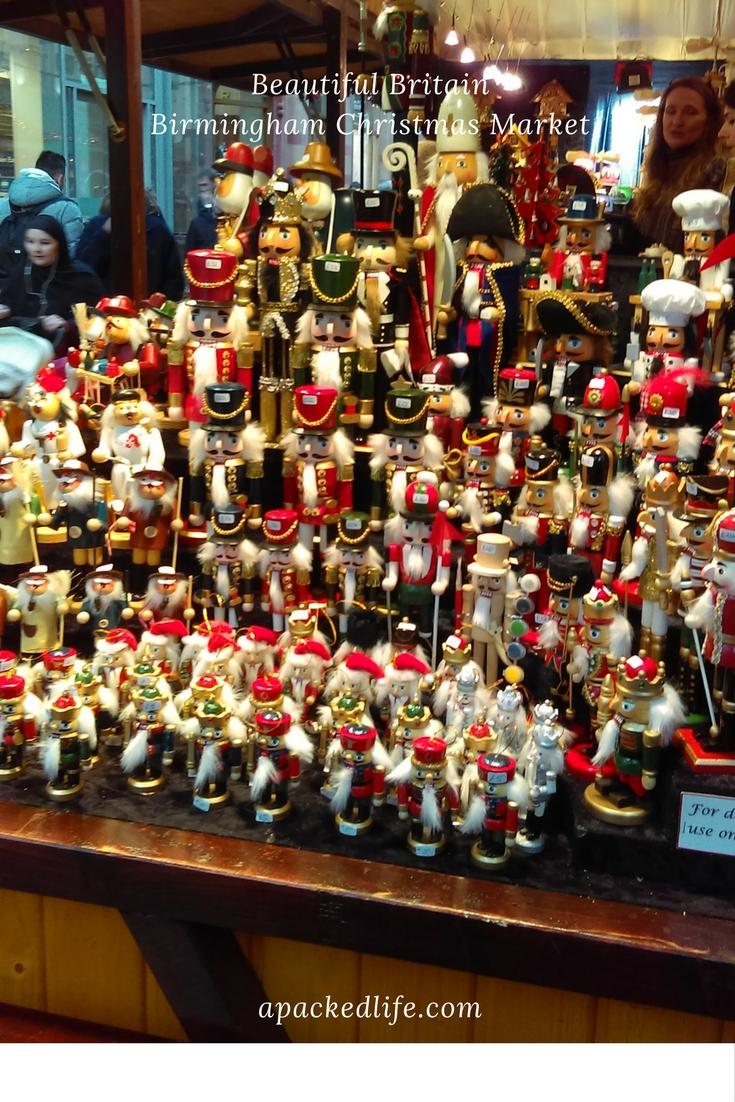 There are wooden toys and ornaments galore, crystals and windchimes, and plenty of woolly wraps, hats, scarves and gloves to keep you toasty.  And, for some unknown but rather welcome reason, a lot of guinea pigs. 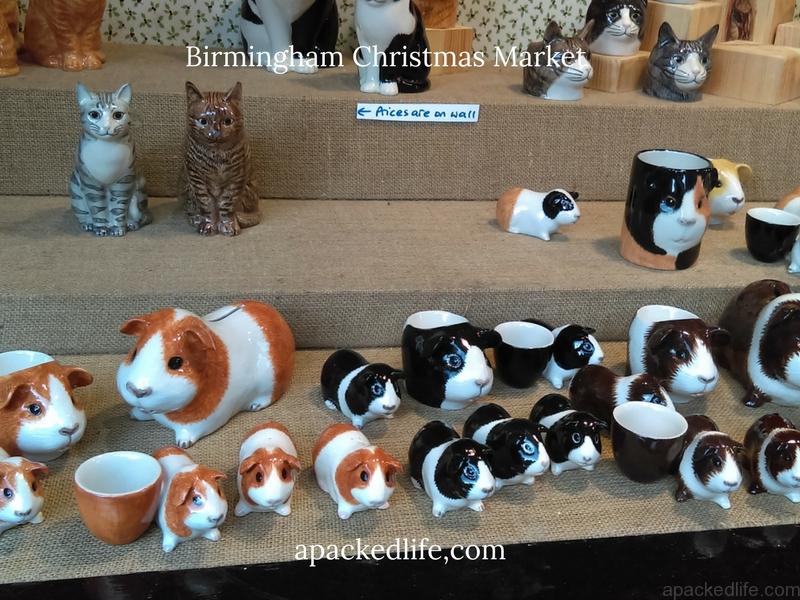 I was taken with these pretty windchimes, and it has to be said that they were very melodic. 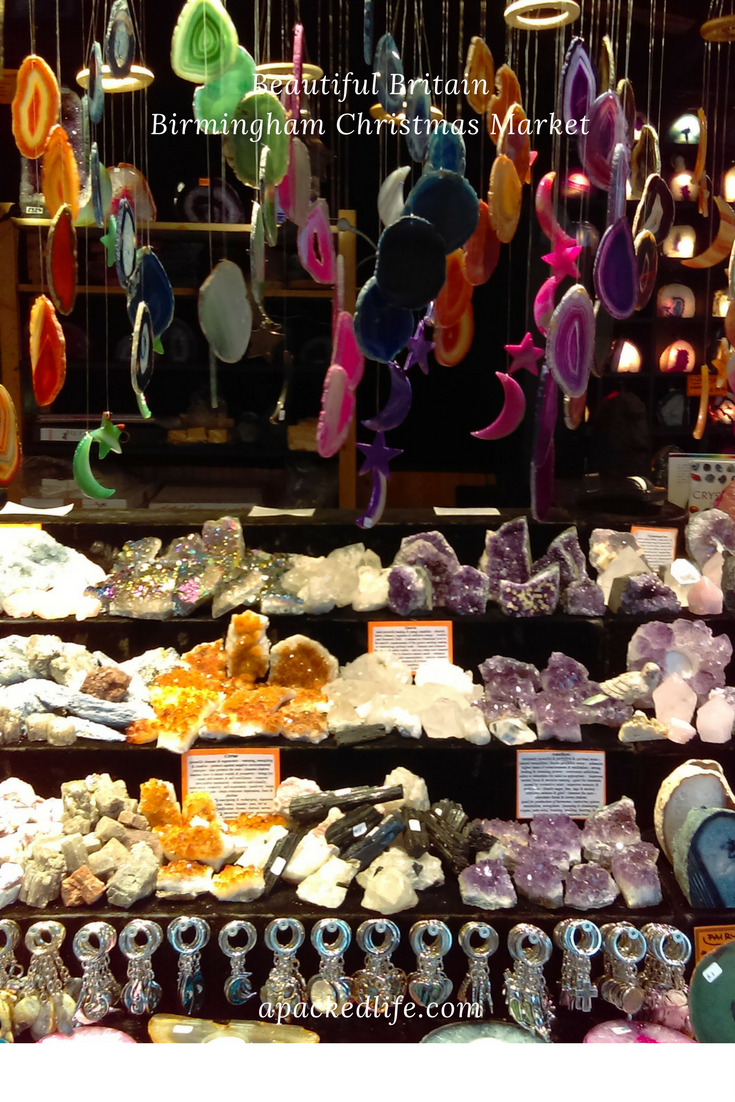 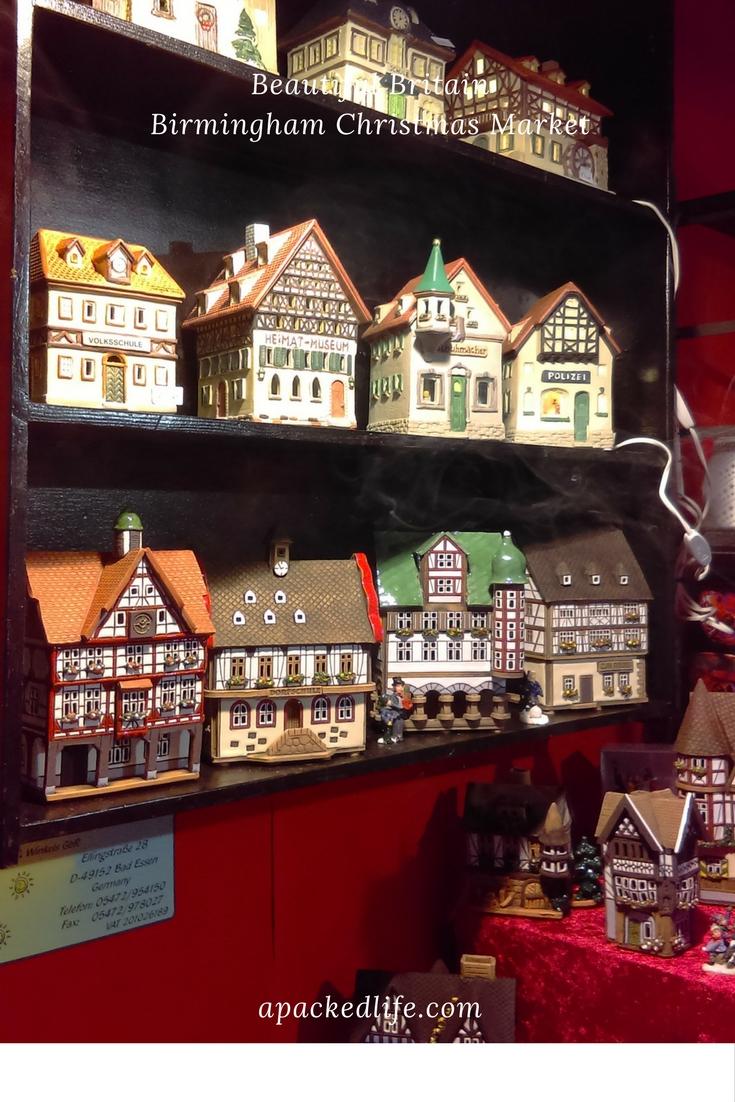 This is the largest outdoor Christmas market in the UK, and also the only German market outside Germany and Austria.  No wonder it’s popular.  Trains from London and all points of the country arrive into central Birmingham, making this a totally viable day trip from London, Bristol or Manchester.  If you’re travelling from further afield, why not make a weekend of it?

The Christmas Market opens in the middle of November and finishes just before Christmas.  In 2018, the market shuts on 23 December.  It’s within easy walking distance of the main three Birmingham stations: New Street, Moor Street and Snow Hill.  If you want to know more about Birmingham itself, we’ve taken you on a guided tour of the city here – hold onto your hats!  We’ve also explored the Birmingham’s surprising potential as a romantic destination.  Don’t forget to take the Tolkien Trail too, to understand Birmingham’s role as part of Middle Earth.  You’ll find the local guide to the Christmas Market here. 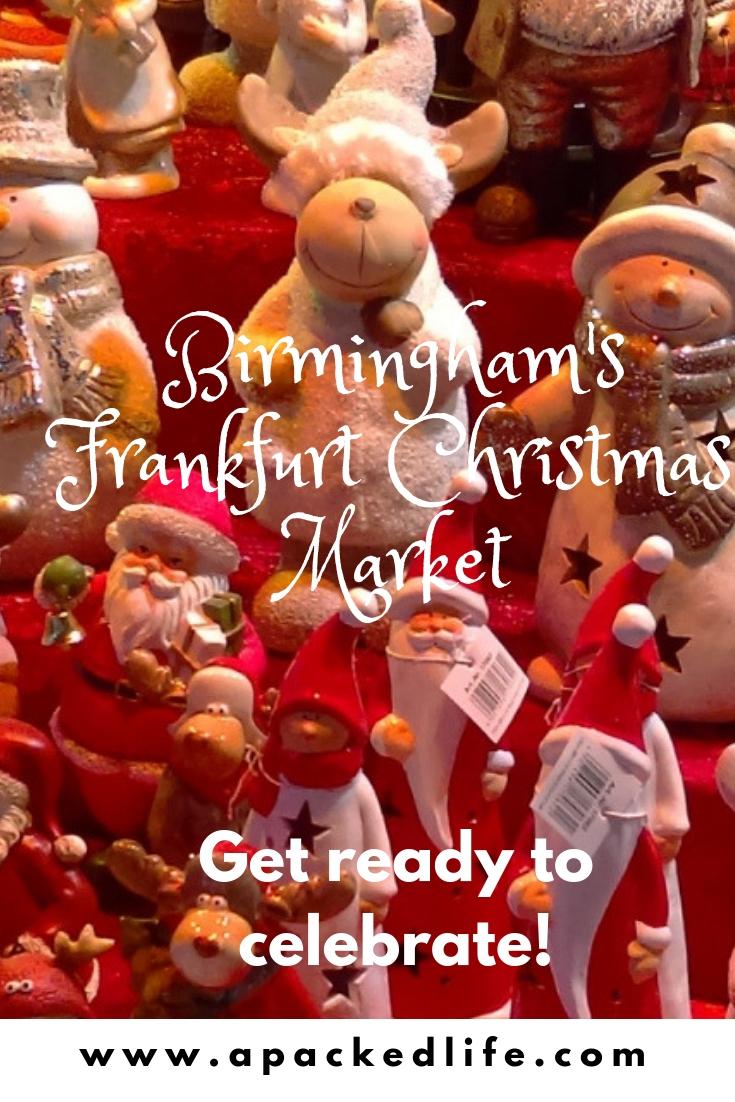 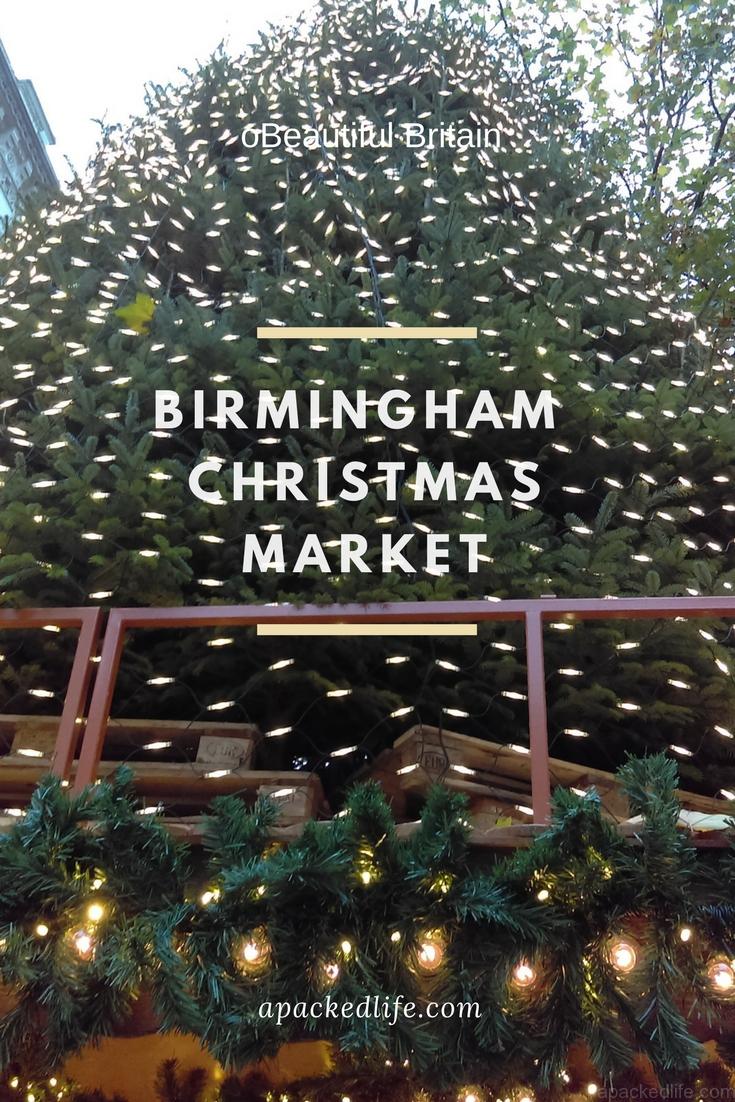