There’s something wonderful about taking a walk in the forest. That’s why I went searching for my favourite quotes about forests, trees and woodlands.

It’s not just that old adage about the importance of planting trees in whose shade you will never sit.  That magnificent investment in the future can also come to pass; here I sit under greengage and apple, and to a lesser extent the hazelnut which has grown a little more reluctantly in our garden.  I occasionally sing “I had a little nut tree” to it, just in case.

Trees hold stories.  There’s the magnificent Arden Oak, not far from us, said to mark the edge of Shakespeare’s Forest Of Arden.  There’s the deep whispering grove of Hay Wood, where we walk.  As a child, nothing fascinated me more than traveling the forested slopes of Haldon Hill in Devon, melodic with birdsong, only to pass on to the deciduous clusters of Stoke Wood.  Tolkien had his Ents, of course, and you can meet them in The Shire Country Park, one of Birmingham’s best kept secrets.

It’s no wonder trees, woods and forests have inspired so many writers and travelers.  Let’s take that path under the shady canopy.  What we might find there is a mystery, but it will surely be full of intrigue, beauty and vibrant life. 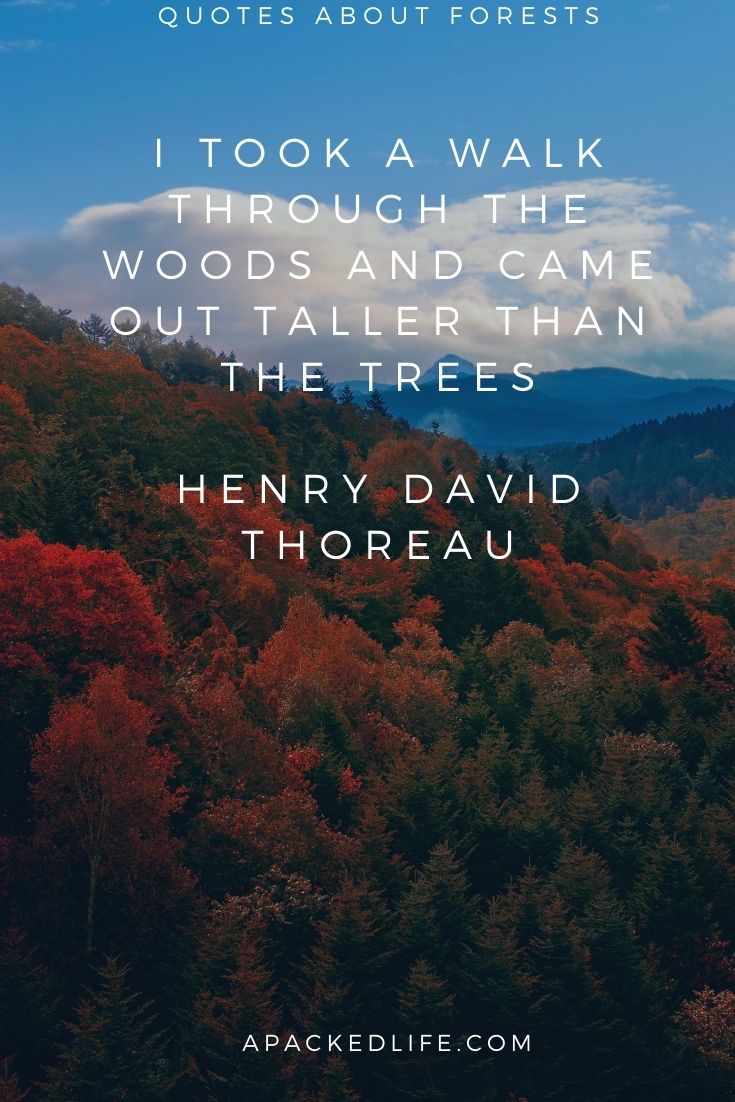 Quotes About Trees: For Nature Lovers

A few minutes ago, every tree was excited, bowing to the roaring storm, waving, swirling, tossing their branches in glorious enthusiasm like worship.  But though to the outer ear the trees were now silent, their songs never cease.  John Muir

A tree is beautiful, but what’s more, it has a right to life; like water, the sun and the stars, it is essential.  Anton Checkov

The woods were muted, no crackles of unseen squirrels or deer moving between trees. Even the birds hushed.  Sarah Jude

Going for a leisurely walk in the forest feels like getting a big ol’ hug from Mother Nature. Jamie Erwine

Among the scenes which are deeply impressed on my mind, none exceed in sublimity the primeval forests.  No one can stand in these solitudes unmoved, and not feel there is more in man than the mere breath of his body.  Charles Darwin

Chimpanzees, gorillas, orangutans have been living for hundreds of thousands of years in their forest, loving fantastic lives, never overpopulating, never destroying the forest.  Jane Goodall

To walk attentively through a forest, even a damaged one, is to be caught by the abundance of life; ancient and new, underfoot and reaching into the light.  Anna Lowenhaupt Tsing 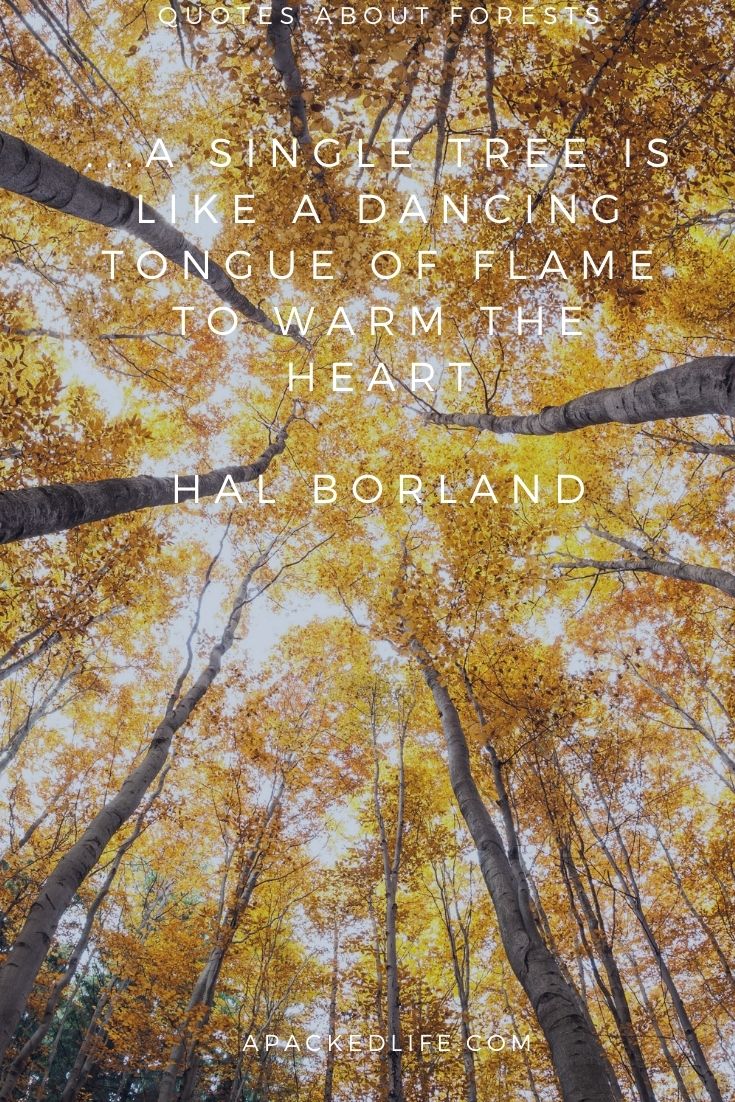 Inspired by The Forest

Who else goes to the woods to find peace, only to discover himself in the process?  Michael Poetl

Trees are poems the earth writes up in the sky.  Kahlil Gebran

There is no repose like that of all the green deep woods.  Sleep in forgetfulness of all ills.  John Muir

Forests are places where we can get back in touch with our inner selves, where we can walk on soft ground, breathe in natural scents, taste berries, listen to the leaves crackling – all the senses are awakened in the subdued light and stress melts away like snow in the sun. Pierre Lieutaghi

The heart of another is a dark forest. Gloria Vanderbilt

It’s not so much for its beauty that the forest makes a claim upon men’s hearts, as for that subtle something, that quality of air that emanates from old trees, that so wonderfully charges and renews a weary spirit. Robert Louis Stevenson

My favourite places on earth are the wild waterways where the forest opens its arms and a silver curve of river folds the traveller into its embrace.  Rory MacLean

Dark is the forest and deep, and overhead

In vain, though not since they were sown was bred

It was the forest’s fault.  Those two handsome woodcutters.  An evil place, the forest, everyone knows, full of temptations and imps.  Tanith Lee 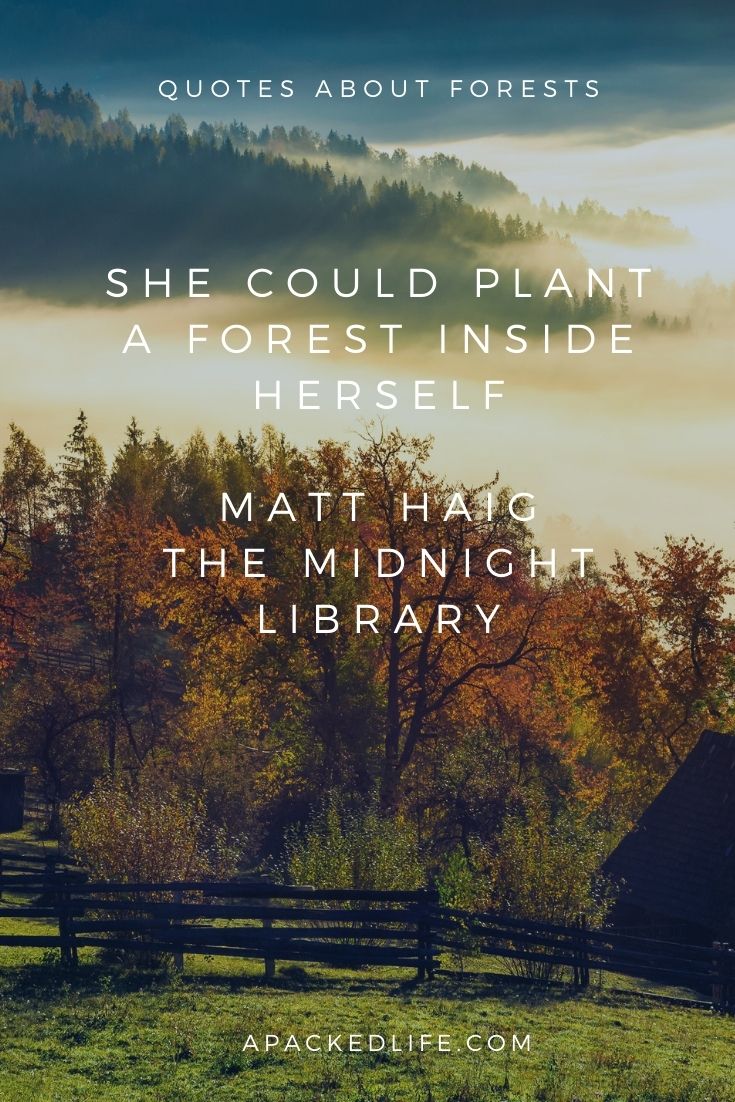 Quotes About Forests: What Stirs Within

There was once and old castle, that stood in the middle of a deep gloomy wood, and in the castle lived an old fairy.  Jacob and Willhelm Grimm

The clearest way into the Universe is through a forest wilderness.  John Muir

Deep in the forest

The witches are dancing

I love the forest.  It is a place where you go to hear yourself better. Fahadh Faasil

Forests are like churches, hallowed places.  There’s a stillness about them, a source of reverence.  Sabrina Elkins

The woods are where silence has come to lick its wounds. Samantha Hunt

Woods are not like other spaces.  They make you feel small…like a child lost in a crowd of strange legs.  Stand in a desert or prairie and you know you’re in a big space.  Stand in a wood and you only sense it.  They’re a vast featureless nowhere.  And they are alive.  Bill Bryson

Being in the woods at night is a beautiful thing.  Hugo Weaving

The world is dark and quiet, except for the soft rustling of leaves and the cry of a wolf in the distance.  Jen Calonila

I have lived knowing nothing of the forest, so there is nothing I can teach you.  Go into the wild.  Mamoru Hosodo 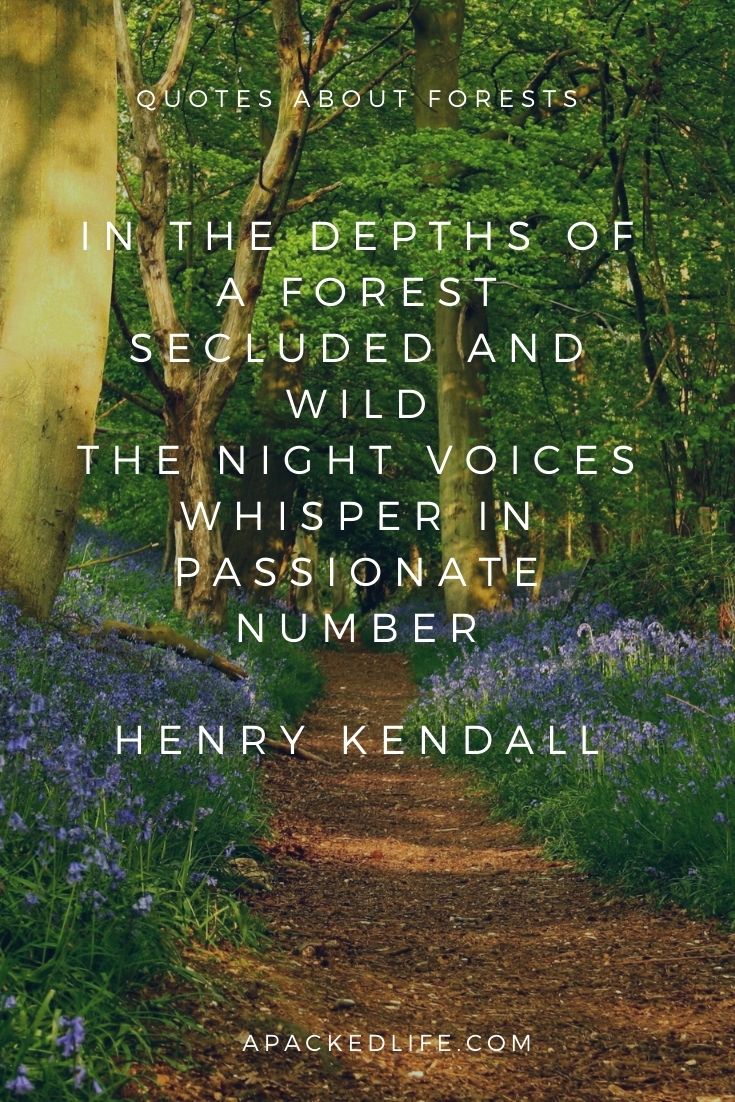 The Magnificence of Trees

Here grew willows and alders, their leaves twisted like giants’ sinews. Around them bark lichen bloomed blue-white in the darkness.  It felt like a good place, where there was old magic.  Duncan Harper

I tried to discover, in the murmur of forests and waves, words that other men could not hear, and I pricked up my ears to to listen to the revelation of their harmony.  Gustave Flaubert

The forest was not dark, because darkness has nothing to do with the forest – the forest is made of life, of light – but the trees moved with the wind and subtle creatures.  Lauren Groff

In the forest of a hundred thousand trees, no two leaves are alike.  And no two journeys along the same path are alike.  Paulo Coelho

Forests are the lungs of our land, purifying the air and giving fresh strength to our people.  Franklin D Roosevelt

There were maples and oaks to the west and a hemlock village to the right that pulled me right across the sweet grasses, into it.  Never, never have I seen such trees.  They were giants – old, old giants.  They must have been there when the world began.  Jean Craighead George

The fallen leaves in the forest seem to make even the ground glow and burn in the light.  Malcolm Lowry

A grove of giant redwoods or sequoias should be kept just as we keep a great or beautiful cathedral.  Theodore Roosevelt 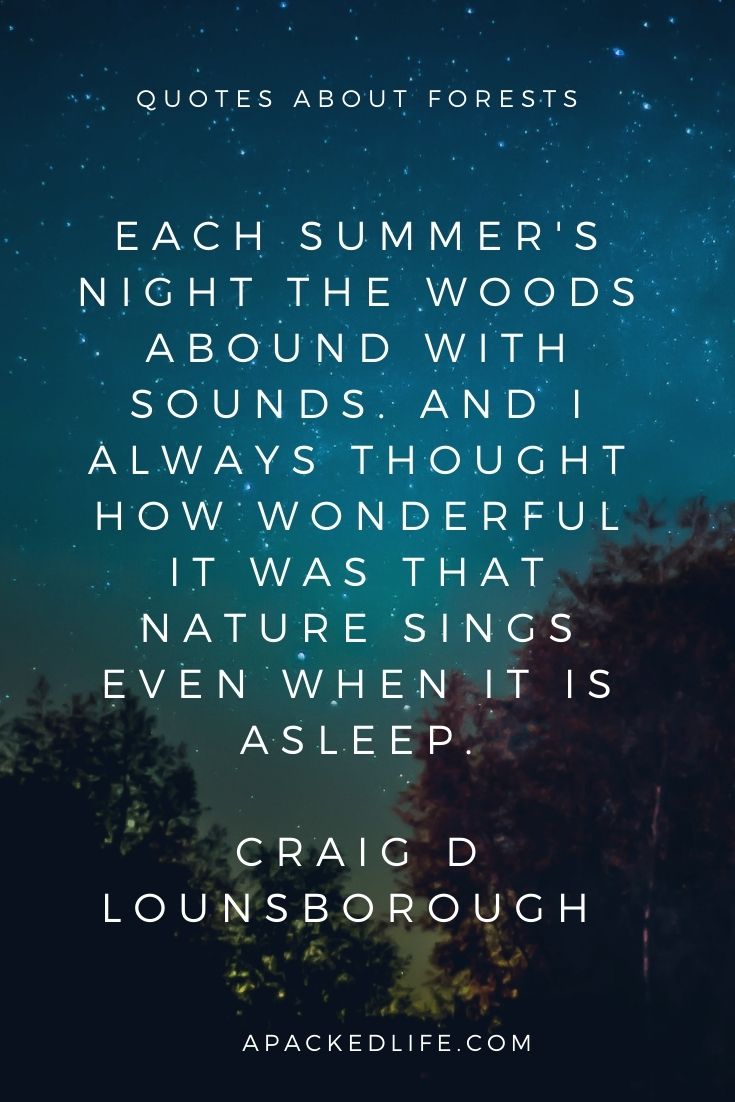 For in the true nature of things, if we rightly consider, every green tree is far more glorious than if it were made of gold or silver.  Martin Luther

Glorious are the woods in their latest gold and crimson

Yet our full-leaved willows are in their freshest green

Such a kindly autumn, so artfully dealing

With the growths of summer I have never yet seen

I frequently tramped eight or ten miles through the deepest snow to keep an appointment with a beech tree or a yellow birch, or an old acquaintance among the pines.  Henry David Thoreau

All forests have their own personality,  I don’t just mean the obvious differences, like how an English woodland is different from a Central American forest or comparing traits of West Coast redwoods to the Sequoia forests of the American South West…they each have their own whispers and smells.  Charles de Lint 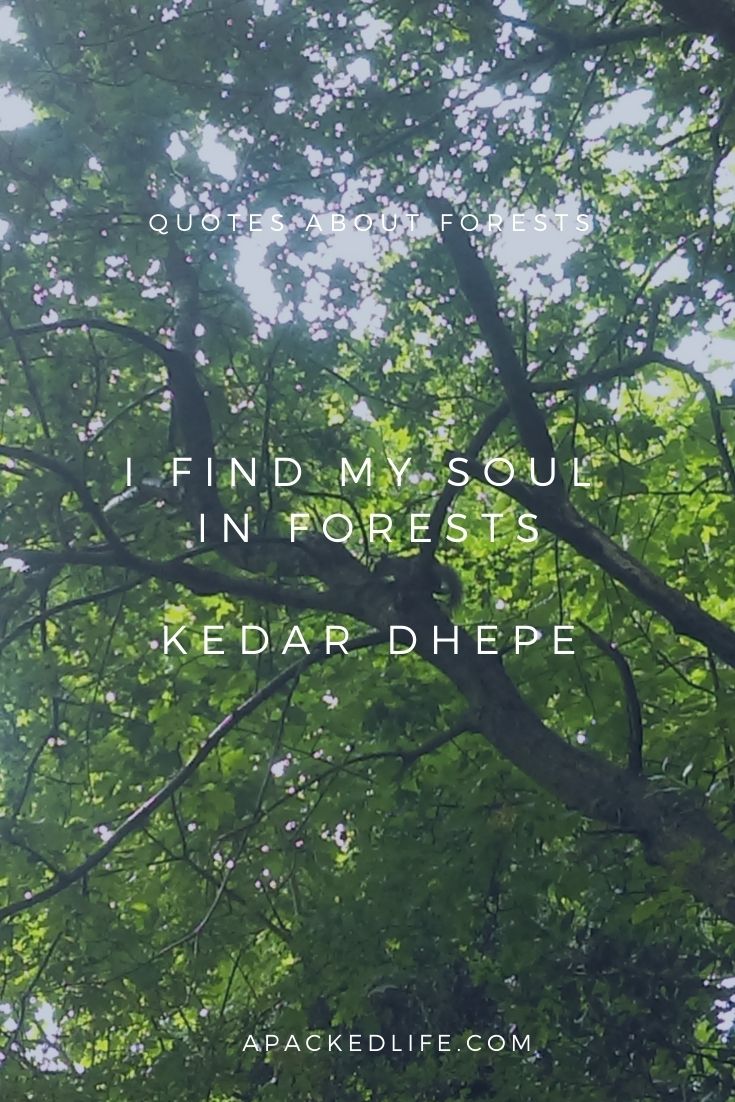 Quotes About Forests: the Wonders Of the Wilds

If you’ve enjoyed these quotes about forests and are yearning for more open spaces, why not investigate these quotes about the sea?  You’ll find more wild places to enjoy in England’s best kept secrets, great things to in the Yorkshire Dales, and the best places to visit in the Lake District or our exploration of things to do in Cornwall, land of myths and legends.  And if you’re looking to stay wild in England, why not explore these beautiful national trails?

We couldn’t have a set of quotes about forests without paying tribute to the magnificent Bob Ross, a man whose voice is as calming and melodious as the trees themselves. 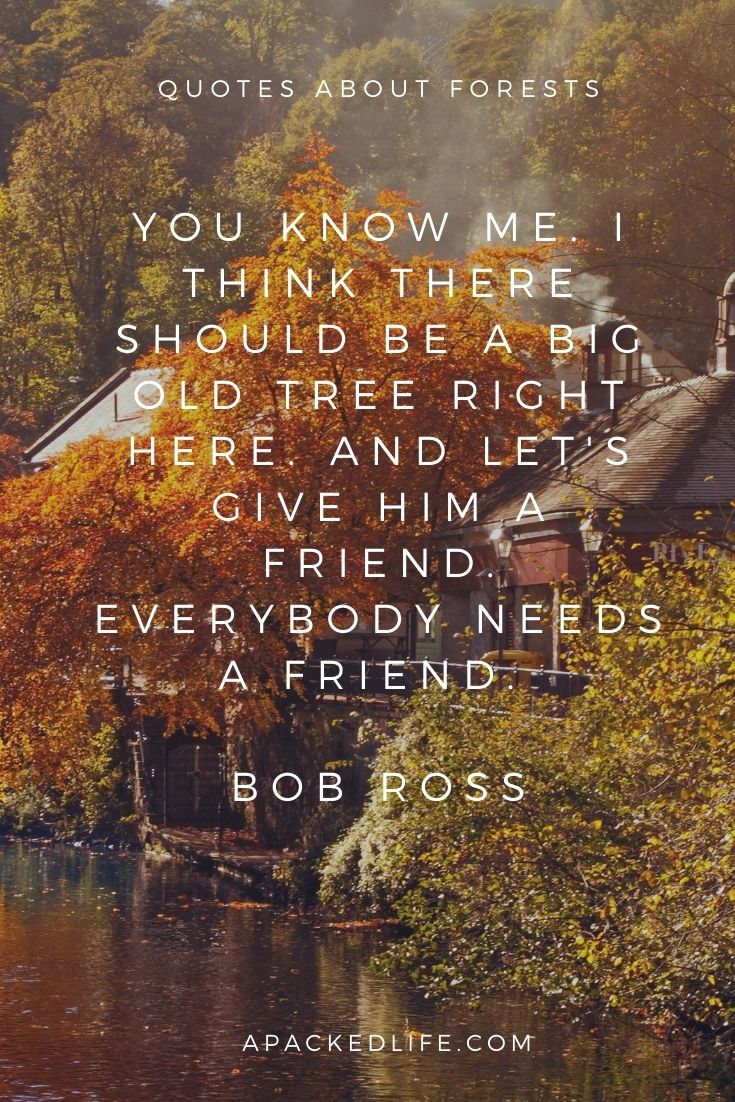