The drive to Dockery Farms

We’d spent the morning at the Shack Up Inn, lazing over a Gospel bruch, and listening to some cigar box blues.  We’d had some wide-eyed exploration of all the Americana on site, from advertising signs and bottle trees to old boxcars and an engine, farm machinery and the shotgun shacks of the sharecropper cabins.  Miss Scarlett, our hire car, was gently heading us further south, at times on roads that had no visible landmarks save the road we were traveling.

We’d happily punched in Dockery Farm to the satnav, and thought we were headed in the right direction.  But instead, we found ourselves in farmland for sure, but agricultural farmland rather than Dockery Farms itself.  There was a silo, baled hay, a distant water tower.  And we had a sense of just how massively big America can be when you’re lost in what seems like the middle of nowhere.

Once I was checking to hotel and a couple saw my ring with Blues on it. They said, ‘You play blues. That music is so sad.’ I gave them tickets to the show, and they came up afterwards and said, ‘You didn’t play one sad song.’ Buddy Guy

We drank a lot of water, pondered for a while, and reprogrammed Miss Scarlett.  Her second choice of Dockery looked rather more promising.  And when we spotted the buildings, with the large sign at the front, we were delighted to have the place almost to ourselves.

“You might say it all started right here.”  BB King 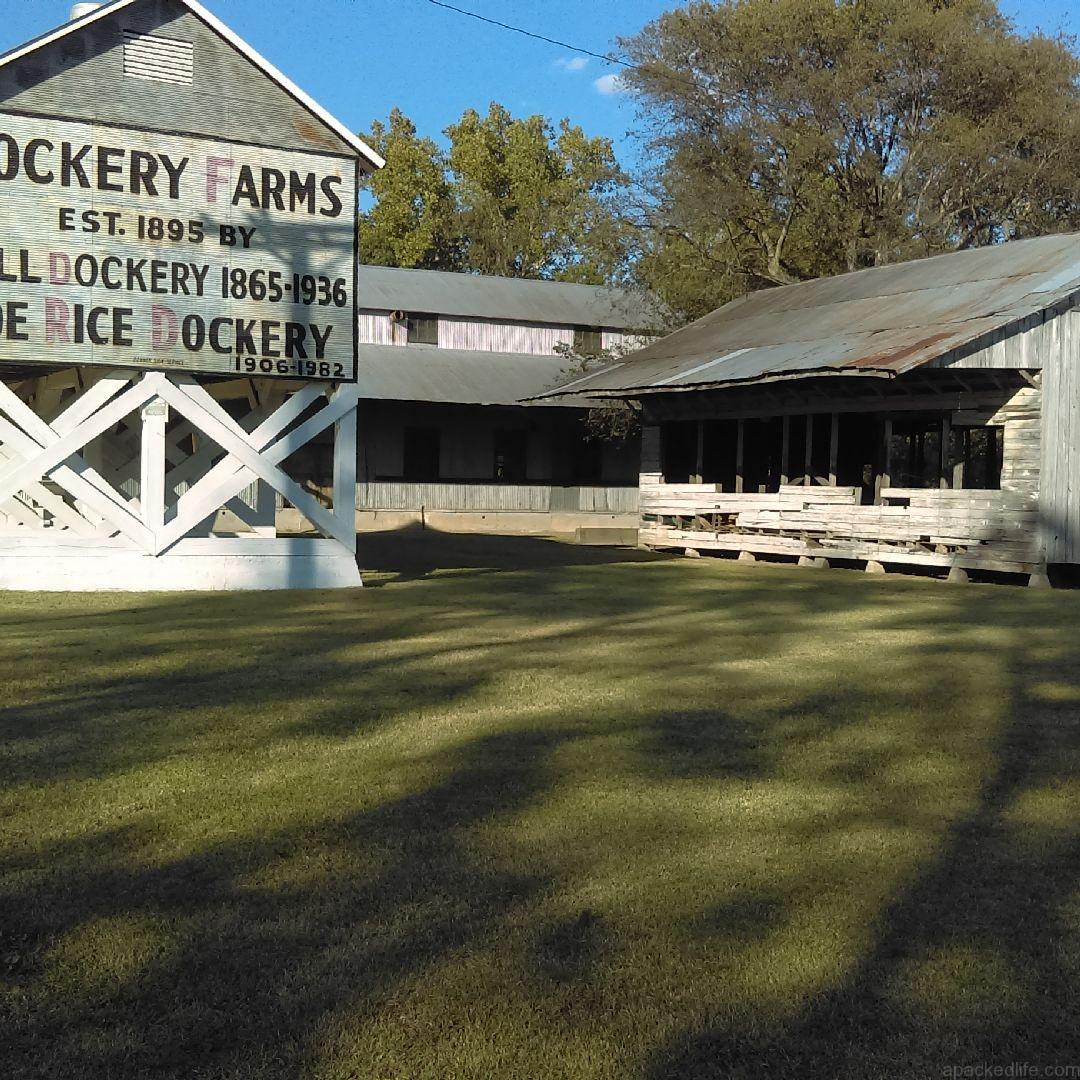 As you pull in, you can immediately see the Dockery name on the first building.  There’s space to leave the car, and then the whole site is open to explore on foot, taking your own time to absorb what’s here.

The Story of Dockery Farms 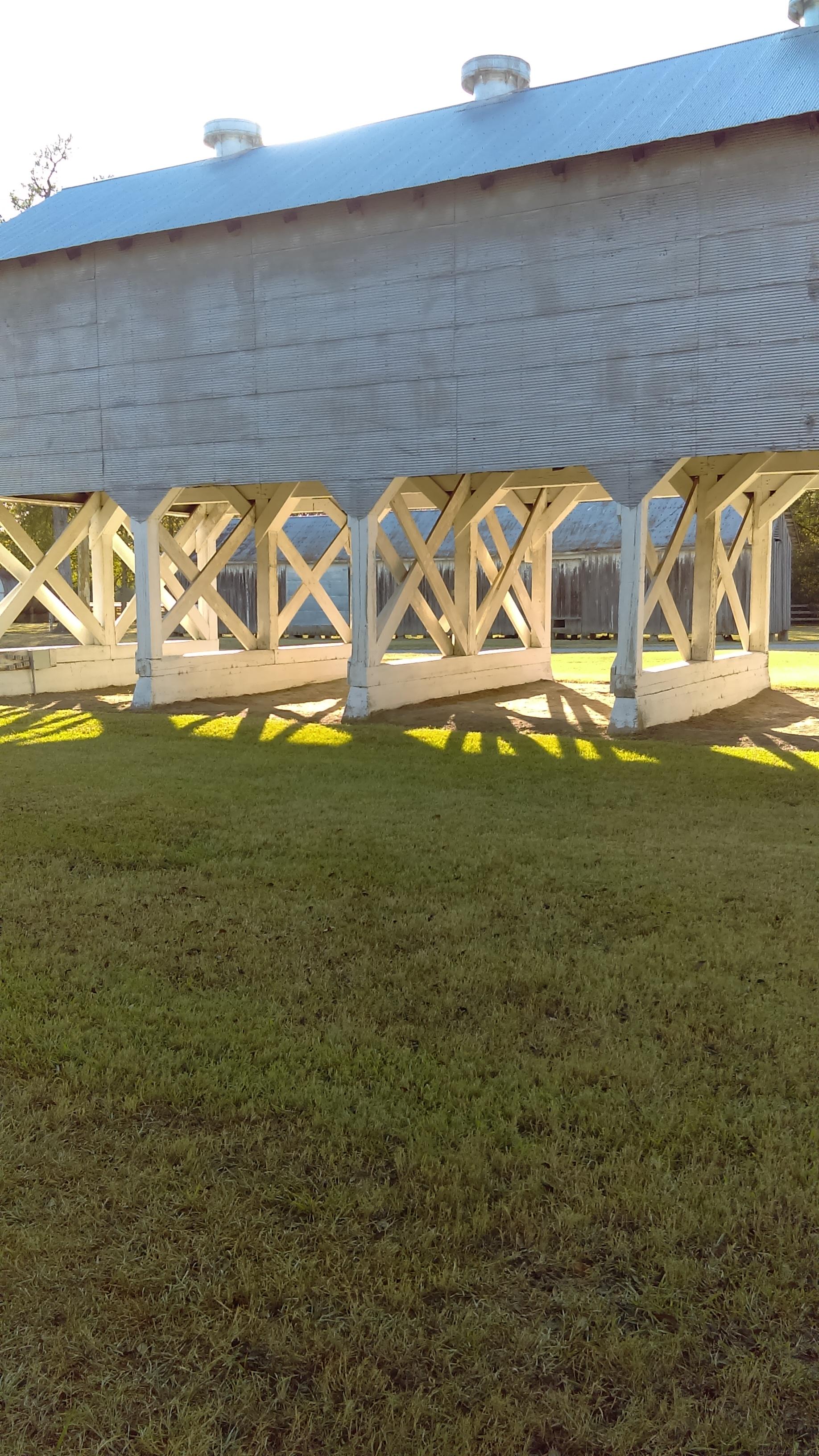 Born at the end of the Civil War, Will Dockery would go on to buy a parcel of land in the Mississippi Delta and start up a farm on its 40 square miles.  He offered fair contracts to labourers, enabling some to prosper.  The Jim Crow law of 1900 effectively abolished civil rights, but Dockery continued to pay fair contract rates.  The following decades saw the birth of notable blues figures such as Robert Johnson (the Devil’s Crossroads is not far from Dockery) Charlie Patton and Howlin’ Wolf.

Charlie Patton, the Father of the Blues, was on the Dockery Plantation for nearly thirty years intermittently.  He influenced many of those who followed, which is why Dockery Farms is considered to be the birthplace of the blues. 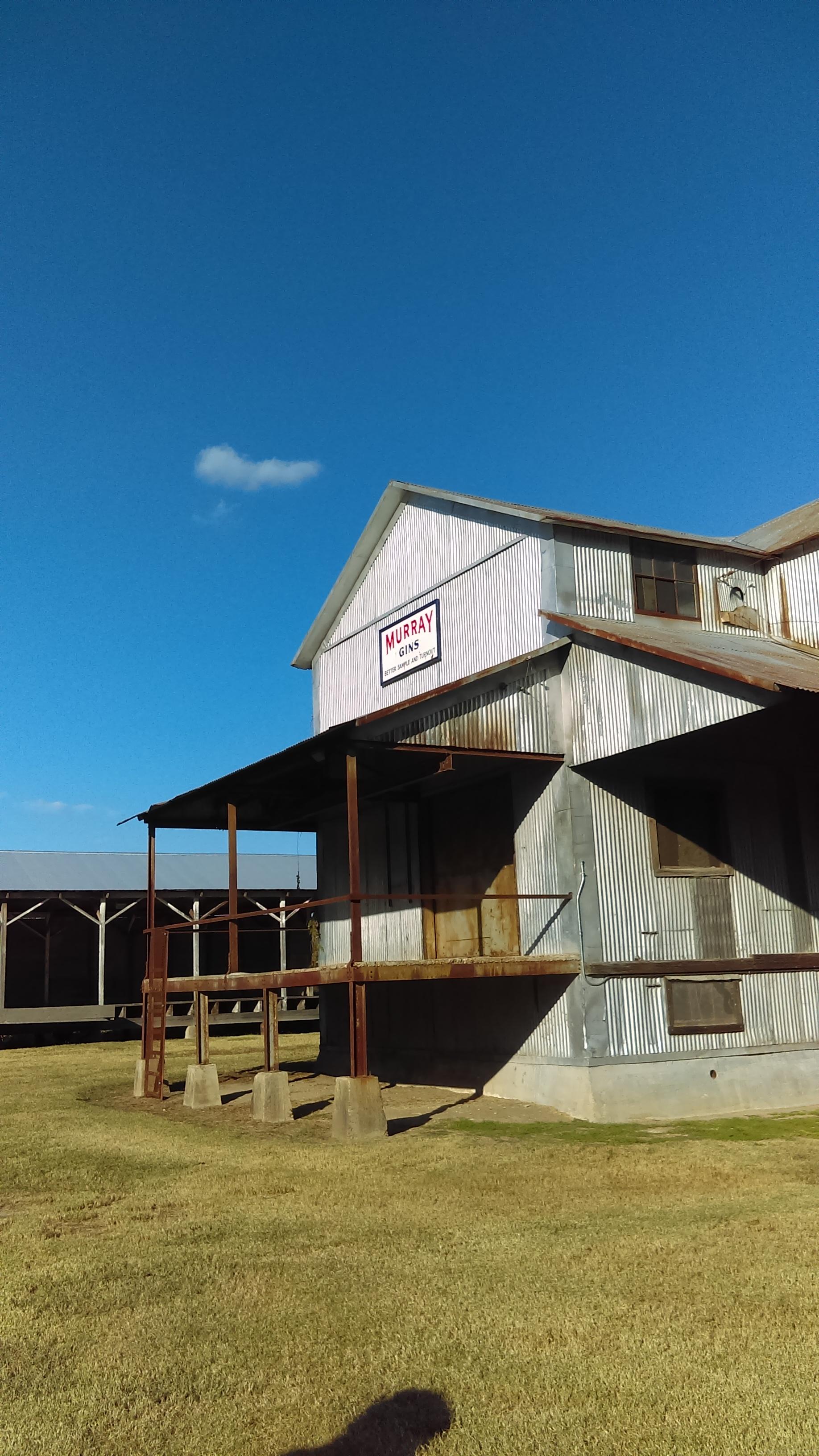 The Sounds from Dockery Farms

If you’re wondering about the relevance of this music, if you’ve ever listened to Dylan, the Stones, Clapton, Led Zeppelin or the White Stripes, the influence of the blues is massively present.  And the field at Dockery Farms is thought to be where it all began.

Some of the most important blues songs were re-recorded by later artists, such as Crossroads (Eric Clapton), Death Letter (the White Stripes), Little Red Rooster (the Stones), Long Snake Moan (PJ Harvey) and When the Levee Breaks (Led Zeppelin). 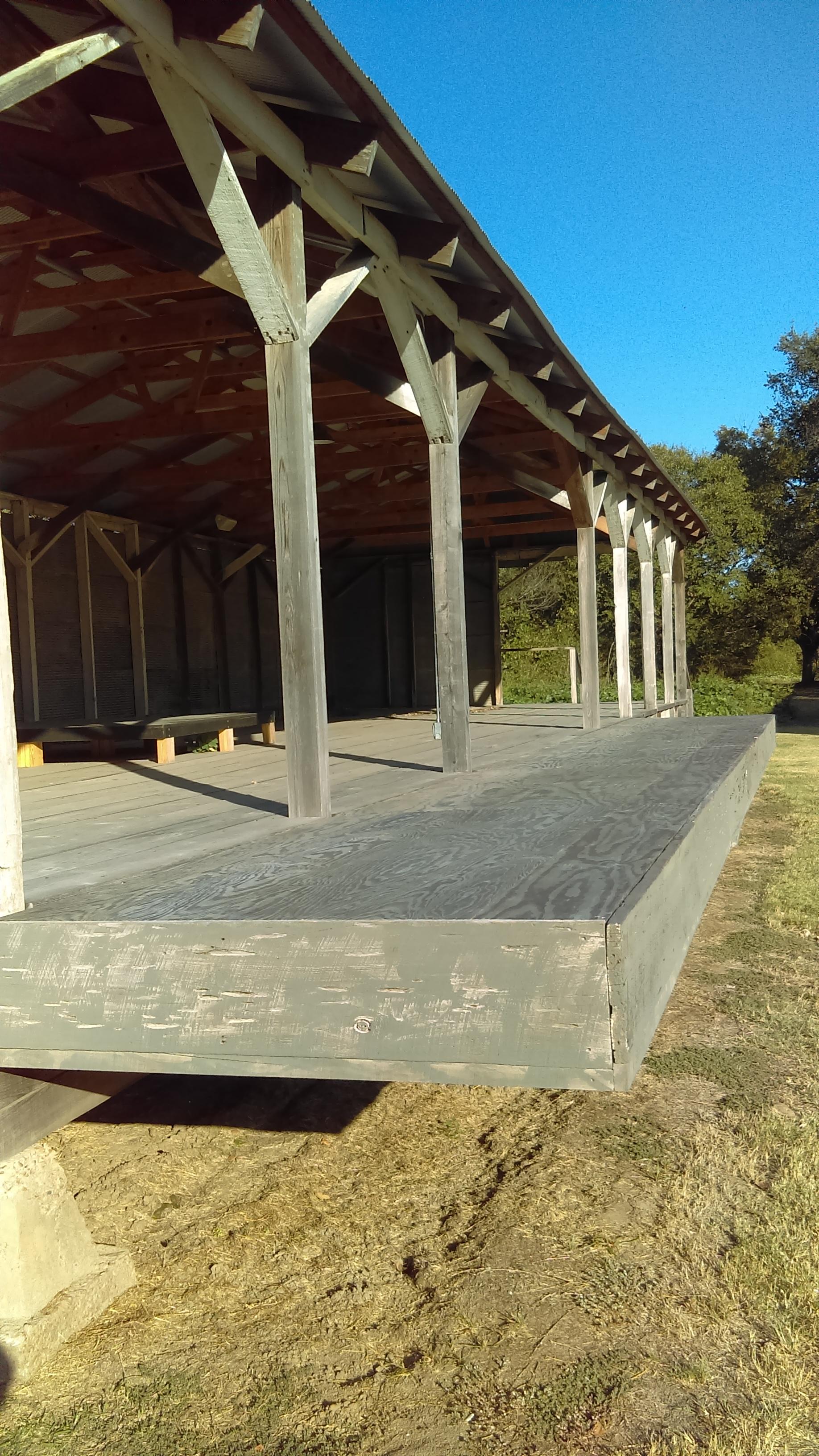 My memories of Dockery Farms

“The blues ain’t nothing but a good man feelin’ bad.” Leon Redbone

We were lucky to meet a family there for a photo shoot with their small daughter.  While she had pictures taken, we sat on the edge of an old well, and talked to her dad, an agriculturalist.  All this time later, I still remember the ease of that conversation, of the things we learned about growing food in one another’s countries, and of the sheer pleasure of meeting people on the road. 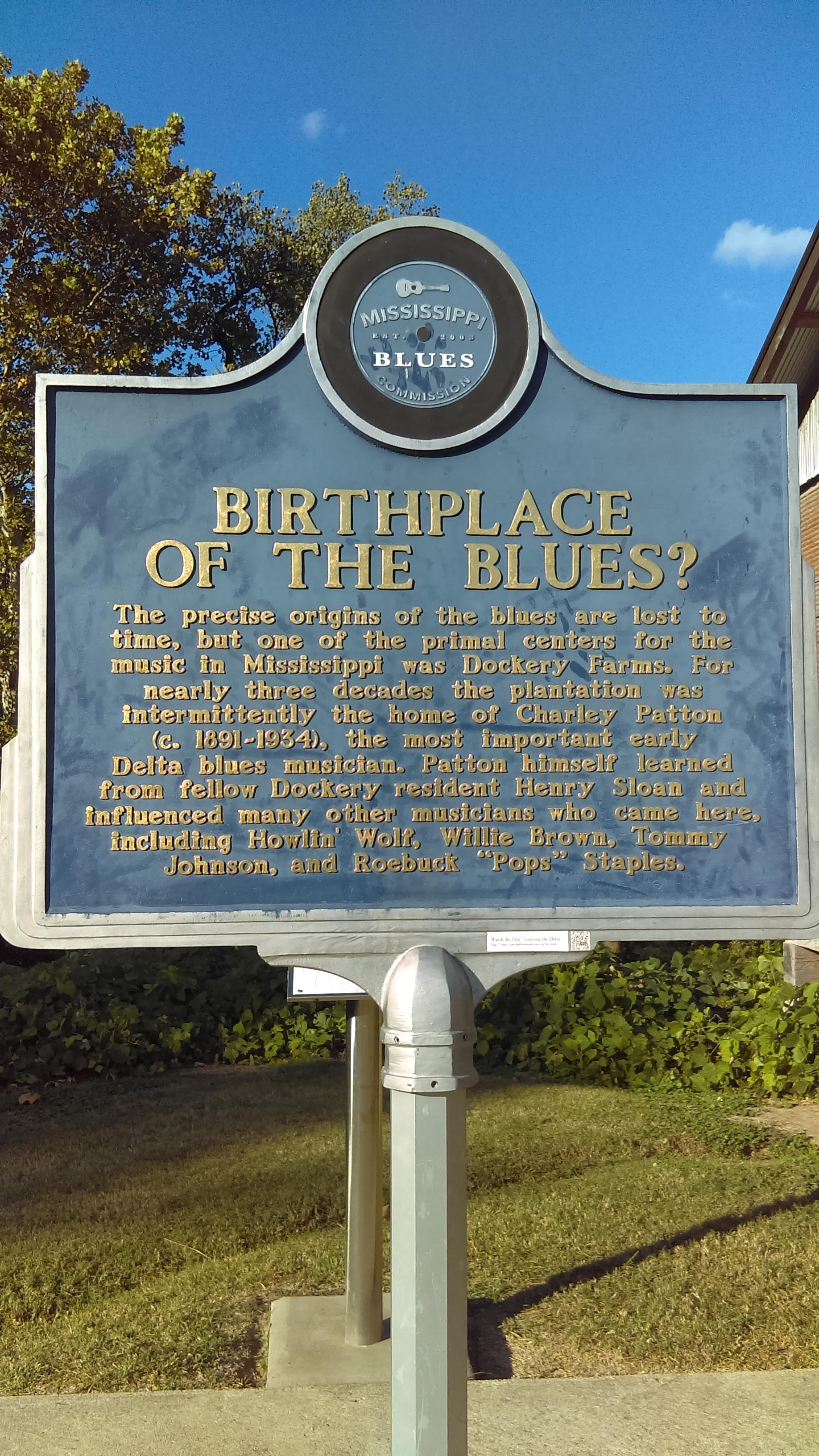 And Dockery?  Well, there are the sounds.  The river, babbling gently in the background.  The rustle of the wind in the long grasses.  Birdsong.  And song.  Songs that had brought us to Dockery in the first place to hear the story of the blues.  The blue board sign on the site gives you the opportunity to play some of the music that was shaped in this place.  And I can feel the goosebumps rising again as I think of those sounds easing across the farm on a warm afternoon as I sat on sunbaked wooden steps swinging my feet in the sheer pleasure of the moment.

And the sights.  A cat, rolling lazily in the pebbles, and seeming to share the chill of the warm afternoon.  The intricate shadows cast by the wooden supports to the buildings.  Peeling paint on the signs, and the beautiful old fonts used.

Dockery even smelled good.  Of sunbaked wood, and grasses and the river.  You may have gathered I loved my time there, and I’d definitely urge you to visit.

You’ll find Dockery Farms two hours south of Memphis and two hours north of Jackson.  Memphis is the nearest larger airport, although there’s a smaller option in Greenville.  It’s not as difficult to find as you may think; we were in too deep a chill when we made our unintended diversion, which was fascinating in its own right.

The site is open from sunrise to sunset, with most of the site being outdoors and easily accessible.  There’s a secure box to leave your donation for the site’s upkeep.  And it was beautifully kept indeed, with a great balance being struck between keeping the site tamed and just wild enough too.

If you’re following the Mississippi Blues Trail you’ll have seen above that it has a marker at Dockery Farms. The Blues Trail has an app available through iTunes or Google Play, and you can find many more nearby markers to guide you through your Delta Blues trip.

The following sites are helpful for your visit

Some of the greatest blues music is some of the darkest music you’ve ever heard. Bruce Springsteen

I’ve talked more about the delights of Nashville and Memphis here.  We drove the Blues Highway, a fantastic trip and one I highly recommend.  I also wrote about our experiences at the National Civil Rights Museum in Memphis here. 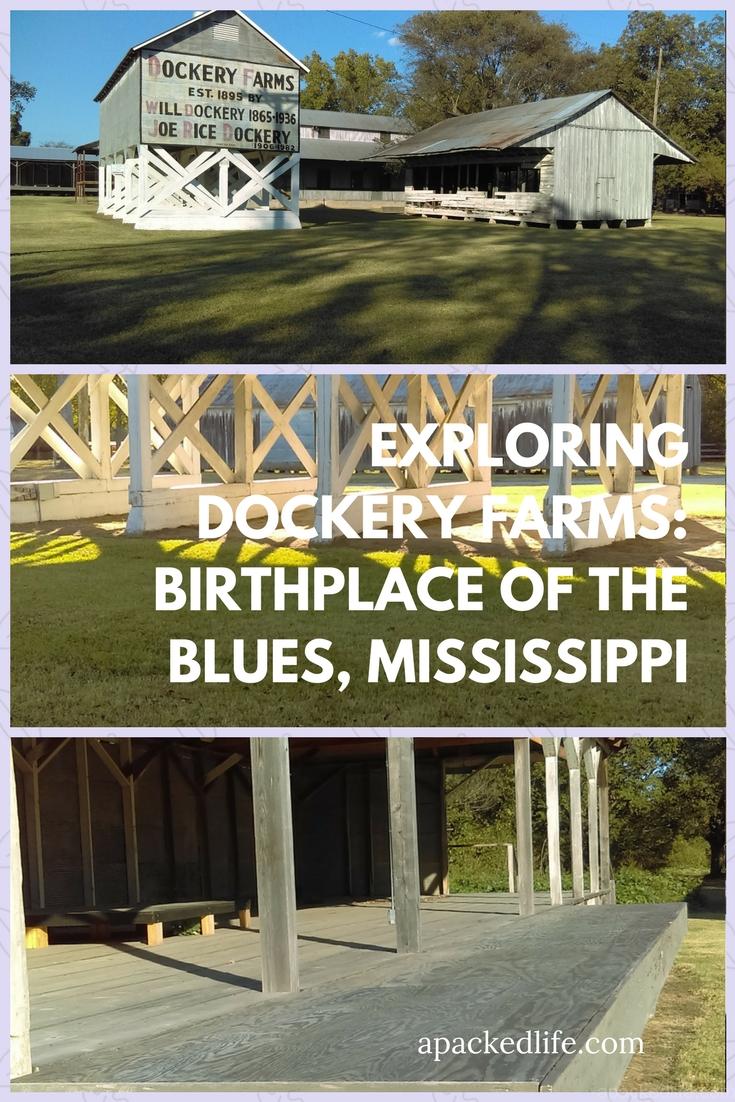