I love London, but it’s just so big, so diverse, so London, that it’s difficult to get a grip on the experience.  I’ve found that it’s a lot easier to get my head around this majestic city by devouring its experiences in bite sized chunks.  This week I found myself in Shad Thames.  It’s a familiar name, but a place I’d not visited until now.  I enjoyed spending a day wandering its small and intriguing streets, and taking in major sights and lesser known curiosities.

Shad Thames: Getting There

The mainline London station to Shad Thames is London Bridge, which is also the tube station, served by the Jubilee and Northern (Bank branch) lines.  From the station, it’s less than ten minutes walk (and a beautiful walk at that) down to the river, and then onward to Shad Thames.  You’re south of the river here, and it forms a big part of the day of your visit.

London Bridge mainline station is currently undergoing a big development programme due for completion in 2018.  The signage for the development proclaims that the station will be longer than the Shard is tall when work is complete.    It’s the oldest mainline station in Zone 1, and one of the oldest in the world, having opened in 1836.   It’s also the fourth busiest station in London and the UK overall.  Be prepared for a fair bit of bustle and hustle as 70 million people pass through here each year.

The area around London Bridge station isn’t short of the big London sights.  As you emerge from the station onto Tooley Street, turn right and follow along the line of Hays Galleria to the left.  Then walk left into the pedestrian area of More London.  Stepping carefully out of the way of the passing crowd, turn around and look back.  Yes, that’s the Shard.  You can book to see the spectacle from London’s highest viewing platform here. 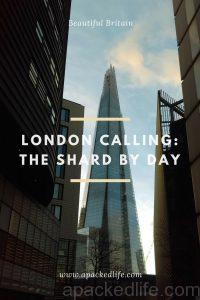 Whoever put the sightlines of More London and the Shard together had a beautiful vision.  As you enter More London, your attention is captured by the view of the mighty Thames.  Then when you turn around, you can see the Shard perfectly framed by the buildings and trees of the city.  Glorious. 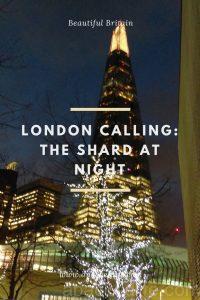 More London itself has some interesting extra details.  There’s a tiny stream that runs down the centre of the walkway, carrying leaves along in their own game of Poohsticks.  At More London you’ll find a whole lot of restaurants and cafes, many reasonably priced, in which to fuel your adventures. 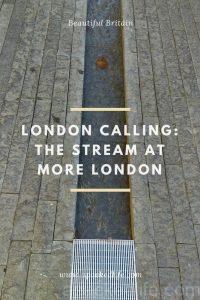 Once you emerge onto the riverside, you can start playing spot the sights.  There’s the iconic Tower Bridge itself, under whose arches you walk through to Shad Thames.  In front of you is the Gherkin, emerging in deep sea green splendour from a cluster of other tall buildings.  And to the left, you can see the beautiful dome of St Pauls, serene, ornate, and commanding attention.  You can read more about all the key things to do in London here, setting out so many ways to spend your days.

It reminds me of all the reasons I love London.  Imagine yourself bundled up on a crisp winter day, like the one on which I visited, walking the Thames Path, transfixed by the skyline.  You can try to name the bridges in order, although we’ve not yet managed that.  You can watch the river life going by, almost like a city within a city.  And in summer, I can imagine, even with my limited arty skills, sitting on a wall and trying to commit that beautiful cityscape to paper.

Shad Thames: On The Mighty Thames

Let’s stop for a while as we come out of More London and just admire the magnificence of the river.  The Thames is such a big beast, and here you get a sense of the mightiness of her service to the capital.  You can see her life as a source of pleasure: there are large and small trip boats plying their way up and down at varying speeds.  Then there is the Thames as trade route and public service, with river police and a fire boat, plus four lifeboat stations.  Cargo can make its way as far upstream as the Pool of London, a stretch of the Thames from London Bridge to just below Limehouse.

You can read more about the Thames from its origins in the Cotswolds through the Thames Estuary to the North Sea here.  The Thames Path will take you on a magnificent waterside walk through the capital and beyond.

As you reach the riverside, you come to City Hall.  It’s beautifully wonky, which probably isn’t the most poetic description you’ll hear of a public building, but it’s exactly what I thought when I saw it.  It’s as though someone had propped up some bongos at an angle. 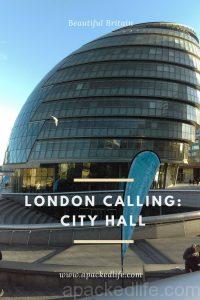 The unique shape, from Foster + Partners architects, is due to the need for energy management in a building made from glass.  It has no back or front, and is described as a geometrically modified sphere.  That minimises the surface area of the roof exposed to sunlight, which avoids the building overheating.  The shape also has a quarter less surface area than a cube of the same volume.  That keeps the building warmer in winter and cooler in summer.  It leans back from the river, so as not to overshadow the walkway.  I love the brilliant thinking behind this place, and it’s a beautiful building too.

When you first arrive at the river, your attention is drawn to two beautiful and iconic London sights.  Across the broad reach of the Thames, you’ll see the Tower of London, blonde, turreted and with a prime position that befits its status.  Look right, and you’ll see Tower Bridge.   It’s London encapsulated in one beautiful vista.  It was so gorgeous that I just stood for a few minutes, ignoring my freezing hands and feet, and appreciated the joys of being there, the wind blowing in my hair, sun on my shoulders, and London stretching before me. 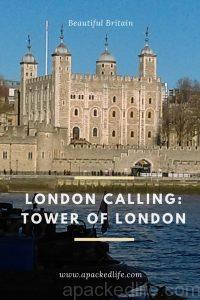 Tower Bridge keeps on giving the closer you get to it.  You know that it’s a combined bascule and suspension bridge, with the two robust towers supporting two walkways.  It’s free to walk the bridge deck, although access to the towers and many of the original workings is chargeable.  You can find a lift or stairs taking you up from from riverside to the bridge deck.  It’s still a busy Thames crossing here, carrying over 40,000 people a day.

The bascules are raised about 1000 times a year, with a schedule published on the bridge website here.  The current schedule shows the paddle steamer Dixie Queen keeping the bridge staff busy.  Sadly I didn’t get to see it in action on the day of my visit, although you can work out from the frequency that you stand a good chance of catching a ship passing through.  I didn’t know, before consulting the website, that the bascules are raised as far as is necessary for a ship passing, but all the way up if there’s a royal connection beneath. 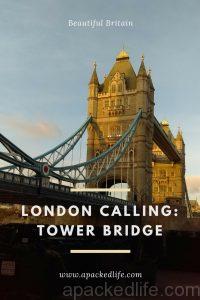 I loved the tale of Gladys, a Thames sailing barge on her timely way to a date in St Katharine’s Dock.  By keeping to her schedule and needing the bascules to be raised, she managed to divide the motorcade of President Bill Clinton, who was running late after lunch with then PM Tony Blair.  While the President’s security staff were having what can only be described as a bad day at the office, a spokesman for Tower Bridge commented, in a very British manner:

We tried to contact the American Embassy, but they wouldn’t answer the phone.

You’ll find Shad Thames named on a map from 1747.  The street itself gives its name to the surrounding area, which is also known as Butler’s Wharf after one of the large warehouses.  In Victorian times, this was one of the largest warehouse complexes in London.

“…the whole line of street—called in one part Pickle Herring Street, and in another Shad Thames—exhibits an uninterrupted series of wharves, warehouses, mills, and factories, on both sides of the narrow and crowded roadway” Old and New London 1878

Back in the 1970s, the cheap price of property saw the area host many artists from David Jarman to David Hockney.  Subsequent regeneration has led to a massive increase in prices and today, the area is full of apartments, small offices and independent stores.  Some of the streets are still cobbled, and carry overhead “bridges” many stories above your head and high above street level. 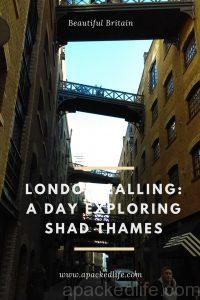 The history of the area is reflected in the many building names describing cargo that used to arrive at Butler’s Wharf: “the Larder of London”.  Buildings are named after spices and ingredients: vanilla, nutmeg, sesame.  The last major cargo ship to dock in the area sailed in 1972, but many nods to its heritage remain.

As I wandered along the cobbled streets, I spotted this sign. 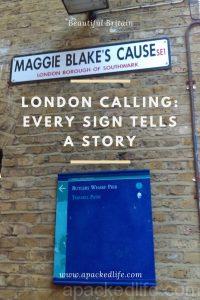 Curious, I took a picture, and resolved to investigate Maggie Blake and her cause later.  It’s a heartwarming tale.  The passageway is named after a community activist, and to mark a campaign for public access to the riverside.  The big development of Butler’s Wharf proposed to limit riverside access for local residents.  Maggie Blake’s campaign saved access to the water and views to Tower Bridge for everybody to enjoy.  You can read more about her work here.

As you walk through Hays Galleria and More London, you’re surrounded with all kinds of opportunities for eating and drinking.  There are many, many branches of national chains, providing plenty of safe options if, like me, you have food allergies and dietary restrictions.  There are also some interesting local additions.

There’s a bustling deli called Absolutely Starving on Tooley Street.  Its windows were packed with delicious-looking baked goods, and it was crammed with people.   On Shad Thames itself, you’ll find Caffe Paradiso.  It has reasonably priced food and drinks, and a comfortable atmosphere in which to chill and regroup.  There are additional dining options in Hays Galleria.   Here you’ll find a range of what I call real people shops: chemists, newsagents, high street staples.  Hay’s Wharf used to receive the tea clippers, and the building is magnificent.

Hays Galleria also boasts a centrepiece so interesting, I was fascinated to see it illuminated at dusk.  It’s a mythical beast: part ship, part animal, and beautifully highlighted in blue.  It’s actually a kinetic sculpture by David Kemp, although I didn’t see it move.  In many ways it seemed to sum up my day by the river, full of interesting pleasures, happily observed, and topped with unexpected delights. 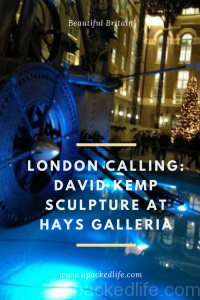 If you’ve enjoyed our trip around Shad Thames, why not join us in Shakespeare’s Stratford, Birmingham, the Welsh borders, the Highlands of Scotland or the Lancashire countryside?  There’s so much to explore in this small island.