If you, like me, are someone who is always happy to travel a few miles further in search of things unusual, then I have something rather special for you.  Here within this virtual page lies a rich collection of buildings that exist for no reason whatsoever.  A folly is an architectural concept of a place built just because you can.  And that’s a mighty fine reason to create something magnificent.  So here’s my quick tour of some of the most fabulous follies in England, well worth your time and exploration.

What’s A Folly?  And Why Should I Visit?

We’ve noted that a folly is a building constructed purely for decoration, and which serves no purpose.  The name has all the connotations of silliness associated with the French word folie, but the older meaning of the word is something of delight.  That fantastic mixture of frivolity and pleasure really captures the essence of what makes a folly.

Normally follies have no purpose other than ornament, or their true purpose is disguised.  They are often eccentric in design or construction.  This can involve an element of fakery, including the creation of sham ruins.

The fashion for follies crept across landscape gardens in France and England from the eighteenth century.  Here you could find anything from mock-Roman temples to pyramids and ruined abbeys.  In some instances, the buildings were constructed for altruistic reasons.  They provided employment for artisans and laborers when there was no other work available. 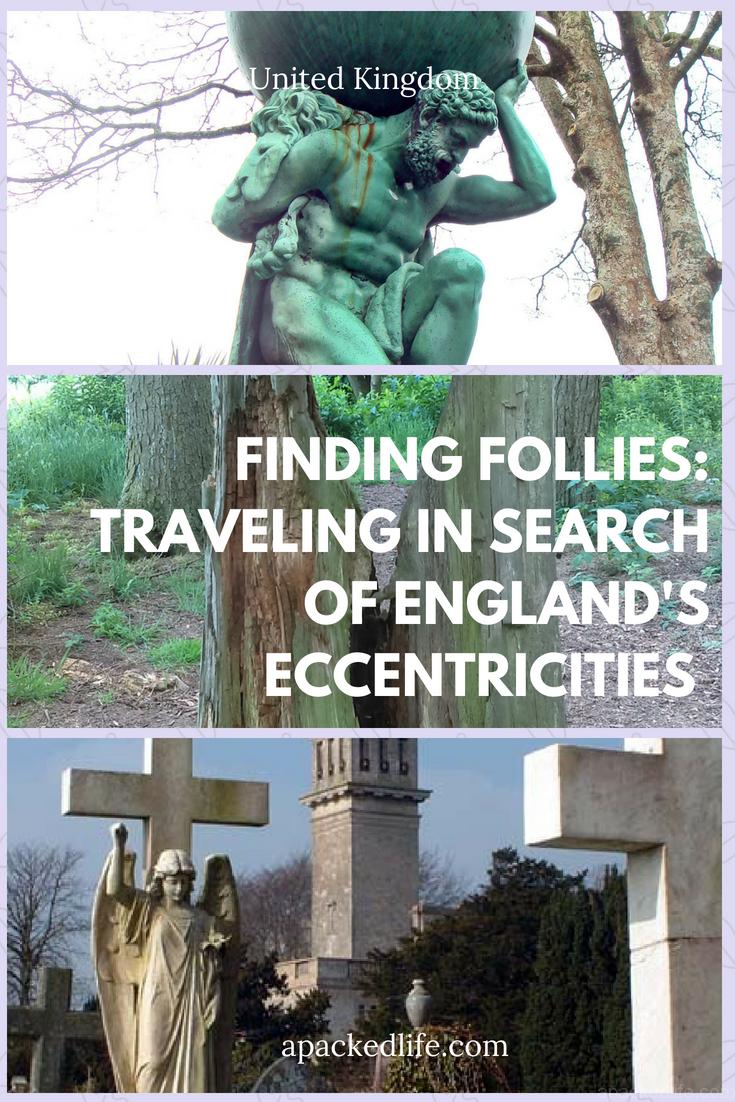 As for why you should visit, well follies are some of the most amazing constructions with interesting histories that you could find.  Until I visited Farington Folly recently, I hadn’t realised quite how many other follies had captured my attention over the years I’ve been exploring.  Here’s my guide to the most fascinating, fabulous and frolicsome follies you can discover in England. 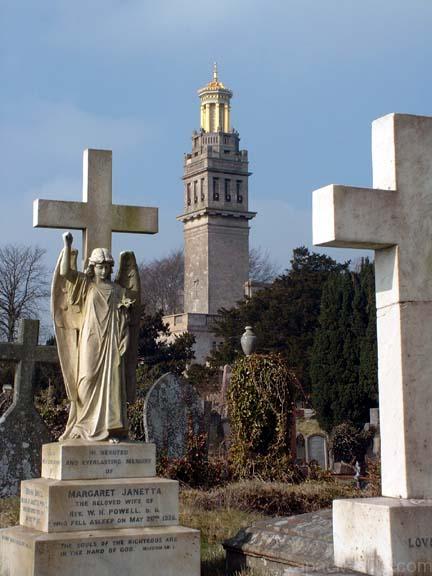 Originally known as Lansdown Tower, you’ll find Beckford’s Tower on Lansdown Hill just outside Bath in Somerset.  This is a listed building, and appears – along with its adjoining cemetery – on the Register of Historic Parks and Gardens Of Special Historic Interest in England.  Having got that rather lengthy and splendid accolade captured, I can go on to tell you that the tower was originally built for William Thomas Beckford.

Beckford was a novelist, critic and art collector.  He used the tower as a library and a retreat, a concept which makes me deeply jealous.  The cupola at the top acted as a belvedere providing views across the countryside.  The Italianate building at the bottom of the tower housed drawing rooms, and the grounds between the tower and Beckford’s house were landscaped to create an area known as Beckford’s Ride.

The tower and its lands were donated to the local parish on Beckford’s death, and the cemetery was created, with a drawing room being converted into a chapel.  Following damage by fire and the closure of the cemetery, the site was eventually taken over by the Bath Preservation Trust.  There has been extensive renovation, and a museum now exists on the site, displaying the furniture originally made for the Tower. There is also a fascinating collection illustrating Beckford’s life as a writer and collector.  You can find out more about the tower here. 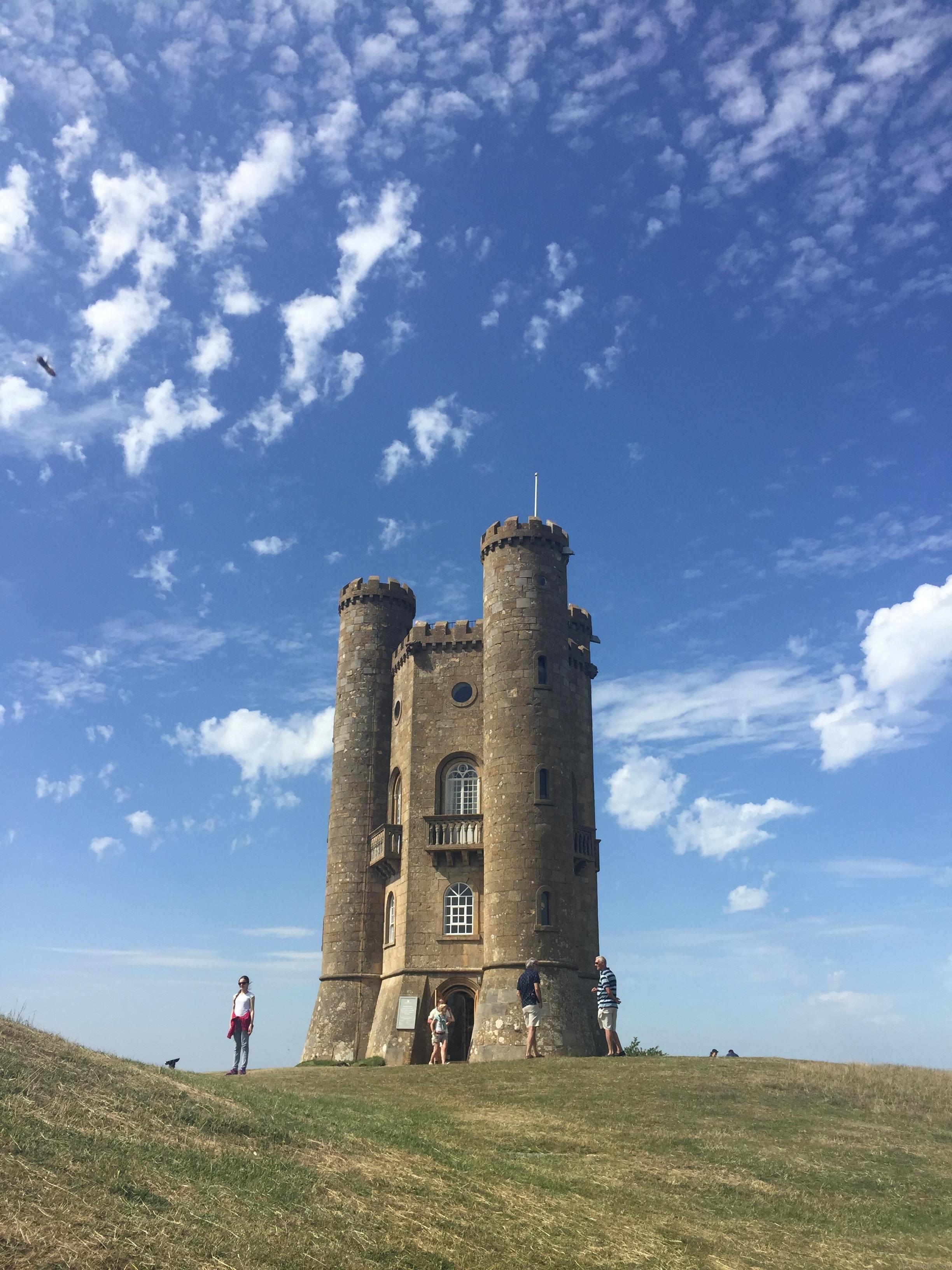 If you’ve ever visited the Cotswolds and stopped off at the honeyed stone beauty that is the village of Broadway in Worcestershire, you can’t fail to have noticed Broadway Tower dominating the skyline on the hill.  This particular folly has an absolutely fascinating history.

Conceived as a Saxon Tower, the idea came from Capability Brown, and the design from James Wyatt in 1794.  Lady Coventry knew that Broadway Hill was a beacon hill, where fires were lit on special occasions.  She wondered if a beacon there could be seen from her house in Worcester, more than 20 miles away.  And, rather than having a fire lit on the hill as you or I might have done, she sponsored the construction of the folly to test this out.

The Tower has had an arty career, being home to a printing press, and then a country retreat for artists including William Morris and Edward Burne-Jones, who rented it together in the 1880s.  The love of Broadway Tower caused William Morris to found the Society for the Protection of Ancient Buildings.

The Tower has also had a civic role.  In the late 1950s it monitored nuclear fallout in England, with an underground Royal Observer Corps bunker being built 50 yards away.  Staffed continuously from 1961, this was one of the last Cold War bunkers constructed.  Although it was officially stood down in 1991, it is one of a scant few facilities that remain fully equipped.  Near the tower you’ll find a memorial to the crew of a Whitley bomber that crashed there during a training mission in June 1943. 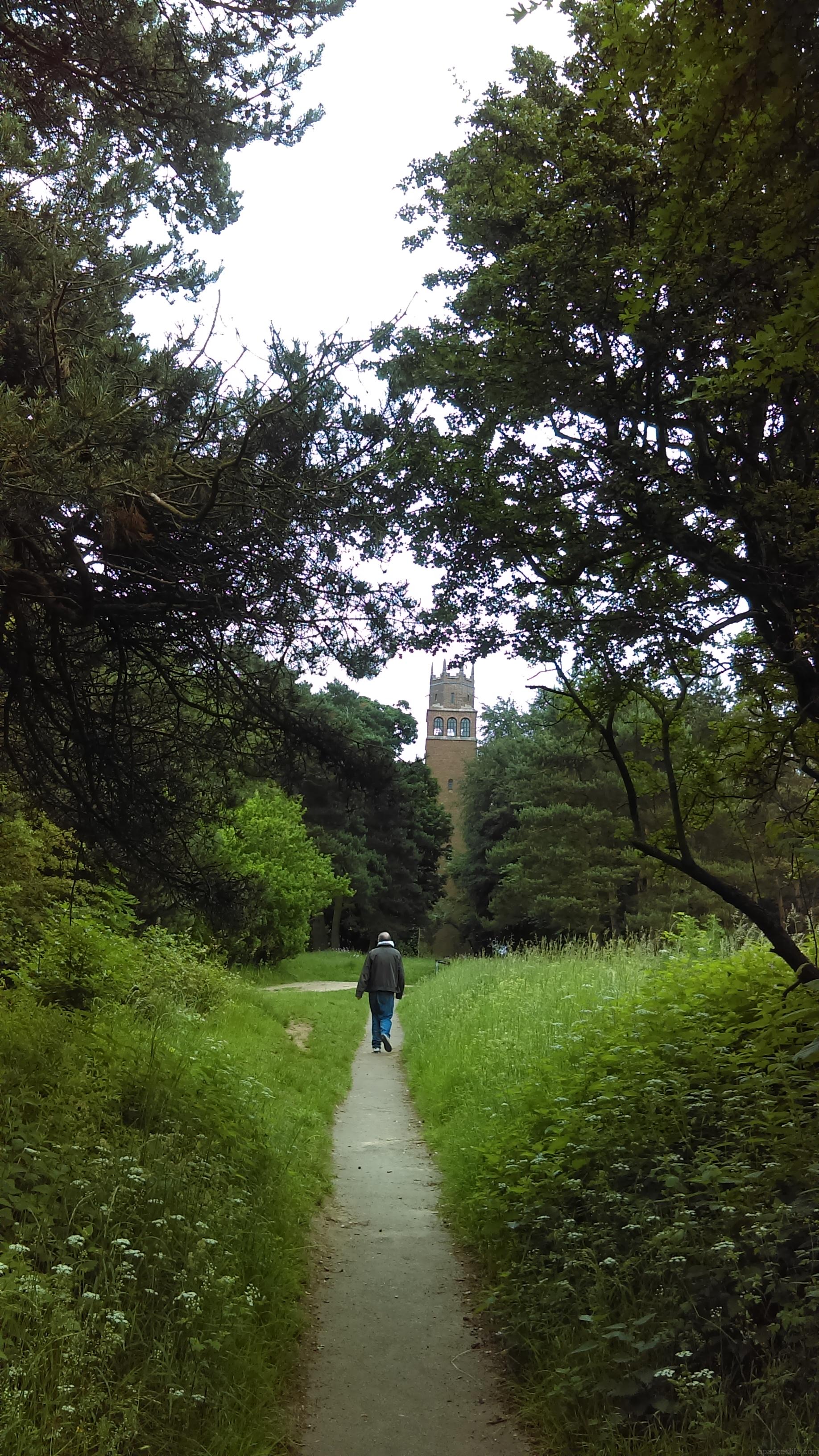 This, the folly I discovered most recently, was the one that got me thinking about other follies I’d seen.  Faringdon is a magnificent tower, created as a birthday present for the lover of Lord Berners: author, composer, and keeper of a rather wild literary and musical salon in Oxfordshire.  At Faringdon, the pigeons were dyed in pastel colours, horses were invited to afternoon tea, and I spied a sign, several meters up the Tower, imploring visitors (with good eyesight, I assume) not to feed the giraffes. 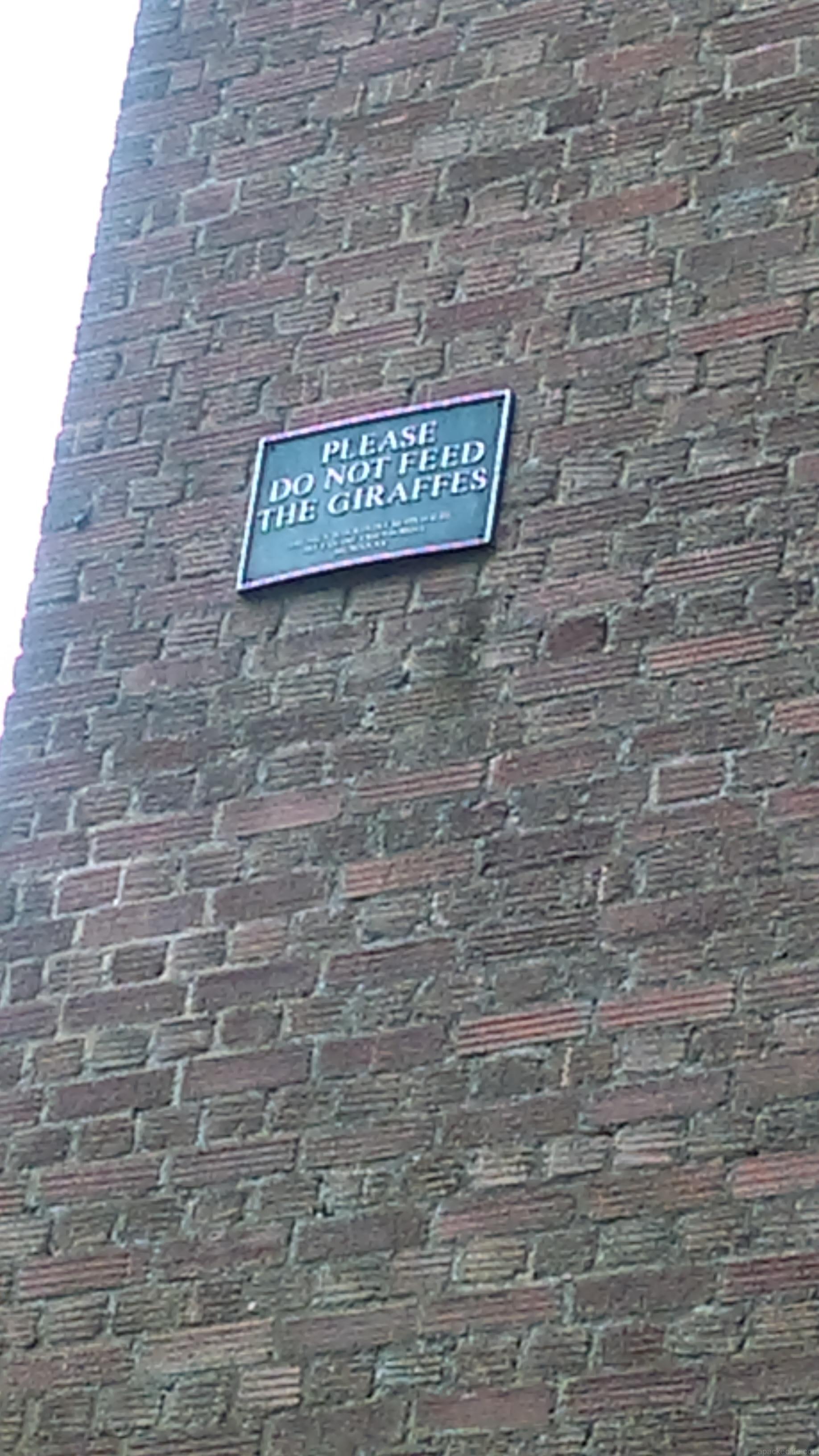 The route to Faringdon Folly takes you up a leafy path, tunelled with trees, until the vista opens up, and you suddenly spot the tower.  The Trust now responsible for its upkeep has created a wonderful and wonderous surrounding for the tower, full of toadstool rings, wooden sculpture and an enchanting wildflower meadow.  This is truly a magical place to explore.  Bring a picnic, perch on a toadstool, and watch the world become a happier and more vibrant place in this lovely setting. 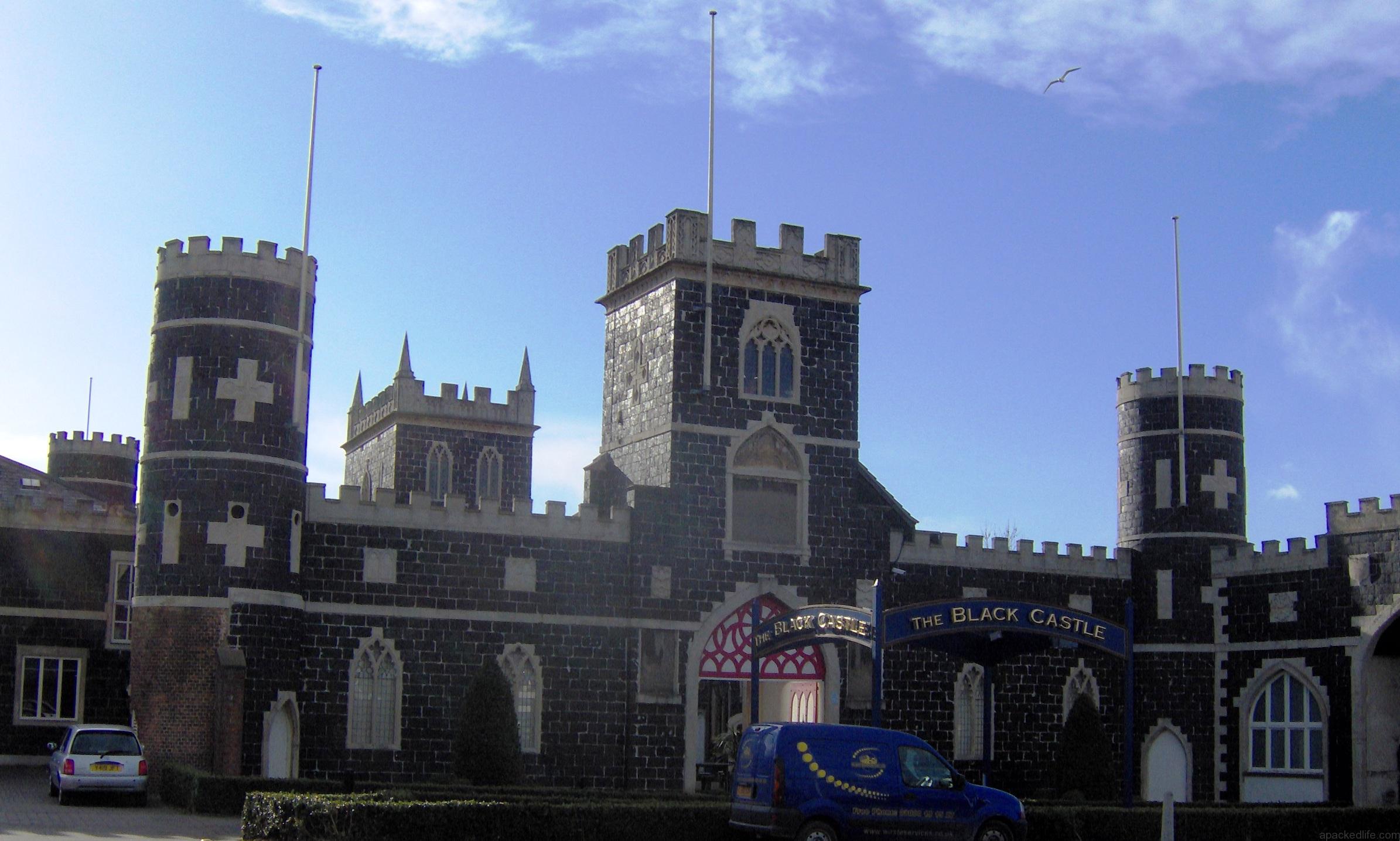 Although there are many great examples of architecture amongst England’s public houses, relatively few are actually disguising themselves as castles.  In the Bristol suburb of Brislington, you can stop off for a pint or a coffee at the rather magnificent Black Castle.

It was built in 1745 as a castle folly, and may originally have been a stable block and laundry for the local businessman William Reeve at nearby Mount Pleasant (now Arno’s Court).  The Black Castle is a symmetrical Gothic Revival building, with circular towers at each corner and a central courtyard.

Much of the stonework is believed to have come from the city’s medieval gates, and also the demolished St Werburgh’s church.  Now you can have lunch and a drink at the Castle while pondering the history of your rather unexpected surroundings. 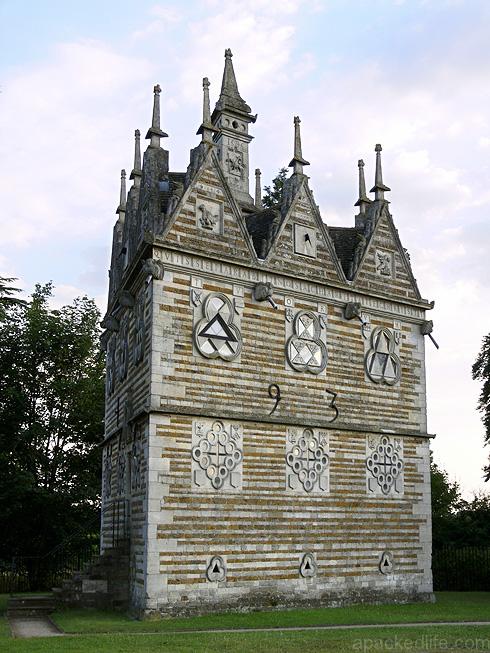 One of the most immediately recognisable follies, Rushton Triangular Lodge is now in the care of English Heritage, and is a Grade I listed building.  It was designed and constructed by Sir Thomas Tresham between 1593-1597, making it a very early folly.

The folly has a fascinating history, and shows that a folly does not have to be frivolous, but can reflect strong beliefs.  Sir Thomas Tresham was a Roman Catholic imprisoned for 15 years in the late sixteenth century for refusing to become a Protestant.  On his release, he designed the Lodge as a symbol of his faith, using the number three in its construction to represent the Holy Trinity.  The Lodge has three walls 33 feet long, each with three triangular windows and three gargoyles.  The building has three floors and a triangular chimney.  Running round the building on each facade are three Latin texts, each 33 letters long.

The trefoil shape used for some windows was the emblem of the Tresham family.  There is a great deal more symbolism using the number three throughout, and the whole building is a fascinating example of the Elizabethan love of allegory.  Pevsner, the renowned architectural historian, thought it so important that it was chosen for the front cover of the first edition of his local guide.  You can find details of how to visit Rushton Triangular Lodge here. 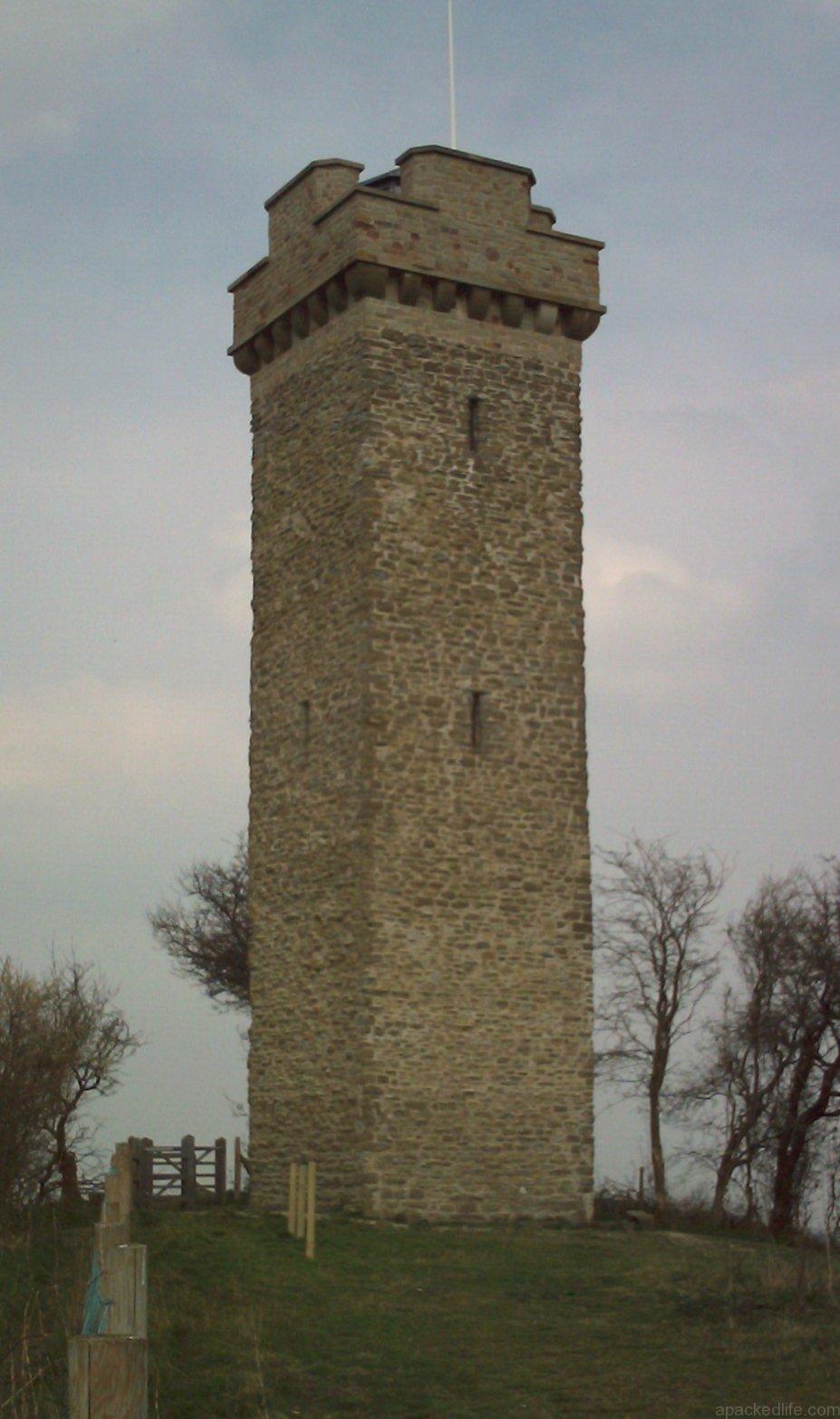 Perched on Callow Hill between the towns of Ludlow and Craven Arms in Shropshire, you’ll find Flounders’ Folly.  At 80 feet tall, you can clearly see it from the A49 that links Shrewsbury and Hereford.  This is walking country, and you’ll find the folly mentioned in many walking guides to Wenlock Edge.

The tower dates from 1838, and was erected by Benjamin Flounders to mark the boundaries between four large estates, or possibly to commemorate his 70th birthday.  After his death, it slowly fell into disrepair, and the castellated top collapsed in the 1980s.  Ownership of the Tower changed hands several times – including the actress Julie Christie – and it was eventually bought by what is now the Flounders Folly Trust.  It was reopened and can now be visited at least once a month.  From the top you can see the Shropshire Hills, Wenlock Edge, the Long Mynd, Clee Hill, Mortimer Forest, the Brecon Beacons, the Black Mountains and the Malverns.  In short, many beautiful places can be spotted from its height.

Follies Over The Borders: The Dunmore Pineapple

It has to be said that the building of follies is not just an English whim.  Some spectacular follies can be found across the Scottish and Welsh borders.  In Scotland, you’ll find the glorious Dunmore Pineapple, described as the most bizarre building in Scotland.  In truth, the building at Dunmore Park near Airth, Stirlingshire, is a celebration of one of the products grown in the hothouse formerly sited on its ground floor.  Where we now see stucco, there was once an expanse of glass.  Pineapples grew within the giant pineapple that contained them.  What a superb idea! 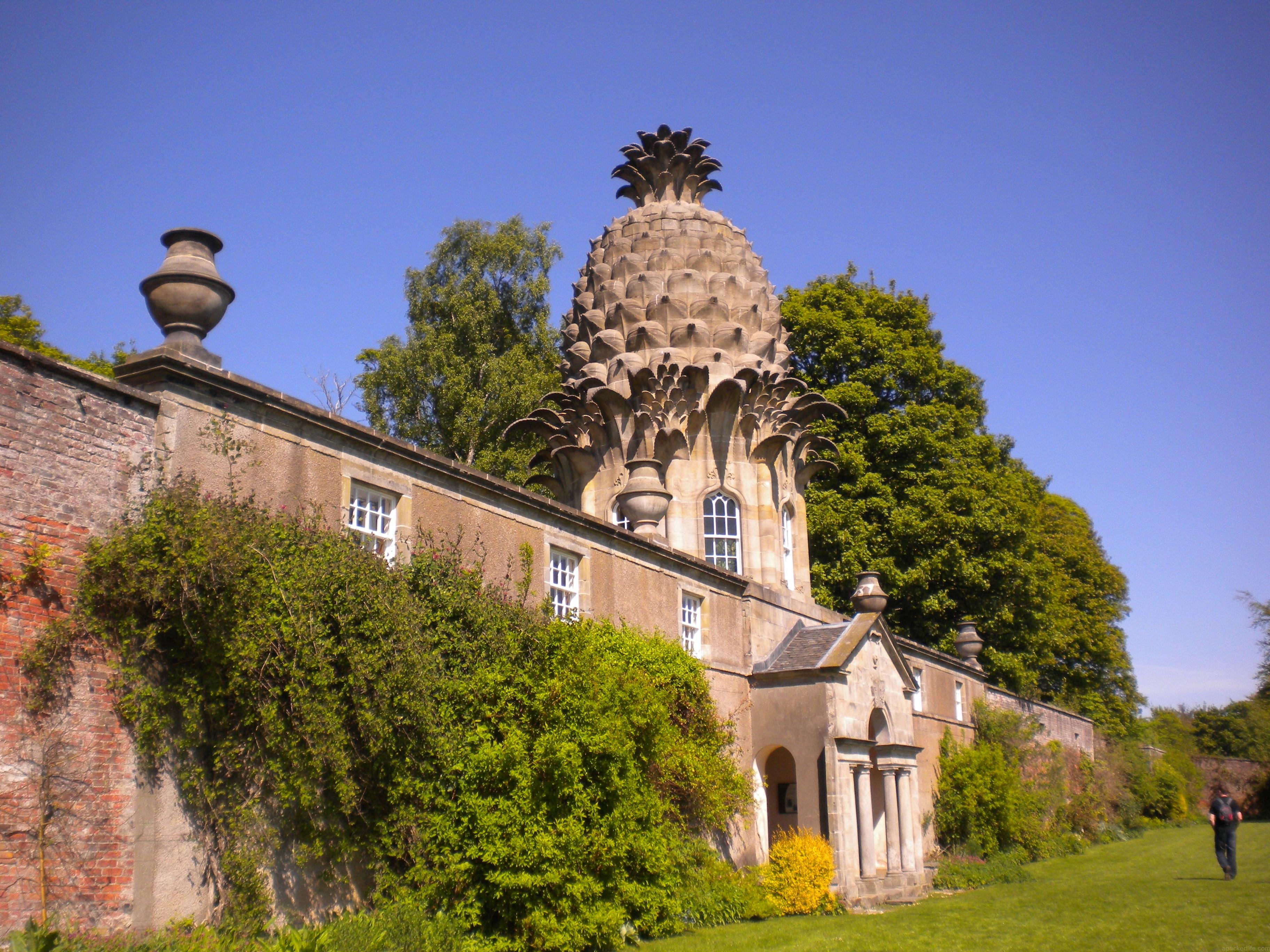 The Pineapple is now owned by the Landmark Trust, and you can rent it as your accommodation for a visit to the area.    I absolutely loved the comment of a previous guest: “Hooray for The Pineapple, prickly and proud”.  If that was you, I doff my cap.  You entirely get this folly thing.

A Village of Follies: Portmeirion, Wales

It has to be said that if you really want to see the concept taken to extreme, then we need to head across the border to Wales.  Here you get not just a building but a whole town full of follies.  Welcome to Portmeirion, immortalised in the 1960s cult TV series The Prisoner. 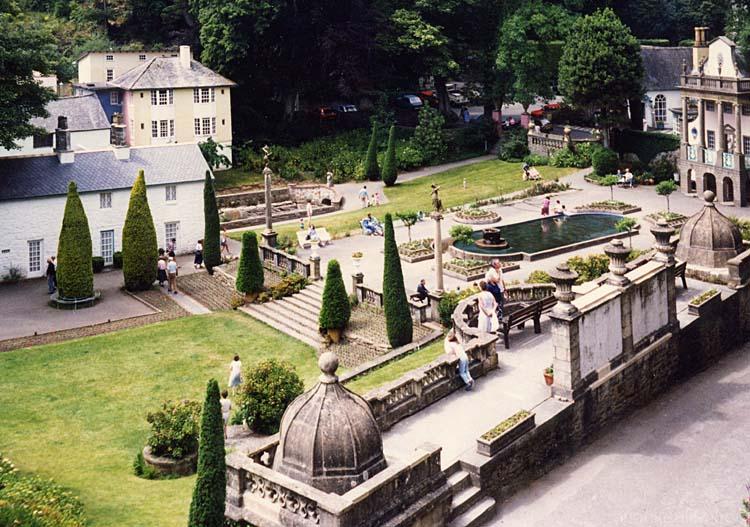 Portmeirion is in Gwynedd, North Wales, near Porthmadog, and was designed and built by Sir Clough Williams-Ellis in the style of an Italian village.  It took 50 years to create.  There is some dispute as to whether it was modeled on Portofino, although the inspiration was acknowledged to be Mediterranean.  The site is run as a hotel.  Various buildings are used as rental cottages, shops, a cafe, a tea room and a restaurant.  Portmeirion served well to inspire Noel Coward to write a chunk of Blythe Spirit there.  Musician Jools Holland took it as a design inspiration for his home studio. There’s an annual convention here for fans of The Prisoner.

If I’ve persuaded you of the benefits of exploring England’s hidden travel treasures, then you’ll find more unique, unusual and beautiful spots to discover.  I’ve talked more about Faringdon and its delights in the Vale of White Horse, and you can find all kinds of other British destinations under the Britain tab to your right. 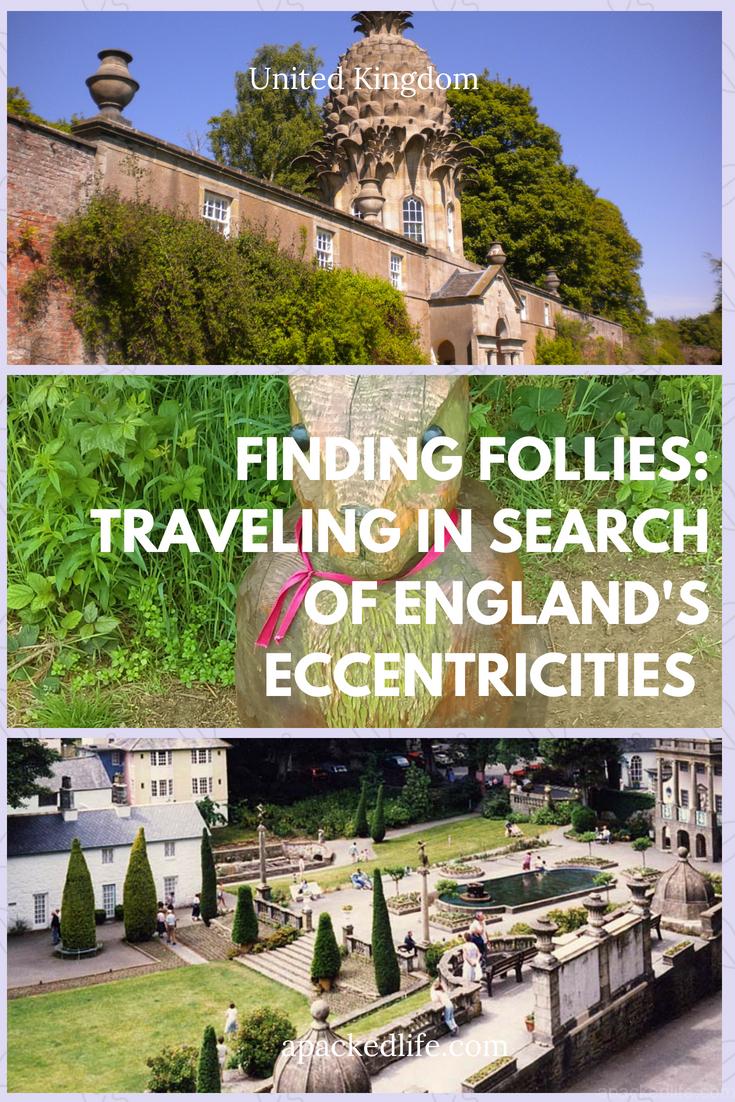 20 thoughts on “Finding Follies: Traveling In Search Of England’s Eccentricities”