The Belgian Coast is small but beautifully formed.  It’s much appreciated by Belgians and international visitors alike.  The coast stretches from De Panne near the French border up to Knokke-Heist near the Dutch border.  We’ve visited many spots along this little stretch of coastline.  This year, we got to know the area better by taking the Kusttram or coastal tram along the 42 miles (68 kilometers) of the coast.

Thinking of taking the Coastal Tram?  Why not pin this for later! 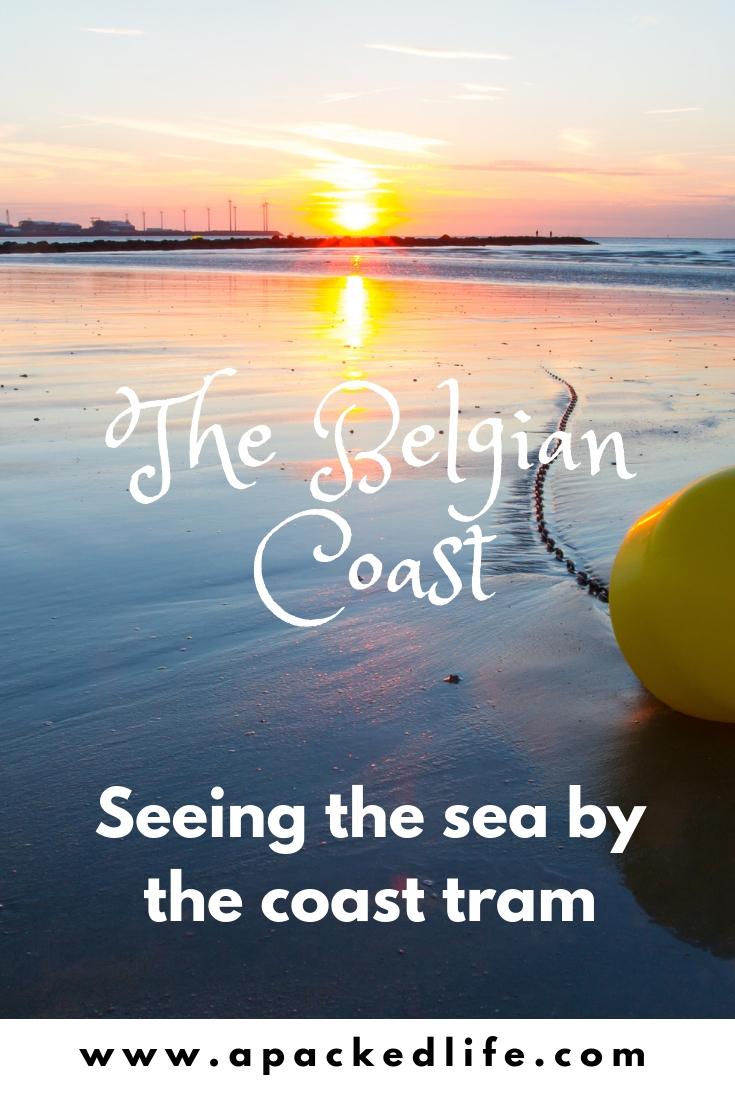 When we’ve been to the coast before, it’s normally been on an idle Sunday.  A wander along sands or seafront is the perfect way to pass a day at leisure.  If you take the train to the coast, you’ll find yourself in company with a whole lot of Belgians ready to take the sea air. We’ve seen the coastal towns in all moods of fair and foul weather.

Knokke-Heist is actually a collection of five towns to the northern end of the coast.  It is built on a polder at the edge of the Netherlands, and is known as one of Belgium’s more swanky resorts.  Head out to Knokke, and the train will drop you at the end of the long straight road to the sea.  There are direct InterCity Services here from Bruges, Ghent, Brussels, Leuven and Genk.

As you wander up towards the seafront, you’ll find plenty of fish restaurants and a few delis.  There are plenty of shops including some lovely boutiques which don’t require a platinum card to enter.  As you finally emerge onto the front itself, there’s a large and splendid beach club on the broad expanse of sands.   Look around, and you’ll see pretty much every form of pedalled conveyance known to humankind for hire, from bikes to beasts, to trikes and team cycles.

One fine day when we were heading back to Ghent from the station, there was a rather garbled announcement.  Our limited Flemish proved to be unequal to the challenge.  A few halting enquiries revealed that the train had been cancelled, involving a lengthy wait for its successor.  All around us, towels were spread out on the platform, picnics emerged, and a kind of Dejeuner Sur L’Herbe (or to be more precise on the concrete) began.  That explains a lot about what we love about the Belgians: their ability to make the best of any situation.

Knokke is a great place to spot art work with lots of sculptures on the beach and the breakwaters.  Keep your eyes open for the rabbit at the end of the boardwalk, the tap, and the two large orange men shaking hands. 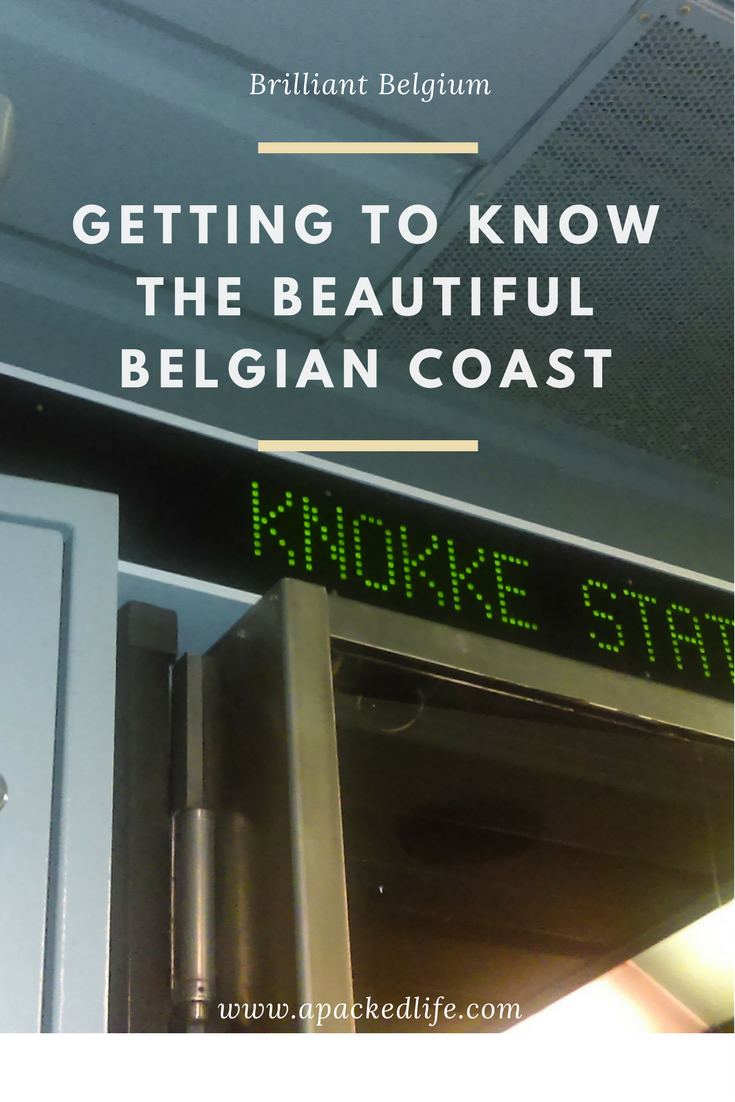 Like Knokke, Blankenberge is a pretty small town, with a population of some 30,000.  It too has a sandy beach, and a structure unique on the Belgian coast: its 1933 pier that extends 350m into the sea.  It’s such a significant feature that you’ll see it signposted as “Belgium Pier” from the town. 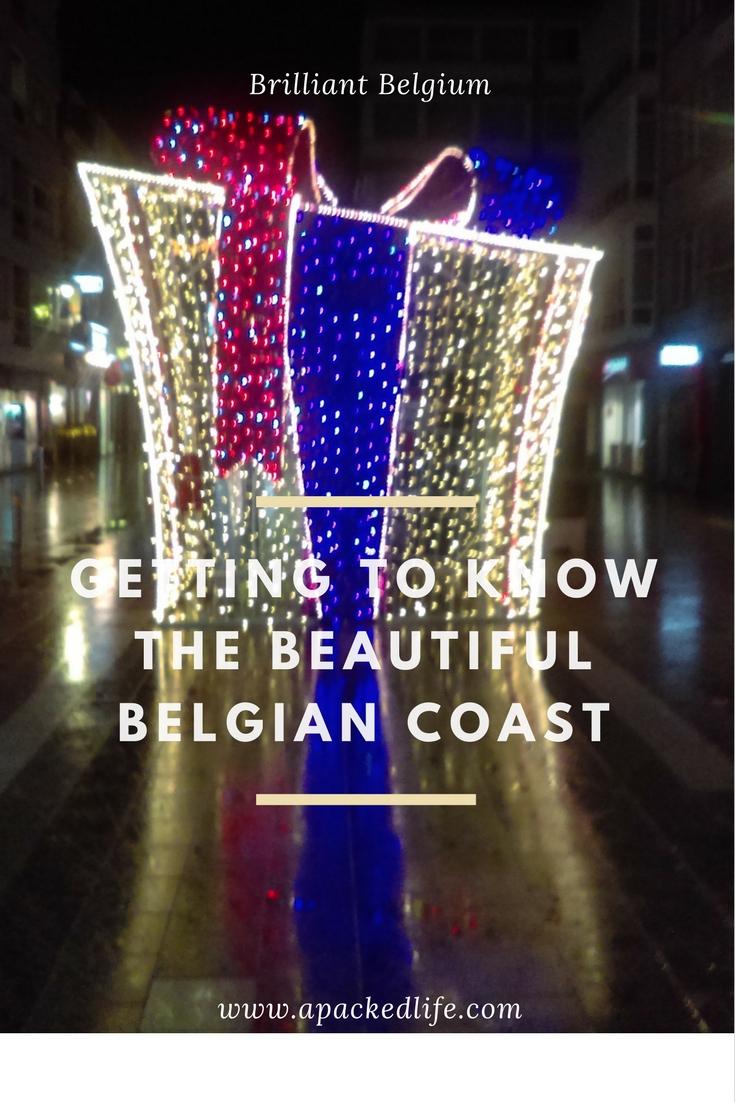 The town itself is a bit sneaky, hiding the coast behind an ascending flight of steps at the end of the main street.  You’ll find plenty of pretty Belgian architecture to enjoy here, including the ancient Town Hall.  Blankenberge is the closest coastal town to the seaport of Zeebrugge, which handles cargo, ferries and cruise ships.

Oostende is perhaps best known for its port, but it has much more to offer.  We’ve been there several times under different weather conditions.  There’s been sunshine enough to run on the beach like kids, and, despite sun protection, get a little bit pink.  Once we arrived in a winter gale so profoundly bracing that we made it as far as the nearest restaurant before catching the train home again.  We laughed to find that at the autumn funfair all the soft animal prizes were dressed in rain gear.  And now we’ve seen Oostende in her beautiful Christmas finery. 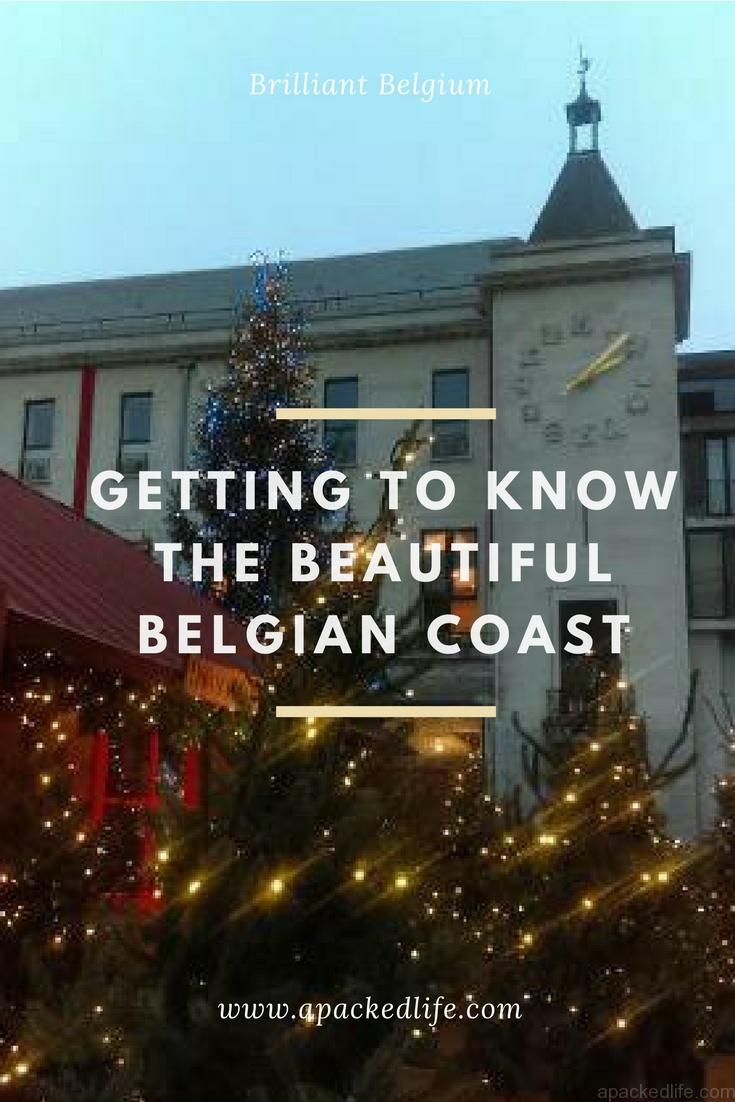 In Oostende, you’ll find a long row of fish restaurants, stretching from the station to the sea front.   Many days, you’ll also find a market of fish stalls stretching pretty much the same distance, offering you everything from battered fish through to small molluscs.  The port itself is fascinating, with all kinds of shipping.  Christmas saw a tall ship’s rigging silhouetted in lights.  In the town itself, you’ll find a large array of shops, a pretty astrological clock and plenty of wandering around to be had.

We stopped off here recently, for no other reason than we liked the name.  It’s actually a collection of 5 small coastal villages, with a broad sandy sea front.  The beach was sadly obscured by a dense sea fog when we visited.  It looks to be a beautiful place for a summer meander.  A lot of Middelkirke was understandably closed that day we stopped by in foggy December.  Not many villages have such cracking Christmas decorations as these though! 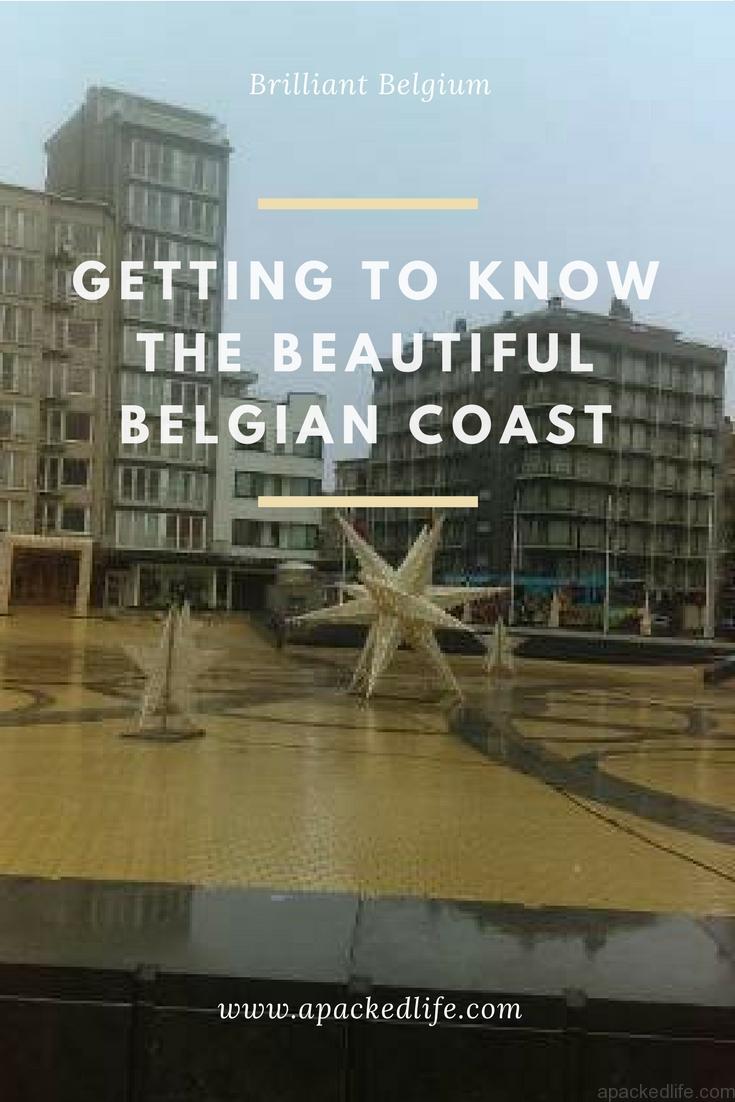 The Kusttam route was first brought into partial use in 1885.  It was then expanded to cover the whole 42 miles of coast from Knokke-Heist down to De Panne on the French border.  It’s actually the longest tram line in the world.

On the day we took the tram, it was pretty busy until about 6pm.  It was fascinating to see little vignettes of life played out: two men meeting an old acquaintance and reminiscing, a group of teen boys egging one another on, and a guide dog, who fell asleep during the lunchtime rush hour with my husband’s feet as a pillow.

It’s a brilliant and inexpensive way to see the coast, at 6 Euros for a day ticket.  I’m really looking forward to going back in the summer with a towel and a picnic.   I can become a beach hopper for the day.  You can buy your ticket on the tram (slightly more expensive) or at Press shops along the route. 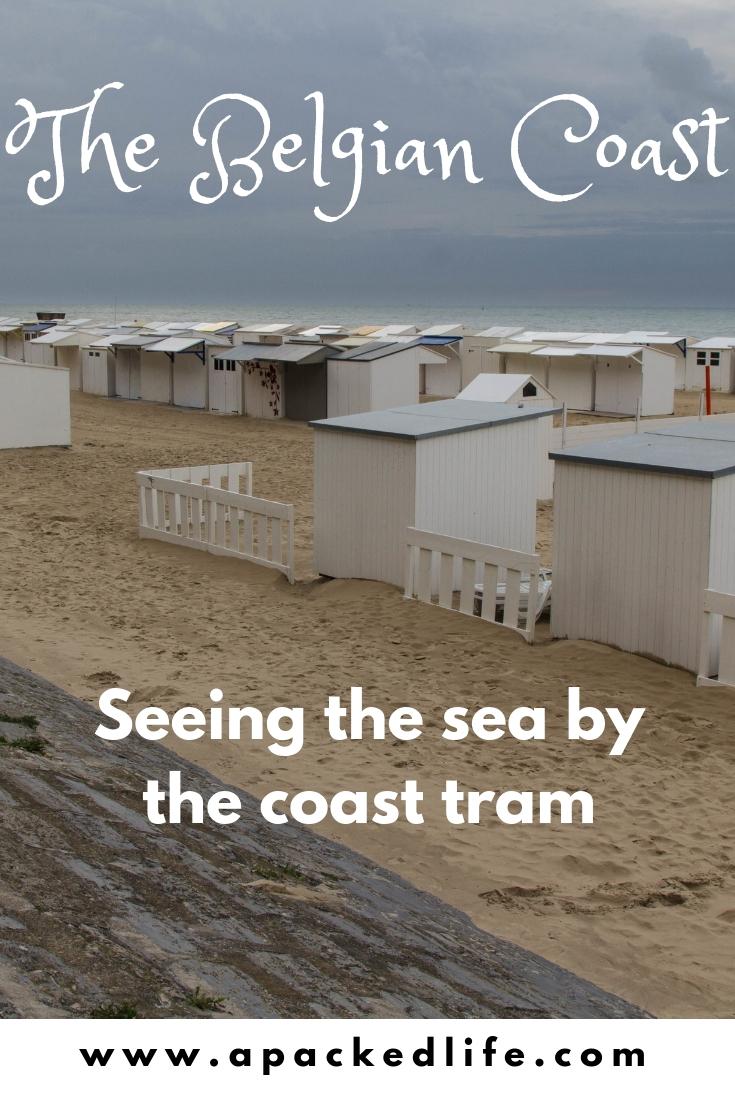 The Delights of Belgium: Further Reading

If you’d like to read more about brilliant Belgium, then you can read more about taking to the river in Ghent and the secret life of Brussels here.  More exploration of Brussels took place in the commune of Saint Gilles, famous for its art nouveau, and we also explored Brussels UNESCO World Heritage Site Grand Place.  We talk about taking the Eurostar to Brussels here.  You can also find us guest posting about more things to do in Ghent here. 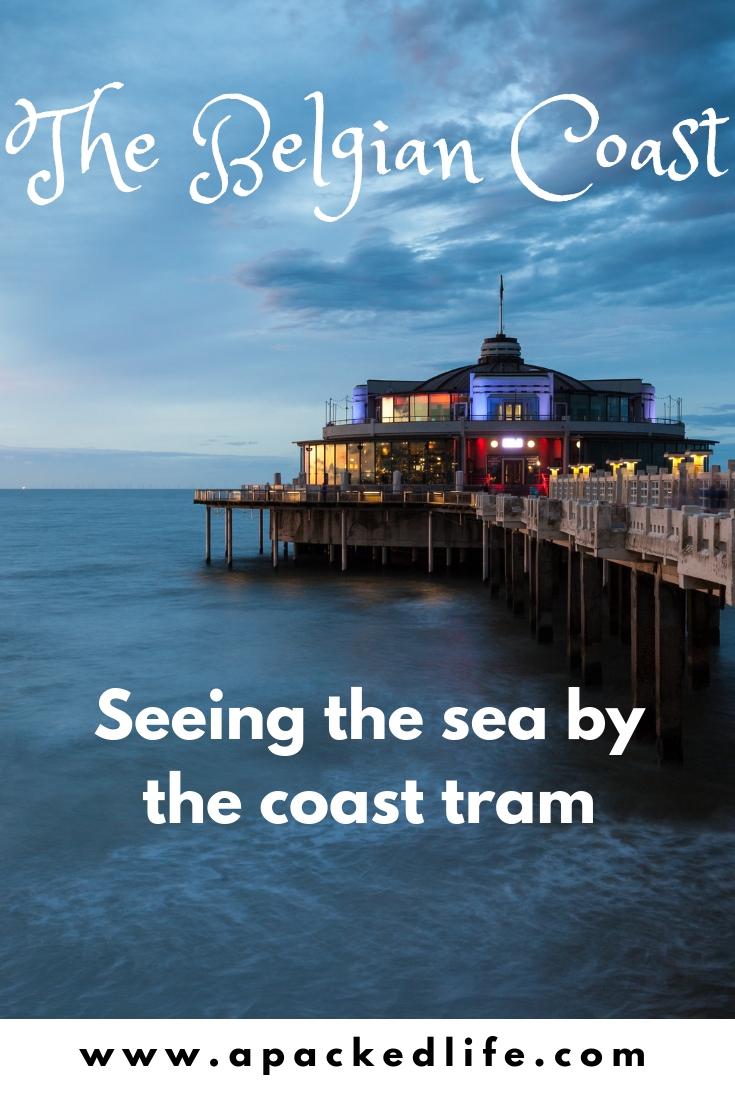 15 thoughts on “Getting To Know The Beautiful Belgian Coast”