The Yorkshire Dales is one of the UK’s fifteen National Parks.  Beautifully described as “Britain’s breathing spaces”, they punctuate our small island with oases in which to hike, meander, and simply appreciate the joy of being outside amidst beautiful scenery.  Over the years, I have been lucky enough to visit each of the National Parks, all of which have their own distinct beauty.  You’ll have to allow me a particular soft spot for Dartmoor, as I grew up on the very edge of it, with the National Park sign being beside our house.

The Yorkshire Dales forms part of the Pennines, covering an area laced with moors and river valleys.  This is walking country, full of spectacular scenery.  Just under 4 million people visited the Dales in 2017, wandering its pretty small towns and villages and enjoying the beauty of the landscape.  Here our our favourite things to see and do in the Yorkshire Dales. 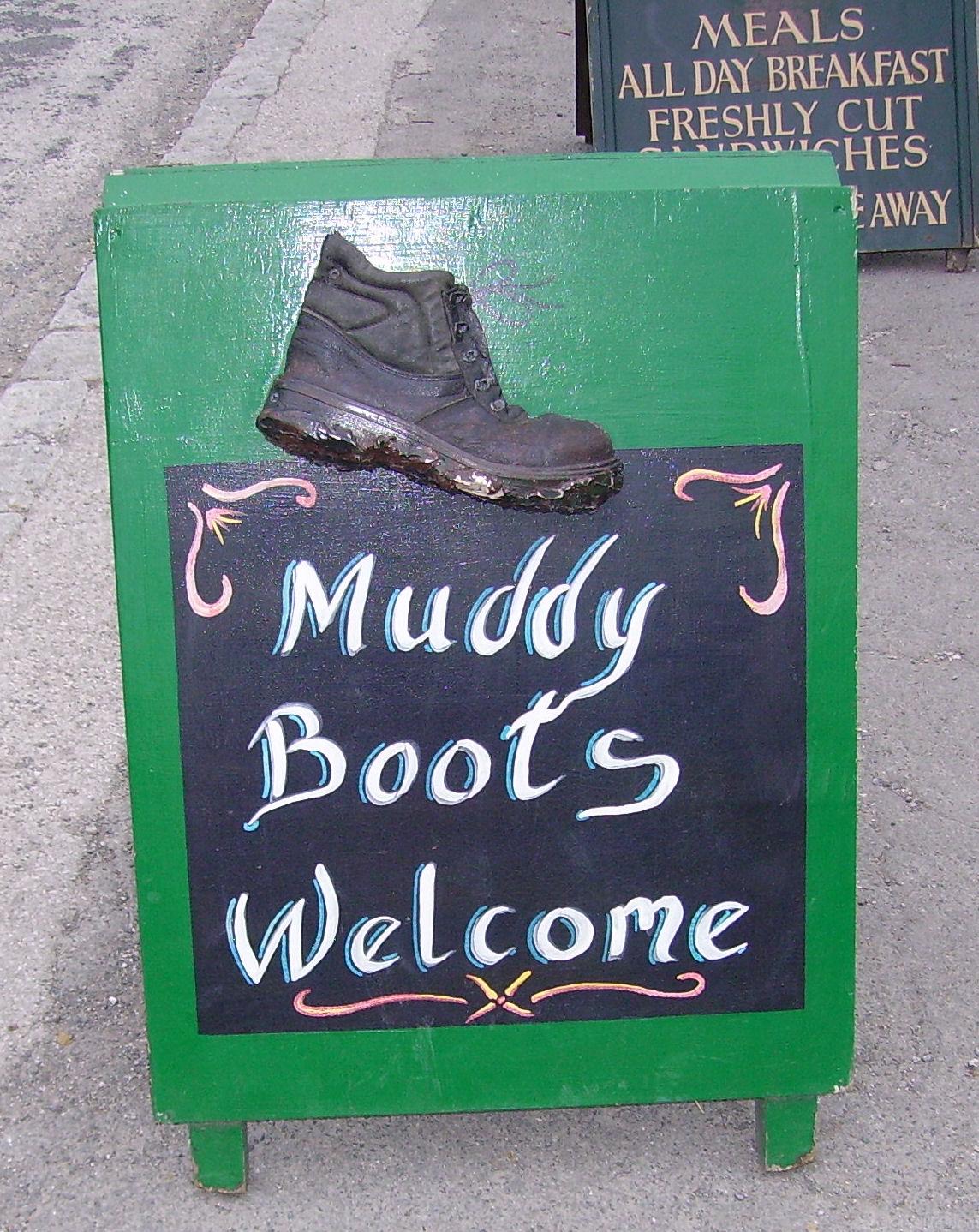 The Yorkshire Dales has many moods.

It’s the first sentence on the Dales’ own website.  That’s so very true, and what makes the place spectacular.  During our stay, we saw the Dales newly washed after a shower, under sunshine so brilliant that we could barely see when walking into it, and beneath heavy rumbling clouds and tempestuous rain.  Not only is that the English summer, but it’s also a chance to get a real feel of the sensory overload that is the Dales in all weathers.

Dale comes from the Norse word for valley, and there are certainly plenty of them.  This means too that there are many peaks, rising to over 2300 feet as moors or fells.  While we were driving the Dales, occasionally one of us would break away from gorging on the scenery to excitedly comment on the altitude reflected by the satnav.  It was the first time the car had been over 2,000 feet above sea level, and she, like us, was enjoying the experience.

If you’re planning a trip to the Yorkshire Dales, why not pin this for later. 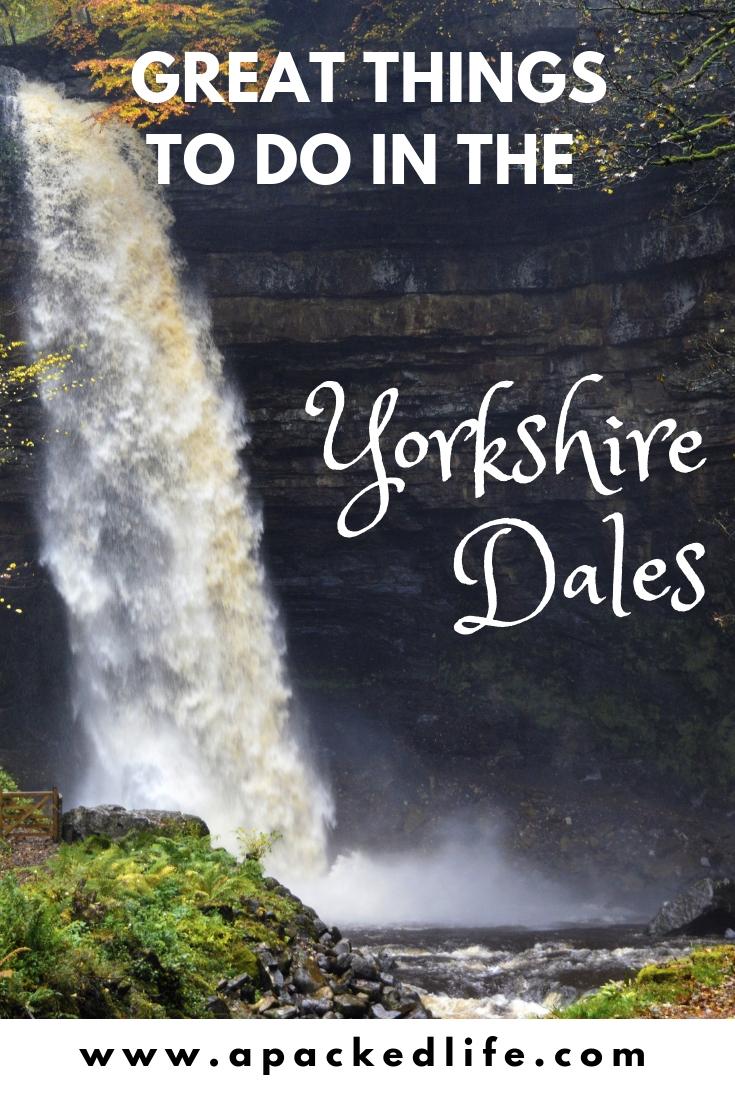 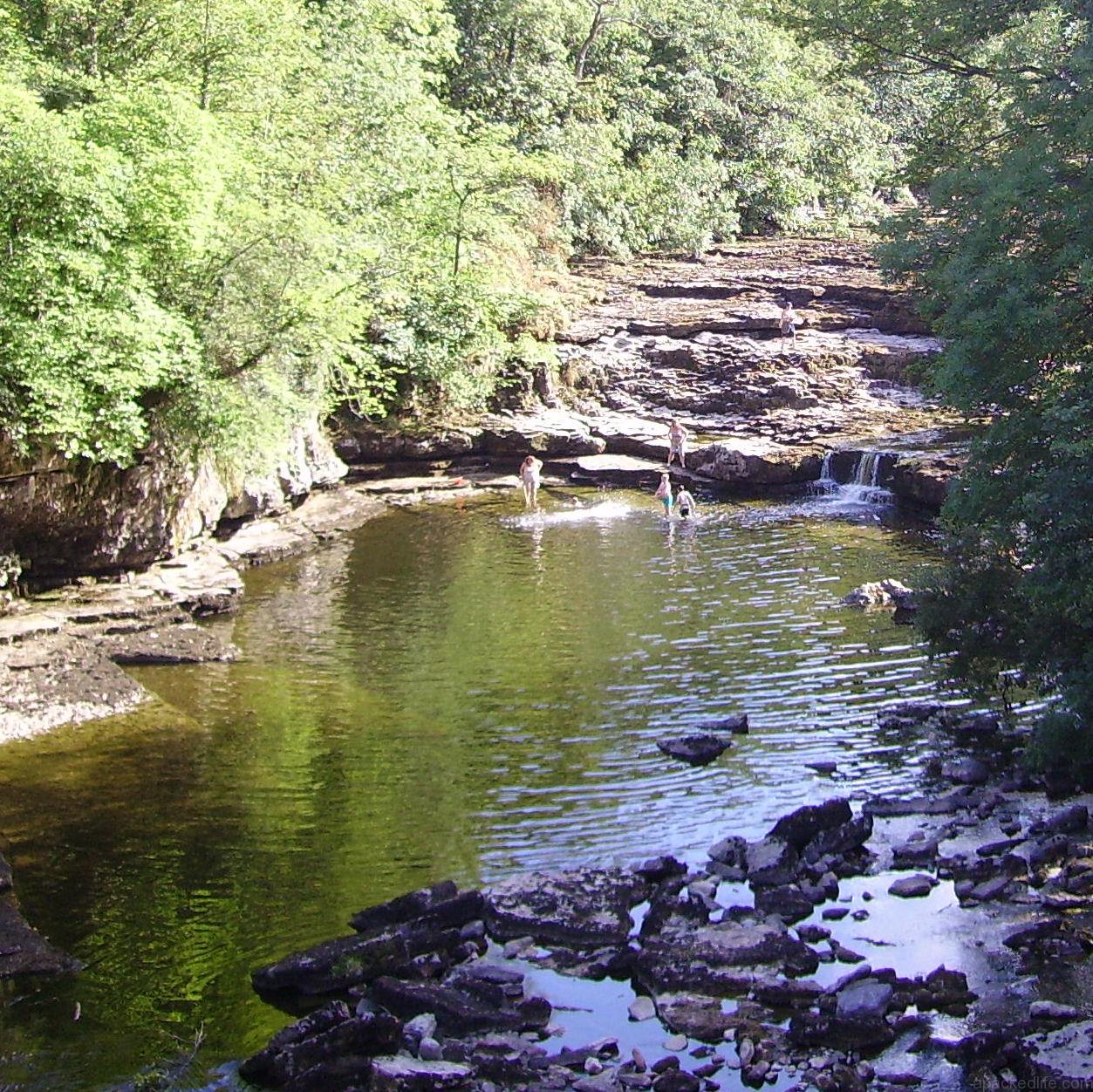 The craggy beauty of the Dales was formed by changes in sea level during prehistory.  The Great Scar Limestone came from shells and chemicals deposited on the floor of a shallow tropical sea, which blows the mind slightly when visiting on a wet and misty summer day.  Over millions of years (sorry, this is bringing out my latent archaeologist) these rocks were compressed and subject to metamorphosis.  The landscape we see now is a result of those processes. 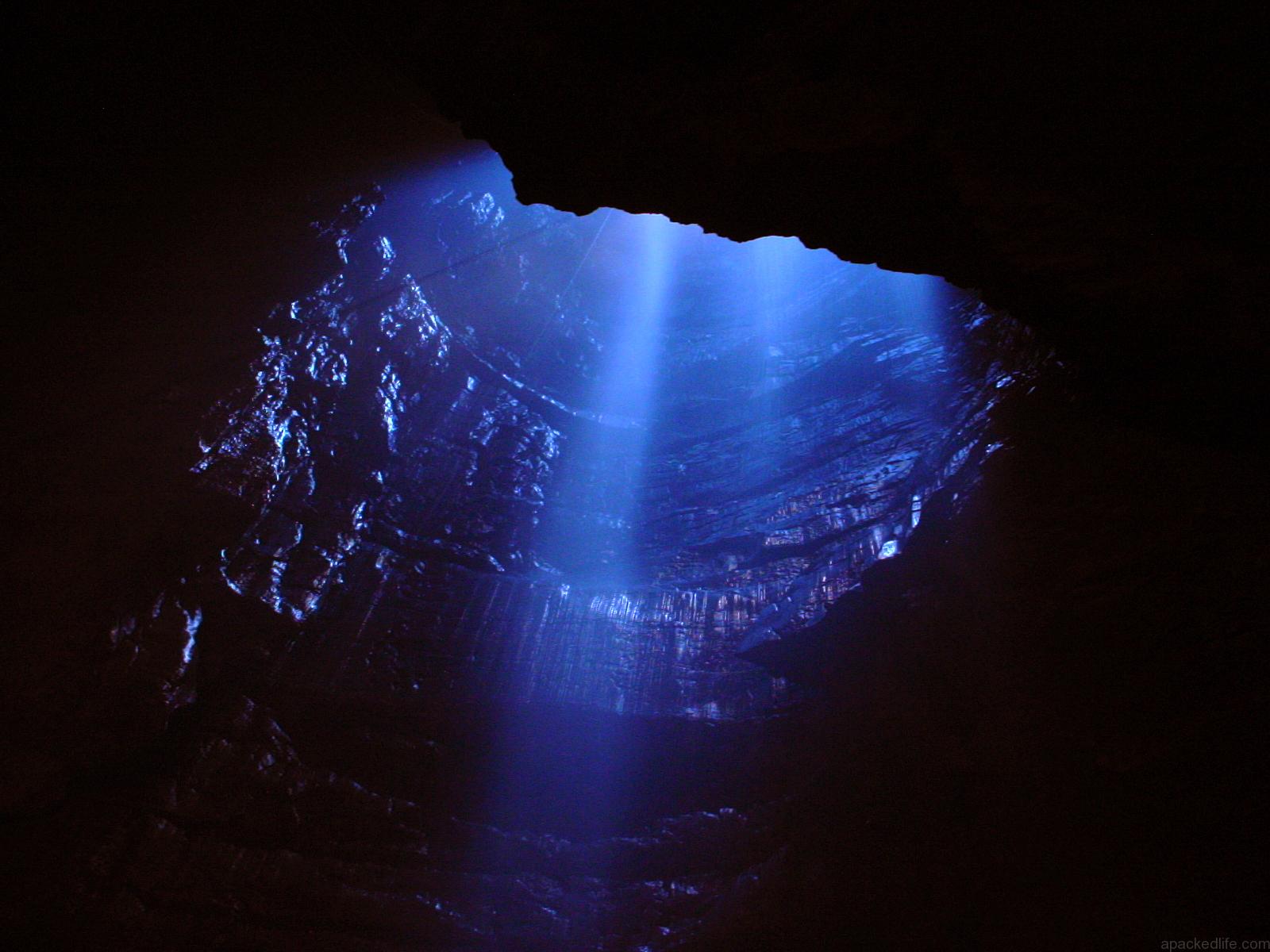 The Dales has a stark and beautiful landscape of outcrops of bare rock alongside the moors and fells.  These outcrops can be steep cliffs, known as scars, or limestone pavements.  Among the scars and pavements are streams and waterfalls, working over time to modify the landscape.  Water from the surface streams also disappears into sinkholes or swallow holes, the most famous of which is Gaping Gill.  Here Fell Beck disappears into a cavern off which are nine miles of cave systems.  Part of me was eager to try caving again.  The other part remembered the grittiness in my boots and the tightness of the cheese press in the cave system on Dartmoor, and decided my caving days might have passed.

Highlights of the dales 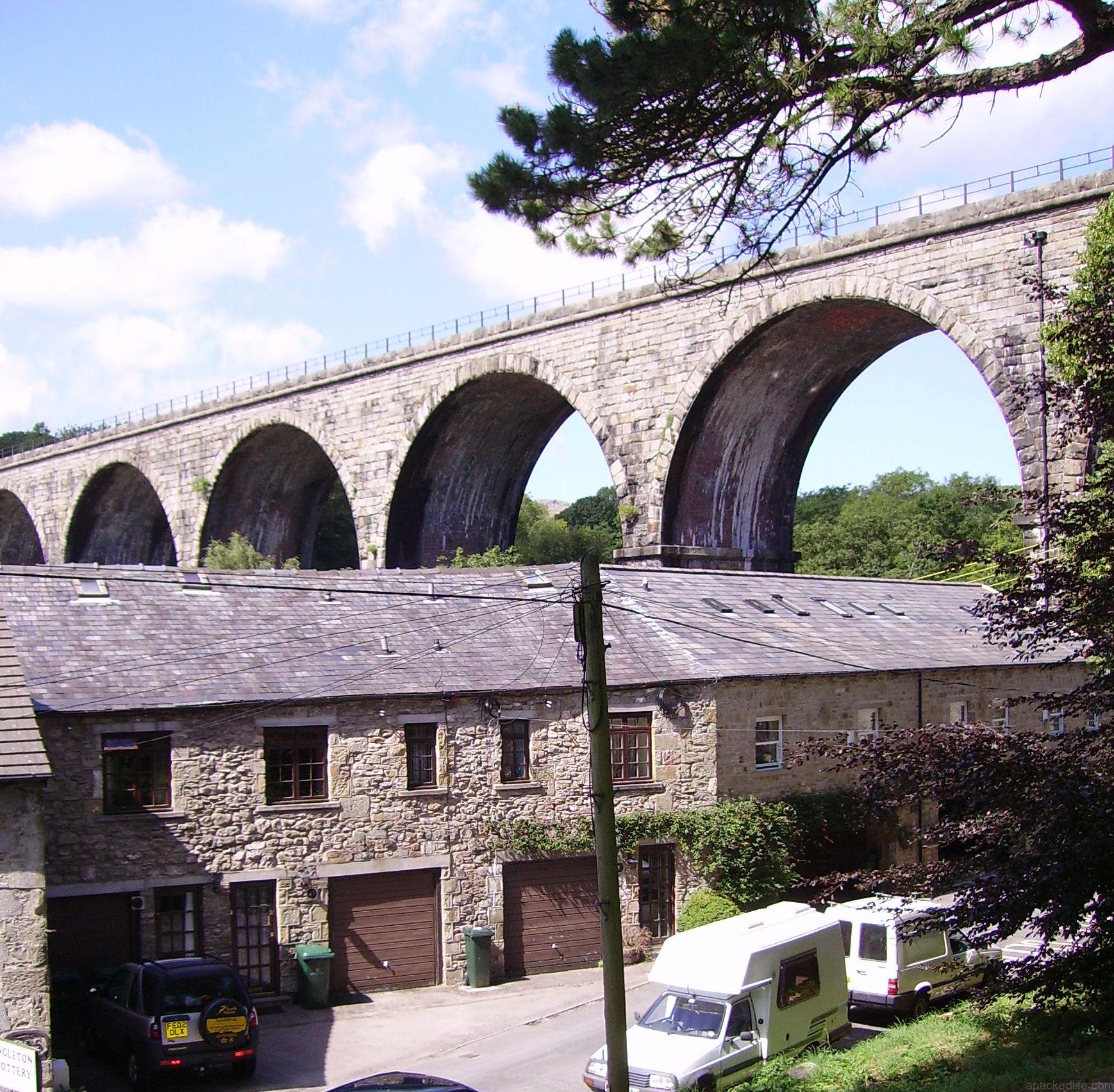 I could just claim that the whole trip was a highlight, and I would be happy to argue that one through with anyone telling me otherwise.  But in order not to keep you here for the week, I’ll focus on some of the places we stopped.  This was not a hiking trip, so although we clocked up a lot of steps, they weren’t focused so much on the fells and moors. 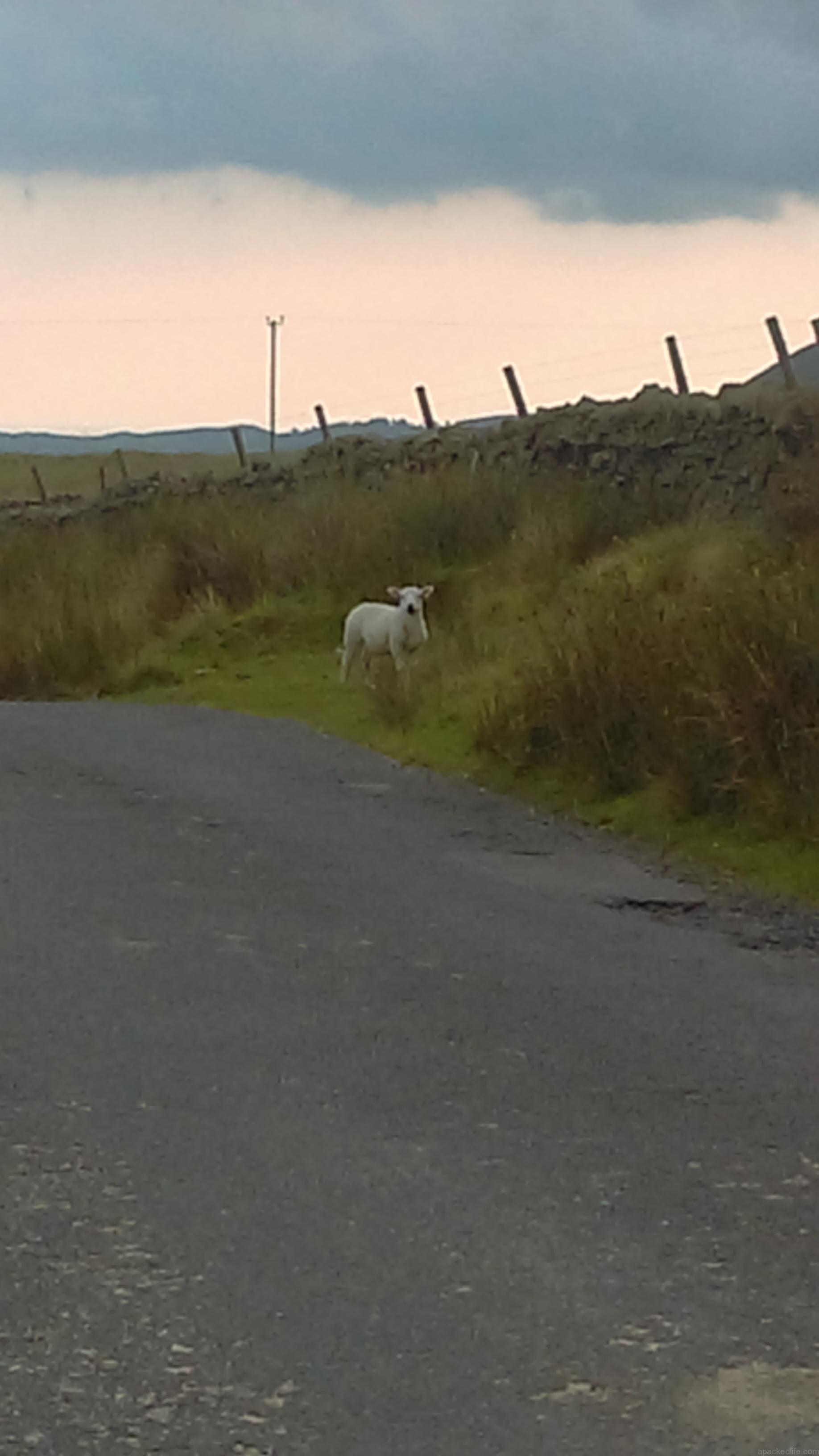 Sometimes it was just us and the locals

This is the south west edge of the Dales, covering Settle and Ingleton.  The north south route along the valley has been important for a very long time, as stone axe heads from the neolithic era were discovered here.  Some of the highest peaks in the Dales are here (altitude monitoring time!) and Ingleborough is believed to be a site for prehistoric rituals.

The valley is dominated by the beautiful Ribblehead Viaduct, which carries the Settle to Carlisle railway line more than 100 feet overhead using its 24 arches.  Its construction took four years beginning in 1870, and the structure has a Grade II listing.  We stopped to see it from below in some brooding clouds, then crossed it by rail a couple of days later in pouring rain.  It’s a wonderful piece of engineering, and a fine viewpoint. 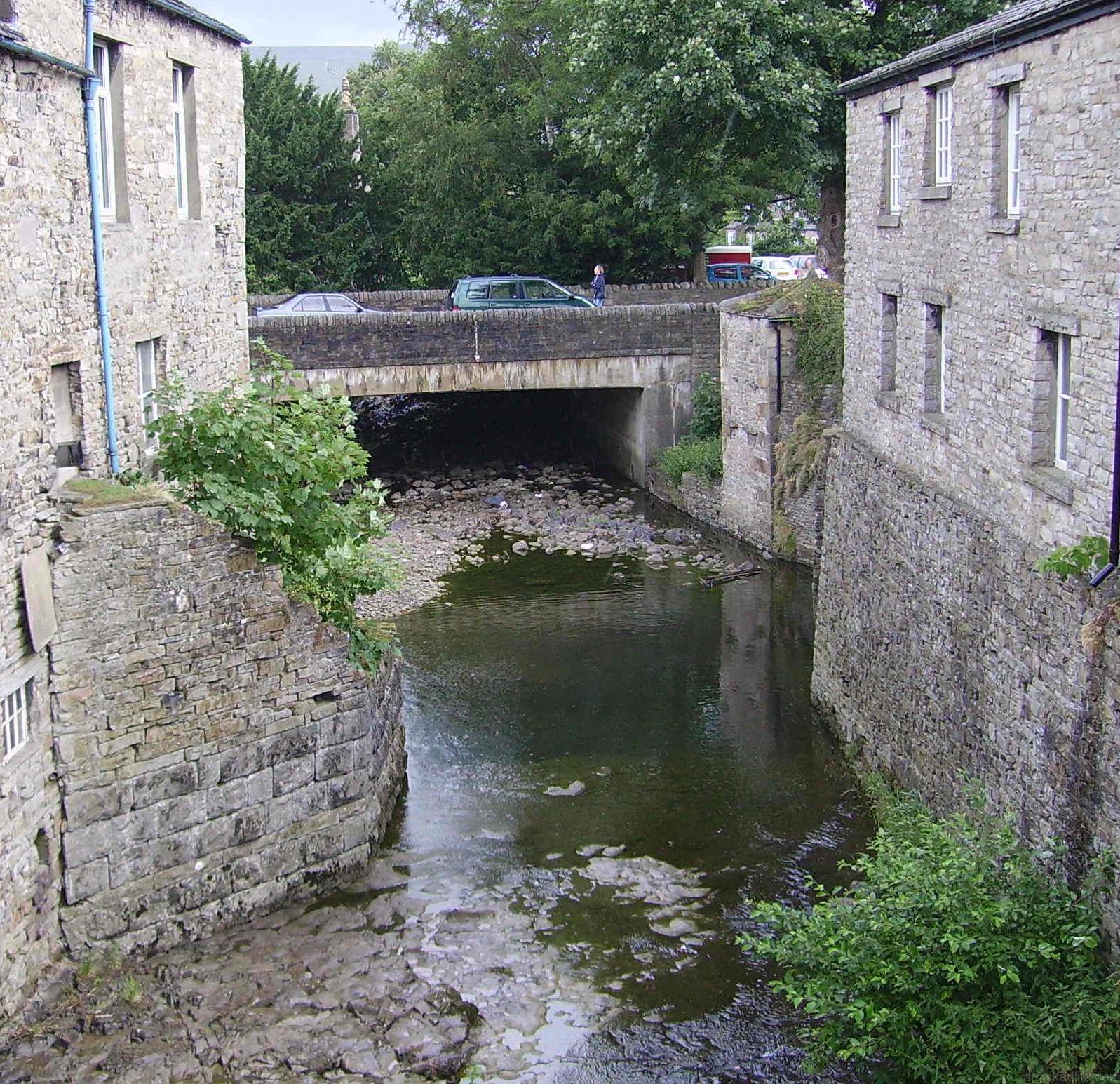 Beautiful Wensleydale is less craggy than Ribblesdale, and is also full of evidence of ancient settlement.  In the Bronze Age, a wealthy resident was able to make the offering of a bronze spearhead into Semerwater lake.  Good grazing led to cultivation of cattle and sheep by wealthy farmers.  And of course to the development of Wensleydale cheese.  This was a minor torture for me, as this is a wonderful cheese full of salty tang and I’m now dairy intolerant.  I’m sure the very smell pervaded the town of Hawes, where there is a cheese centre.  I spent much time sniffing the air, just breathing in that magnificent cheesiness.  (Actually, I’m sure that was entirely my wishful thinking, as Hawes smelled mainly of leaves after rain, a fine smell in its own right.) 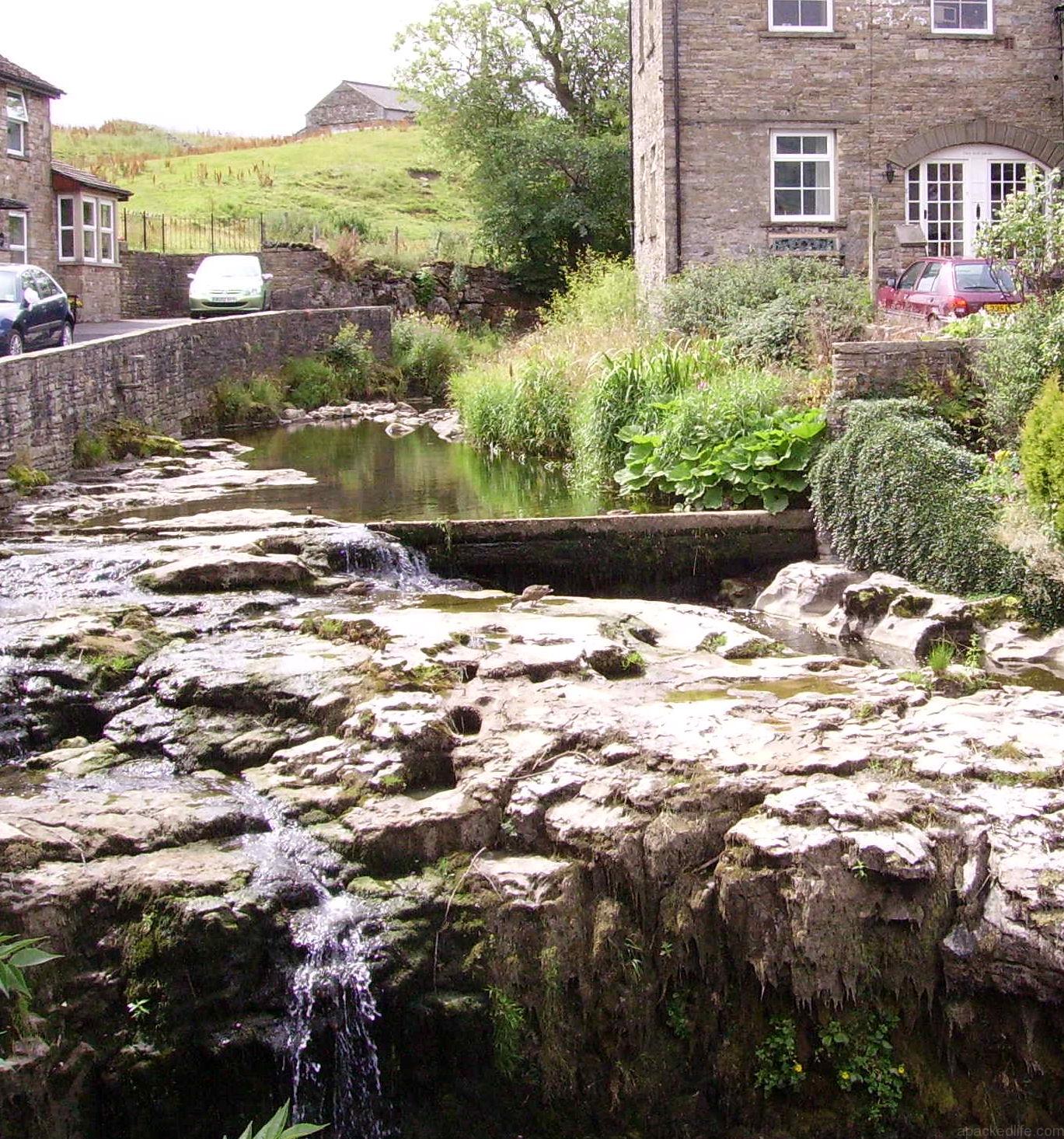 Hawes itself is mightily pretty, and you can actually get lovely views of the town itself and surrounding countryside from the car park, which rises above the main road.   In Hawes you’ll find plenty of places for eating and a couple for provisioning, including a mini-supermarket with a local food section.  There are lots of shops reflecting the area’s focus as a tourist destination, including what came to be known by us as the sheep shop (homewares with lots of sheep).  There was also the rock shop (reflecting the geological interest of the area).  You could spend a happy afternoon here browsing.

The Yorkshire Dales: Not Just in Yorkshire 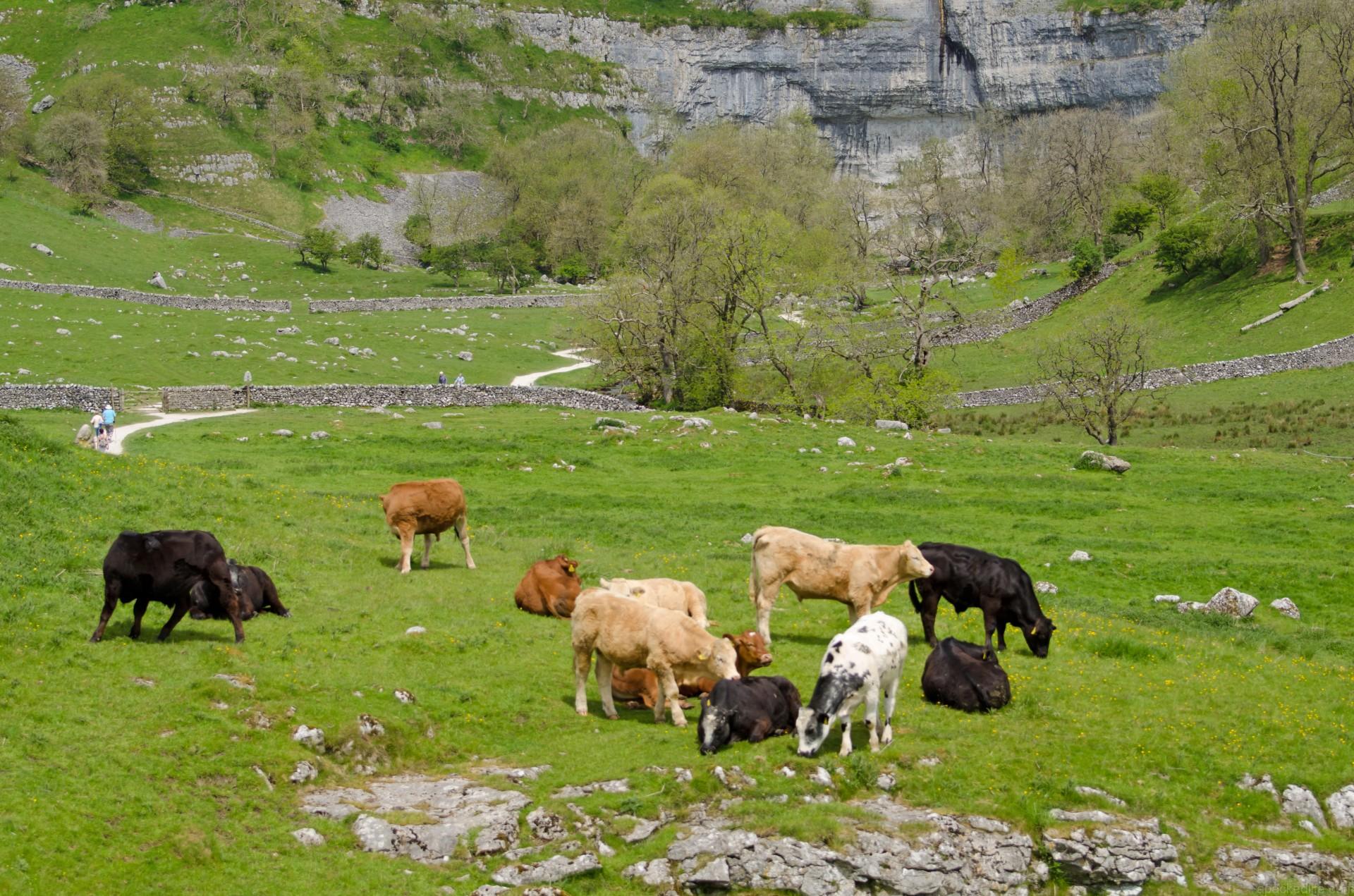 This came as a bit of a surprise to me too.  Part of Cumbria once belonged to the West Riding of Yorkshire, and this is the part that remains within the Yorkshire Dales National Park.  The landscape here is different, being formed of mudstone rather than limestone.  The harsh and wet winters of the Howgill Fells led to pastoral farming here.  Cattle spent only the warm summer months on the fells, coming back to the villages for the harsh winters.

As we drove across this part of Cumbria, we were amazed at how isolated the settlements are.  Reading afterwards about the area, it seems that access to the village of Dent was only feasible by packhorse for many centuries.  Even now, I’d imagine you’d be keeping a well stocked pantry for winter up on the fells.  You might even need your own generator, looking at the number of overhead power lines.

I warmed immediately to Sedbergh.  We drove in to a variety of buildings – the public school contrasting with some modern and practical housing – indicating that this was a place where people lived rather than tourists visited.  My initial happy impressions were reinforced by the large number of secondhand bookshops in town.  One was staffed by the loveliest of more mature volunteers who clearly had a work and social diary packed enough to put us to shame.  She was being visited by a wonderfully friendly dog, allowing me to get my dog-fussing quota in for the day.  And a top up selection of holiday reading.

Should you stop off in the town, I highly recommend you lunch at Smatt’s Duo cafe bistro.  Reasonable prices and a great menu (with lots of options for people with food allergies) were complemented by the general loveliness of the team there.  And the food itself was fab with lots of attention to detail.  The side salad, for example, came with great quality ingredients and a delicious dressing, rather than being an afterthought.  Even the loo was twinned with a loo being built in an African village. 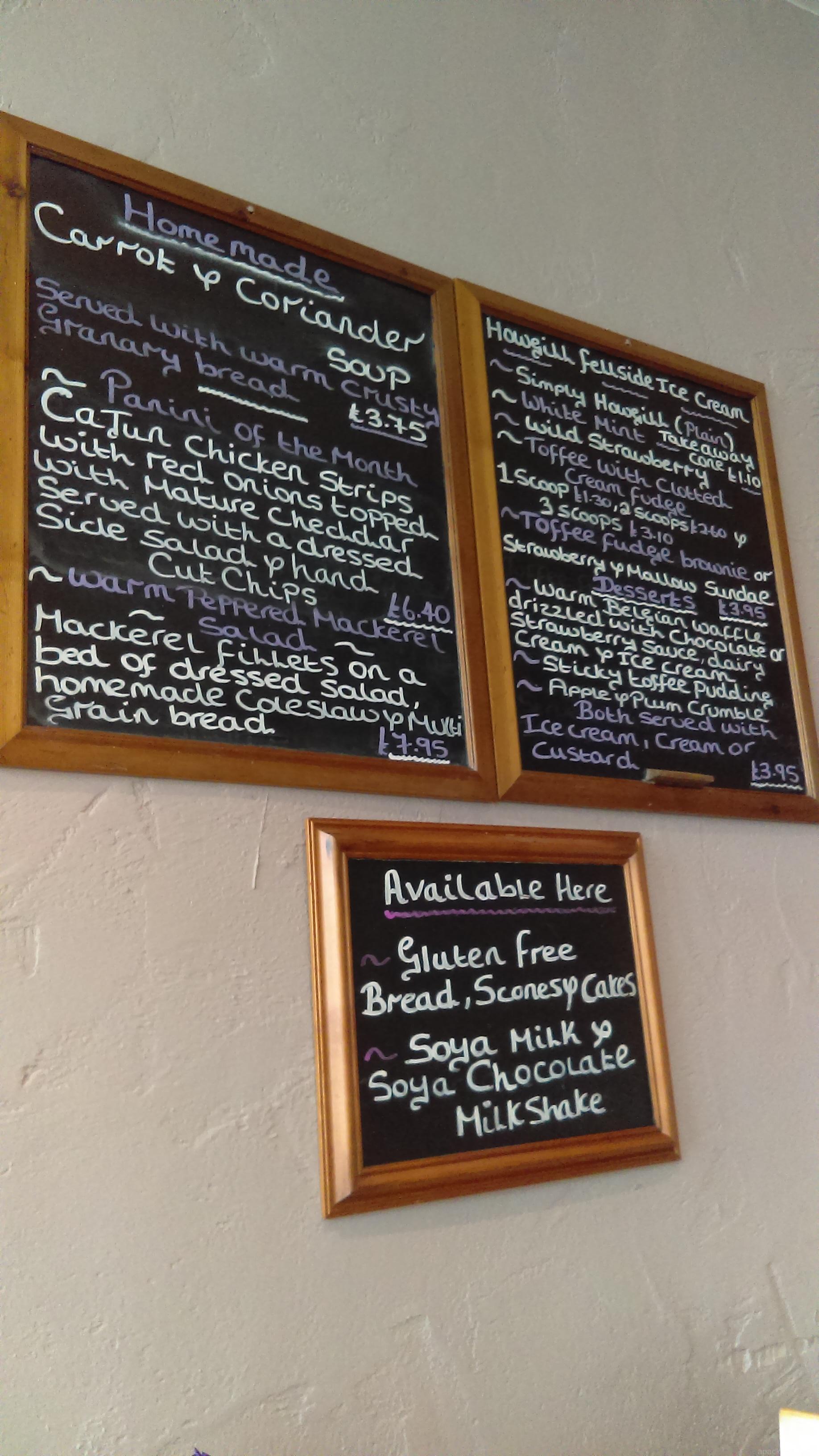 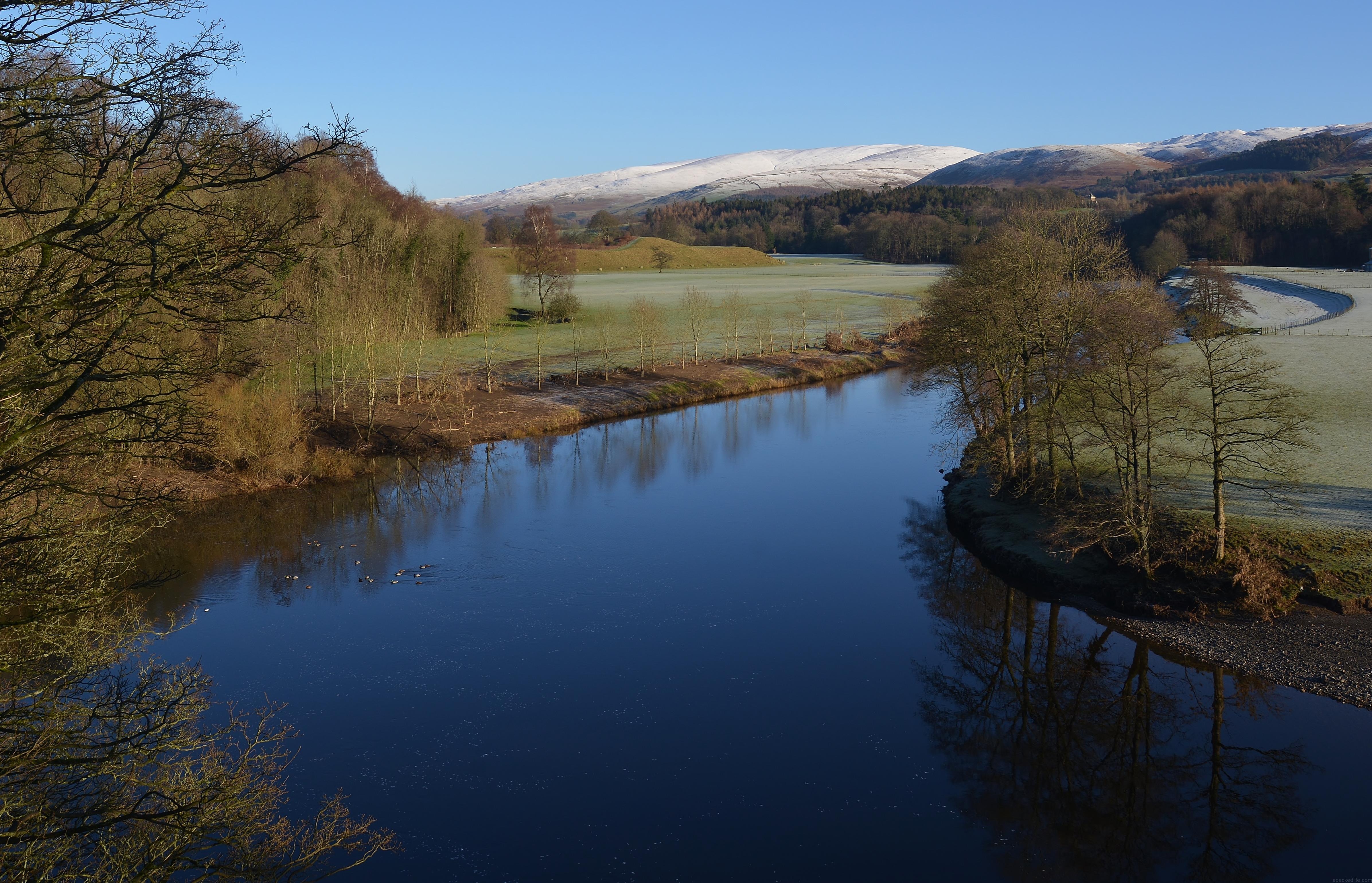 I rate John Ruskin.  This poet and key influencer of the Arts and Crafts movement described the above as “One of the loveliest views in England”.  Turner agreed, and made it the subject of one of his paintings.  This is what you can see of the River Lune from St Mary’s Church, and it’s certainly magnificent.  We found it difficult to drag ourselves away, watching dog walkers far below, and endorsing the wisdom of Ruskin.  Also in the town you’ll find a good range of independent shops and some lovely pubs. 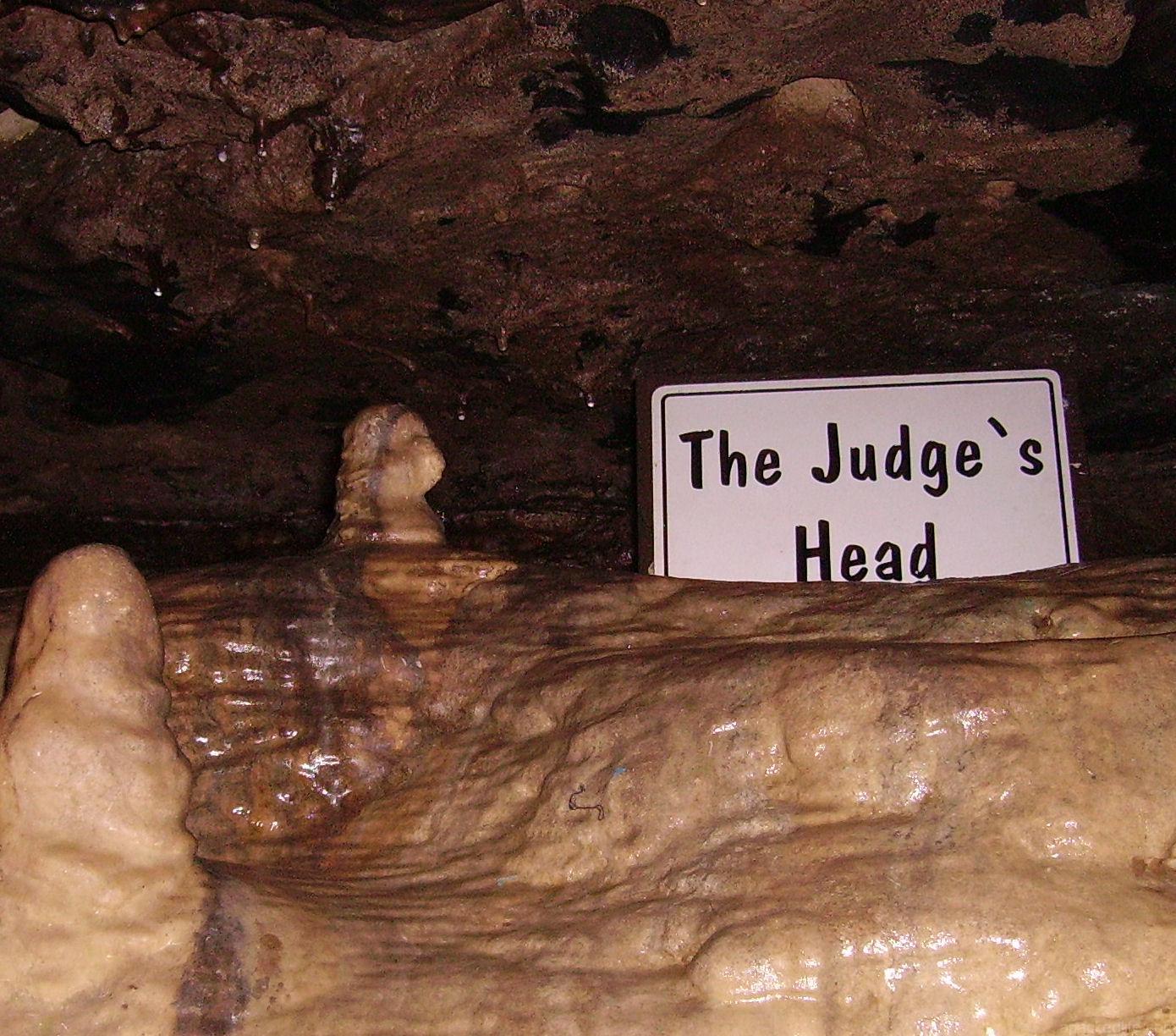 In addition to Gaping Gill, there are many more cave systems to explore in the area.  White Scar Cave is a show cave, accessible to the public, with an entrance (and cafe) near the Ribblehead Viaduct.  Here you can see a waterfall, the Witch’s Fingers and the stalagmite known as the Judge’s Head.

Waterfalls In The Dales 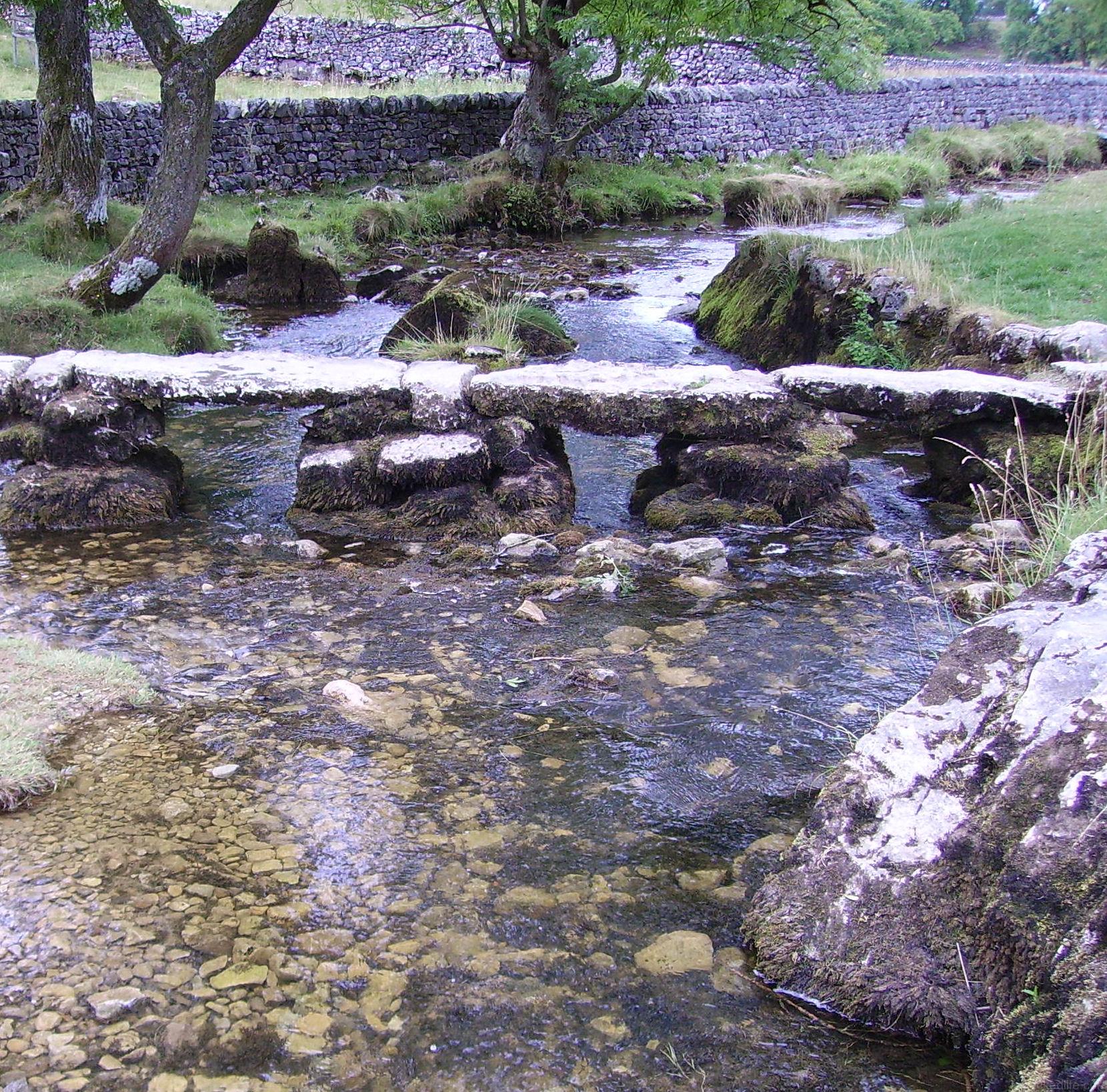 The limestone valleys of the Dales create some spectacular landscapes.  One of my favourite spots is the area around Malham, full of those limestone pavements, with beautiful rock formations too.  Here you’ll find Malham Tarn, a body of serene still water which is actually a glacial lake. 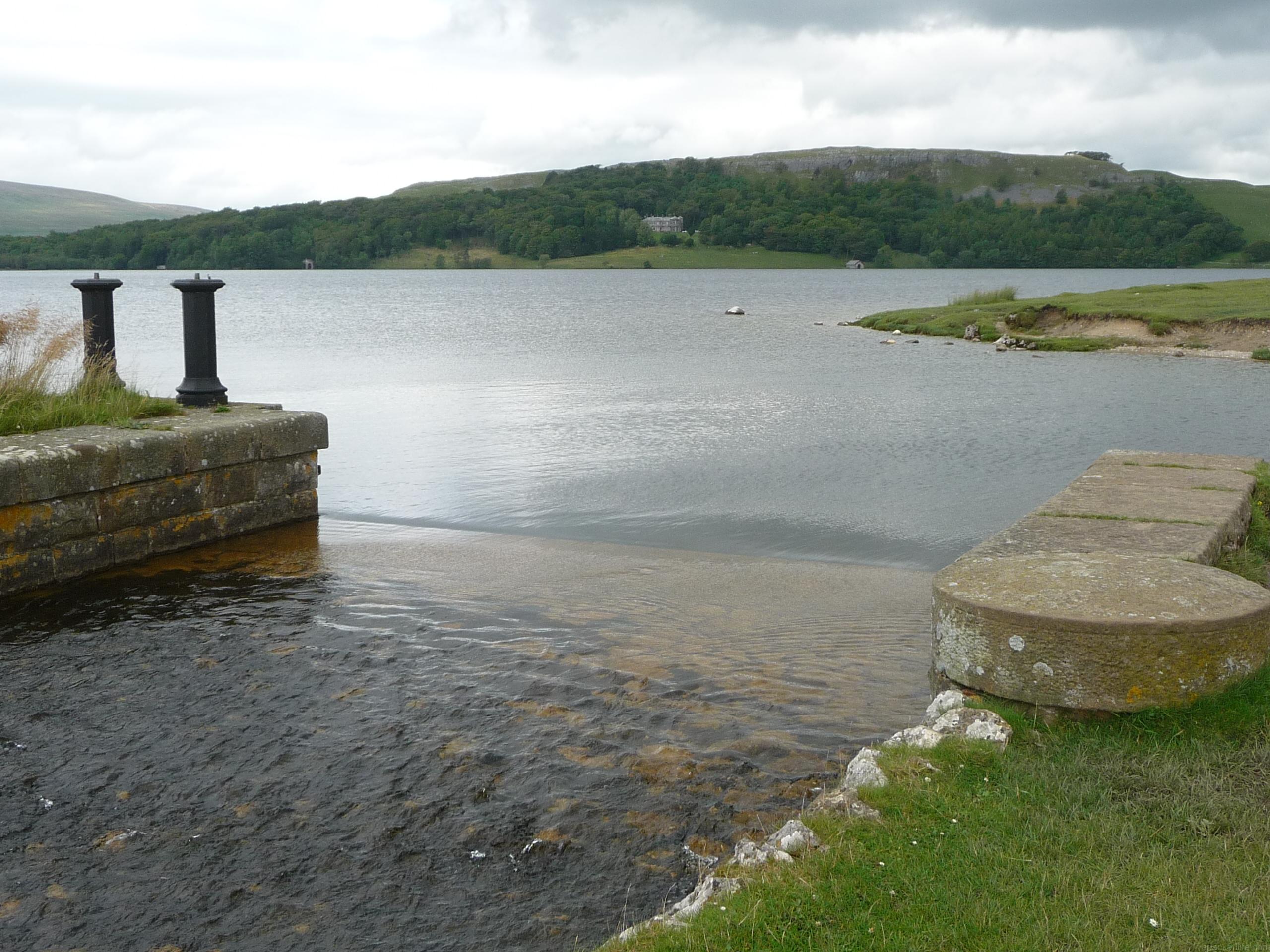 Malham Cove is a large limestone formation formed by waterfall action.  The ravine of Gordale Scar has two more waterfalls.  You can see the stunning Janet’s Foss, with a pool originally used to dip sheep.  Janet herself is professed to be a fairy queen who inhabited the cave at the rear of the falls. 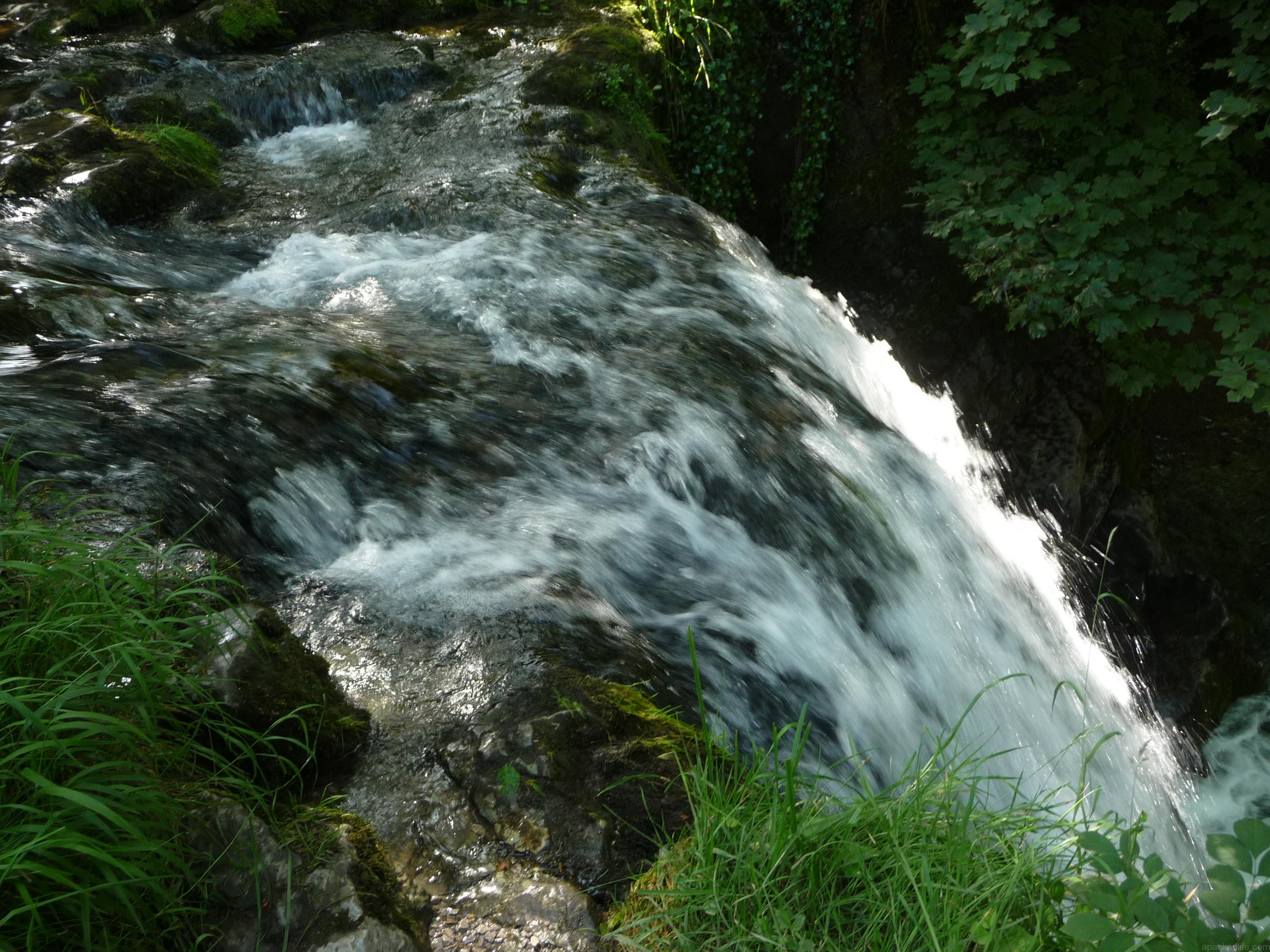 You can read more about the stunning falls in the area around Ingleton by taking the Ingleton Waterfalls Trail here. 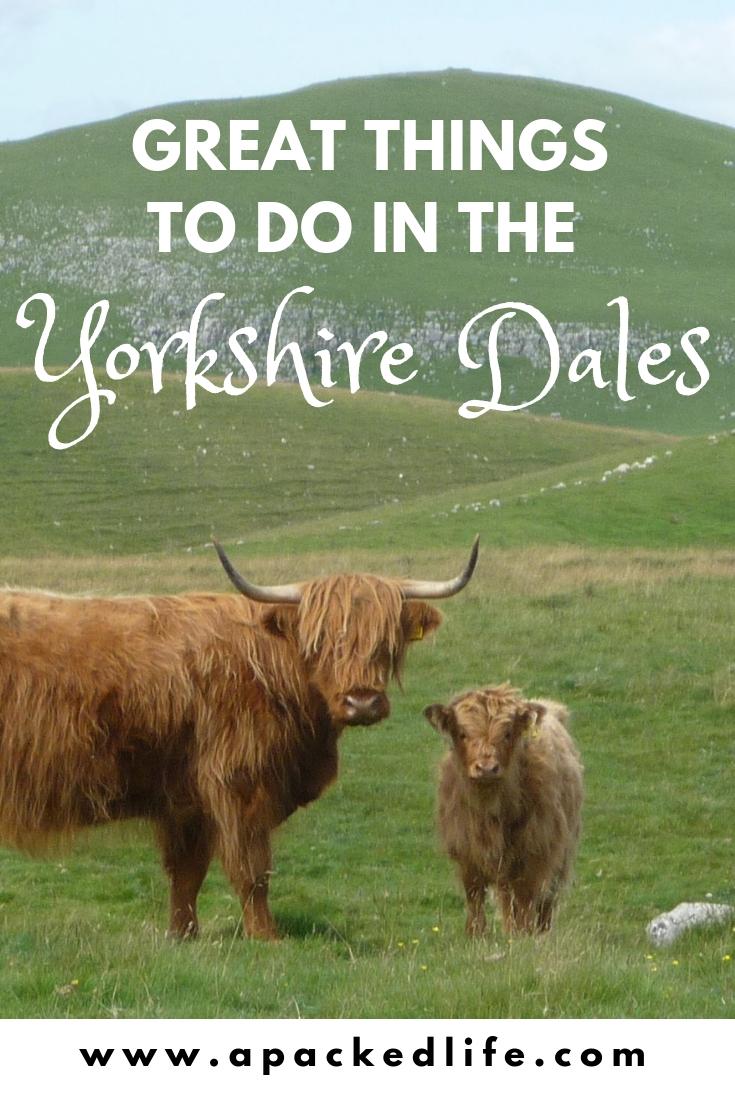 You can check out the Dales’ near neighbour by viewing 25 stunning places to visit in the Lake District here.  We’ve also got a collection of Essentially English Experiences, as selected by a group of fellow travel writers, where you’ll find more on the Yorkshire Dales.  I’ve shared my best secret spots for in an article on England’s hidden travel treasures.

If you enjoyed this, why not pin it for later! 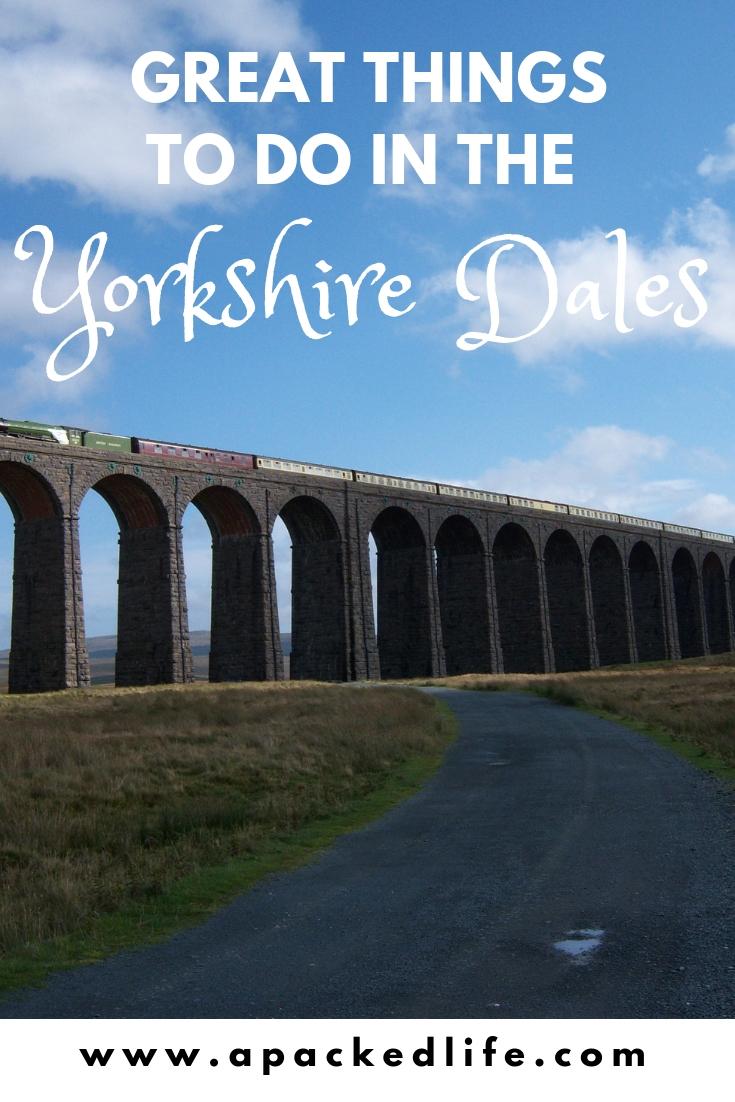