Historic Ludlow? Even if you’re a Brit, you may not yet have stumbled upon the charming historic town of Ludlow in Shropshire.  It dates back to the times of William the Conqueror, when a castle was built at the junction of the rivers Teme and Corve to defend the settlement from the Welsh.  Now the castle hosts an annual food festival, and the whole town is a renowned foodie destination.  Bring your appreciation of history and a large appetite, because we’re heading on in.

Ludlow’s not the biggest place, with a population of just over 10,000, but you’ll not be short of things to do and see.  The town itself is beautifully walkable, although it is hilly, so be aware.   The central market square (off which there is a car park) leads to the castle and on to narrow streets lined with interesting shops and beautiful houses.

First up, you might want to take a look at the castle itself.  Built by members of the de Lacy family, the castle commanded lands acquired through patronage and favour from William the Conqueror after 1066.  The stone for the castle was quarried nearby, and there is still quarry work atop nearby Clee Hill.  You have probably heard the tale of the murder of the Princes in the Tower of London.  What is less known is that they grew up in Ludlow Castle. 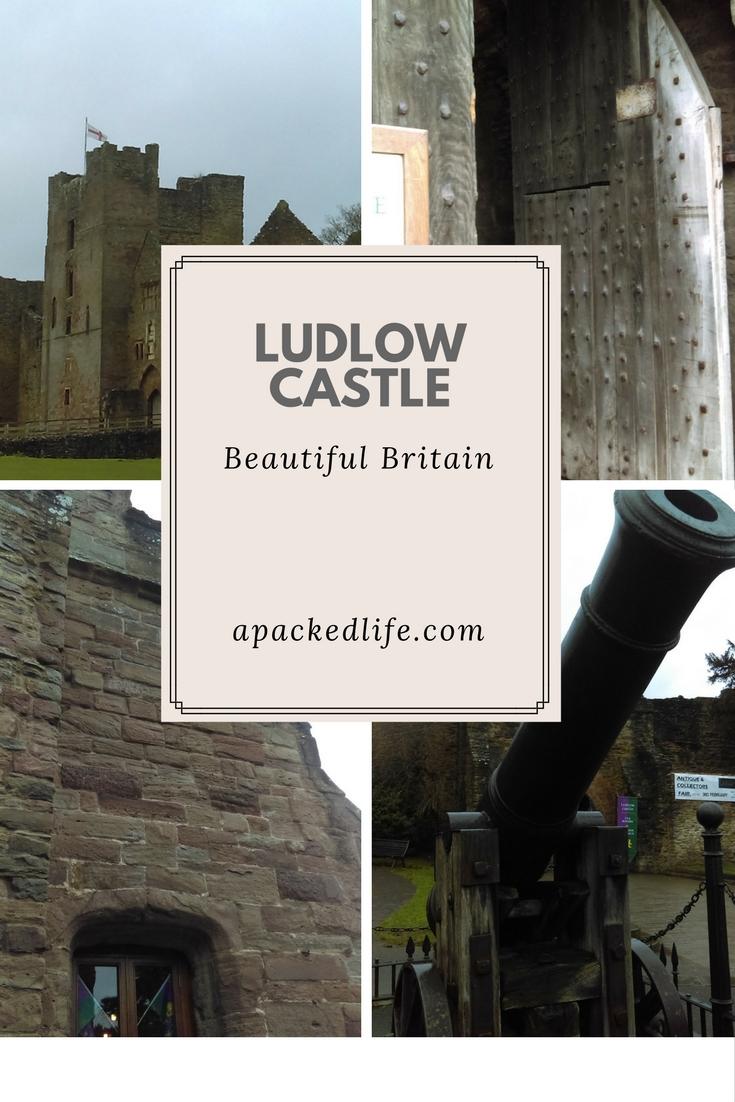 Historic Ludlow: Its Buildings and Market

A walk through Ludlow will give you some idea of the magnificence of its buildings.  There are plenty of timbered and half-timbered houses (including the Feathers Hotel) alongside contrasting Georgian architecture.  There are nearly 500 listed buildings in the town.

The town is laid out on a grid structure as it was planned under its Norman development.  This made Ludlow a fortified town within the castle walls, one of only a hundred or so similar towns in England and Wales.  Not only did this offer protection, but it also made it simpler to collect tolls for the market at the town gate. 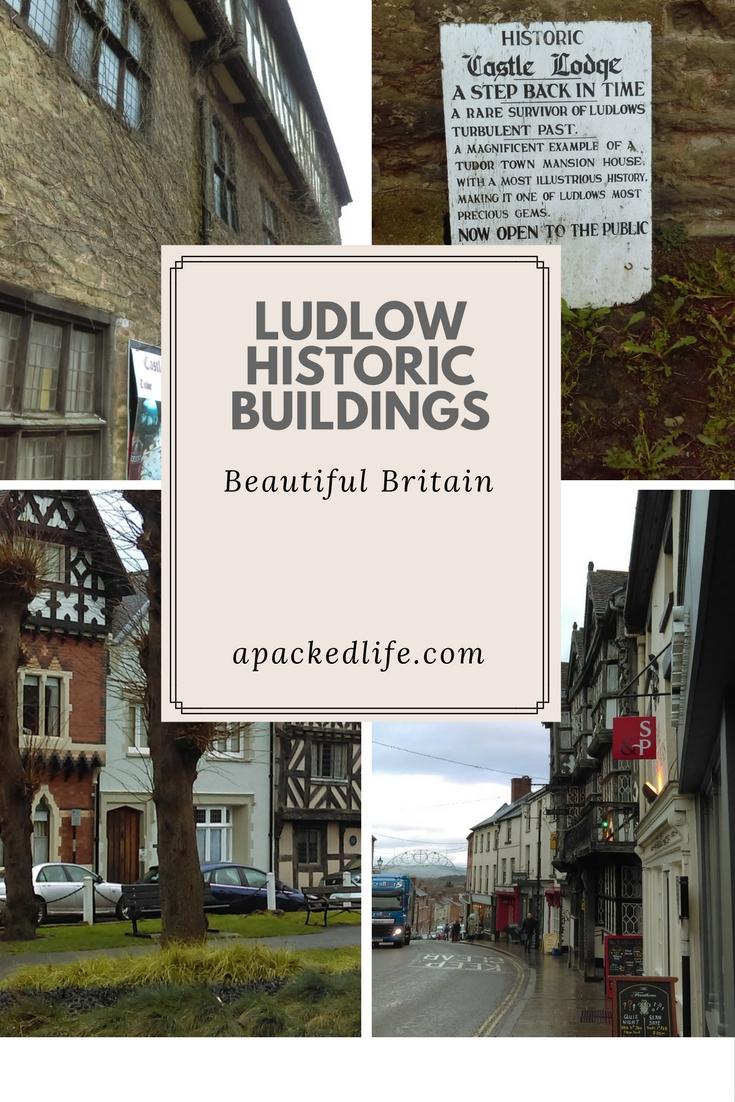 You’ll find the market square in the centre of town.  There is a market on Mondays, Wednesdays (summer), Fridays and Saturdays.  The second and fourth Thursday of the month hosts the Ludlow Local Produce Market.  There are also antique and flea markets every first and third Sunday of the month.  If you’re visiting on a market day, you might want to arrive reasonably early if you want to park easily in town.  The general market is full of interesting stalls, from cheese to pottery, jewellery to fish and fruit to furnishings.

Ludlow Museum, in the Buttercross at the heart of town, will tell you more about the town’s history.  And a fascinating history it is, with wealth built on wool and cloth.  St Laurence’s Parish Church in the town is a wool church, and also the largest church in the county of Shropshire.

So this is what you came for?  You’ll never be short of good food in Ludlow.  It is absolutely bursting with places to buy and enjoy gastronomic goodies.  Along with the frequent market, the town also has many speciality food stores, from butchers to delis, and bakeries to cheese specialists.  Everything is reasonably priced, locally made where possible, and we’ve never failed to return laden with bags of great produce.  Amongst our favourites are:

There’s lots more to choose from beyond this selection, and I don’t think we’ve ever had a bad shopping experience here.  Pack your coolbags. 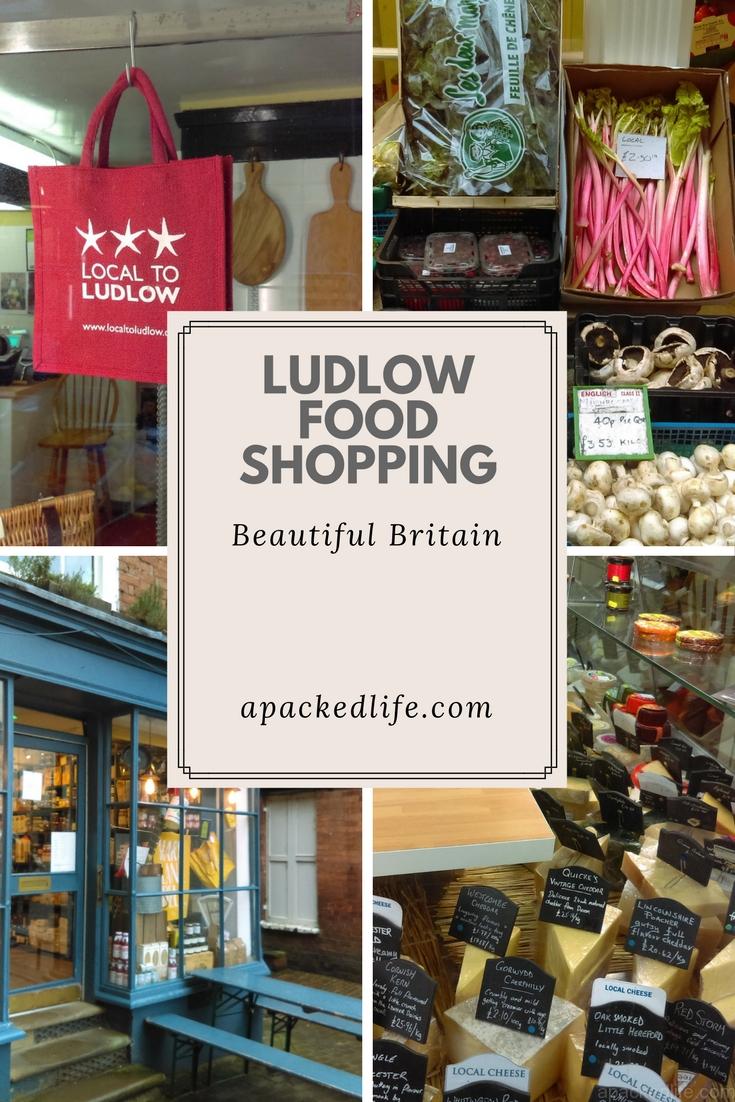 Out of town a way, you’ll find the Ludlow Food Centre.  Part of a big complex including The Clive restaurant with rooms, a Post Office, a plant centre and a cafe, the Food Centre is full of gastronomic charms.  From local beers and ciders to cheese, meat and deli counters and a bakery, you won’t be short of culinary inspiration.

At one stage, tiny Ludlow had the highest concentration of gastronomic recognition outside London, with three Michelin starred restaurants.  Although those restaurants have moved out, Ludlow’s still full of plenty of feasting opportunities.  You can try Mortimers on Corve Street for modern British and French food, or Bistro 7 on the same street, where they say

“Our philosophy is simple; smile, buy great produce locally, cook it well and never say no.”

There’s also The Clive, which is neighbour to the Food Centre at Bromfield.  The Cliffe at Dinham is a restaurant with rooms. 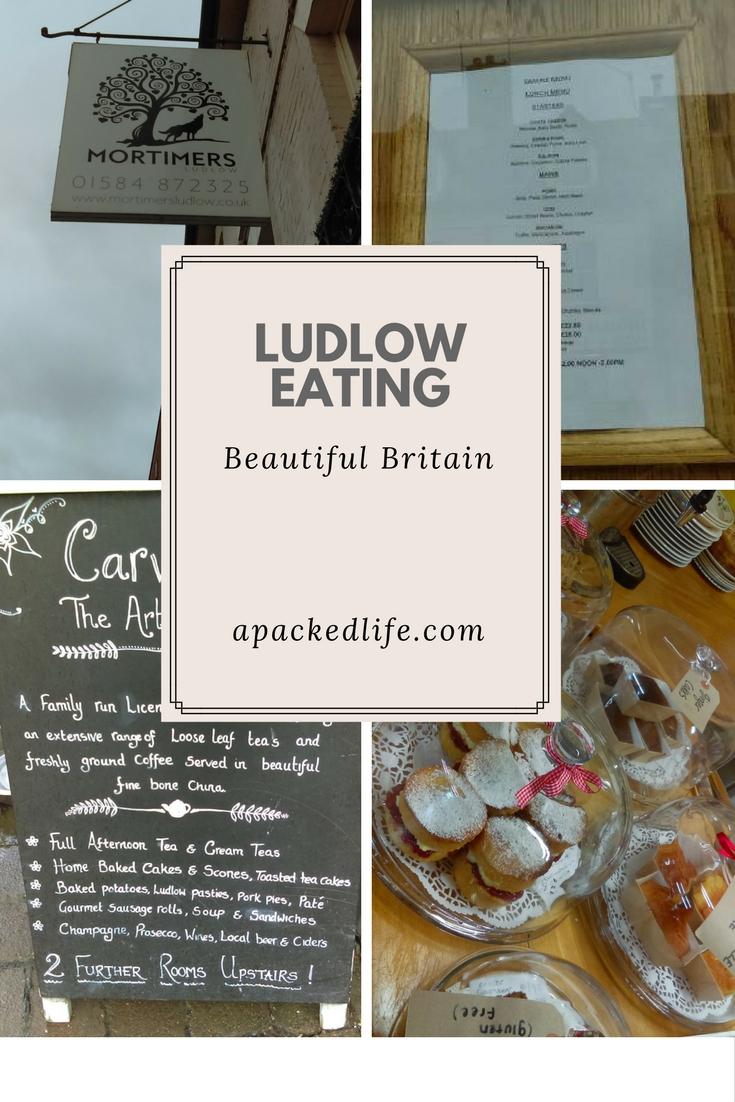 Back in the centre of Ludlow, the Charlton Arms at Ludford Bridge has spectacular views over the river and real ale to enjoy.  If you visit here in October and November, you might spot salmon on their way up the weirs to spawn.  You can also eat at The Feathers Hotel in the glorious Jacobean building.  Carvells The Art of Tea offers all kind of loose leafted pleasures.  Down a little alley to the left of Carvells, you’ll also find Working Together, a cosy community project cafe that offers a friendly welcome.  And cake.  A lot of fine cake.

In addition to all the foodie delights I’ve shared, Ludlow has plenty to offer for life’s shopping pleasures.  Again, you’re looking at a wealth of independent shops as there are comparatively few chains.  I love Pye Powder for pottery and the Silver Pear just around the corner for gifts.  There are a couple of bookstores, including one linked to Renaissance, the furniture project.  There you can wander through rooms of furniture, collectables and more books than you have hours to read them. 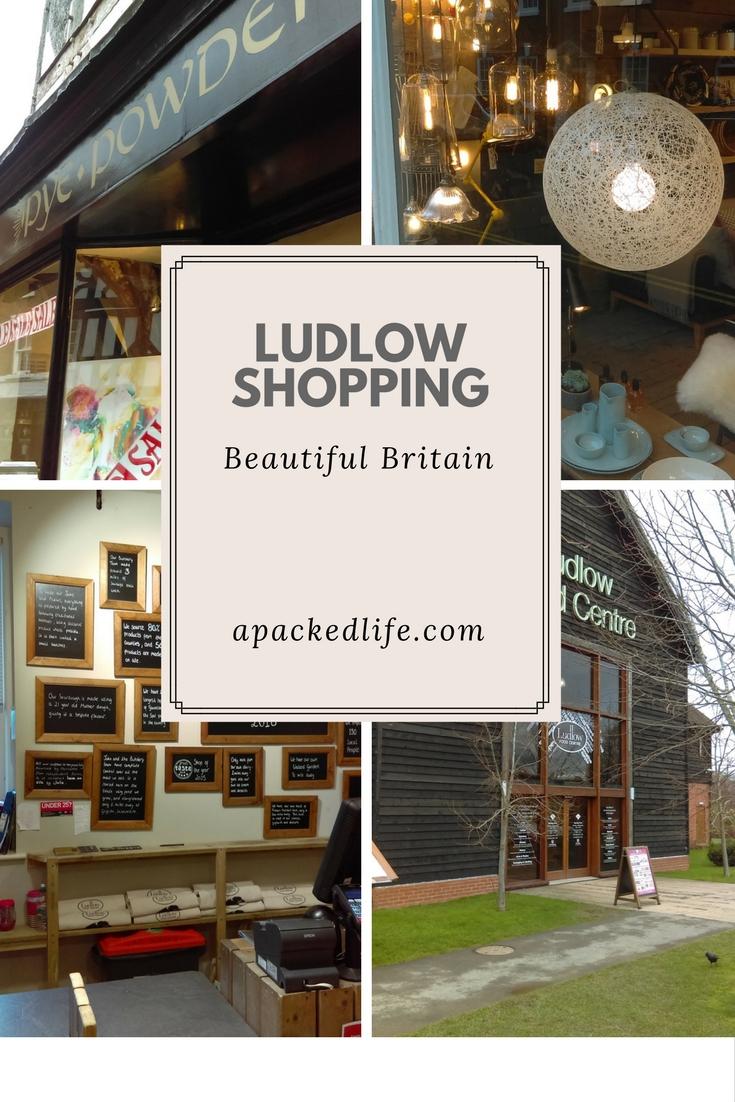 Ludlow has a rich cultural history.  Poets Sir Philip Sydney and George Herbert both resided at the castle.  John Milton wrote one of his works – Comus – specifically for performance there.

The Assembly Rooms, not far from the castle, hosts a programme way bigger than you would anticipate for a small town.  The current programme includes regular cinema screenings, and performances as diverse as an English Song weekend, the Borderlines Film Festival and the touring theatre production From Ibiza to the Norfolk Broads.

There are plenty of options if you are traveling a fair distance, or just want to spend a bit more time enjoying the town and its nearby attractions.  For budget accommodation, there are Travelodges both at Ludlow and in nearby Woofferton.  In Ludlow itself, we spent a memorable December night at the Feathers hotel, in a room with a spectacular amount of nooks and crannies.  Next door to us was a sitting room with an open fire carrying the scent of the Christmas tree located there through the halls.

The local visitor bureau will give you access to plenty of options to suit your purse and preferences.  If you wanted to stay in Hereford or Shrewsbury, either city will have you in Ludlow within half an hour or so, depending how many tractors you meet on the road. 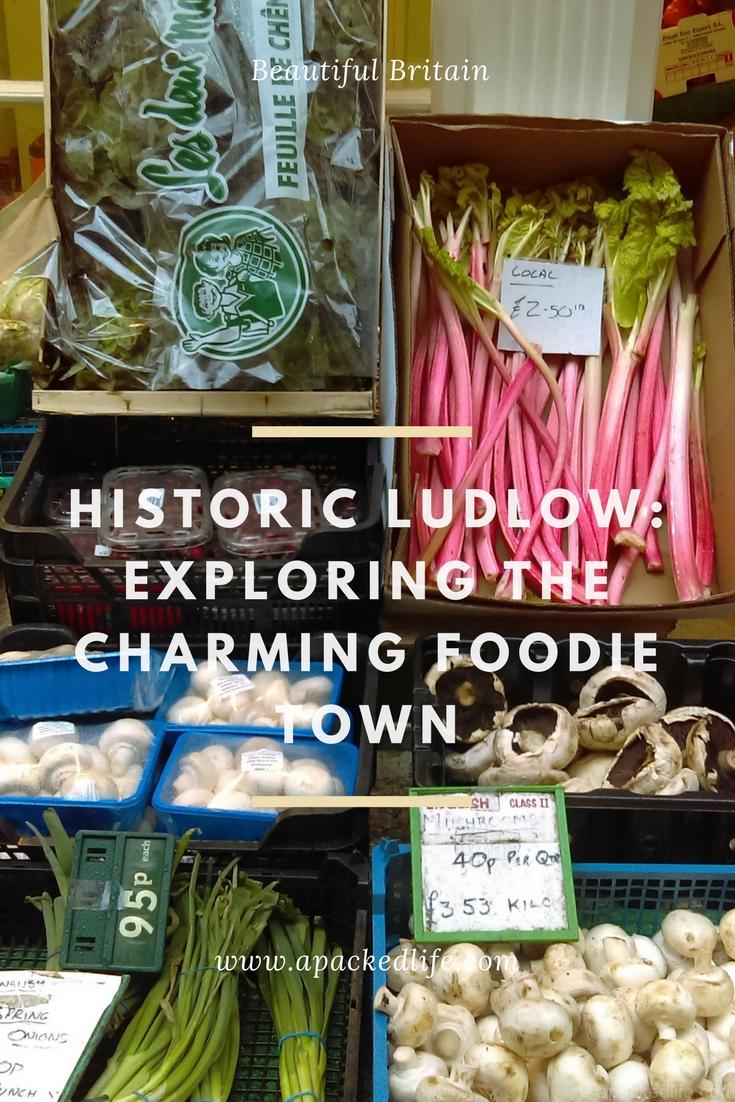 Ludlow’s got a whole lot of things to do in its own right, but if you want more, there’s plenty on offer.  Both Shrewsbury and Hereford have long lists of options for the visitor.  You also have nearby

Historic Ludlow: Getting There

Like many of the places I love, Ludlow’s not the easiest to reach.  That may have contributed to its charm.  It’s perched, as you would expect from the castle, on a Shropshire hilltop between Shrewsbury and Hereford.  If you’re heading from either of those two cities, you’ll need the respective half of the A49.

But if you’re heading from the east (and there’s not much west of Ludlow that isn’t in Wales), then you’ll need to take the road out of Birmingham through Kidderminster and past Bewdley.  As you make your way westwards, you’ll encounter a whole cluster of beautifully named towns and villages, each with their own charm.  From Far Forest to Hopton Wafers, they’re all waiting to be explored.  Try and take some time to pull over on Clee Hill to admire the spectacular views, but watch out for free range sheep.

If you’re taking the train, I’m pleased to say that Ludlow has its own small station.  You’ll need to travel via Hereford or Shrewsbury to reach it.  Both have connections from Birmingham or London (via Worcester for Hereford). 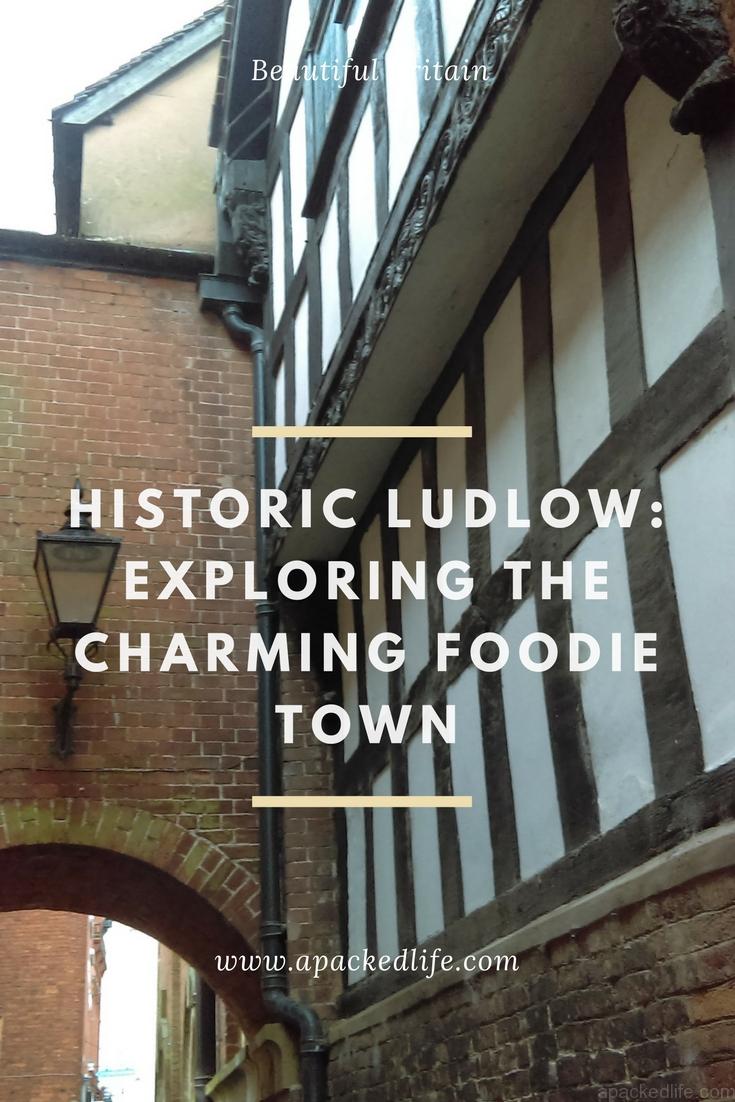 Ludlow Visitor Centre‘s website will take you through all the options for places to stay and things to do.  The strapline for the website is “The Perfect Historic Town” and I can’t argue with that.  If this is your kind of spot, you might also like our guide to the Welsh Marches, the borderlands where England meets Wales.  We’ve visited more English gems for your traveling pleasure here.

Historic Ludlow: When to Visit?

As Ludlow’s a small town, you might want to be aware of the big dates in its calendar.  Visiting for these festivals is a fine thing, but be aware that accommodation and parking may be in short supply.  There is usually park and ride set up.  If you don’t book accommodation a while in advance, you may find it easier to stay out of town in Hereford or Shrewsbury where there is greater availability.  Both cities offer plenty to the visitor in their own right.  Mappa mundi anyone?

The key festivals are:

All are highlighted on the visitor bureau’s website, so you can plan your visit accordingly.  Ludlow’s charm extends across the seasons, so whether you’re porting a hot chocolate around the streets in winter, or gathering a September picnic at the food festival, you should be having a great time. 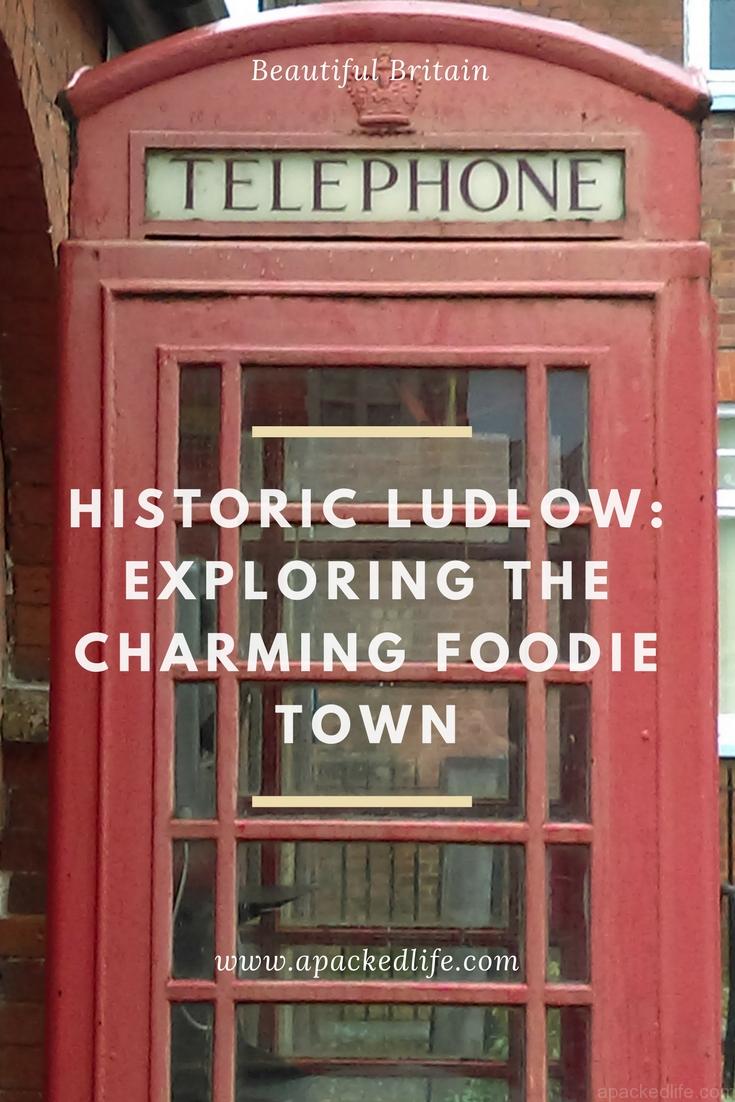