Memphis: This was the last leg of our journey through Tennessee and Mississippi in search of the Delta Blues.  By the time we arrived in Memphis, we had already spent a while lingering happily in Nashville, followed by a road trip down the Mississippi via Brownsville and Clarksdale.

If you too have decided that you’d like to be walking with your feet ten feet off of Beale, here are the highlights and lowlights of our trip.

We drove in from Mississippi, having spent the previous few days in and around Clarksdale.  Miss Scarlett, our hire car, was due back at the airport, so that’s where we began and ended our Memphis stay.  It’s a surprisingly small and easy going airport, so certainly a good introduction to the city, and a less than fraught departure point.

If you’ve failed to eat sufficient BBQ on your Memphis trip, then Jim Neely’s Interstate Bar-B-Q at the airport will serve up a large platter while you await your departure.  My husband did an impression of an industrial vacuum when presented with his massive plate.  Be advised that it’s after security, but then that’s no bad thing, as you can pass your waiting time in happy grazing.

Memphis Delta Blues: Where to Stay

We’d spent some time poring over the various neighbourhoods, and opted to stay just off Overton Square.  This turned out to be a great choice, as we had a lot of eating, drinking, entertainment and shopping options right on the doorstep of our apartment.  We were just across the road from Fresh Market, which is a Whole Foods Market style gourmet supermarket.  It wasn’t cheap, but it did have pretty much everything we needed for snacking and breakfasts.  There was also a CVS on the corner for additional supplies. 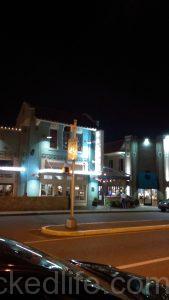 Overton Square itself has plenty to offer.  This is theatre district, so unsurprisingly you can catch all kinds of arty fare at the Circuit Playhouse, the Playhouse on the Square or the Hattiloo Theatre.  As we were there for the music during our limited nights in Memphis, we checked out the live band at Lafayette’s Music Room.

Our favourite restaurant in the Square was Babalu Tapas and Tacos.  As we need to dodge and dive around my food allergies, it was great to have somewhere so knowledgeable about preparation and ingredients right on our doorstep. Allergen information is clearly displayed on the menu.   I think we may have managed way too much Guacamole Made Tableside, and a whole lot of varied tacos.  The candy shop Sweet Noshings is open pretty late for your sugar rush.

You can get a full listing of what’s available in Overton Square here.

Aside from this section, you’ll find this post a mostly Elvis-free zone.  We knew it would be impossible to manage everything we wanted to see and do in Memphis, so Graceland went by the wayside.  As for Elvis’s presence at Sun Studio, keep reading! 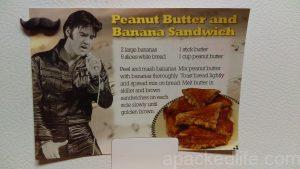 Close Encounters of the Elvis kind: his sandwich recipe on the door of our apartment fridge

I’d been inspired to take the guided tour, having read great reviews.  That was most definitely a good thing, as our guide was warm, funny and informative.  We had a real sense of the deep history of the place, and the sounds that were created there.  Our only disappointment was that it was rather Elvis-centric, and we’d like to have heard more about earlier acts and the remainder of the Million Dollar Quartet. 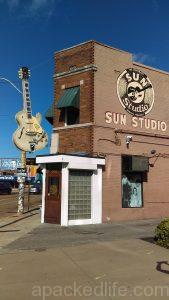 Downstairs at the front is a small cafe where you wait for your tour and can buy a whole lot of merchandise.  Then you head upstairs to wander through the exhibits, with plenty of facts and anecdotes as you go, then downstairs to the studio itself, complete with the option for the mic photocall.  You can find information about the Sun Studios tour here.

The Memphis Rock N Soul Museum prides itself on telling the complete story of Memphis music.  I was totally taken with the grounding of the music in social history, with lots of informative displays taking us through a self-guided tour.  Be aware that there are plenty of options to sit and listen to the music of every genre and era, so time will just vanish.  In fact, you might want to eat before you start! 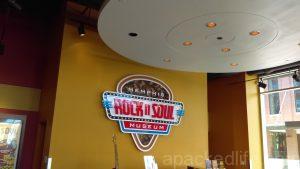 The Rock n Soul museum: don’t go past this point without having refueled, because you’ll want to spend hours here happily browsing and listening

We’d heard that the Hall of Fame wasn’t as good as some of the other museums in town, so we were pleasantly and positively surprised.  I spent lots of time happily discovering some new acts from the 70s and marveling at the sheer ostentation of some of the exhibits.  So my recommendation is that you add this to your list.  You can spend a happy couple of hours here. 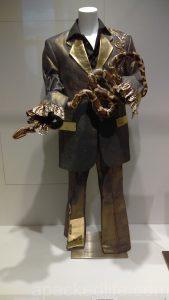 This was most definitely the highlight of my husband’s trip, and somewhere that moved him to tears.  It was a visit he had dreamed of for many, many years.   It was one of my highlights too, and would have been more so had it not been for an untimely migraine and a lot of darkened exhibits with flashing lights.  This is a sensory overload, and so full of really great music that you’ll be singing to yourself for hours afterwards. 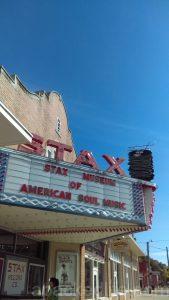 Poised and ready to enter the Stax Museum.  We’d talked about heading here for years, and we finally made it.

We had the bonus of our cab driver being a regular driver for Carla Thomas (and he was most complimentary about both her and her support of the museum).  You’ll find details about the Stax Museum here.

Memphis Delta Blues: The Peabody hotel and the Peabody Ducks

We thought we probably should do something other than listen to music in Memphis, so we headed out early to the Peabody Hotel.  If you haven’t heard the story of the Peabody Ducks, I will simply say that it should be blamed on a little Tennessee whiskey.  One night in the thirties, after a little too much of the aforesaid whiskey, a group of men decided to place some live duck decoys in the fountain of the Peabody Hotel.  Possibly an alternative to simply putting traffic cones on your head.

This turned into a tradition, along with the appointment of a Duckmaster, surely the most interesting title to grace anyone’s CV.  The ducks now live in splendor on the roof, and have been trained to march.  Each day they travel from the fountain (via a red carpet to the lift) to their duck house on the hotel roof.

Memphis Delta Blues: The March of the Ducks 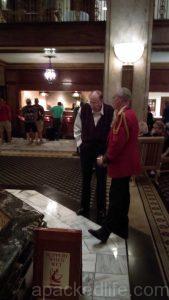 The Duckmaster in his rather splendid red uniform, overlooking a few of the Peabody Ducks.  In a few minutes, the ducks will march, in a somewhat disorganised line, down a red carpet to the lift, where a night in the duckhouse and a lot of grub awaits them.

I should tell you at this point that the ceremony itself takes only a couple of minutes, but the crowds are massive.  You probably need to arrive a good hour early.   This gives you time to check out the ducks in the fountain, and admire the Duckmaster’s magnificent uniform.  Or indeed to buy a plush duck in the hotel shop. 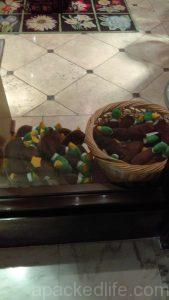 Peabody Ducks: In plush rather than feathers, if you want to practice your Duckmaster skills at home

We grabbed spare seats at a table with two RVing couples and enjoyed a great chat about travelling plus a drink with plenty of rather nice bar snacks.  Then there was a bit of pomp and ceremony, the ducks walked, and that was it.  We returned to talking travel. 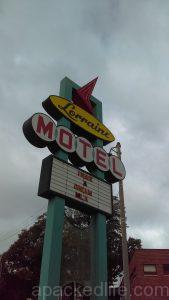 Of all the places we visited in Memphis, I have to say that this had the greatest impact on me.  I have difficulty in finding words to convey how important it is that you visit the Lorraine Motel and museum, and take time to fully absorb everything it has to tell you.

Your journey around the museum starts with a darkened room and an exploration of the transportation of slaves.  There is a palpable sense of confinement and fear in this space, the exhibit entitled A Culture of Resistance.  As you move onward through the buildings hearing and seeing more and more of man’s inhumanity to man, you feel sickened at what has been perpetrated.  I’ve written more about our visit here.

I urge you to go with an open mind and an open heart.  And when you move from the room at the Lorraine Motel where Dr King spent his last hours to look from across the street, standing in the place where the bullet was fired, expect to feel a heavy sadness at how far we have yet to travel. 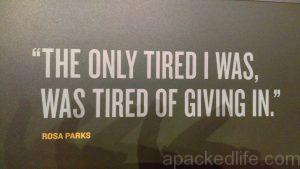 Memphis Delta Blues: We Need to Talk about Beale

We headed down to Beale Street our first afternoon in Memphis.  I think we maybe had unrealistic expectation for how much it would grab us by the heart.  Suffice to say it didn’t, nor on the other nights we visited during our stay. 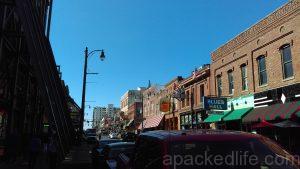 Beale by day: Time for an ice cream

We really enjoyed Schwab’s store, and the friendly ice cream vendor.  We heard decent music at Mr Handy’s Blues Hall, and at a couple more venues by night.  But it just didn’t hold us captivated, the way Broadway did in Nashville.  That’s even more odd, because when it comes to musical preference for us both, Beale should have won us over much more readily. 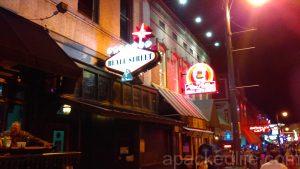 Maybe we struck a bad week.  Maybe we just saw a few too many places with enormous technicolour cocktails in fishbowls.  But we ended up feeling that there was better music and a better time to be had somewhere else that we hadn’t found.  I hope your mileage varies.

We didn’t manage to get to any of the renowned BBQ places, sadly, although husband had an ok plate late at night near Beale.  We had an allergen-friendly get-what-you-expect dinner at the Hard Rock Cafe.  Our dining highlights of the trip were Babalu at Overton Square, and also Lyfe Kitchen on Main Street.  This is a great venue for healthy fast food, and right on the Main Street Trolley route.  We’d also recommend Loflin Yard for its interesting menu, relaxed vibe and great selection of drinks. 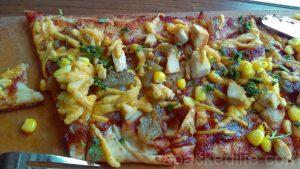 The Island Queen gives you a chance to see Memphis from the mighty Mississippi river.  It was probably the only day we didn’t have heatwave weather, but it still made for a great trip.  It was sadly a bit too chilly and rainy to enjoy her open decks, so instead we settled down in her capacious cabin to enjoy a romp through the local history.

We were inappropriately pleased to have crossed the state line to Arkansas (new state tick!) during our trip.  The tale of the bridge between West Memphis (Arkansas) and Memphis (Tennessee) also amused us, with all the posh bridge bits having been built on the Tennessee side. 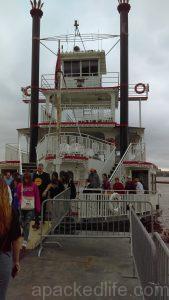 Leaving the Island Queen, Beale Street Landing.  If you want to chill for a while, laugh your socks off, and hear about the oneupmanship between Tennessee and Arkansas, this is your riverboat.

You can also read all about our journey down Highway 61 to Clarksdale and Mississippi, and our stay in Nashville. 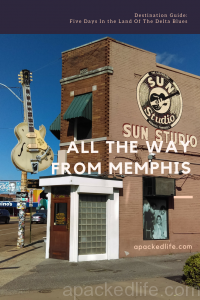