We visited Nashville in an autumnal heatwave, when it was t shirt weather on the streets.  This was the first leg of our music tour of Tennessee and Mississippi, taking in Highway 61 to the Delta Blues and Memphis.

From the moment you set foot in the airport buildings, you know you’re heading somewhere special.  Instead of the antiseptic corridors and bland background music of so many airports, Nashville welcomes you in.  Look up, and there are guitars on the ceiling.  Then listen, and your ears can appreciate real music: something way different from the norm, that captures your attention and makes you wonder what you’re hearing.  Then there’s the row of porch rockers instead of those ranked hard seats.  Nashville’s sidling up to you and letting you know she’s more than a little different right from the get go.

Wild Cow‘s a stunner.  A veggie and vegan restaurant, it’s full of the laid back charm that typifies Nashville.  And my, the food was good.  My gluten and milk free self was quickly stuffed with such fine nachos (even down to the dairy-free sour cream) that I reached a level of chill which lasted through our whole Delta Blues trip.  Also recommended are the beans and greens and the portobello mushroom burger.  Even husband, who normally finds veggie food a bit, well, full of veggies, loved this place.  And a big hug to its lovely staff team, who did their best to magic up a cab to take us back home when we didn’t think our phone torches were up to the long walk in the dark.

This is a restaurant and brewery at the bottom of Broadway.  I had a spectacular chicken waldorf salad full of candied walnuts, craisins, apple chips and celery.  Salads aren’t always memorable, but this was truly delicious.  Husband had a great burger, but perhaps more importantly for his self-confessed beer snobbishness, some really good craft beers.  Plus a lot of unrequested but very welcome samplers of other beers on offer, as our server could see he had an aficionado in town.

Cafe Lula at the Ryman

On the days (yes, it’s so good we went there twice) we had lunch here, it was plenty warm enough to sit outside and listen to the faint sounds of Casey Jones’ railroad in the background.  There’s a lot of rotisserie hot chicken served with sides plus other meats and fish including chipotle seared salmon.  It’s an airy, welcoming space with an open kitchen.

Yes, it’s a chain.  Yes, it’s in a shopping mall.  But what set this place apart was genuinely well cooked food and staff who cared to get things right.  It’s been a while since I had the pleasure of eating in Chili’s and I was very glad we went.  If you have food allergies, based on my experience, you can place your trust in them, even with a busy kitchen.

A proper traditional ice cream parlour, where you can get all kinds of sundaes, shakes, malts and even a coffee.  I have a few pictures of husband wearing part of his sundae, but in the interests of domestic harmony, I won’t share.

Enjoy Just Hanging Out in Nashville

You don’t have to do anything in particular to have a good time in Nashville, but you’ll never be bored.  We spent our first day just roaming the city and getting our bearings.  In fact, one of the loveliest things about our trip to Nashville was that we never felt pressurised to see a particular sight or visit a particular place.  A good time is happening all around you, and your choices of what to do each day happen easily.

For example, we’d pondered visiting a lot of different venues and museums (rather like in Memphis, where we did visit a lot of places).  But in Nashville, we were having such a good time just hanging out and listening to music that we didn’t feel the need.  So be prepared for Nashville to lure you into lazy Sunday morning vibes, and just go with the flow. 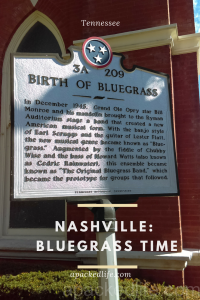 There’s music and music history all around you in Nashville.  From big stadium gigs to intimate singer songwriters to a street party on Broadway, it’s all happening in Music City.

It has to be said that we were here for the music.

If you’re in Nashville for the big name events, she’ll do you proud.  From the Ryman Auditorium to the Grand Ole Opry to the Bridgstone Arena and the Bluebird Cafe, Nashville has everything you can imagine to tempt you.  And it’s not all country, either.

Just step back and listen a while.  If you arrive on Broadway and some of the streets surrounding it, you’ll hear tempting treats of ear candy emerging from local bars and venues.  This is Nashville’s other music scene, and it’s vibrant, feisty and well worth your time.

We got sucked in on our first afternoon, and I have to tell you that it consumed our time in Nashville.  To my mind, where Nashville excels is on those days and nights when you have nothing in particular in mind.  You’ll start wandering down Broadway, and that will be a treat in its own right.  As you walk, your ears pick up the sound of something tempting, and in you wander.  Sit back and for the price of a drink and a contribution to the tip jar, you’ll hear all kinds of artists from singer-songwriters to trad country and rock to bluegrass.

These were some of our favourite venues:

With an open downstairs stage that backs onto the street, you’ve every chance of being seduced time after time into Tin Roof.  Here we heard mostly rock, varying from country-tinged to covers and even a party night.  There are also two further floors, so if you’re not quite catching the vibe downstairs, go and listen at the bottom of the stairs at the end of a song, and you might find yourselves heading up to a totally different set. 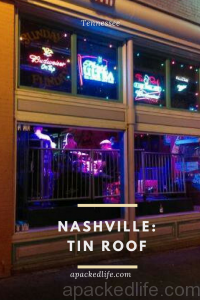 Recommended to us by the team at the Wild Cow, this fabulous honky tonk had us wandering back frequently to check out who was next on the set list.  In there we heard everything from traditional country to rousing bluegrass and relaxing singer songwriters.  You’ll perch at bar stools next to a set of shelves full of pair after pair of cowboy boots while you listen to tales of love gone wrong and women taking the law into their own hands.  If you get to visit only one place in Nashville, go here. 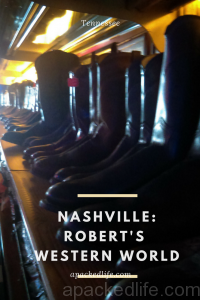 It’s not often I get to try the Moonshine of the Day.  (Vanilla when we visited, although I’d have loved to try the Jalapeno too.)  The Bootleggers had that, a whole lot of interesting craft beer, and a band playing a great blues set. 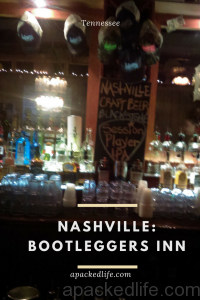 Moonshine, craft beer and blues at the Bootleggers Inn

We didn’t actually .end up at Tootsie’s.  We did, however, end up crashing her thirtieth birthday party one memorable night on Broadway.

We’d been in town earlier and saw that Broadway was closed off to traffic.  A stage was under construction, and we established that Tootsie’s was throwing a street party that night.  It wasn’t so much that we went to the party – in fact, we managed to miss the whole of Billy Ray Cyrus’s set while listening to Tom Petty covers at Tin Roof.  But we did hear lots of acts at different stages of the evening.  You know those nights when the dew is hanging heavy on the pre-dawn air, and you are leaning against the wall, listening to something lively, and thinking all’s well with the world.  That was Tootsie’s party.

You can also catch a whole lot of repartee at Big Bang, the Dueling Piano Bar.  Then there’s the Bluegrass Inn, Legend’s Corner, and Layla’s.  Or The Stage and Rippy’s.  In fact, better book your next trip right now so you can hear more.

She’ll Make You spend – but not too much

If you want cowboy boots and any of the accoutrements of Western dress, this is your city.  I managed to quell my desire for a pair of cowboy boots by reminding myself how little remaining space there was in my luggage having loaded half of Bath and Body Works Outlet for my goddaughter.  At the outlet mall you can stock up on other things that are way cheaper than their UK equivalents.  In my case, that may have involved a visit to Kate Spade.

Practicalities and A brief cautionary tale

If you decide to choose accommodation out of the city (in the centre can be expensive), be sure to choose somewhere that has some local amenities for the nights when you may not want to travel into town.  For getting around, Uber and Lyft are much easier to come by than taxis, although if you need a taxi, we found Nashvegas the most reliable.

On which note, be aware that Nashville boasts a surprisingly large mileage of railroad, a lot of which operates loudly through the night.  In fairness, our airbnb reviews did point this out, but we failed to take account of the difference between UK diesel services which stop running in the small hours, and the Grand American Freight Railroad, which runs all night hooting and rattling.  We needed a few disco naps to deal with the sleep deprivation. 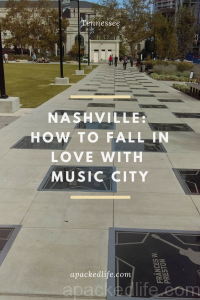 Walk of Fame Park in Downtown Nashville.  I got to stand next to Jack White and (for my mum) Johnny Cash.

How we fell in love with nashville

By all means book the big shows, but don’t forget to just absorb the vibe of the city by wandering in and out of the various venues on and near Broadway.  Be content enjoying the vast amount of free music the city has to offer.

And appreciate the friendliness of the city.  We were genuinely charmed by the people we met, and how welcomed we were.  Many cities with a large influx of visitors don’t have the same warmth for those visitors that Nashville achieves.

You can find out more about your kind of Nashville at the Visitor Centre.

If you’re extending your trip across Tennessee, you can read more about Memphis’s music attractions here.  If you are on the trail of the Blues in Mississippi, we also stopped off at the Shack Up Inn near the famous Crossroads, and Dockery Farms, Birthplace of the Blues, on the Sunflower River.

18 thoughts on “Nashville: How To Fall In Love With Music City”