Back in the early 2000s, we took our first cruise on the Queen Mary 2.  Do you remember the first time?

Deciding to take a cruise

Firstly, I must apologise for that little Pulp earworm that is affecting those of you, like me, of a certain age…  So what do you think of when I say the word “cruise”? Something your parents do? Something for the “newly-wed, over fed or nearly dead”, as the saying goes? Or is there something about the romance of the sea, and the chance of seeing so many different places on one trip that just makes you a little curious?

are we the sort of People to take a cruise?

We weren’t sure. The first time we went on a cruise, we were in our forties, liked to think of ourselves as hip and with at least some semblance of cool about us, and had friends in all kinds of age brackets. We may have been somewhat over-fed, but we weren’t even newly wed at the time. Then we saw an advert for a local cruise fair. “C’mon”, I said to a lounging husband-to-be. “Let’s go. Not to buy a cruise, but to see what the people are like who might go on a cruise.” And off we trudged to a local hotel, where I acquired a lot of free stationery, and, purely by chance you understand, a cheap two night cruise to Cherbourg on one of the world’s finest (perhaps even the world’s only remaining) great ocean liners, the Queen Mary 2.

Arriving at Southampton a couple of months later, my first impression was just “wow!”. From the meet and greet parking at the terminal to the first arrival into the grand atrium on board, that’s some serious pampering! The first thing you notice is the sheer size of the ship, and that wonderful raked bow.  She was built as an ocean liner, so her lines are much more sleek than some of the newer cruise ships.

Then you get to the cabin and see the sleekly tailored furnishings, all so art deco in style.  We had a hull balcony, a cutout in the side of the ship’s hull.  This turned out to be great, as it meant we could sit outside without being blown away, but still see everything.   A quick unpack, a sensible muster (lifeboat) drill, and we were off to the top deck for the sailaway party, with music, cocktails and a genuinely good time.

Two days on Board

I still remember lots about that trip. It was QM2’s first voyage to Cherbourg, so there was a real sense of celebration in the port.  There were even some mystery souvenirs for sale outside the port gates.   Cherbourg was still as lovely as I remembered from my childhood, when my stepfather used to visit regularly for business.  And to my surprise and delight,  they still sell Marron Suis (a chestnut dessert) in French supermarkets.

What about the ship?

Quite simply, she’s beautiful. There was far more to do than we could possibly achieve in a two day sailing.  We ended up sailing on her again to see more of her. There was a show each night, and plenty of alternative entertainment all the time. It was just about warm enough for the fabulous pools and whirlpools.  There are some fascinating talks on longer cruises; we got to hear about MI5 on our second trip.  The magnificent gym is great to burn off excesses and the ship boasts the only Planetarium at sea.

The nightclub is G32, named after the hanger in which QM2 was built.  It has the best guilty pleasures school disco nights.  I loved walking between G32 and the elegant ballroom.  Here you could dance in the Queens’ Room with full orchestra and gentleman hosts to partner you should your own partner be less than happy on the dance floor.   In the same room,  white glove service is provided for afternoon tea. We chilled out in the Winter Garden with cocktails, and watched the world go by.

I’ll never forget leaving Cherbourg. A whole flotilla had arrived to see the Queen Mary 2 slip her lines and head back to Southampton. We had yachts, pilot boats, small motorised craft, the local tourist boats, a fire hose salute and even the odd jet ski or two escort us from our berth, and sail awhile alongside us. 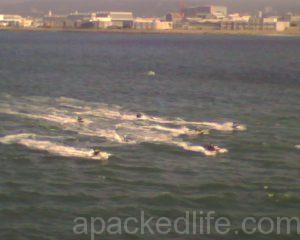 Returning to our cabin to watch from the balcony, we were amused to see a jet ski continue alongside us past the harbour wall, past the outer harbour, and into the open sea. I questioned whether we might draw our curtains at Southampton the next morning, and find him bobbing alongside us at our berth.

2 thoughts on “Queen Mary 2: Cruise to Cherbourg – Trying Out A Cruise For the First Time”