Squeezed in between the beautiful national parks of the  Yorkshire Dales and the Lake District, now a World Heritage Site, Lancashire sometimes gets overlooked.  We headed here as part of a week’s trip that took in both the Dales and the Lakes, and a sneaky bit of Cheshire on the way home,  You can check out Cheshire’s Secret Nuclear Bunker here.

I have a bit of history with Lancaster.  I went to university here in the 1980s, on the big campus at Bailrigg.  At the time, it seemed a long way from home.  Living on campus was fine, but the quality of student housing offsite in those days was a bit more spartan than now.  I can’t say I have good memories of my second year digs in Lancaster itself.  Second year students living on the coast at Morecambe were fending off the winter cold and sea breezes with nests of duvets and sleeping bags.  There wasn’t a lot of heating in the out-of-season summer lets facing the beach.

All that’s now much improved, with a massively expanded campus at Bailrigg.   Little Pendle College is little no longer.  Generally students demand and receive a much better quality of housing than was the case in my misspent youth.

The good things haven’t changed at all.  Lancaster has some stunning architecture, all in deep blonde stone, and the city is friendly as ever.  I didn’t really remember just how pretty the city is.  I did remember the Ashton memorial (known as the jelly mould) and the Castle.  The canal is still beautiful, as is the river Lune.

Before driving into the city, we stopped off at Glasson Dock for a visit to the Port of Lancaster Smokehouse.  Here my husband had a fine time sampling the chorizo, and bought the venison version.  I rued the lack of a coolbag to stock up on fish before heading to our Airbnb.

Also at Glasson Dock was the lovely Lantern O’er Lune Cafe Bistro.  Not only does this place have a great standard of home cooking, but I can highly recommend eating there if you have food allergies.  The level of knowledge about coeliac disease and allergies was outstanding.  I had a homemade burger and salad with gluten free bread.  The gluten free lasagne comes with butternut squash “leaves” instead of pasta, and you can have all kinds of pies with a potato topping.  My husband chose moules which looked and smelled gorgeous, and there were plenty more local seafood options.  The Lantern operates a bistro night on Fridays if you are in the area.

Just a few miles from Lancaster is Carnforth.  The reason that you know the name is because it was the station featured in the film Brief Encounter.  You can read about the choice of location here.  A busy station was needed for the plot, and also one far enough away from the south east that the blackout would not be broken by filming.  The refreshment room along with other parts of the station is currently being refurbished.

Also at Carnforth station is a friendly micropub called The Snug.  They have a good selection of ciders for the gluten free visitor, and a clientele of chatty locals. 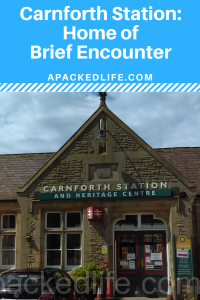 Don’t linger too long in the refreshment room at Carnforth Station.

It leads to a Brief Encounter

When we head somewhere, I’m always looking for what I’d call the “locals beach”.  Maybe you’re the same.  Less crowds, less – I don’t know – showiness, maybe?  The kind of place where people who live nearby bring their dogs, their children, and in this case, their horses.  We stopped off for lunch at Archers Cafe at Red Bank Farm, where they were remarkably patient with all my questions about gluten and dairy.  My sandwich lunch was fine, and the local potted shrimps my husband chose were great too. 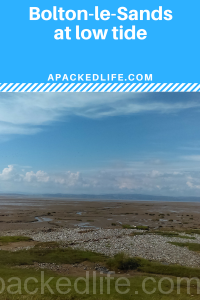 Rock pools, children having the time of their lives with grandparents, a bevy of happy dogs and one very laid-back horse.  Welcome to the tidal flats at low tide.

Then we moved across, sat on the wall, and took the sea air.  To be more accurate, we marveled at the tidal flats,  it being low tide, and the sea having fled what seemed like miles.  There were all kinds of dogs exploring: a small black one who appeared to take flight over the rock pools, a brace of golden retrievers, a rottweiler escorted by a collie, and the mandatory yellow labrador being persuaded not to jump into the muckiest pools.  We were surrounded by a group of cheeky birds, searching out the occasional crumb left by our wall-sitting neighbours.  A horse took to the rippled sands.

We had a walk on the sands, sat on the wall a while,  and delighted in just being alive on a sunny afternoon with the salt in the air, sun on our backs and the birds calling.  Having checked on the tide times, we popped back the next day to see the place radically changed by the rising tide.  You can’t argue with such spectacular natural beauty.

And At High Tide 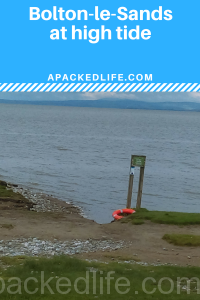 This picture was taken the next day almost at high tide, and all the landscape in the first picture has disappeared under the water.  There’s a sign above for reporting any incidents on the tidal flats, and a reminder just how significant the rush of the tide can be. 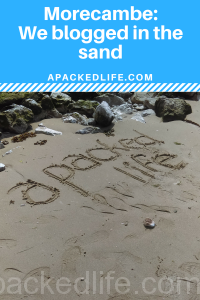 It was irresistible.  How could we not grab a blog picture on such a ready canvas!

This is the quintessential old-fashioned seaside resort.  We therefore did the quintessential old-fashioned seaside things.  We bought fish and chips, and ate on the beach, watching people run in and out of a bracing sea.  There was a walk on the sands, a stop off at the legendary Brucciani’s on the front for a sundae and tea, and the wasting of £3.60 in the 2p slots in one of the arcades. 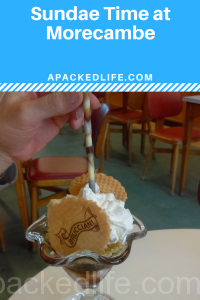 I had problems getting a picture before the ice cream was inside the husband.

I’ve saved my recommendation of the very best until last.  We were staying to the east of Lancaster, not far from the village of Wray.  We’d seen the signs for the Forest of Bowland, and on our last afternoon, we decided it was time for a drive.  If you ever wanted to explore a hidden gem, this is it.

The Forest has been designated an Area Of Outstanding Natural Beauty, and it’s not hard to understand why.  You can read more about what makes an AONB here, and what makes Bowland special: heather moorland, blanket bog and rare birds.  The contrasts we saw driving and wandering were spectacular.  So spectacular, in fact, that we ended up spending over four hours meandering late into the evening.  We plan to return to do it all over again, and for a longer time.

A Drive Over Moors and Fells

We drove south of Lancaster, passing the university campus at Bailrigg and the village of Galgate.  Heading east along the river valley, we could see the gritstone fells ahead.  We passed through beautiful tiny villages which were probably hamlets, heather moors, rocky rivers and places so isolated the only thing on our satnav map was the road we were travelling.  The header photo to this post shows our first picturesque stop by the side of a rocky riverbed.  And there were many more spots just as perfect.

We buzzed over upteen cattle grids.  There were sheep – lots of sheep  – rabbits gallivanting at the edge of the road, cows and a rather assertive group of bullocks blocking our path not far from one of the steeper summits.  Fortunately one of the rare drivers we passed was able to encourage them onward by leaving his car and clapping his hands vigorously.  We even saw plenty of grouse in the moorland parts of our journey.

If you like to find places largely untouched by change, and where you can find yourself in splendid isolation, this may be one of the most undiscovered destinations in England.  We’ll certainly be back, with a large picnic and our walking boots.  Did I tell you just how spectacular it is? 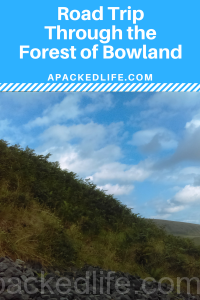 Up on the beautiful fells.  One car in half an hour.  Three rabbits.  What seemed like three hundred sheep.  Five indolent grouse.  And a few assertive bullocks.

If you’re thinking of heading to the north of England, don’t overlook Lancashire.  Staying to the east of Lancaster put us in a great position to wander around Lancashire itself, and also to get to the Lake District and the Yorkshire Dales easily.  With the exception perhaps of the Forest of Bowland, which has narrow roads and steep gradients, it’s a series of easy drives across the county.

Highlights for me were definitely the Forest of Bowland and the unspoilt beauty of Bolton-le-Sands.  Take a picnic for the former, and check the tide times before you head to the latter – it’s a completely different experience at different stages of the tide.  Glasson Dock has much to offer the travelling stomach.

Lancashire’s not just the place you travel through to get to the Lake District.  Don’t forget to stop off and give Lancashire some love too.  It’s got a bunch of red roses for you.

Lancaster and the red rose

Rosa Gallica Officialis, the Apothecary’s rose, is the Red Rose of Lancaster, and was possibly the first cultivated rose.  Its history is intertwined with the House of Lancaster and the Wars of the Roses (with York, symbolised by the white rose).  Henry Tudor combined the red and white roses into a single emblem, called the Tudor Rose, in 1485.

25 thoughts on “Road Trip Around Lancaster, England – Visiting the land of the Red Rose”