English spa towns like Leamington have a fascinating history.  Back in the days when Jane Austen was coyly decoding the way in which a love rival held her fan, people were flocking to spa towns to take the waters.   The health-giving properties of mineral waters were discovered long before the days of water sommeliers, and there was a boom in towns with access to the crystal clear nectar.

There are a surprising number of English Spa towns.  I say this, as so many of them have dropped the Spa suffix in everyday usage.  So we may no longer think of places like Cheltenham, Droitwich and Leamington as being places where the boom in health-giving waters drove visitors in large numbers.

Blame it in the Pigeons

It’s said that Cheltenham became famous as a spa town due to a group of pigeons pecking at salty deposits from a stream.  Locals with an eye for a business opportunity sealed off the stream and began charging for access.  Soon there were people of “great fortune and nobility” taking those waters, and dancing in the assembly rooms built for the purpose of their entertainment.

One such customer was King George III, who visited for five weeks after a rather vicious bilious attack, taking the waters in private early each morning.  Although the King never returned there, a trend had begun, and elegant terraces, promenades and gardens supported increasing numbers of visitors. 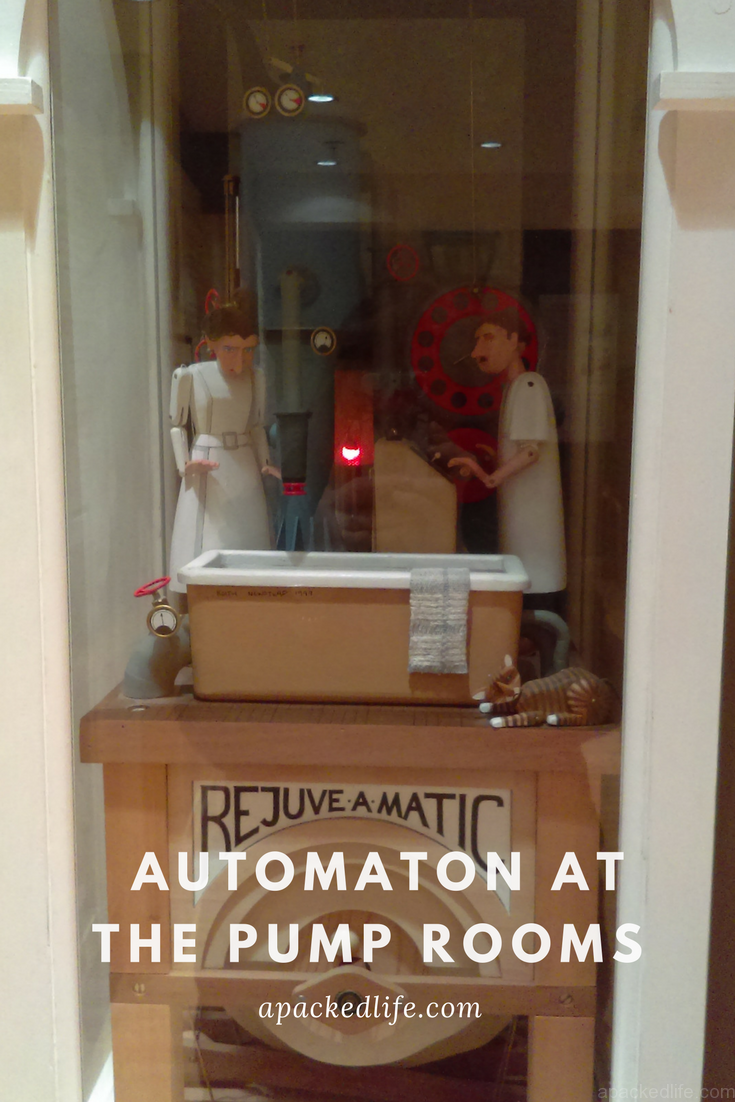 I’m wondering what a Rejuveamatic might do for me.

Probably the first spa town was Bath, with natural springs named Aquae Sulis by the Romans.  Queen Anne visited four times for the waters, creating a fashion that continues until today.  You can visit the Thermae Bath Spa to take the waters now, including in a rooftop open air pool.

Other towns caught the vibe, including Droitwich and Malvern.  The naturalist Charles Darwin was unsurprisingly rather fond of Malvern, no doubt captured by the spectacular scenery of the hills.  There are still springs and drinking facilities dotted around the Malvern Hills.

Leamington is situated in Warwickshire, not far from Shakespeare’s Stratford-on-Avon and Warwick.  There’s a direct rail service to London, and onward connections via Birmingham to other parts of the UK.  When I checked on its size, it’s actually smaller than I thought with around 50,000 residents, making it less populated than places like Hereford, and less than a fifth of the size of nearby Coventry.

The first impression of the town is awe at its Regency gorgeousness.  Architectural splendor is everywhere, with gently raked Georgian terraces leading up the soft slopes of the town.  If you arrive by train, your walk into the centre takes you across the River Leam, and through parkland to the beginnings of the terraces that mark the town centre.  Just past the bandstand, you’ll find the Pump Rooms.  It’s here that you can learn more about the town and its impressive history. 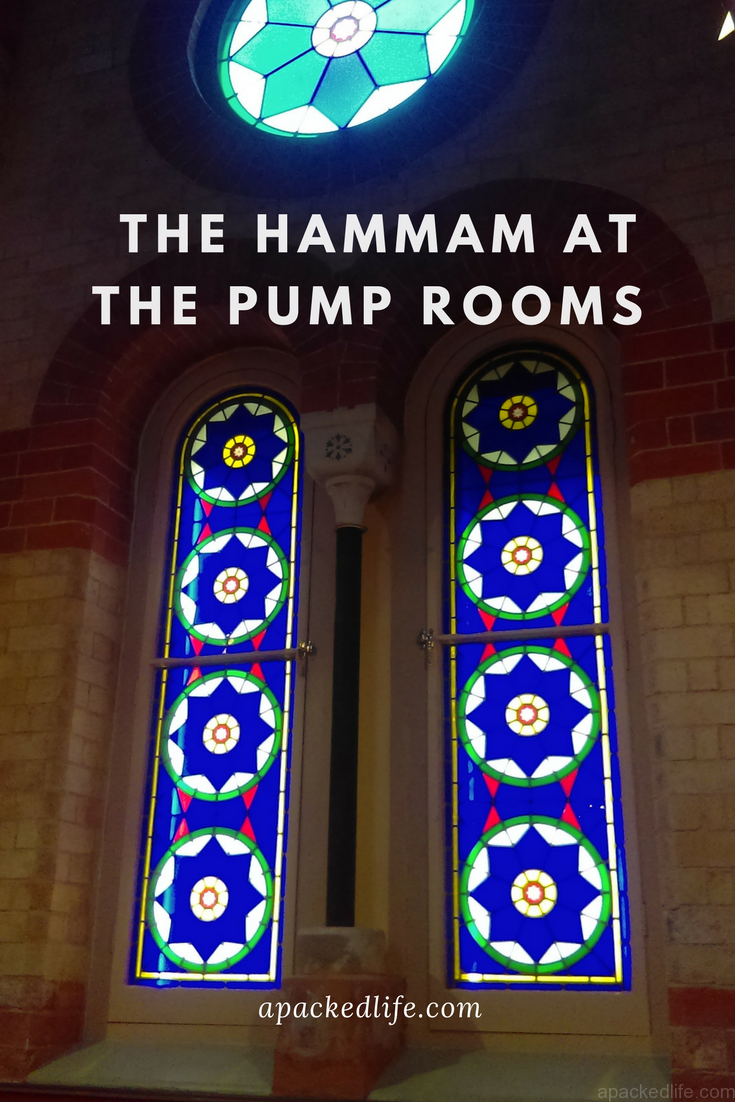 Although I’ve visited the town regularly for probably the past twenty years, I’m ashamed to confess I hadn’t visited the Pump Rooms until earlier this year.  And what a lot I’d missed out on, as this is a fascinating place.  It also contains a museum, art gallery, a cafe and the town library.  You can see that it’s easy to lose at least a morning here.

First up are the Pump Rooms themselves.  When you enter, you step through into the Hammam.  With impressive tiling and stained glass on show, you get a sense of the pleasures of taking the waters here.  As part of your journey, you are taken through the experiences of some of the workers in the building.  You can hear tales of Hannah, the manager’s wife, serving spa water in 1833 and  George, a shampooer in the Turkish bath in 1876.  Then there’s Annie, a masseuse in 1927, promoted to matron a year later and able to give plombieres treatments (colonic irrigation).

“A Turkish Bath here has been most refreshing; and the great quiet of the spacious cooling room…after leaving the Turkish bath is an immense boon to a nerve sufferer.  I found the masseuse most attentive.” E.M. Newby 1905, quoted at the Pump Rooms exhibition

As you move through the exhibits, you get a flavour of the social mores of the time.  There’s the focus on bucolic splendour and tranquility, and the sense of celebration arising from the health benefits of the treatments.  This of course led to the need for social spaces, and the wildly impressive buildings that were created to meet this need.

Should you fancy trying it out yourself, the spa regime is made up as follows: 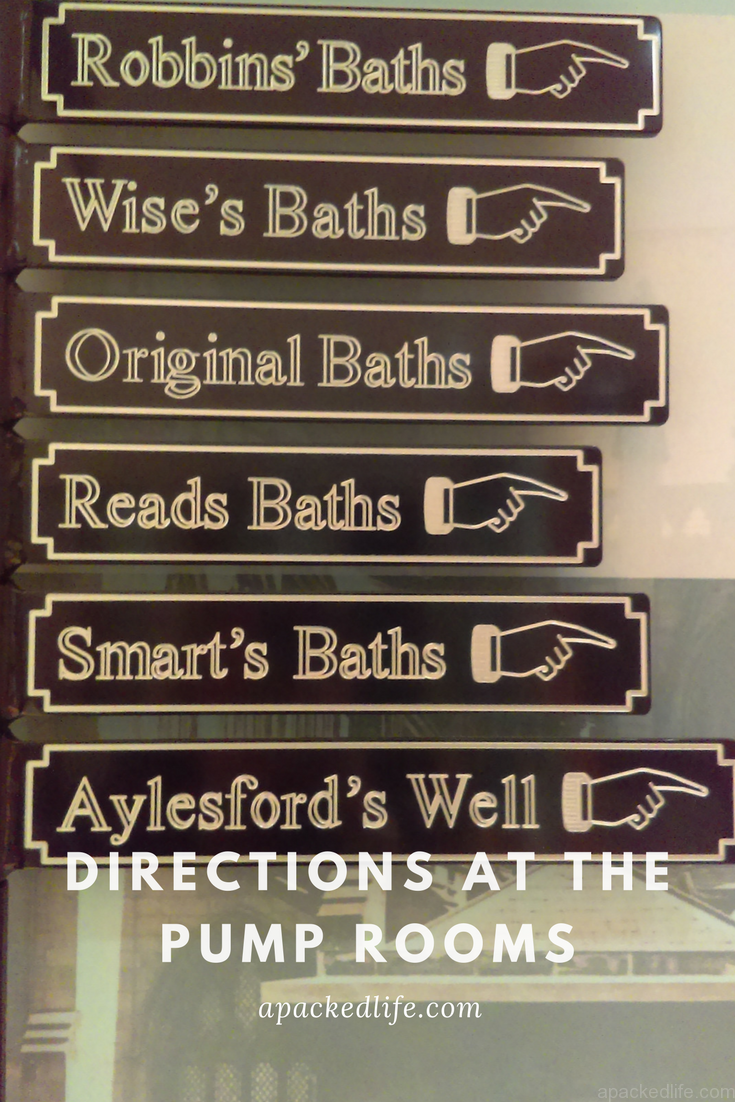 There were quite a few options for taking the waters, no doubt assisting in meeting the need for promenading as part of the cure.

With that need for promenading, it’s not surprising that rolling parkland complemented the treatments at the Royal Pump Rooms.  Jephson Gardens are named after a local doctor, credited with saving the Pump Rooms from closure in 1861.  Bordered on one side by the River Leam and on the other by pretty Newbold Terrace, the Gardens have a clock tower, a bandstand and a cafe.  Also in the gardens, you’ll find East Lodge, an Art Gallery with four artist’s studios and a new exhibition each month. 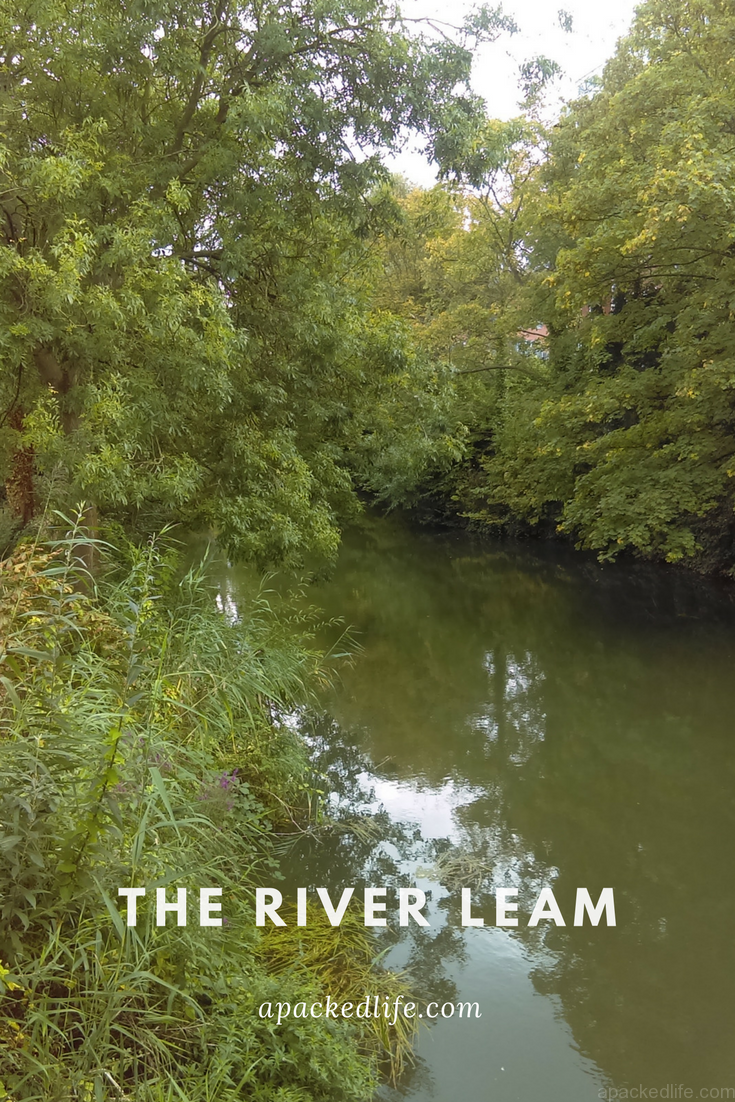 There’s more to Leamington than history.  There’s a shopping centre – Royal Priors – and main street – The Parade – containing all the normal high street shops.  But you’ll find Leamington is absolutely crammed with independent shops and businesses offering all kinds of services and products.  Temptation lurks in every corner, and the town merits exploration to turn up some of its best treasures. 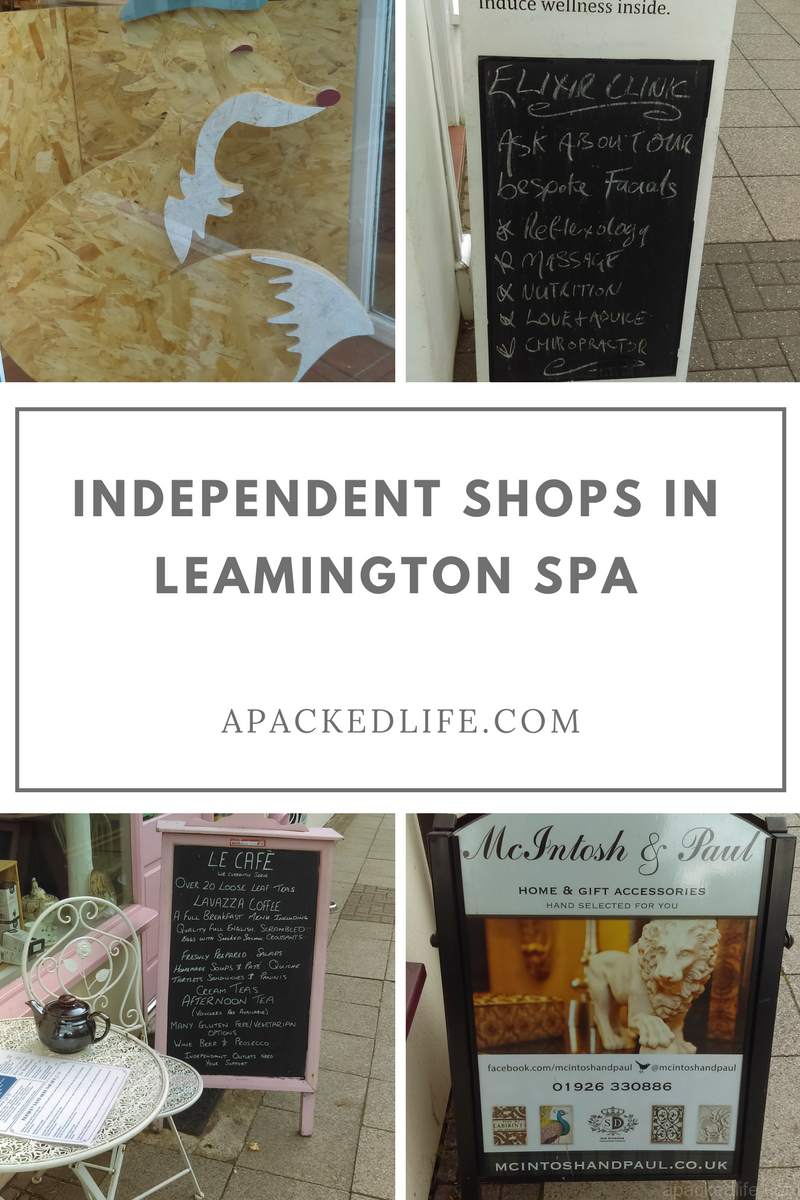 Sadly, I can’t offer you tried and tested recommendations on where to stay in Leamington.  It’s so close to home, I have always rested my head on my own pillow.  But I can offer you some places to go and things to do.

For some fascinating evenings, you can try The Assembly.  Contained in a magnificent ballroom, no doubt full of the memories of all kinds of genteel events from eras past, The Assembly offers a wide range of gigs.  We’ve seen acts from Graham Parker and the Rumour to The Beat here.  And if you are ever fortunate enough to get a backstage pass, check out Tammy Wynette’s trailer – all glass and crystal – and a stray dalek or two.  Magnificent.

There’s also plenty on at the Royal Spa Centre.  From Shakespeare to comedy, you’ll find it here.  Then there’s the Loft Theatre.  Plus live music, more comedy and even speed dating at the Royal Pug, or food, music and cocktails at the Leif tearooms and piano bar.

For foodie recommendations, check out Taste Leamington.  You’ll find more than 60 independent venues in town, giving you some idea of the strength of the food scene here.  There’s also a food and drink festival held each September and various other food events throughout the year.

Rather amusingly, on the morning of drafting this piece, I noticed that Leamingon had a social media buzz going on.  It turns out to have been ranked the happiest place to live in England.  You can check out the BBC’s report here.  Interestingly, other spa towns – Harrogate and Tunbridge Wells – also make the list from the survey compiled by Rightmove.

You’ll find the Visitor Centre here.  Taste Leamington will let you search for your feasting opportunites by cuisine, ownership and even by dietary factors such as places offering gluten free options.

If you’re in the Midlands, why not check out other places in the area?  We’ve got you covered for time with the Bard in Shakespeare’s Stratford  and adventures on the borders with Wales in Hereford and Ludlow. Or try the thrills of the big metropolis in brilliant Birmingham, England’s second city.

If you liked this, why not Pin It For Later! 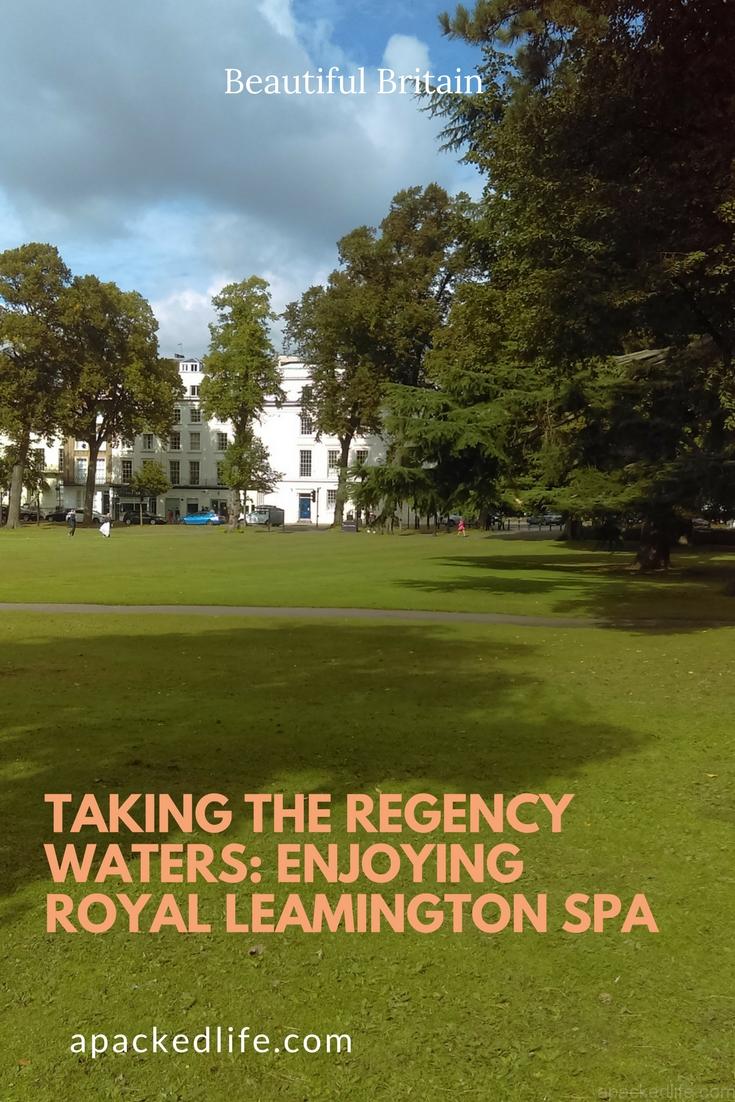 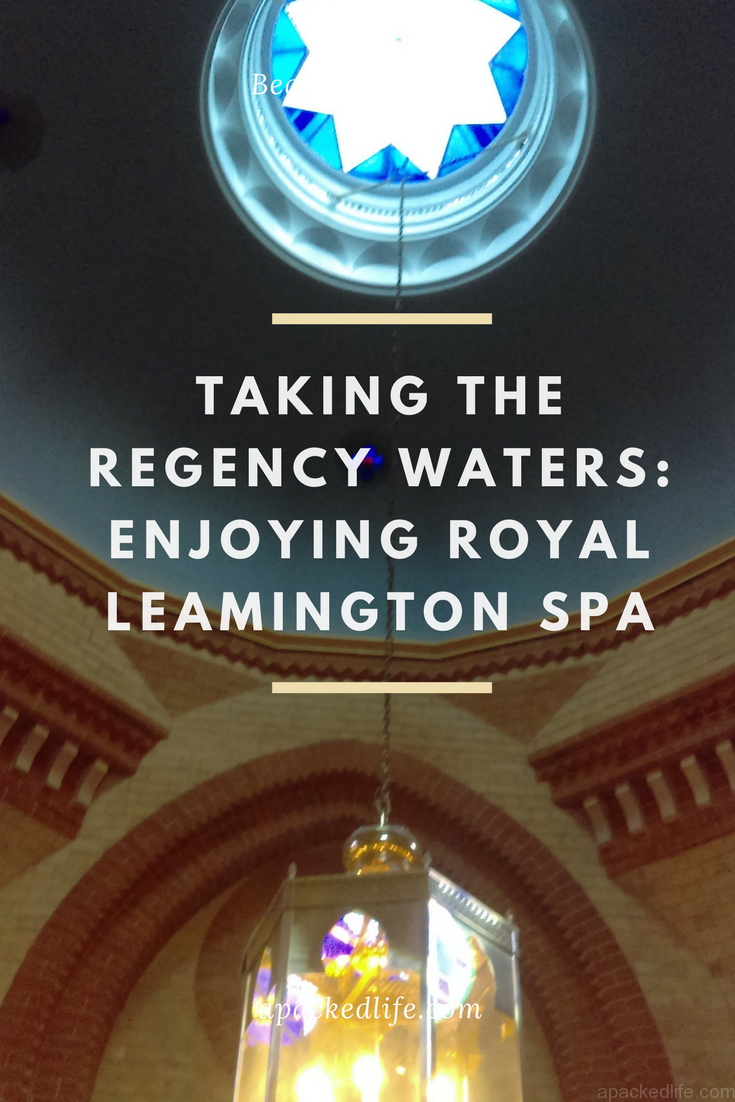