Nostalgia tastes sweet, and never more so than when mixed with a tang of salt at the seaside.

Time spent at the seaside

I was brought up, pretty much literally, as a beach baby in England.  My parents moved to the coast when I was a small dot. I spent a lot of my childhood as a sandy toed beach urchin, towel and book under one arm.  Although I now live about as far as you can get from the coast in England, I’m still up for any excuse to get to the sea.  So here’s my guide to the best seaside experiences I can muster in England.

The Traditional One: Morecambe

Say “seaside” to most Brits, and they’ll have a vision of what constitutes a classic seaside resort.  There will be the beach itself, of course, sometimes sandy, occasionally shingle or a mix of the two.  But the beach won’t necessarily be the star of the show.  For that, you’ll need all the extras that make up the day at the beach: a penny arcade, or in most cases these days a two penny arcade at best, maybe a pier to wander, a promenade, a theatre or two for evening entertainment.  There will be shops selling the classic collection of beach toys including buckets and spades, and a whole load of sticky confectionery seldom seen other than at the beach.  There will be a faint tang of fish and chips in the air, mixed with hot dogs and probably pizza. 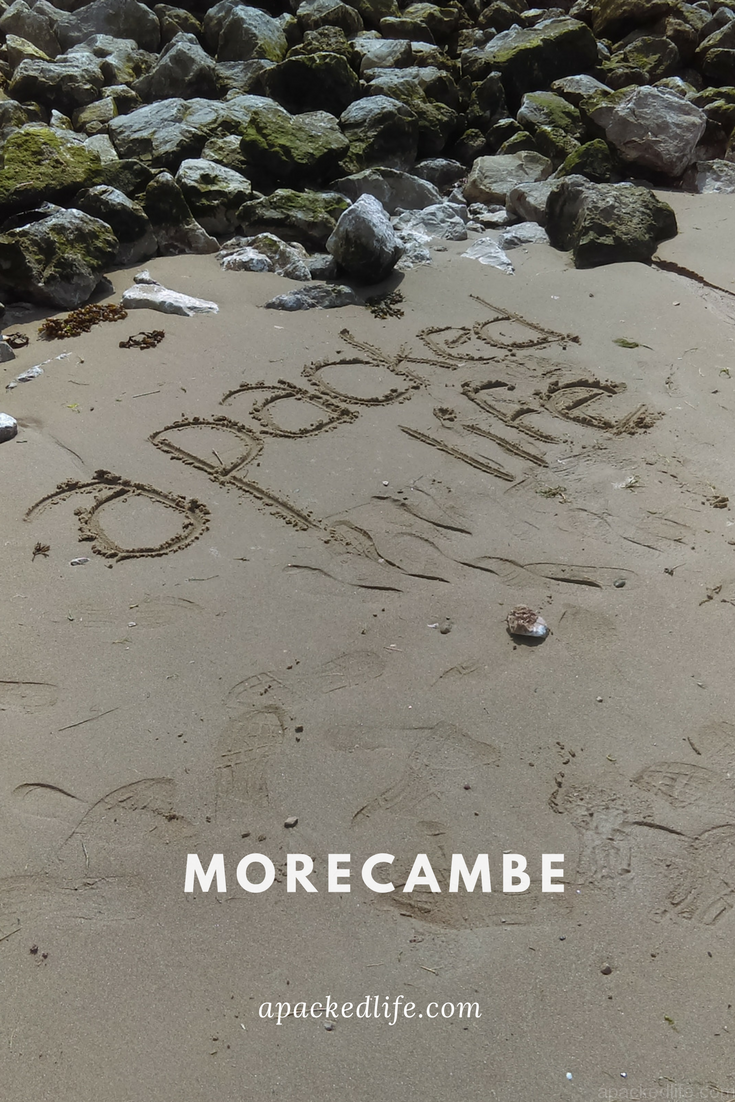 Blogging on the beach in Morecambe

Morecambe on the Lancashire coast is a great example of a traditional seaside town.  Sadly the pier is no more, but you can still promenade the sea front, pick up fish and chips to enjoy on the sand, and catch an evening show at the theatre.  After you’ve managed to waste a few pounds, two pence at a time, in the amusement arcade.

The Transitional One: Ilfracombe

Some very traditional seaside towns have bumped into an updated version of themselves.  Ilfracombe, for example, is still full of Victorian bed and breakfast accommodation, souvenir shops and quaint tea rooms.  They now sit alongside a restaurant and sculpture by Damien Hirst at the Quay.  It’s an interesting and sometimes challenging combination. 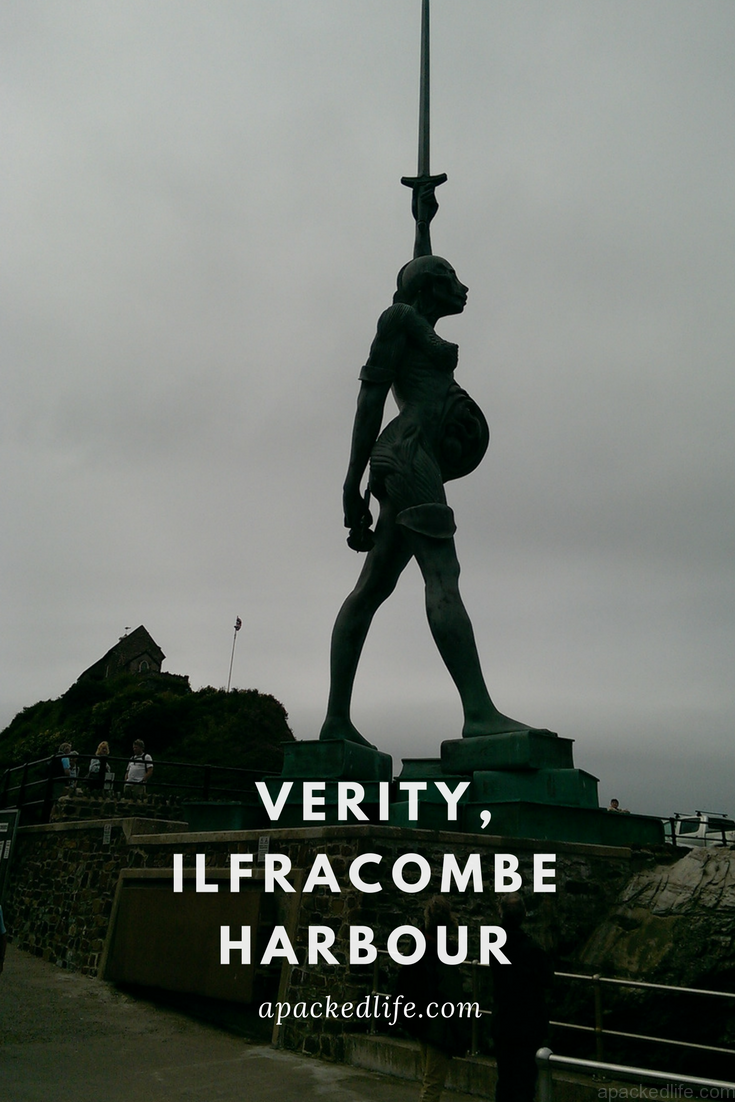 Verity stark against a stormy sky at Ilfracombe Harbour

From Ilfracombe, you can also pick up a ship to visit Lundy Island.  Lundy is a full day in itself, where you can get to experience something rather wilder than anything Ilfracome has to offer.  The MV Oldenburg will take you to the island, where you can spend a day exploring its three miles of contrasting landscapes.  You’ll find rugged cliffs to the Atlantic side and a softer landscape facing the Bristol Channel.  The whole island is a Site of Special Scientific Interest and was England’s first Marine Conservation Zone, with unique flora and fauna.

The Chilled One: Saunton Sands

There are some beaches that see a steady procession of people settling in for the day.  Saunton Sands, just around the headland from the surfing bay of Croyde, is three and a half glorious miles of soft sand, so flat and similar to Normandy that it was used to practice the D-Day landings.  Saunton’s backed with sand dunes, a row of beach huts and a lot of rockpools to the right at low tide. 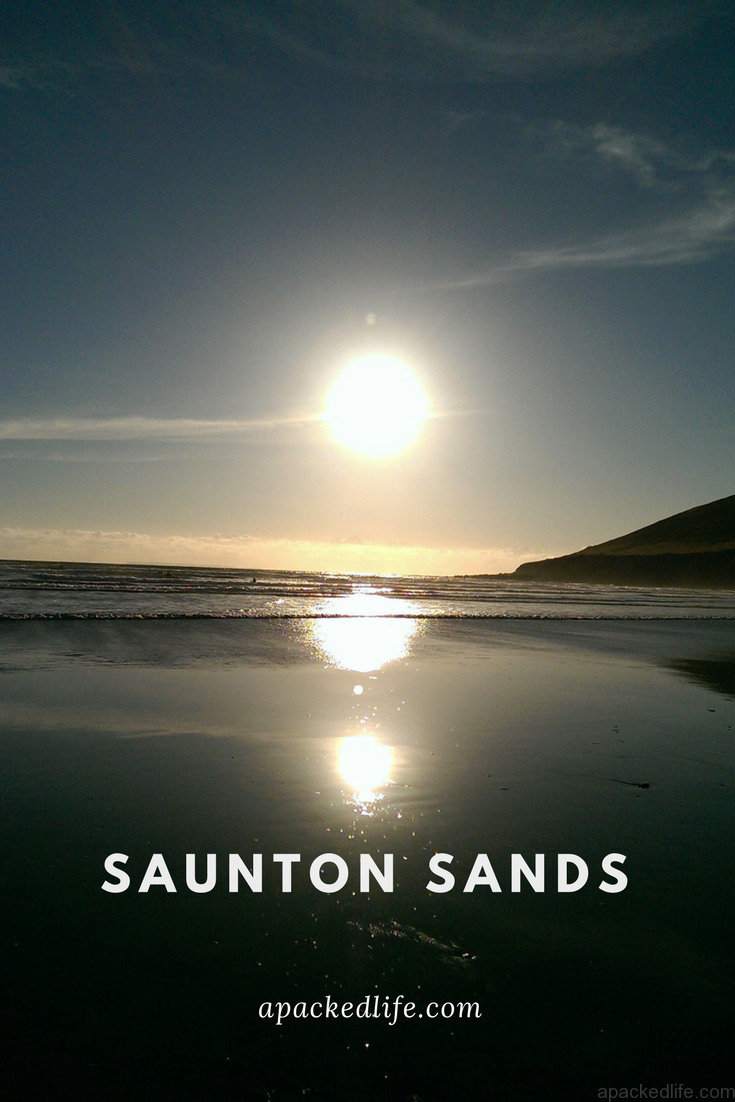 And breathe…  Chilling with another perfect sunset at Saunton Sands

Rent yourself a beach hut for the day, complete with windbreaks, deckchairs and a refuge should the Devon liquid sunshine appear, and you’ll be ready for a fabulous time.  At the entrance to the beach, you’ll find a large airy cafe with a first floor balcony with magnificent views.  I can vouch for the wonderful treat of strawberries and cream watching the sun slide over the sea in the late afternoon.  Downstairs, there’s a shop for ice creams, of course, and chips to enjoy on the sand with the twin tangs of salt on your lips from sea and snack.

On the beach itself, you’ll find all kinds of visitors.  There are the local dog walkers,  often introducing themselves to you in order to retrieve a dog who has decided you look the kind of person to throw his ball for him.  Then there are the groups of bodyboarders, wetsuited and dedicated to the bigger waves to the right of the bay.  In front of the beach huts are the families, sometimes brought to the coast by local relatives.  Then there are the unexpected but wonderful gatherings, like the group of sixtysomethings giving a word-perfect rendition of Bob Marley’s Three Little Birds to the assembled huts.

The Wild One: Bolton-le-Sands

There are still some beaches in England that are essentially wild, with very few facilities and visited mostly by locals.  Bolton-le-Sands is dramatically tidal; visit at high tide and you’ll find just a few feet between the low sea wall and the water.  At low tide, you can walk for mile after damp sandy mile before you can find the sea.  The area can therefore be dangerous for the unwary, and it’s wise to consider the tide times carefully before walking out a long way at low tide. 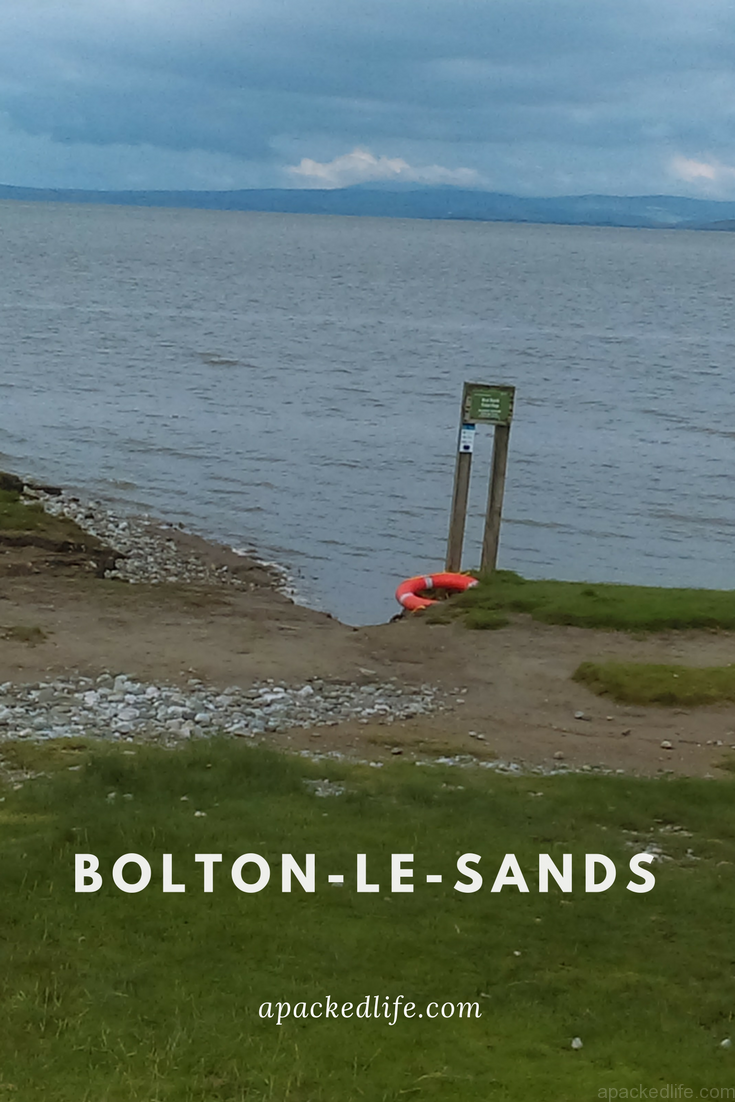 That’s high tide at Bolton-le-Sands.  At low tide, every bit of the sea you can see there is gone, leaving a landscape of rock pools and sand flats.

But at low tide the treasures the ebbing tide uncovers are magnificent.  Here is rockpooling of the highest order.  On the day we visited, there were two small lads being shown the time of their lives by a pair of patient and loving grandparents.  This is the stuff of my childhood adventures at the seaside: watching crabs, jumping around the rocks. spotting new seabirds and finding wildflowers.  It’s wonderful to know that places like this still exist.

The Seafaring One: Hartland Quay

You have to drive a fair way down narrow wildflower lined country lanes to find this place.  In fact, you’ll think you’ve finally arrived, then realise you’ve just reached the lighthouse.  The Quay itself is further away, down an even narrower winding trail to a small hotel and complex at the bottom.  Then you can walk onward to Hartland Quay, where there’s a small museum sharing information about the Quay’s seafaring past, including shipwrecks and smuggling. 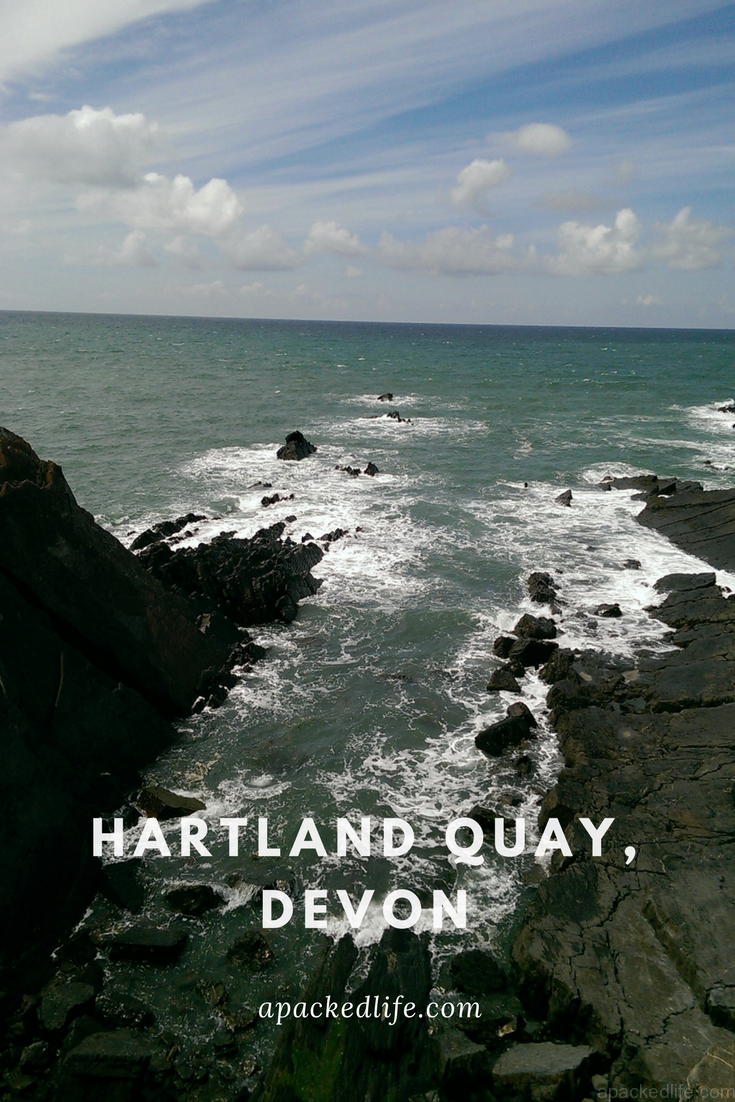 You can see just how rugged the coast is here at Hartland Quay.  To the right of this picture, the lighthouse at Hartland Point helps to protect shipping.  But there are still plenty of tales of shipwrecks at the museum.

The Quay itself is craggy and full of stones.  You can get down to water level at low tide and enjoy scrambling across the rocks to investigate the rockpools.  When we were last there, we saw a hanglider across the cliffs, silhouetted against a cloud cloaked sun.  Then there’s the cliff top view down to the bay itself, a massive drop culminating in pounding waves.  You can really appreciate how shipwrecks happened here, and see the need for the lighthouse perched on the headland.

Which would you choose?

The great thing is that there are so many different seaside experiences to be had here in England.  We’ve had lazy days with family, complete with chips and milkshakes in a cafe.  We’ve watched the waves pound the cliffs with enough violence to be scary, even some thirty feet above.  And we’ve run through the water’s edge, chilly toes in the sand, and just celebrated the sheer pleasure of being alive.  Masefield got it right: I must go down to the seas again.

We’re working our way around these lovely islands to show you beautiful Britain.  You can see more of the Lancashire coast here.  Venture eastwards to the stunning Yorkshire Dales, where we took the train to the Scottish borders.  We’ve also taken a rather longer sleeper train to the Scottish Highlands.  You can explore charming Regency Royal Leamington Spa, voted the happiest place to live in England, and find Shakespeare’s country here.  Take a trip to Birmingham for a dose of city life, or else enjoy the tranquility of the Welsh borders. 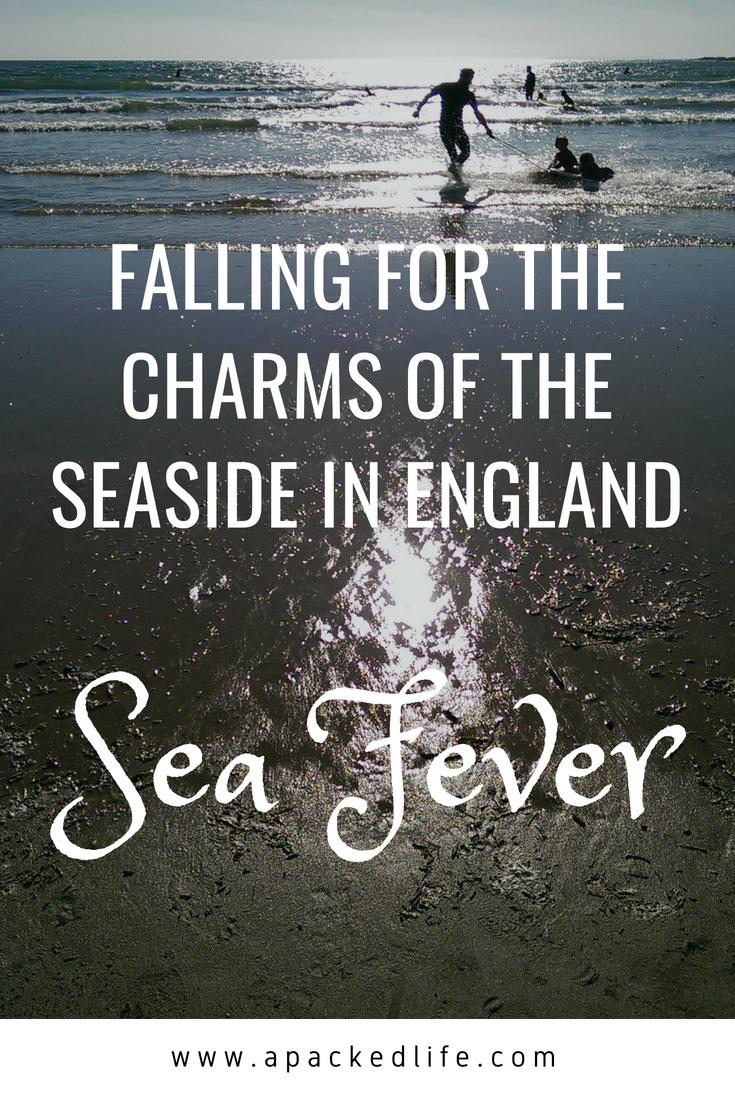 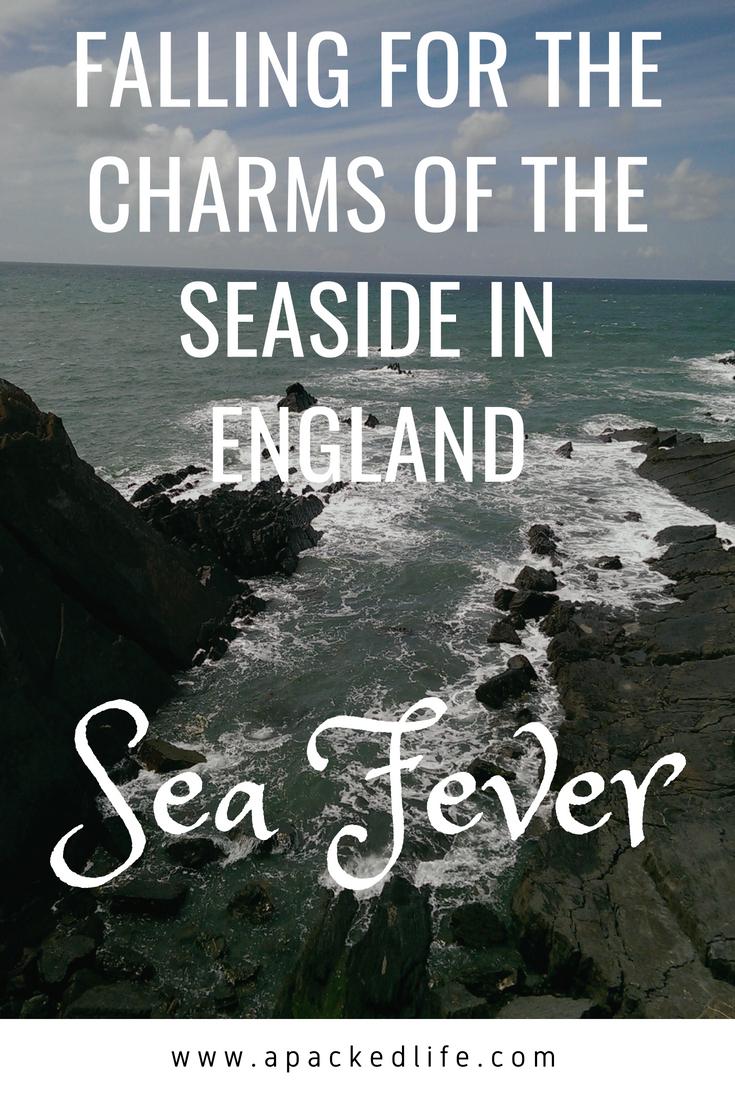 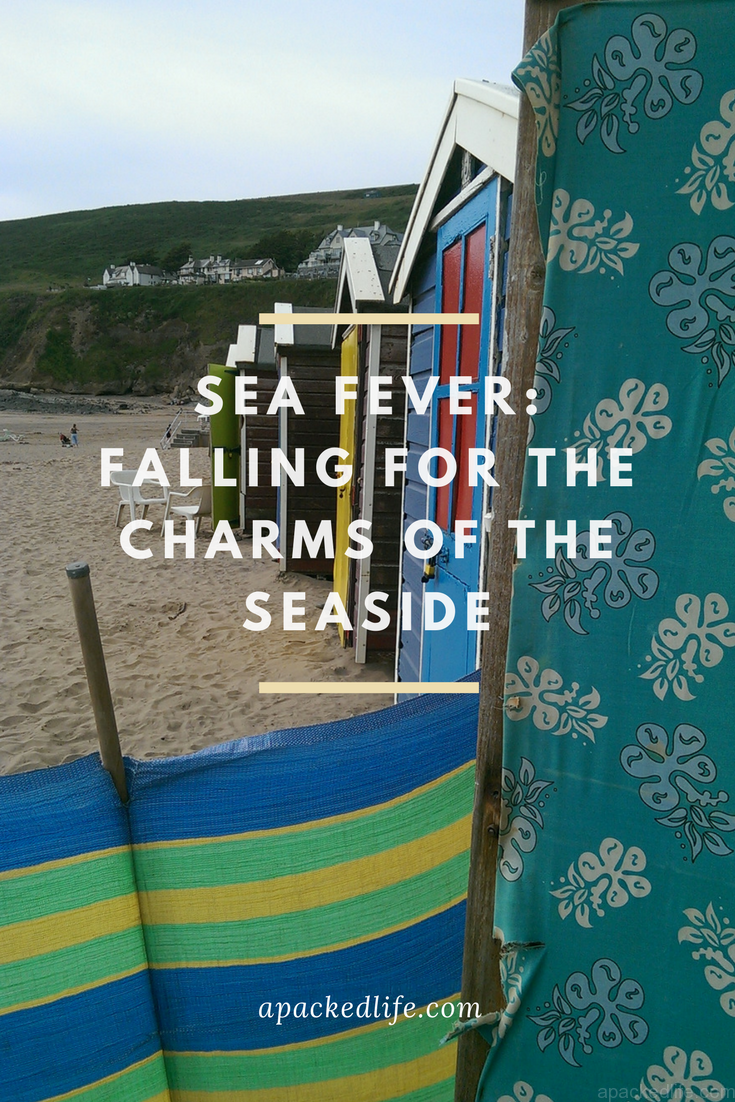 52 thoughts on “Sea Fever: Falling for the charms of the seaside”