Sometimes life in the middle of an island can have you longing for the sea.  I grew up near the beach, and little pleases me more than getting back to the coast.  With a birthday to celebrate in December, we found a mini cruise to get our dose of salty air.  The first piece of illustration artwork I saw onboard – take me to the ocean – summed up my feelings perfectly.

Take Me to The Ocean: Last Minute Booking

We’ve taken similar last minute cruises before.  This year, as always, we had a Plan B for our travel arrangements just before Christmas.  We were happy to wait and see if prices reached a bargain level before booking.  Our intention was to see who blinked first, and with a peak price of over £600 the week before sailing, we were starting to assemble arrangements for our alternative option.  Then a husband arrived, beaming, at my desk.  “They blinked.  It’s £150 each.”  And he scuttled away to book immediately.

Take me to the Ocean: Mini Cruises

Our first mini cruise was more than ten years ago.  We weren’t at all sure about the whole business of cruising, despite being lovers of the sea, boats and even ferries.  Like most people, we’d heard the saying that cruising was for the “newly wed, over fed and nearly dead”.  As we met only one of those criteria, we had some reservations.  So, hearing of a cruise fair at a local hotel, we set off to suss out not just the potential for a cruise, but the potential for us to have things in common with fellow passengers.  And seemingly by accident, we arrived home with a two night stay on the Queen Mary 2 booked.

Take Me to the Ocean: If you’ve Never cruised

You might be wondering what to expect.  For that I’ll refer you to some posts here.  I’ve talked about our first cruise on the Queen Mary 2, and also about things that might surprise you about cruise ships.  There’s also help on the various types of cabins and what might suit you.

Each cruise line has a different demographic, and you’ll find a different group of passengers on a mini cruise to a longer voyage.  It’s generally younger, more party focused and sometimes with more groups of family and friends travelling together.  Don’t forget that your fare includes your meals and entertainment, although drinks and facilities such as the spa are extras.

If you are taking a mini cruise, I think that the choice of cruise line in many ways matters less.  In just a couple of days, there’s less time to appreciate the significant differences in facilities, entertainment, food and cabin choices.  You’ll probably, like us, be caught up in the excitement of heading away to the places you love while on board your mobile hotel.

Take Me To The Ocean: Our Ship and Our Trip

The cruise we booked was on the MV Columbus, now owned by Cruise and Maritime Voyages.  She has accommodation for 1400 passengers, making her a medium sized ship among cruise liners.  That is a great option for a short cruise.  She is big enough to have plenty of choices for spending your time  on board, while being small enough to dock into more central ports.

The itinerary this year saw us sail late afternoon from London Tilbury, heading to Amsterdam the next day and Zeebrugge (for Bruges, or indeed most places in Belgium) the day after.  The final night is at sea, bringing you back into Tilbury the following morning.

Short cruises sailing from the UK tend to last between two and four nights.  Destinations include Hamburg, Rouen, Cherbourg, Amsterdam, Antwerp, Zeebrugge and Honfleur.  You can also take short cruises originating in other countries, for example out of New Orleans, Miami or Galveston in the USA.

Take Me To The Ocean: The Onboard Experience

We had a two hour journey to London Tilbury Port, and with a brief stop, we arrived pretty much spot on our boarding time of 2pm.  We left our car in the long stay at the port, and took the shuttle bus to the ship.  Embarkation was breathtakingly quick: just fifteen minutes.  That included passport control and pictures taken for our ship cards.   It’s a cashless environment, with all purchases being charged to your onboard card which is also your cabin key.  We went straight up to the top deck restaurant for a late lunch. 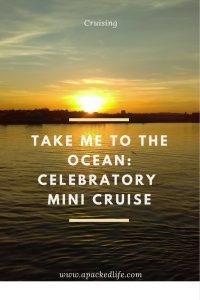 Cruise And Maritime Voyages takes the safety procedures very seriously.  Before we left port, we were told to wrap up warm, pick up our lifejackets from our cabin, and assemble on deck for the muster drill.  Everyone gets checked off against the list for their particular lifeboat, and you must attend for the safety briefing.  In truth, it’s reassuring to see how much effort and energy is involved in keeping everyone safe.

It was after the muster drill that I spotted the sign which forms the title of this post.  It’s captured on a window on the lifeboat deck, and seemed to sum up why we’d found ourselves on a breezy deck in December.

Take Me To The Ocean: Evenings Onboard

On the first night, we found our table allocation for the later sitting at dinner.  There are shows each night, but they tend not to be our kind of entertainment.  Instead, we found a bluesy guitarist on one of the bars, and listened to him for a while.

Dinner found us part of a table for six, and there were around six choices for each course (starter, soup, salad, main, dessert, cheese).  If you’re horrified at the prospect of that much food, don’t be.  The portions are small, and you can skip as many courses as you like.  We ate lots of fish, including tilapia, sole and salmon, salads and plenty of soups.  If you have food allergies, as I do, you’ll find this ship has lots of choice.

If you’re concerned about the dress code, don’t be too worried.  Ships vary in their level of formality, but if you don’t want to get dressed up at all, there is informal dining on the top deck.  On this particular ship, we found a suit/dress absolutely fine for the most formal night.

Then it’s up to you what to do with the rest of your night.  We found a well-stocked library, enjoying the luxury of just chilling out and doing nothing.  We also stopped off in some of the bars.  You’ll find the spa open reasonably late in the evening too, although as we were doing a lot of walking ashore, we didn’t worry about getting to the gym.

Take Me To The Ocean: The Ports

Columbus and her sister ship Magellan are both small enough to dock in the centre of Amsterdam, berthing about 5 minutes walk from Centraal Station.  I’ve visited on bigger ships, like P&O’s Azura, and docked further out of the city.  One of my favourite parts of the trip is being up on deck early to see the ship make its way from the sea lock up to its berth.  The views are spectacular, and it’s great to see all the port traffic as Amsterdam awakens. 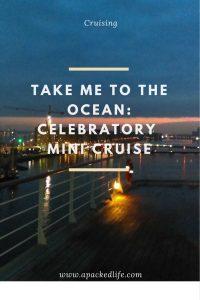 Docking in Amsterdam at sunrise

You’re in port for around 8 hours, so there’s plenty of time to explore.  Previously, we’ve headed canalside, but this time we walked from Centraal Station down to Dam Square and beyond, appreciating both the architecture and a lot of art. 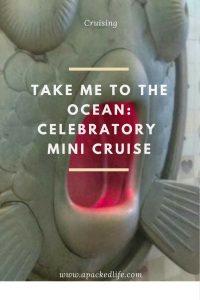 A rather splendid fish sculpture in an arcade near Dam Square, Amsterdam.  He could have taken a bite or two out of me if so inclined.

Our second port of call was Zeebrugge.  Here we had a very long time in port, docking at 8am, and needing to be back on board by 9.30pm.  This left a lot of time to get to pretty much anywhere you wanted in Belgium.  Our table mates went variously to Bruges and Brussels with a stop off in Ghent, while we took the coastal tram to explore for the day.  Despite a lot of sea fog, it was a great day. 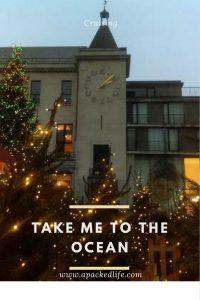 The astrological clock at Ostend, less than an hour from Zeebrugge

Take Me To The Ocean: Disembarkation

After our long day on the Belgian Coast, which you can read about here, we took it easy that night with dinner in the top deck restaurant and a drink in the bar with more music.  We wandered the ship a while, which is an interesting experience in itself, seeing what entertainment was available in different parts of the ship.  A team from the galley was setting up an edible nativity scene on the stairs.  We had to leave via those stairs the next morning, and I was definitely concerned to keep my bag away from harming a wise man or two. 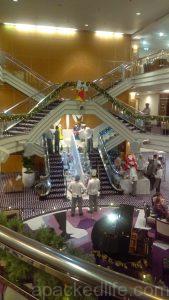 Chefs pondering the setting up of the edible nativity, Deck 6 Columbus

The ship arrived on time into Tilbury, and we were asked to vacate our cabins early to allow them to be readied for the next passengers.  We had breakfast, and then found a spot to sit and chill, catching up on the world, before our cabin numbers were invited to disembark.  Again, we were quickly off the ship, although not quite so quickly back to the car park.

Take Me To The Ocean: Taking a Mini Cruise

If you’ve not taken a cruise before, it’s worth keeping an eye out for last minute offers for shorter cruises.  They can be very good value for money (around £50 a night for ensuite accommodation and all meals and entertainment onboard).  If you are accustomed to traveling independently, don’t dismiss it out of hand.  We organise all of our own trips save for cruises, and sometimes it’s good to have someone else sort things out.  It’s also a great option to try out destinations to see if you’d like to return at a later stage to explore in more depth.

For reviews of individual cruise lines and ships, try Cruise Critic.  You’ll get a sense of what each line has to offer.  Amsterdam’s port information is here, and you’ll find more about Zeebrugge here.

18 thoughts on “Take Me To The Ocean: Celebratory Mini Cruise”