It’s a tough job auditioning the best beaches in Wales.  There were just so many contenders, and I had to sit down with a proper paper map for shortlisting.  I’ve tried to look for beaches that meet different needs.  You may already have heard me say that there’s a beach for every reason and every season.  Sometimes you want isolated beauty, big skies and a long walk with the sea air in your lungs.  Sometimes you want warmth on your bones, children laughing at the water’s edge and a bag of chips for your tea.

So here’s my collection of some of the best beaches in Wales.  I say some, because I haven’t yet been everywhere.  But it is, as they say, most definitely on my list.  Dive on in… 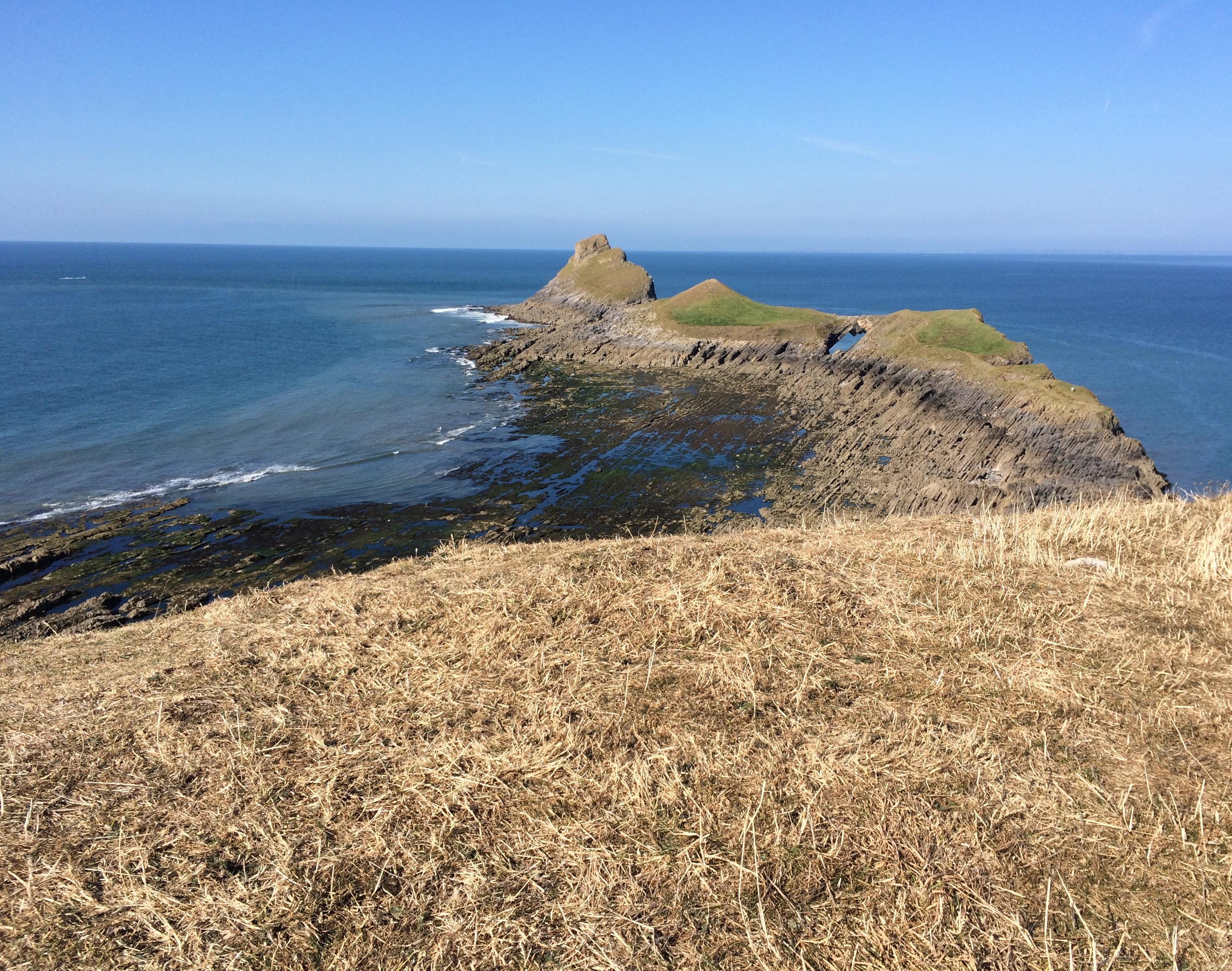 Voted Wales’ Best Beach for 2018, Rhossili is three miles of beautiful sandy shore on the Gower peninsula.  It’s a great mix of big breakers suitable for surfing, and your classic sandcastle-building beach.  It’s also a dog friendly place, so great for walking with both feet and paws to enjoy the beach, Worm’s Head and the cliffs.  Seals and dolphins have both been spotted there.

Rhossili Bay is part of the Gower Coast Path.  You can reach the bay by steps from Rhossili village, or else take the flat route towards the Coastwatch Centre.  If you’re walking across to Worm’s Head, be aware of the tide times; it’s also recommended that you check in to the Coastwatch Centre. 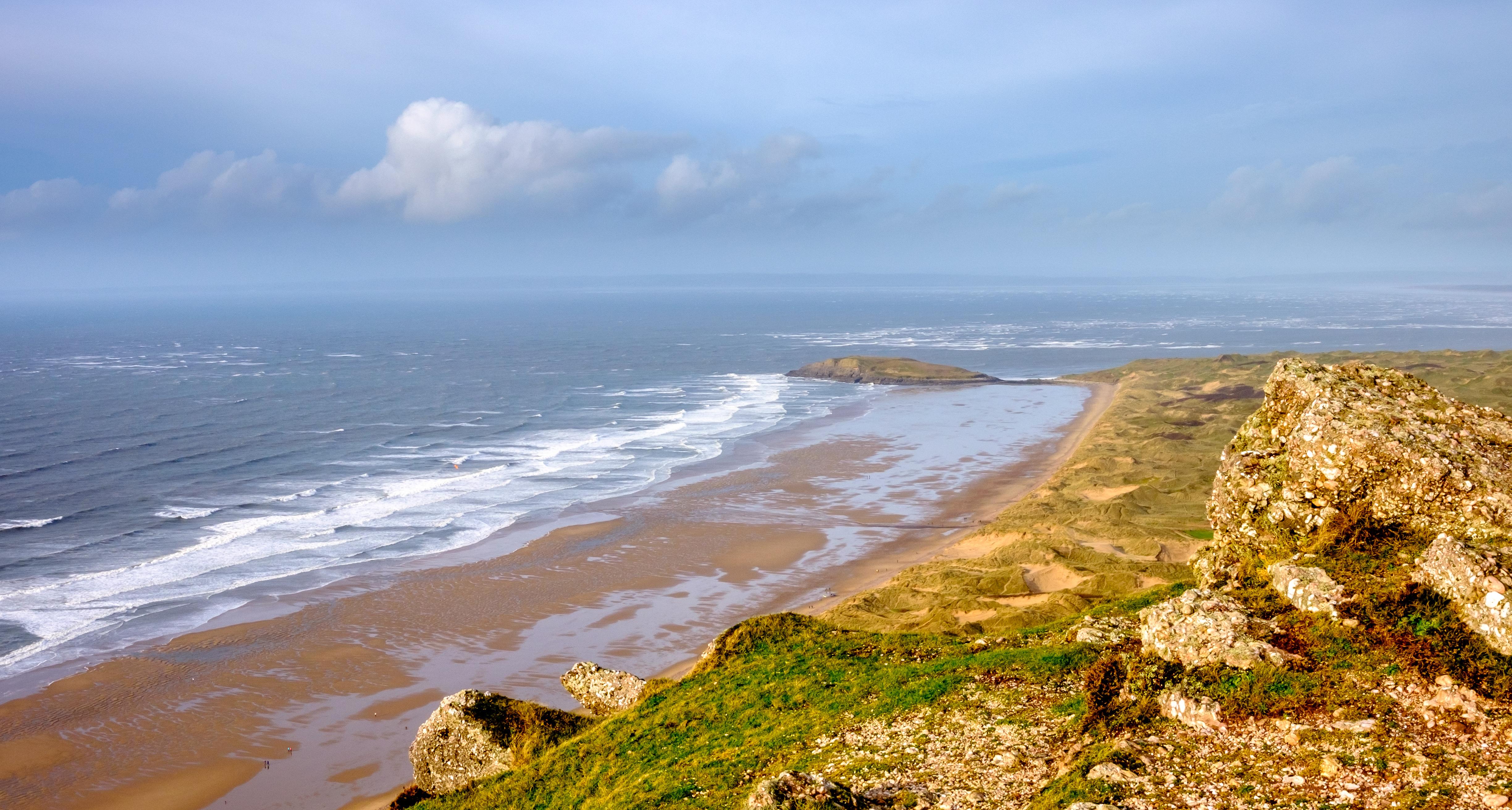 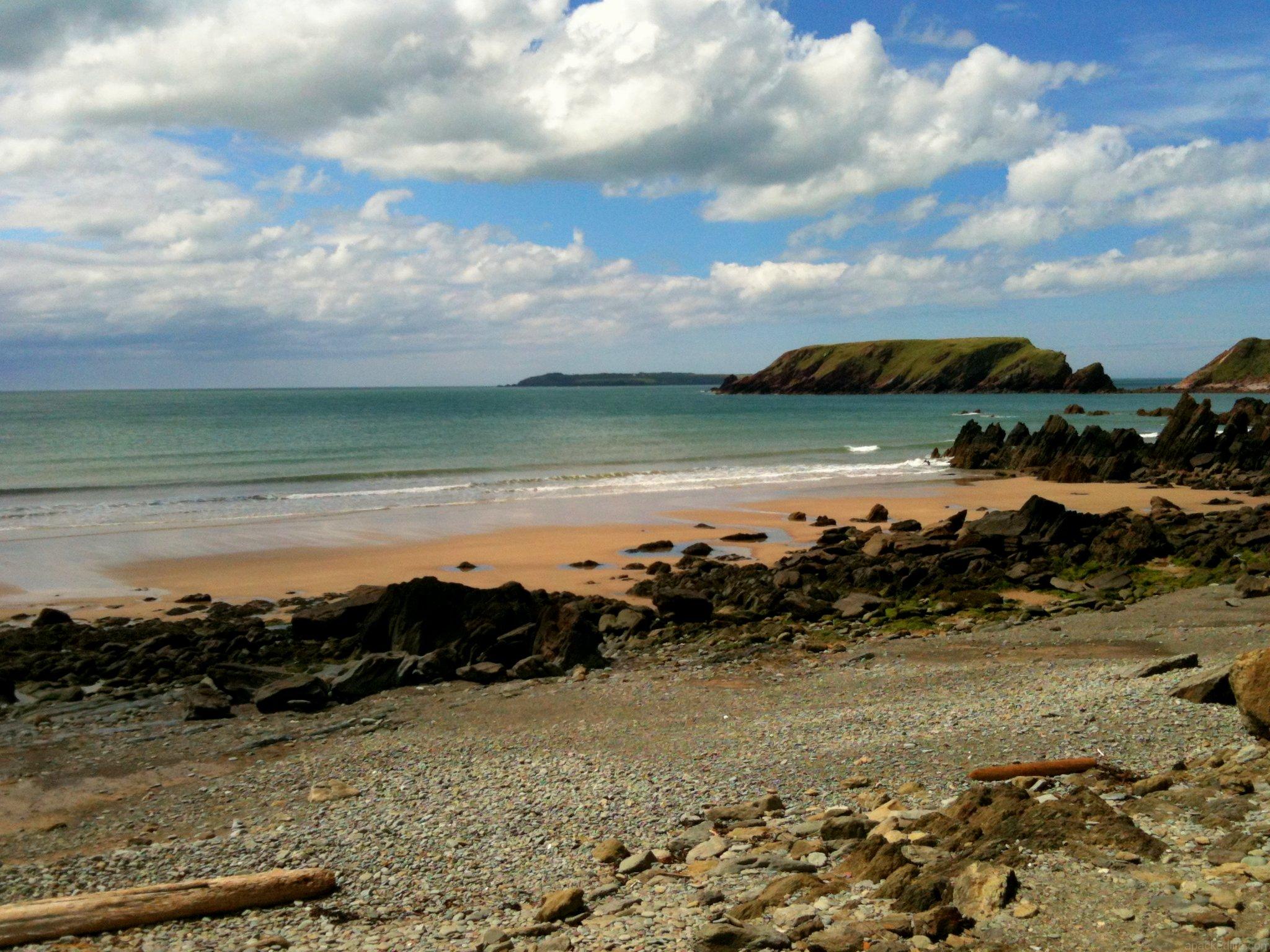 Marloes Sands is just under a mile of gently curved remote sandy bay in Pembrokeshire.  It’s surrounded by cliffs, and from the sands you can spot Skokholm Island and Gateholm Island.  Park up at the National Trust and you’ll find a track leading from the main road to the beach.

There are three ways to access the beach: the main way from Runwayskiln, plus the north route near Gateholm Island involving some rock scrambling, and the route to the south that has steps to the beach. 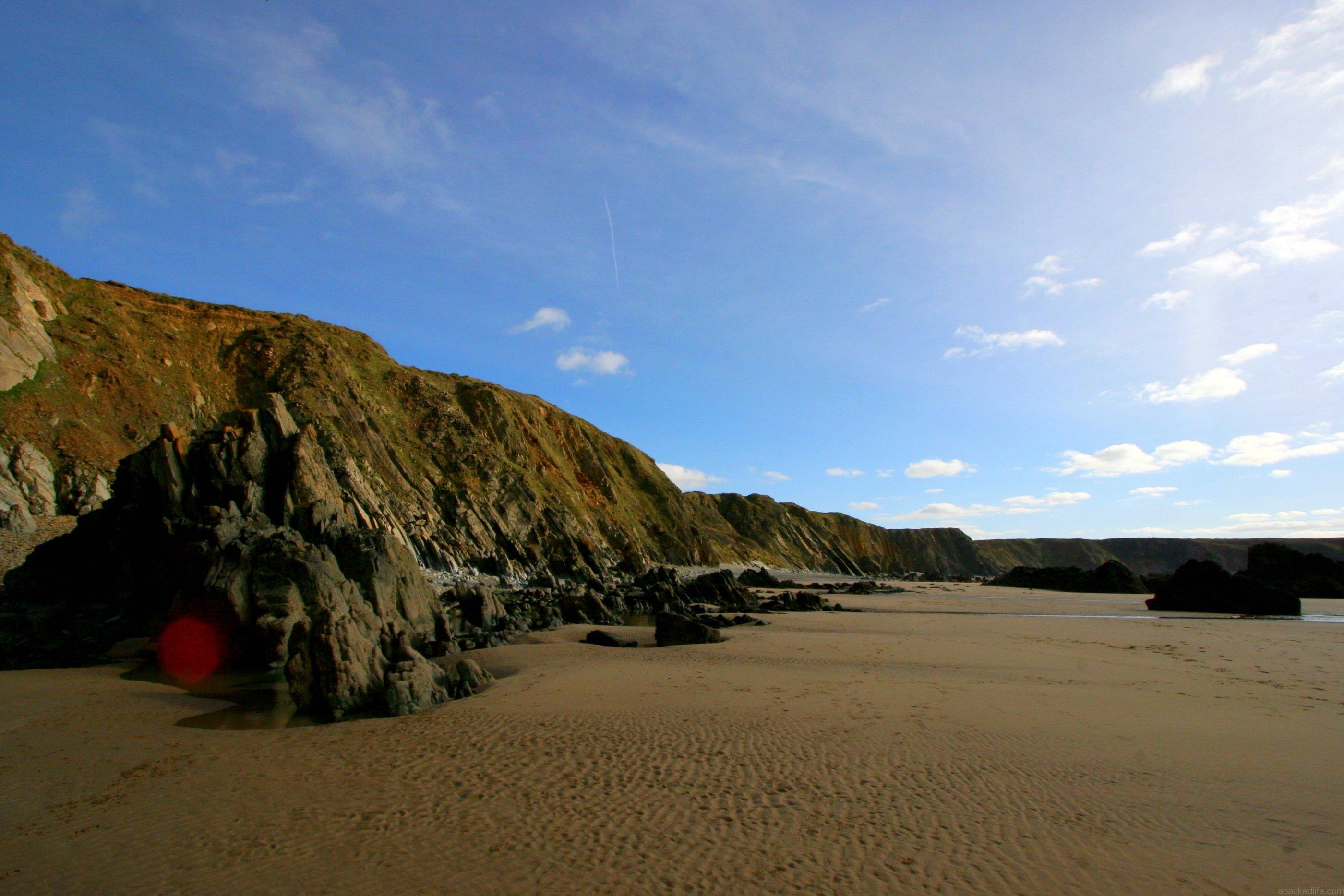 From the beach you can see the Three Chimneys, three vertical lines in the cliff made up of sandstone and mudstone.  A fourth chimney gave itself up to a storm in 1954. 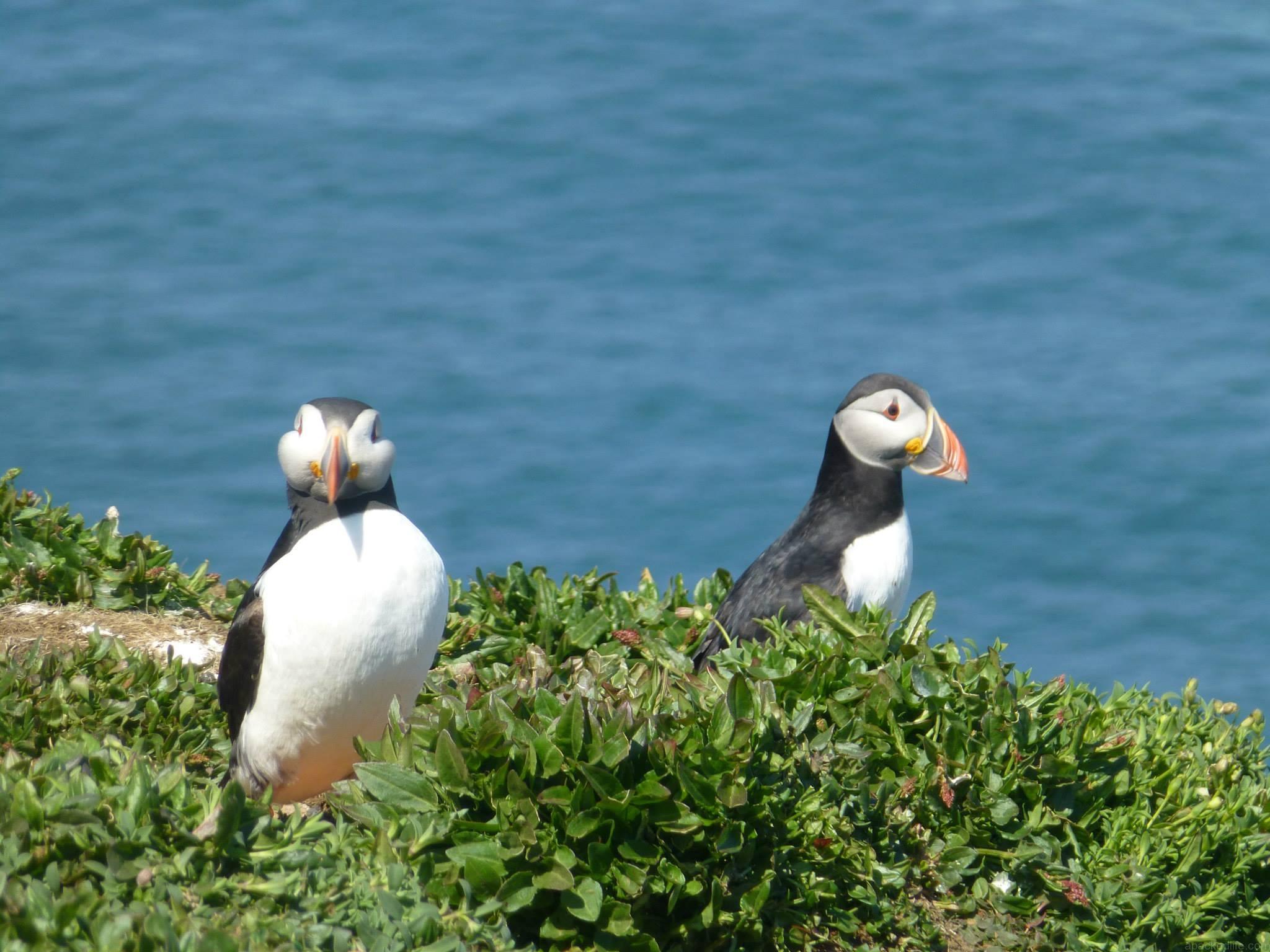 The nearby village of Marloes and St Brides had a population in the low hundreds at the turn of the century.  It is surrounded on three sides by sea, making this a beautiful spot within the Pembrokeshire Coast National Park.  Close by, you’ll also find the island of Skomer, famous for its seabird population including puffins and Manx shearwaters.  You can reach Skomer by boat from Martin’s Haven.  Grassholm island is home to a colony of gannets.

Best Beach To Take A Walk On The Wild Side: Three Cliffs, Swansea

Three Cliffs Bay is backed with sand dunes, salt marshes and the three limestone cliffs.  It’s also part of the Gower Coast path, and is situated on the south coast of the Gower Peninsula.  The Three Cliffs themselves are limestone and are regular climbing routes, especially Scavenger, which is regarded as a classic. 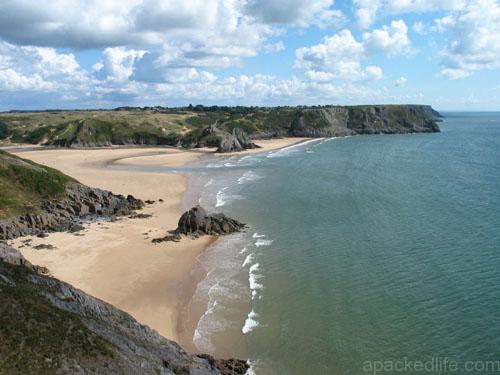 Pennard Pill, a large stream, flows into the sea in the middle of the bay.  Look up beyond Pennard Pill to see Pennard Castle.  It was built in the early twelfth century and is full of legends about fairies.

Bring your picnic and set forth for a stroll.  Bear in mind that there are no places to get refreshments on the beach; you can stock up at nearby Parkmill or Pennard. 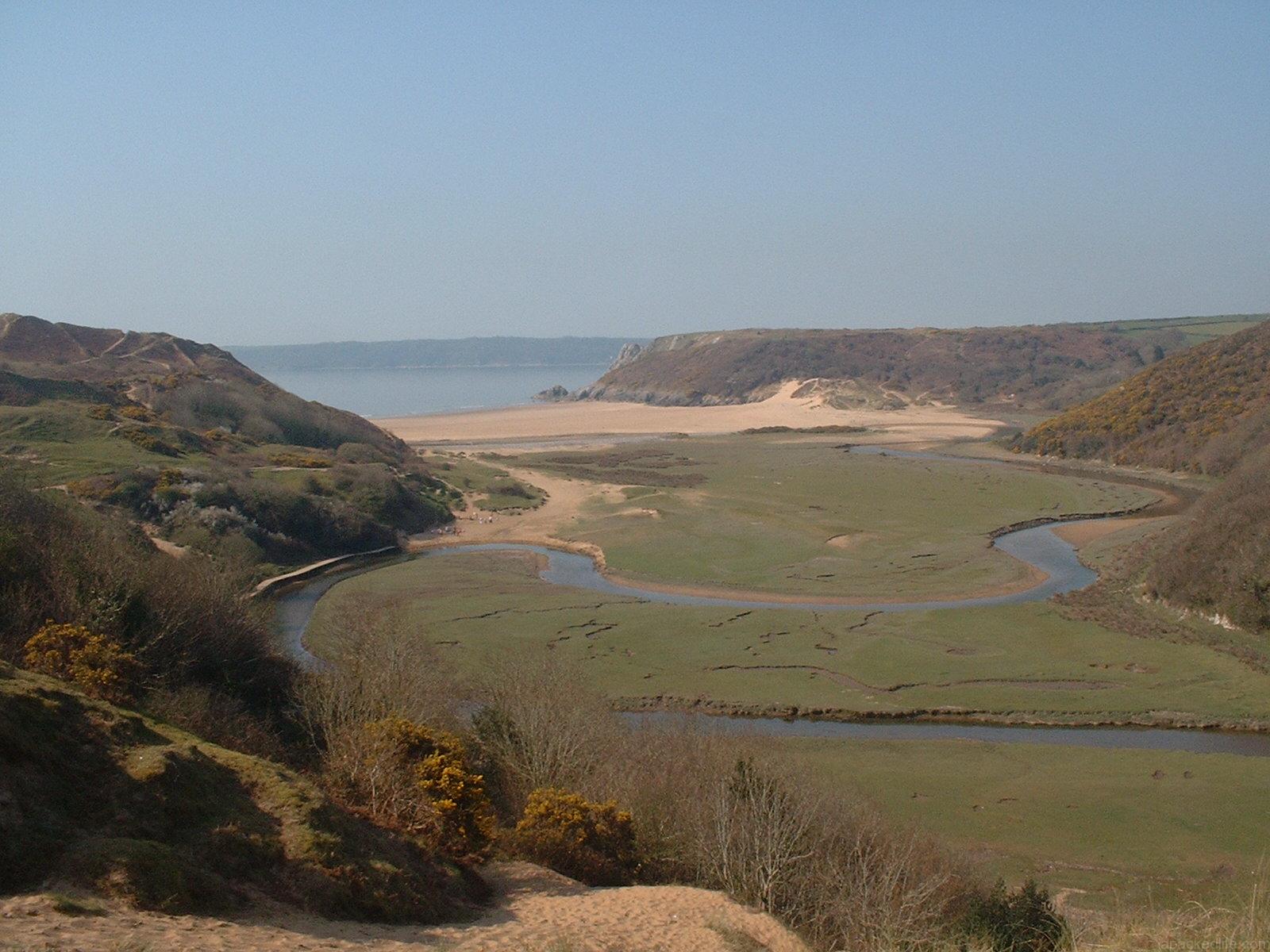 There are individual beaches in this bay which are separated at high tide, but accessible to each other at low tide on foot over the sands.  You can reach Pennard Burrows to the north, Pobbles Bay to the east and Tor Bay to the west.  Three Cliffs Bay is also part of the inlet of Oxwich Bay, and forms part of the same continuous sandy beach at low tide.

Pennard Cliffs are common land, meaning that local farmers have grazing rights there.  It’s therefore important you keep dogs on a lead in this area.  The cliffs are also known for rare alpine plants, including yellow whitlow grass which is the county flower of Swansea.

You’ll have seen that Oxwich is a neighbour of Three Cliffs Bay.  It’s two miles of long sands, backed by the dunes and nature reserves at Oxwich Burrows and Nicholaston Burrows.  I don’t know about you, but I’m always a fan of Burrows, which make for a great sandy backdrop full of fascinating spots to explore with care. 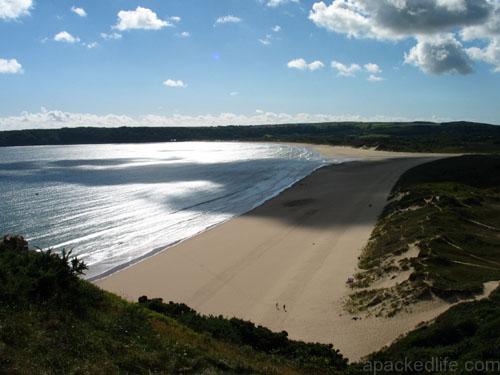 At Oxwich the western end of the bay is the most popular, so keep walking east for more quiet spots.  There’s a car park behind the beach, plus toilets, drinking water, a beach cafe and a general store over the road.  You’ll also find a slipway if you have something with you to launch.

The sheltered nature of Oxwich Bay makes it great for swimming, paddleboarding and kayaking, with watersports tuition being available via the car park.  Dogs are welcome at Oxwich at all times.  I hear that Oxwich has reliable surf conditions in winter when other beaches are too big, with the best times being the hour preceding high tide. 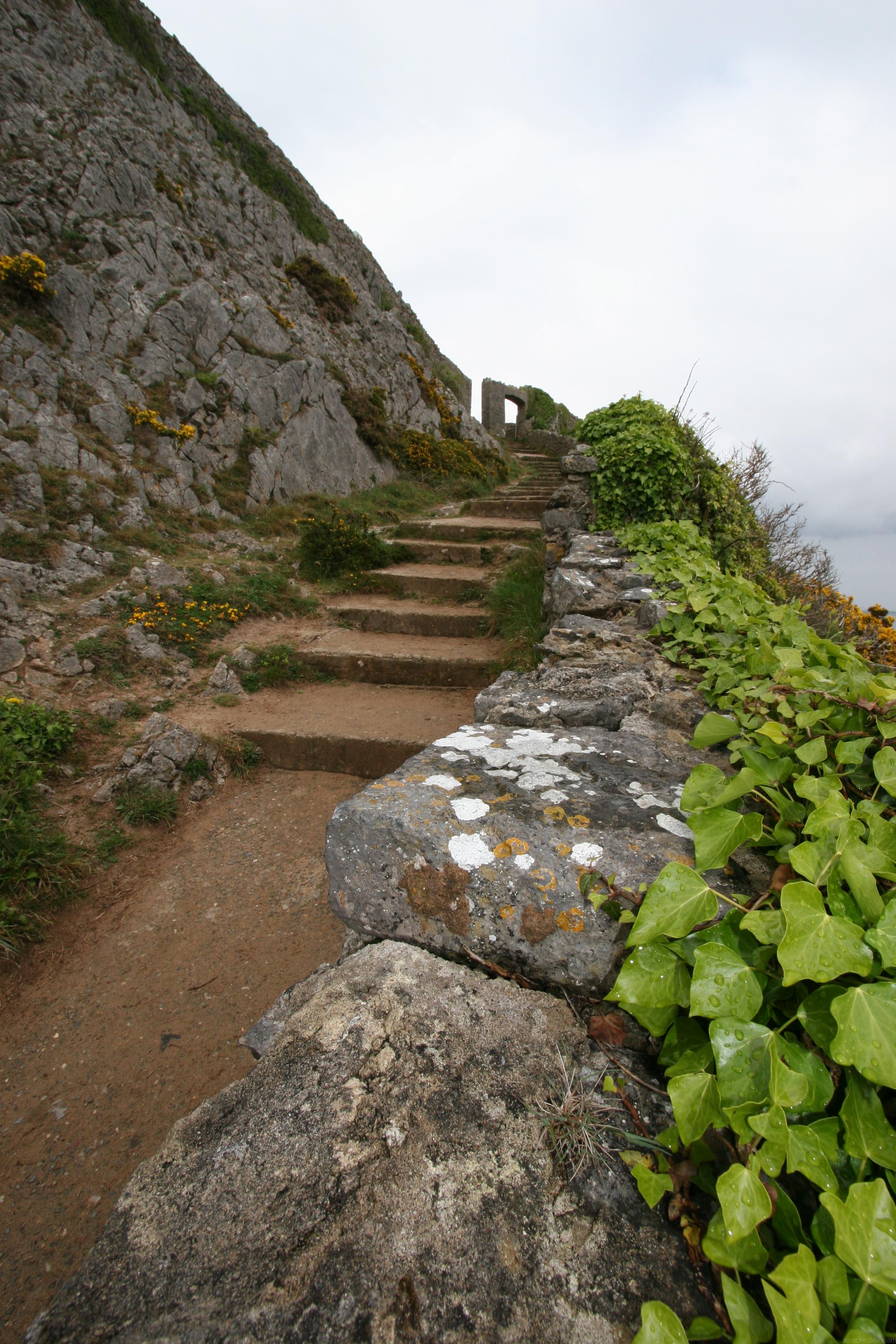 This is a small bay, but my, is it perfectly formed.  Backed by dunes and pines, and accessible only by a half mile walk from the car park, this is definitely worth the effort.  Its isolation means that there are no facilities, so be aware that everything you take in, you’ll be taking back out over the cliffs.  It’s also a good idea to check those tide times. 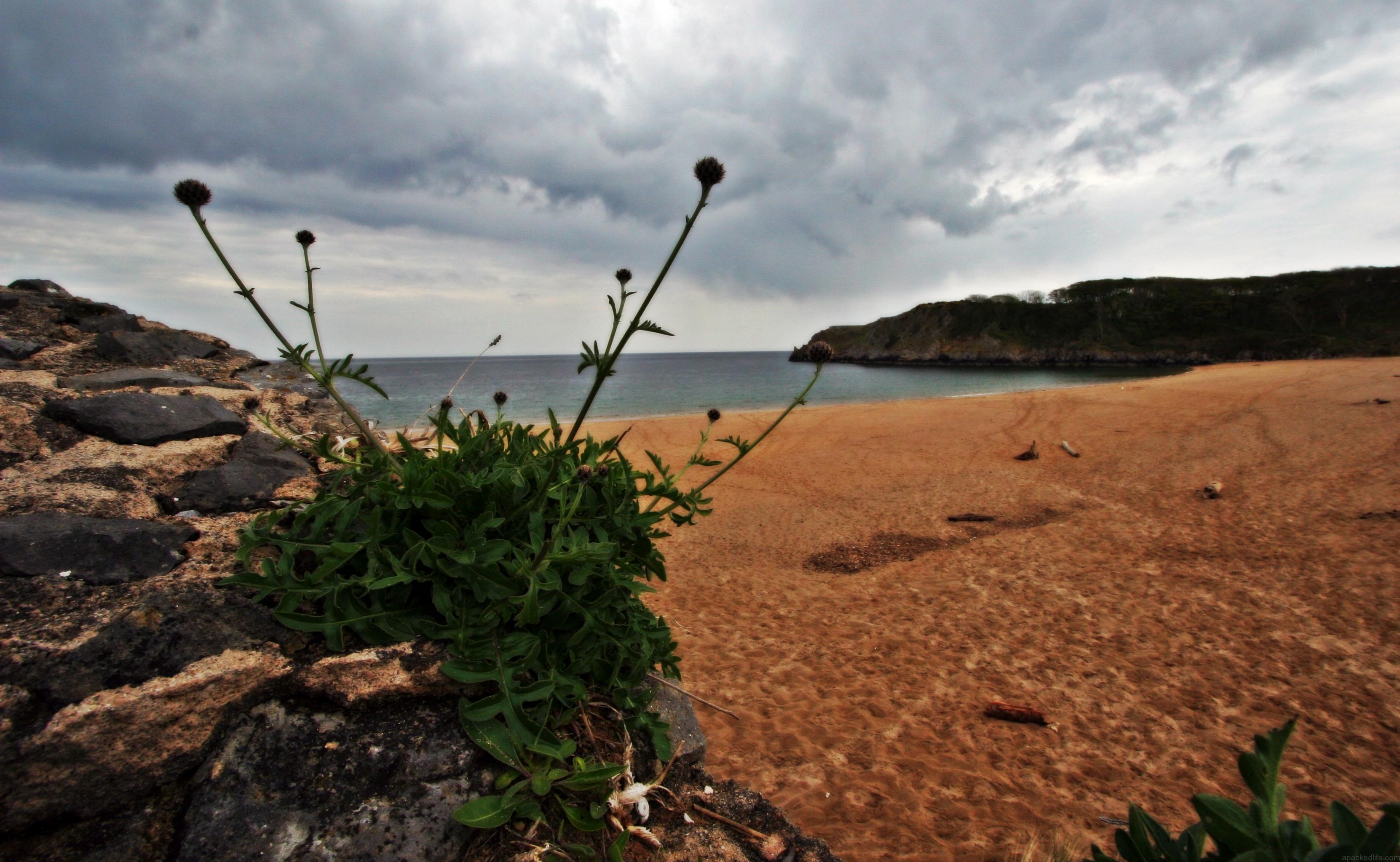 Access to the beach is via that half mile cliff walk with lots of steps from Stackpole Quay, where you’ll find a cafe and toilets.  You can also reach the beach via the Pembrokeshire Coast Path from Broad Haven South, where the walk is close to one and a half miles.   Both approaches are unsuitable for wheelchairs or pushchairs.  There are opportunities to go kayaking or coasteering from Stackpole Quay. 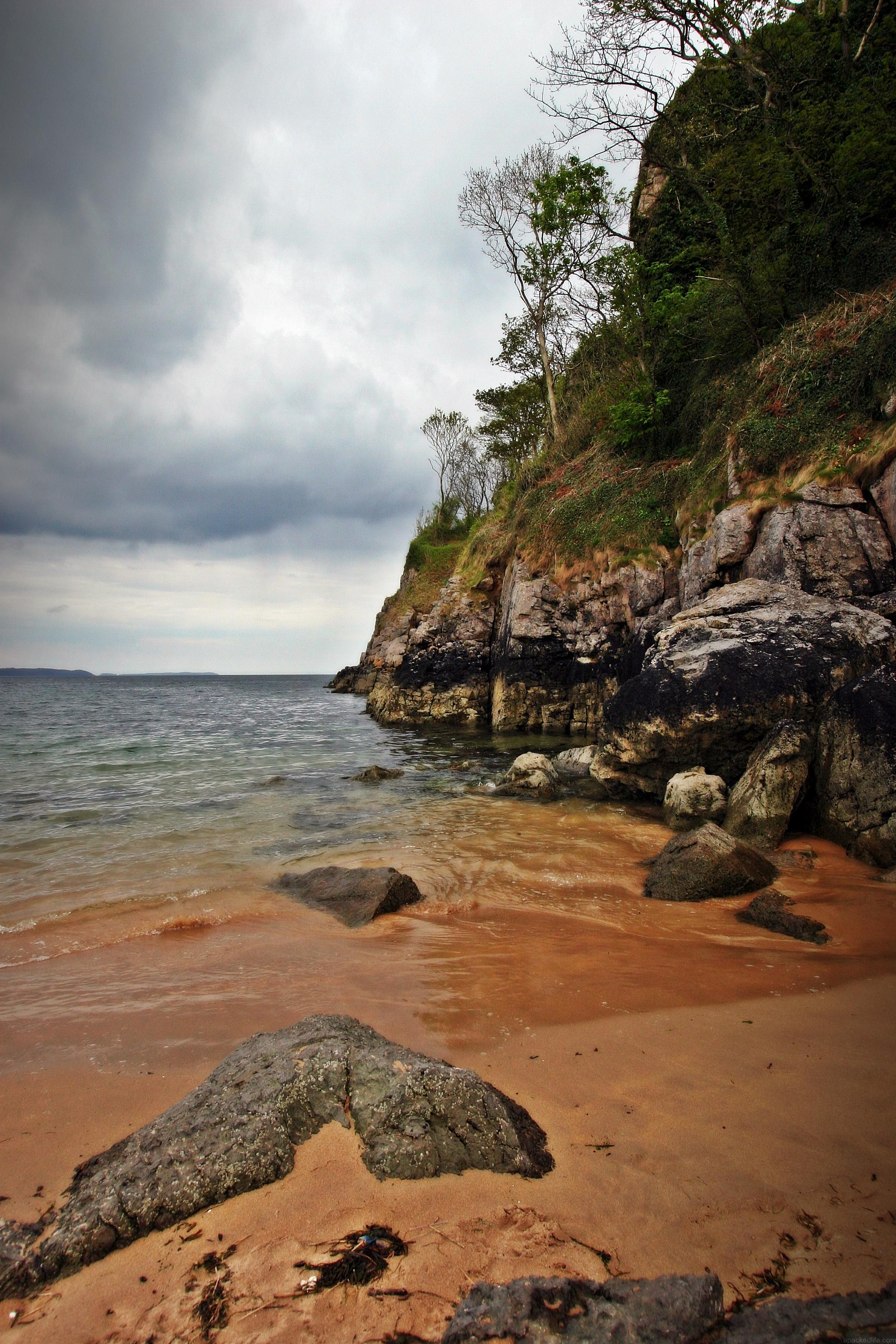 It might be beautiful, but this is still a wild place.  You can see fulmars gliding the thermals over the cliffs, and there’s a wide range of waders and seagulls at the shoreline.  You might spot a peregrine falcon or a gannet, one of around 30,000 on Grassholm island.  If you love coastal flowers, you could spot spring squill, sea pinks, heathers and sea campion on the cliffs.

This one made the list of best beaches in Wales for its niche status as a divers’ haven.   St Bride’s is a truly tiny and rocky cove, nestled into the land.  To the north you’ll find Cliff Cottages, seemingly hanging onto the coast by willpower alone.  An ancient chapel for fishermen on top of the nearby cliff is reported to have been swept away.  Over time, stone coffins have emerged from the crumbling cliffs, freed by the action of weather and waves. 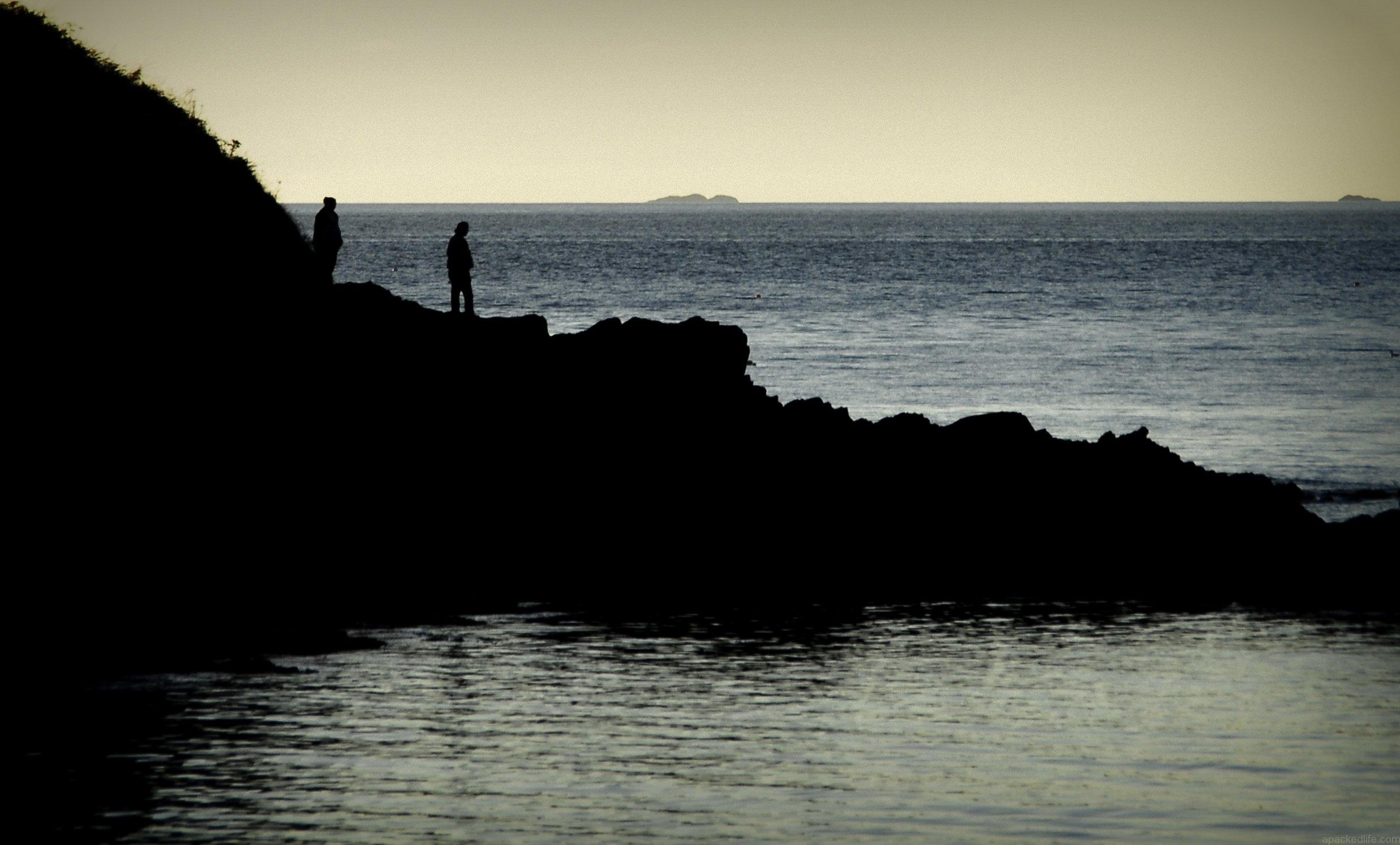 The narrow road down to the cove ends with just enough space for a few people to park by the church gate, right by the shore.  It’s a beach where it’s possible to swim and go rockpooling.  It’s also one of the most popular places for novice sub-aqua divers to practice, as it is so very sheltered. 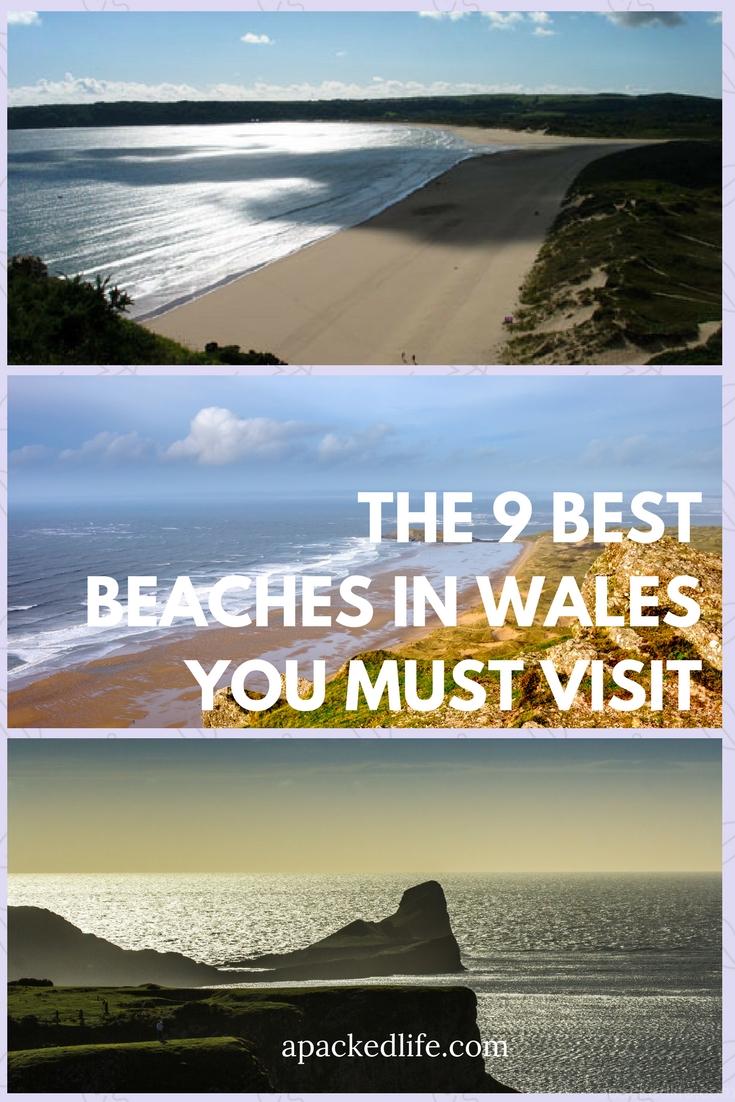 The sheltered sandy cove of Mwnt Beach is owned by the National Trust.  It’s off the beaten track, but can still be busy in summer as a result of being a National Trust property.  It’s approached by a single track road, punctuated by the buzz of a cattle grid.  Then the view opens up over Cardigan Bay. 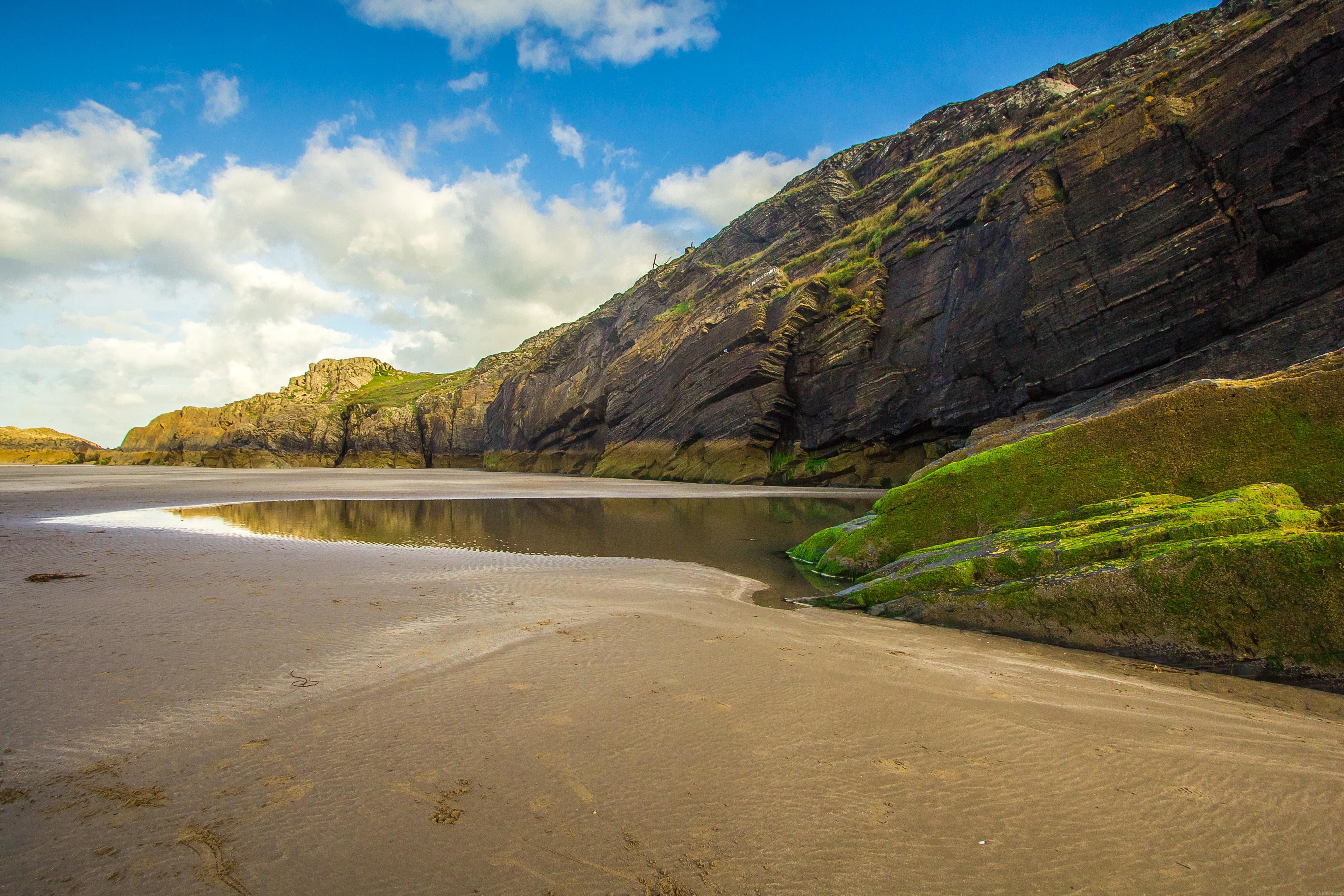 This is another beach with steep steps, making it unsuitable for wheelchairs or pushchairs.  Parking is in a field above the beach.  You can take the path to Foel y Mwnt, a steep conical hill with a viewpoint overlooking the beach.  The Ceredigion Heritage Coastal Path runs along the cliff above.  Coastal wildlife is plentiful here, with dolphins, seals and porpoises in summer.

Best beach For A Big Day Out: Barmouth

Barmouth lies within the south west corner of Snowdonia National Park, and it’s a town with plenty of history.  The old town is full of steep steps and slate-roofed cottages, reflecting its connections to the slate industry.  Beloved of Victorians and Edwardians on their summer holidays (brought by the new railway), Barmouth gave those early visitors as splendid a time then as it does to visitors now.

Barmouth made the list of the best beaches in Wales for its accessibility to visitors from outside Wales, and also for its proximity to glorious walking.  Barmouth beach is a massive sandy expanse, big enough to find a quiet spot even when it’s busy. It’s full of the classic things to see and do at the beach, including amusements, shops with beach toys, and gently sloping sands for your castle building empire. 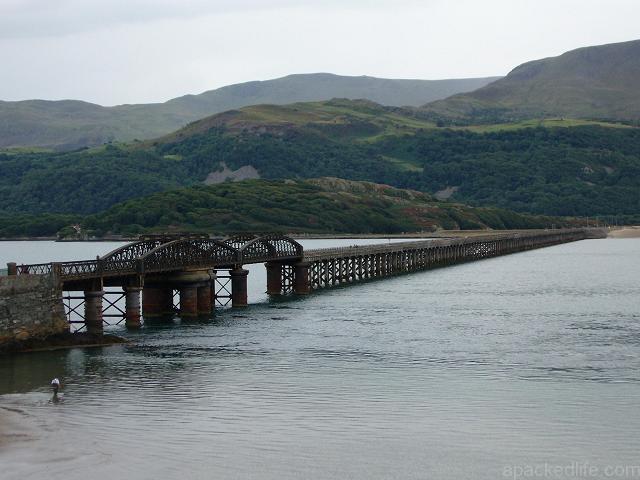 There’s also a very long bridge spanning the river estuary, which is the perfect venue for an evening walk while boat spotting.  The Mawddach estuary is truly beautiful, and great for wandering, finding inner peace and watching birds.  You should definitely be sure to remember your camera.  If you love walking, there’s a festival in September which makes the best of all the local walks here, on both hills and mountains.

Best Beach For Fun On The Pier: Aberystwyth 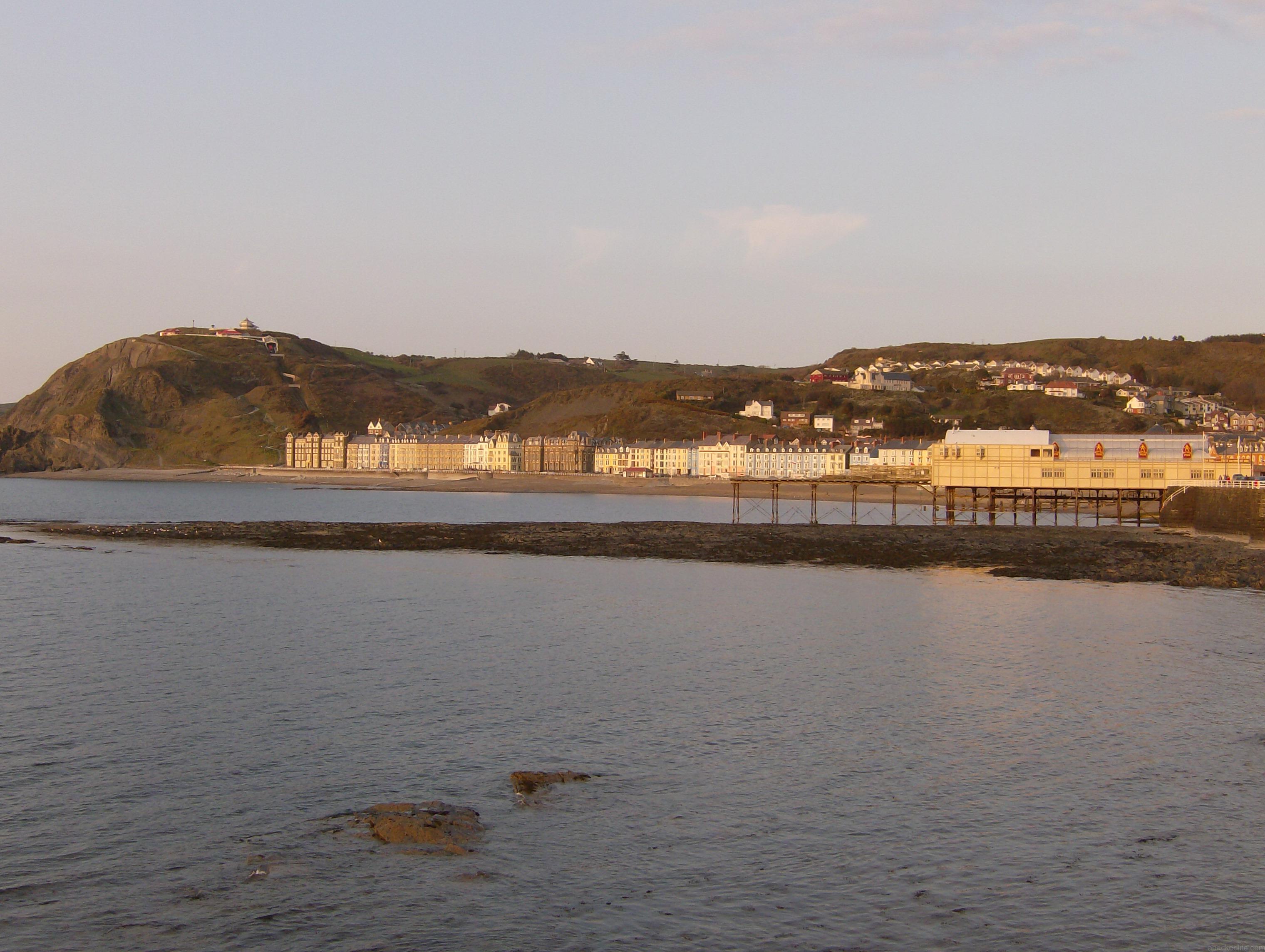 The university town of Aberystwyth has a mile long promenade alongside the dark sand and shingle North Beach.  Walk to Constitution Hill at the quieter north end and you’ll find a cliff railway with the largest camera obscura in the world.  On a clear day, you can see much of North Wales from the beach, including the peaks of the Llyn Peninsula and Snowdonia. 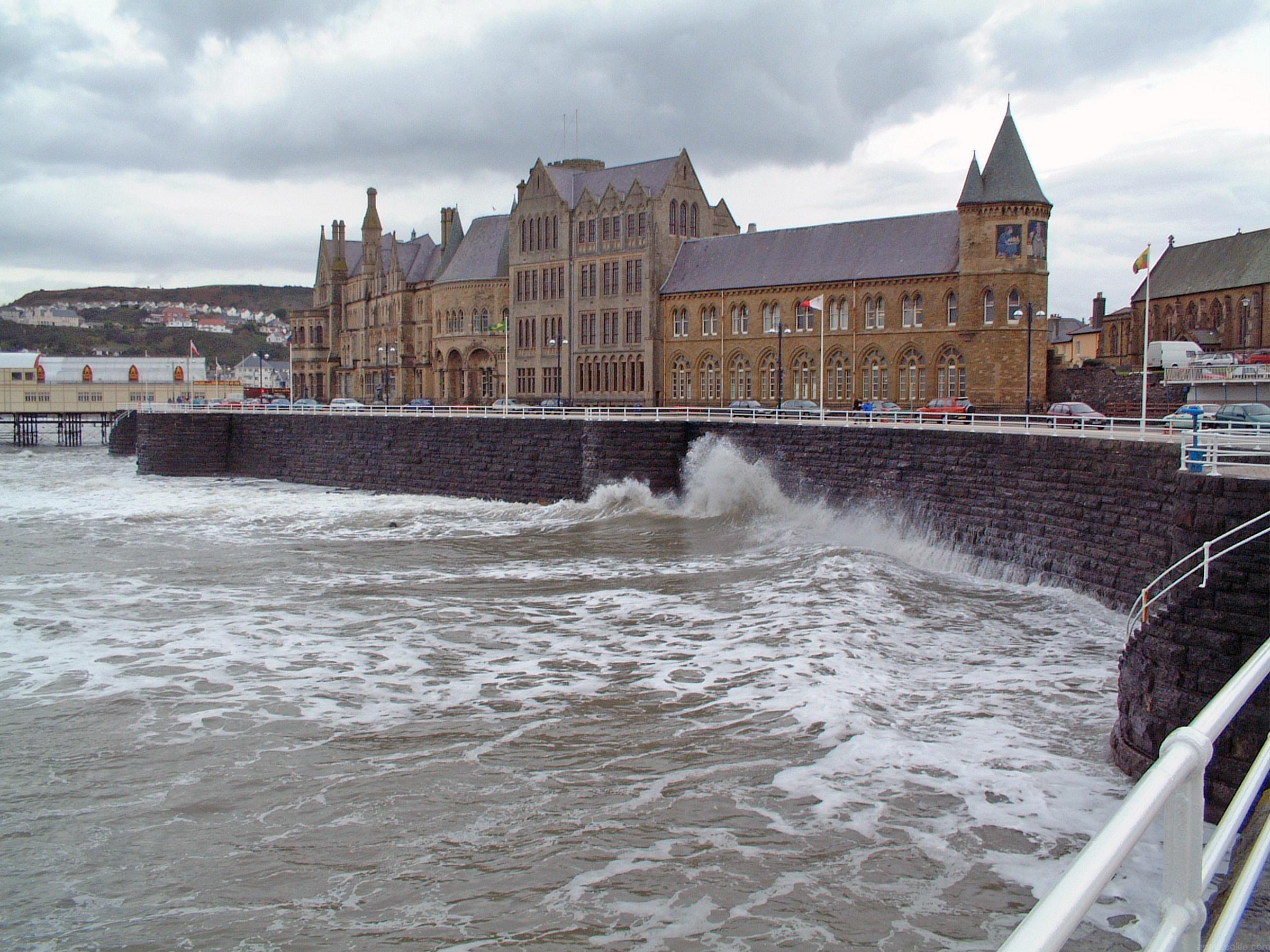 North Beach made the list of the best beaches in Wales for two reasons linked to its pier.  The Victorian pier was built in 1864.  Originally it was 242 metres long, but time and the action of wind and waves have reduced it to 90 metres of amusements and seaside fun.  If you’ve never been to a seaside pier, you really must.  It’s such a very classic way of enjoying the coast, whether you’re a demon at air hockey, or if you just want your fortune told by a somewhat inaccurate machine with lots of bumpy bits that run over your hand.  There’s a stunning and unexpected bonus to the Pier.  From November to March, it is home to a starling roost, and you can see the murmuration at dusk.

Of course there are plenty more beautiful beaches to discover in Wales.  High on our list has to be one Welsh favourite where you can explore castles and islands and even meet the local ghosts; you can see the best things to do in Tenby here.   I checked out the best beaches in England too. You’ll also find me in thrall to sea fever, and exploring the delights of the coasts of Devon and Lancashire. 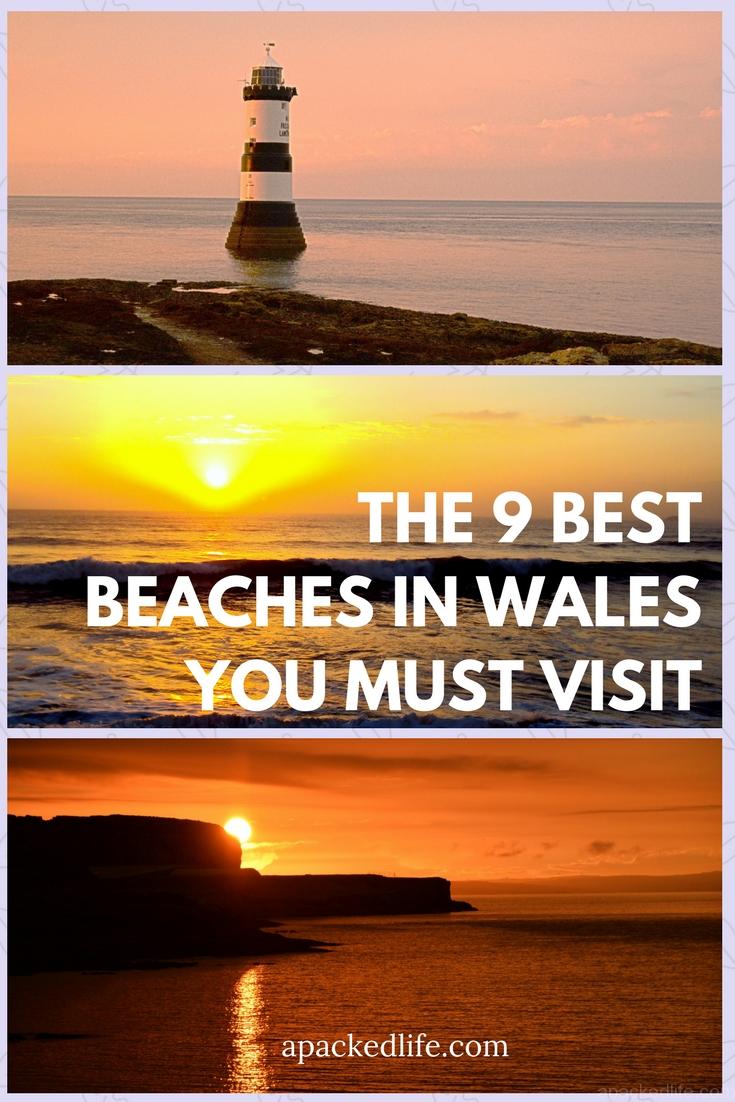