We had a scant two days in St Petersburg.

Although taking on Russia without a guide is much, much easier than it ever used to be, we’d engaged the services of a tour company.  We were desperate to pack in as much as we could.  You join us midway through the morning of our first day.  Firstly we took a tour of the Metro, and then a boat trip on the Neva River on the characterful Juliet.  You can read about us messing about on the river here.

Once Juliet had deposited us quayside, we crossed the road to take the hydrofoil across the Gulf of Finland to Peterhof.  The water was like pure unrippled blue glass as we set out, the whole serene experience a total contrast to the wallowings we’d experienced on the Neva. 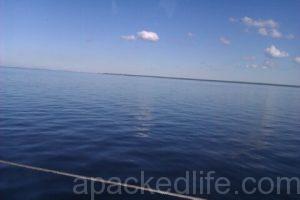 View from the hydrofoil

Arriving at Peterhof, we walked down a long jetty.  You can see why Peter the Great wanted a home here.  The views were totally spectacular.

It’s a long walk up to the Palace.  We weren’t planning to stop there, just to visit the gardens.  But the walk itself was magnificent, full of fountains and vistas.  We passed people in period costumes posing for pictures, and stopped to listen to a horn orchestra, with each horn being responsible for a single note. 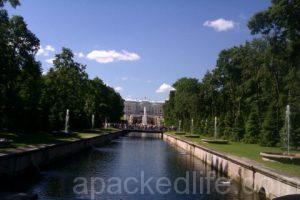 The long and beautiful walk up to Peterhof from the dock

Then there were the trick fountains.  This was probably my favourite part of the visit.  The fountains sat below beautifully ornate trees, with stepping stones to cross them.  In each fountain, one single component, whether a stone, leaf or other device, would trigger that fountain, soaking the unwary visitor. 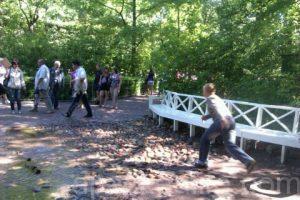 Running through the trick fountains at Peterhof

Walking round the park at the height of summer visitors suddenly see some beautiful tulips under a shady “oak tree”. They bend down to take a closer look, and jets of water suddenly shoot up at them from the flowers. They step back hurriedly under the oak tree, only to be greeted by further jets from the leaves and branches, which are made of hollow pipes. The visitors flee to two welcoming benches nearby, but jets of water shoot up from them too inscribing an arc, that gives them yet another soaking.

This was Peter’s thing.  He liked to laugh, and he liked to laugh by tricking people.  It is said that his trickery included providing porcelain apples after dinner, mixed in amongst the real ones.  Whether he paid the dentistry costs of those afflicted is not recorded.

Lunch at The Summer Palace

I doubt it was the real summer palace, but lunch here was an experience.  It’s been a while since I ate something so utterly foreign to my tastebuds that it was delightful.  We had some sharp vinegary salad to start, then a version of Kiev, but not as we know it.  The parcel was crunchy, crispy and without an outpouring of butter, although there was plenty of garlic in the mix. 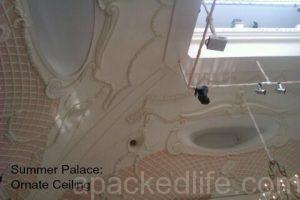 Downstairs, the toilets were works of art.  Every cubicle had an ornate mirrored door, and the basins were like something from a magazine spread.  In fact you could barely move for the efforts that were needed to keep fifteen myriad reflections of yourself out of someone else’s photo. 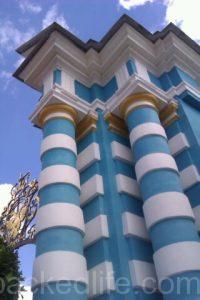 The stunning gateposts at Catherine’s Palace

I’m a sucker for blue.  And when we arrived to find the intensely cerulean blue gateposts of the Palace, I was hooked.  Even if we couldn’t go in for a while, as it was not precisely 2pm. 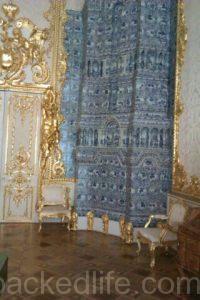 This is a Palace on a truly human scale.  The rooms are small enough to feel as though you could actually live in them.  There were beautiful marquetry floors (protected from our feet by blue Smurf shoe covers) and Delft stoves imported at great cost from the Netherlands.  There was an impressive portrait wall.  We saw some of the fashions of the time too, and marveled at the extensive skirts that needed to be manovered through doorways.    But, ah, those blue gateposts and the beautiful gates.