Meandering happily along the quay, we decided to start searching for somewhere to have lunch later.  We’d arrived in Cherbourg the day before, with me tagging along on a business trip.  My stepfather, henceforth known as SF, had lived in France for many years (mostly in Paris, and with Dylan Thomas, but that’s another story).  He had an encyclopaedic memory for all the little bistros and havens of his youth.  But the intervening years had dealt him some tough cards, including the advancement of muscular dystrophy.  He was still able to walk at the time, holding an arm for balance, and manage two or three stairs.  Some venues presented considerably more challenges than used to be the case.

The Cafe du Paris stood proudly waterside.  In fact it’s still there now.  I was shocked and delighted to see it appear on the front cover of the beautifully designed itinerary we received for our first cruise on the Queen Mary 2.

But there was one small problem with the Cafe de Paris: the dining room was upstairs.  My teenage self started to mull over my rather basic French for dealing with the problem.  But SF was no shy and retiring violet.  He headed to the foot of the stairs, and called up to a deserted dining room.  It was 11.30, and no one was ready to dine yet.

A waiter appeared and a discussion ensued.  The Maitre D’ flew down the stairs, and warmly embraced SF.  It seemed they had some history…one that I understand involved duck shooting.  I wasn’t sure whether I was more horrified at the thought of duck hunting, or at the prospect of my SF being let loose with a weapon.   This is the man who, on his one and only driving lesson, managed an eighteen point turn on the pavement on one of the busiest hills in Exeter.

After a lengthly exchange in what can only be called franglais, a call upstairs was made, and four waiters appeared, bearing a stout chair with arms.  SF was seated, and with a little grunting, his improvised sedan chair was hauled up the stairs to the empty restaurant. 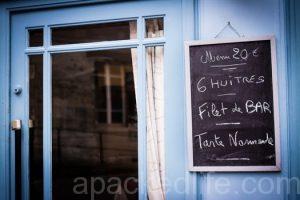 We were shown to a lovely table in the window.  Aperitifs were served.  There was an assiette of seafood, fish I didn’t recognise.  A salad course.  Creamy Normandy pork with cider.  A choice of wonderful desserts.  Cheese arrived on a magnificent chariot, with dried fruit and bread.  A digestif?  I was treated to a few sips of Calvados.

All around the customer numbers and noise ebbed and flowed, as the restaurant worked its way through the lunchtime service.  The cheese chariot was restocked.  Items were crossed off the menu as the kitchen ran low on stocks.  And at four o’clock we were once again escorted to street level, this time with considerably more grunting.  We were set loose with much hugging and fond farewells.

As I waited with SF while my mum fetched the car, a group of tourists wandered round the corner.  SF leaned on my arm, tired after a long hard day of dining.  Papa Tourist drew himself up to his full height and snorted.  “Disgusting, those young French girls with old men.  Shouldn’t be allowed.”