With ten and a half million people, and covering just under 31,000 square kilometers, Belgium isn’t the biggest of countries.  It’s well served by public transport, making getting around the country a breeze.  In fact, you’re looking at around two and a half hours to complete the longest train journey within the country, so it won’t take you long to explore thoroughly.  Here’s my guide to taking the train in Belgium.

Stations have a very standard arrangement of departure boards showing the platform for each train, its departure time, destination and intermediate stations.  You can buy tickets from the machine or at the counter.

Every train station also has a helpful set of posters, setting out all the services that depart, listed by the hour.  You’ll find these at the station entrance at small stations and on the platforms too at larger ones.

Be aware that not all Belgian stations are provided with lifts or escalators, so if you arrive with big bags, you may have to struggle with them on the stairs.  Brussels Central, I’m looking at you, at least from some platforms.  Probably best to wait until the first rush of passengers has moved on.    Also, sometimes the escalator will be at one end of the platform with stairs at the other, so don’t forget to check. 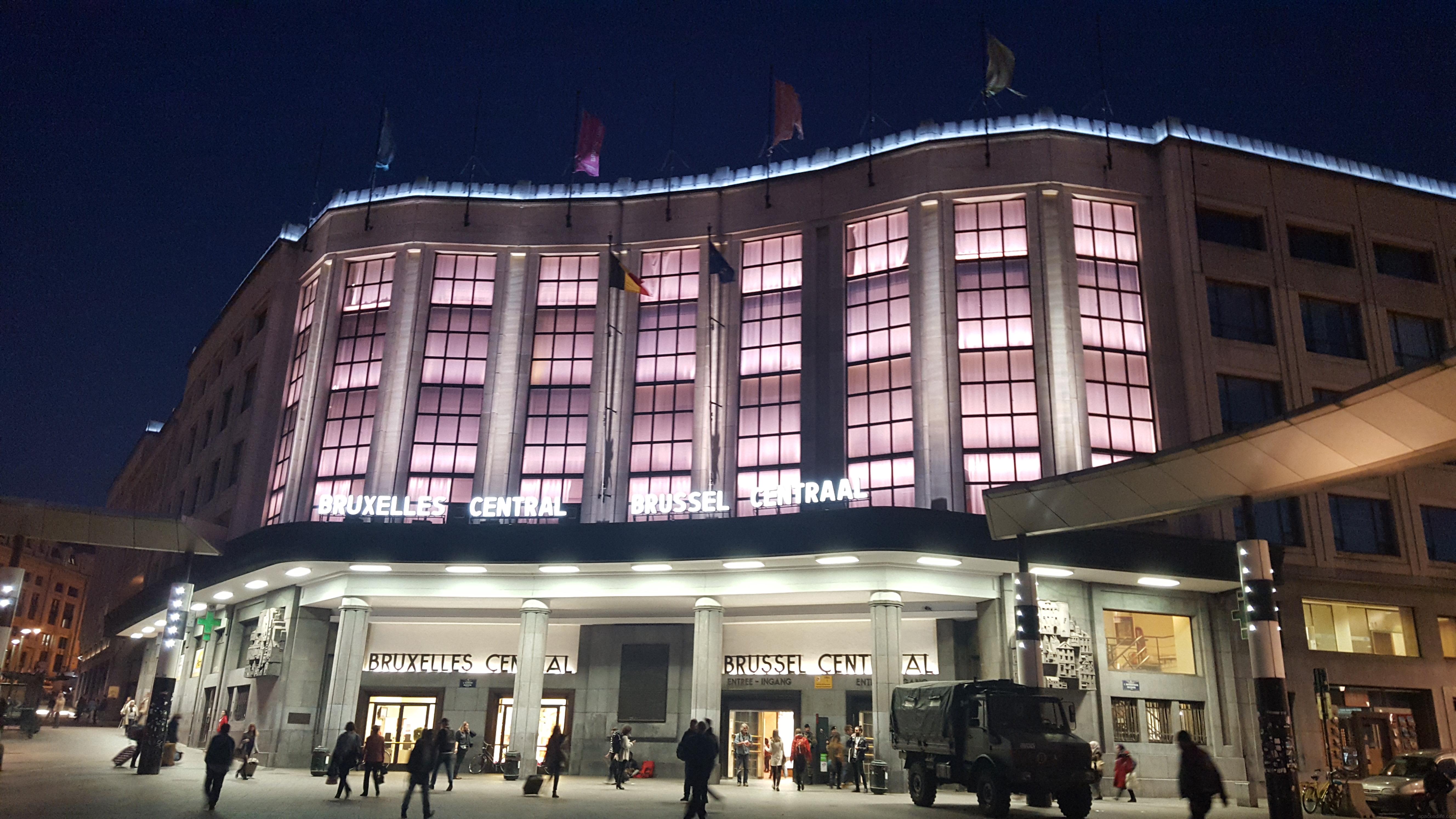 Brussels Central: Plenty of shops inside, a supermarket just opposite, and Grand Place within steps

As far as accessibility is concerned, Belgian trains have fairly steep steps up into the trains.  Larger trains (particularly the two level trains running intercity) have a lower section with easier level access.  If you have a heavier bag, I’ve found it easiest to get the bag up then me, and me out then the bag down.  This was a lesson learned after I traveled with an arm injury.  Having said that, I’ve also found fellow passengers really helpful in moments of arm failure.

For this Brit, the novelty of double decker trains still hasn’t worn off.  For great views, don’t forget to head upstairs should a two level train present itself to you.

One of my favourite things when waiting for a train in Belgium is to look at the list of international departures (yes, I am a bit sad like that).  You’ll find Benelux Intercity trains heading on to Rotterdam and Amsterdam, plus EuroCity trains to Luxembourg and Strasbourg then on to Switzerland.  You’ll also see trains heading to Maastricht and Lille.  So if you are heading to Belgium from Europe, you can see that there are plenty of connections to take you direct to the heart of the country.

Thalys is a Franco-Belgian company running French TGV trains between Paris and Brussels with some journeys traveling on to Amsterdam or Cologne.  Belgian domestic tickets are not valid, and special fares apply, with compulsory seat reservations.

If you are heading to Belgium from London, Lille or Amsterdam, you can take the Eurostar.  We’ve found that the Eurostar has become our preference over flying and doesn’t take a great deal longer if you factor in the check in times.  It’s also been very reliable, even on nights when storms in Europe had messed up its connecting services, with staff walking the queues to assure us that we were all going to make our train.  You can find my guide to Eurostar services here. 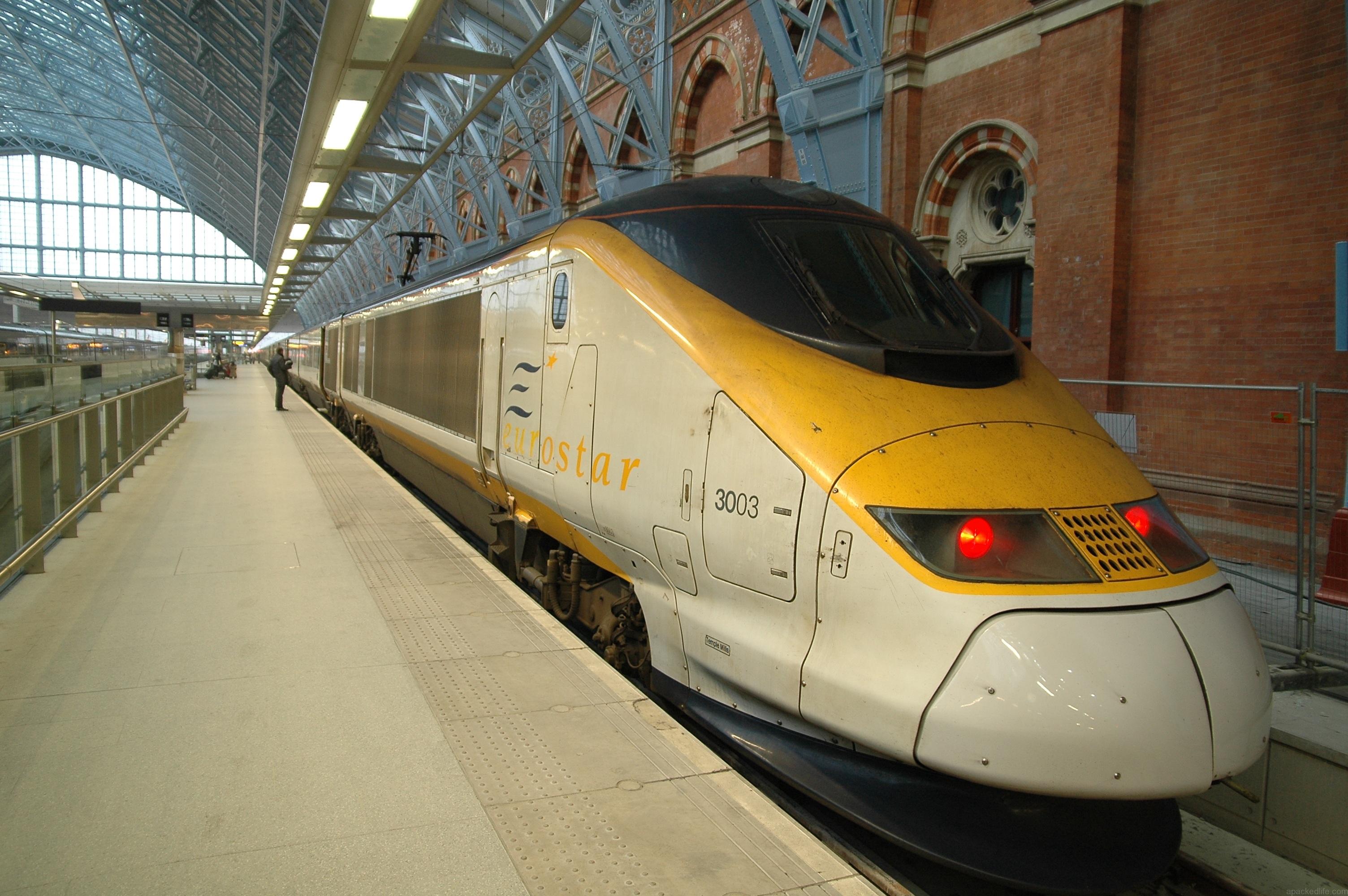 The Eurostar poised for Brussels at London St Pancras

Within Belgium, you’ll find all kinds of trains to take you to destinations large and small.  You’ll find the usual combination of direct and stopping services between destinations such as Ghent and Bruges.  Stopping trains can substantially increase the length of your journey, so only catch them if you want to stop off for a while.  Maybe try out Aalst if you do?

IC or intercity trains normally run hourly, stop only at larger stations, and normally use more modern trains.  You’ll see them noted on the departure boards by the initials IC.  Don’t be confused with the ICE InterCity Express, which is an international train. 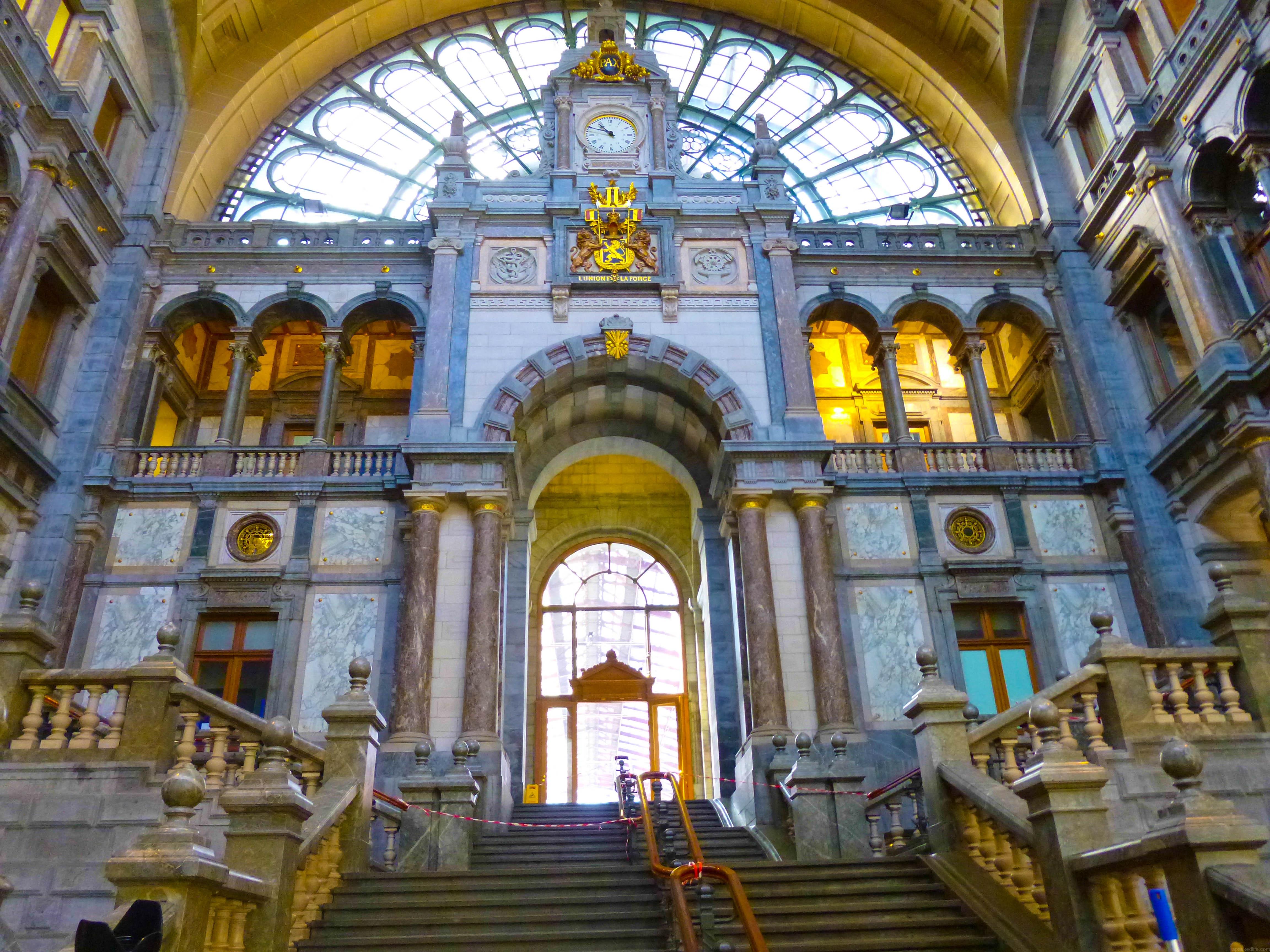 Antwerp Station: a destination in its own right

Taking The Train In Belgium: Discounts and Free Travel

There are some very generous discounts and special arrangements available on Belgian trains.  If you have children accompanying you, up to four under 12s can travel free for every fare-paying passenger.  You don’t need to buy a ticket; they’re covered on yours.  If you are over 65, a return journey anywhere in Belgium costs just 6.50 Euros, or enjoy first class for 13.80 Euros. 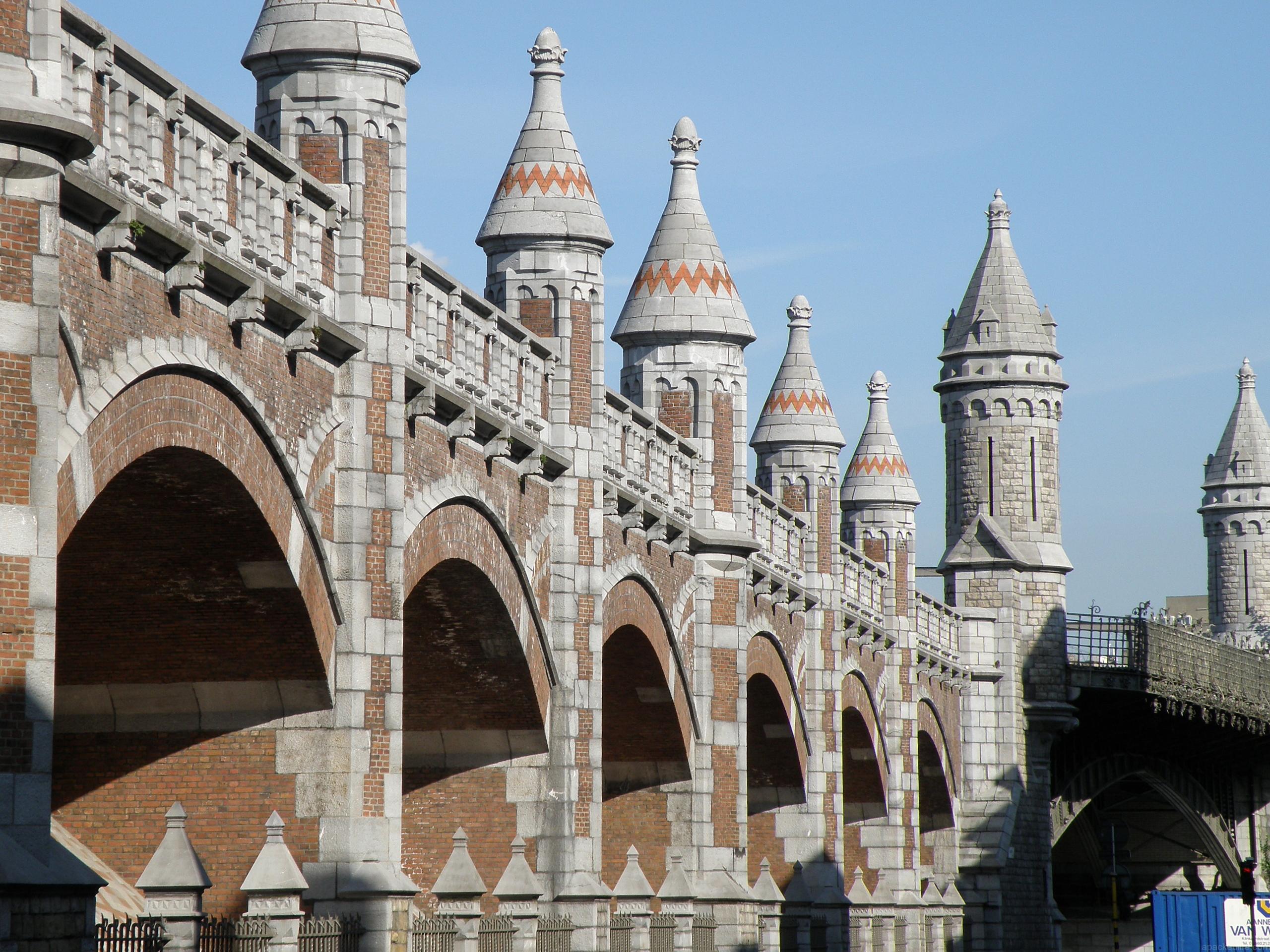 If you are pregnant and in the last four months of your pregnancy, you can travel in first class for no additional fee; just provide medical evidence of your expected due date.  With three or more dependent children under 25, you can apply for the large families discount card, which gives discounts of up to 50%.  With a special journalist card, travel in second class is free, or you can receive 75% off in first class.  If you are visually impaired, second class travel is free on production of a card, and there are also arrangements for free travel for carers.  Check the SNCB website for details.

Connections Between Trains and Other Public Transport

You’ll find pretty seamless connections between most major Belgian stations and other public transport services.  For example, in Ghent, walk outside the main Sint Pieter’s station, and you’ll find the trams to the centre within a few steps, plus a machine to buy your tickets.  In Ostend, a short walk will take you to the stop for the Kusttram.  This a brilliant and affordable way of exploring the whole of the Belgian coast. 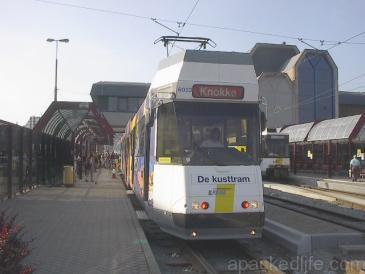 The Kusttram on its way to Knokke

In Brussels, you’ll find easy connections to Brussels Central from Zavantem airport and Brussels Midi/Zuid station.  Brussels is also covered by a network of metro services.   These fast and efficient lines cover places you’ll want to explore, like Saint-Gilles. 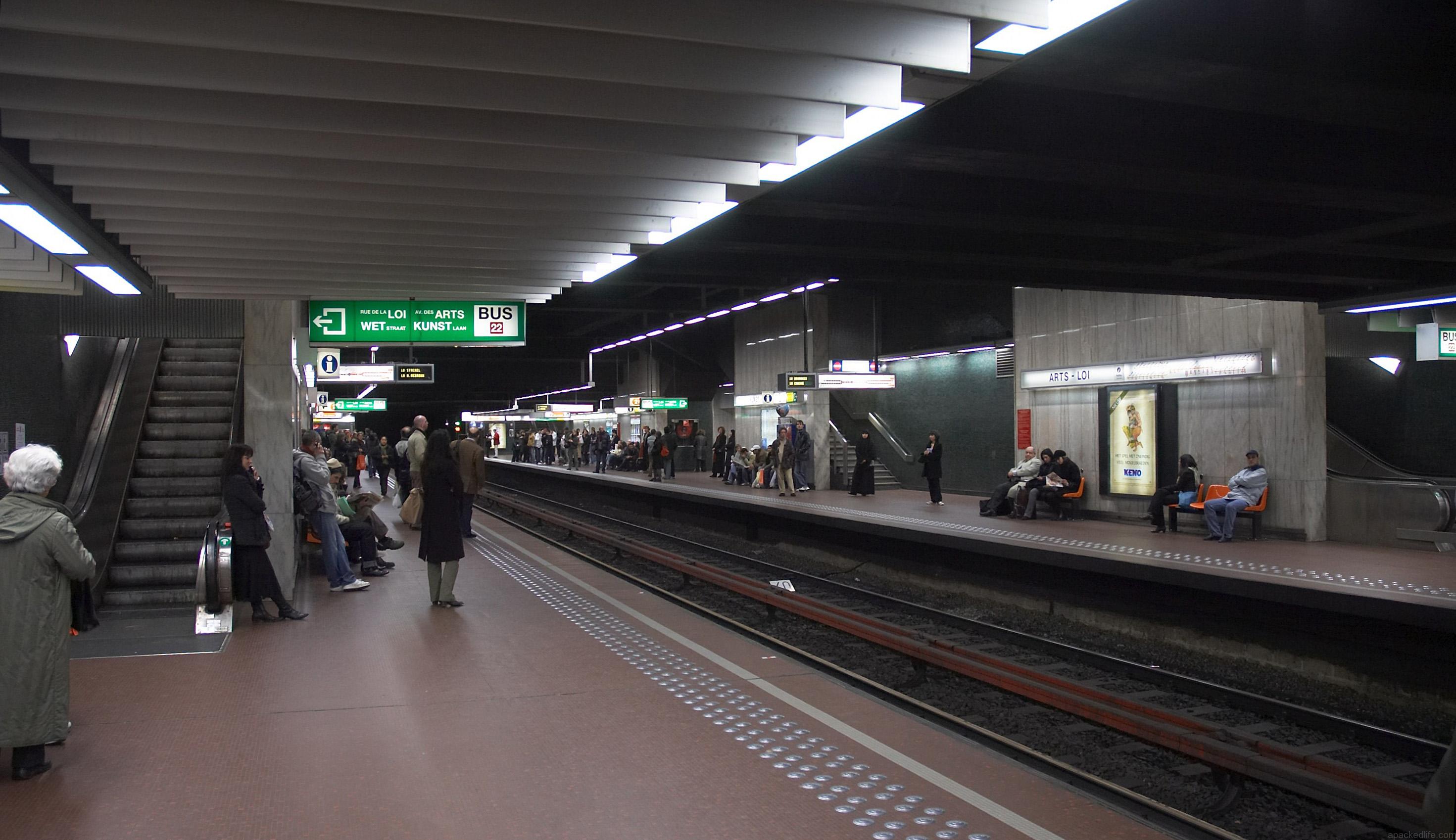 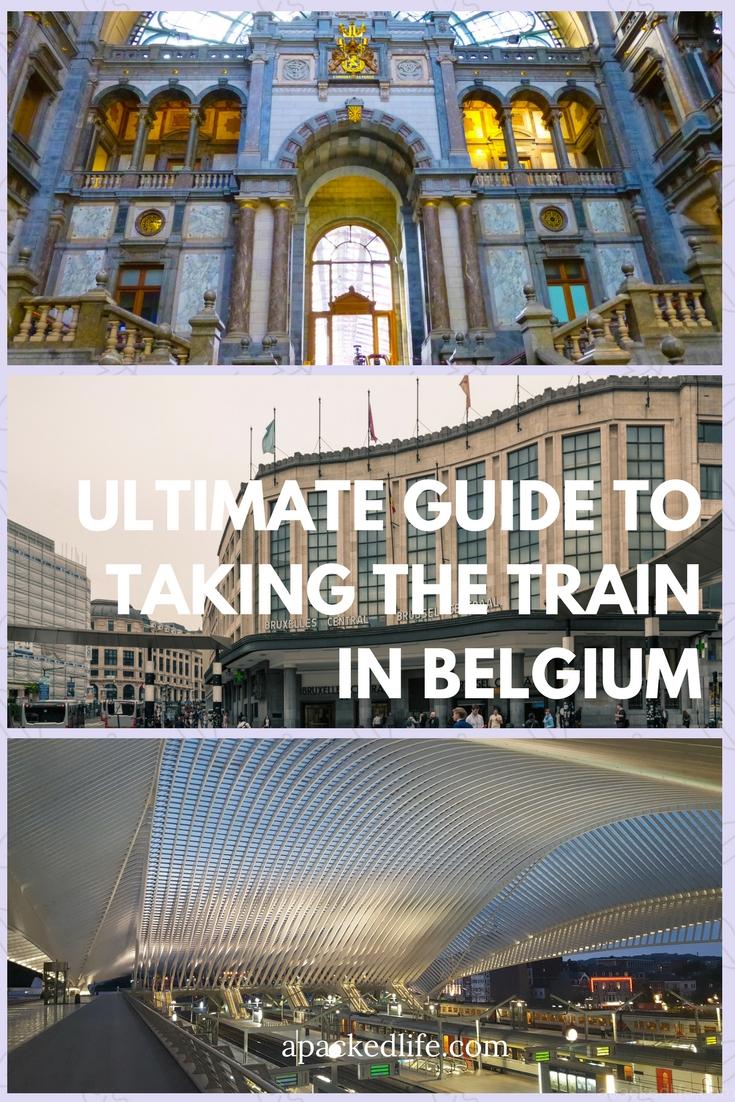 2 thoughts on “Ultimate Guide To Taking The Train In Belgium”