If there are two things in my life I’d struggle to give up, then both books and travel would be there, arm in arm, in those top spots.  So books that appeal to my sense of wanderlust are particularly special to me.  Let me take you through my bookshelves to share some of the delights that take me miles from the comfort of my sofa.  Welcome to wanderlust conveyed by print.  Here are my favourite books that I hope will help to inspire the wanderlust in you.  They’re not all travel books, and they’re a mixture of fiction and fact.  What’s common to all of them is a sense of place and otherness that helps transport me to different worlds.  Here’s my selection of books for travel lovers.

Books For Travel Lovers: We’ve All Gone To Look For America

For those of us from a small island, the sheer vastness of the US and its big open spaces is a source of wonder.  That vastness is well conveyed in Irma Kurtz’s Great American Bus Ride, which sees the author and former Cosmopolitan agony aunt take to the roads via the Greyhound.  Setting out from Boston, she crossed the country east to west twice, with one north to south flirtation too, armed only with a handbag and a weekender case small enough to fit in the overhead rack.

“I am a hussy of low appetites who always yearns shamelessly for rough travel….”  Irma Kurtz

Her great observations of human life also introduced me to a concept that has served me well: the “age of invisibility”.  Now that I too am a woman of a certain age, I’ve noticed that I fly under the attention radar with great ease, leaving me free to explore readily. 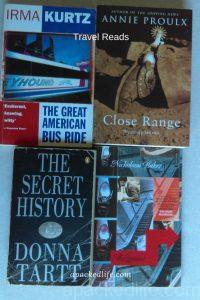 So many great American novels have a real sense of place, and that fuels my sense of sofa wanderlust wonderfully.  In this, I’d include works like Brett Easton Ellis’ American Psycho which is also a real product of its era.  But for my recommendations, let’s head out somewhere I’ve not yet been, and brush the dust off our boots in Annie Proulx’s Wyoming.  The Close Range collection of stories, best known, of course, for Brokeback Mountain, evokes such beautiful images of its setting.

“Then the violent country showed itself, the cliffs rearing at the moon, the snow smoking off the prairie like steam…”  Annie Proulx – The Half-skinned Steer

Then there’s the insight offered into Vermont, experienced through the eyes of a suburban Californian in Donna Tartt’s The Secret History.  Richard, the narrator, arrives from Plano to experience the intoxication of academic life on campus, bringing with it a whole new appreciation of the delight of a Vermont autumn:

“A group of red-cheeked girls playing soccer, ponytails flying, their shouts and laughter carrying faintly over the velvety, twilit field.  Trees creaking with apples, fallen apples on the grass beneath, the heavy smell of them rotting on the ground and the thrumming of wasps around them.  Commons clock tower: ivied brick, white spire, spellbound in the hazy distance.”  Donna Tartt – The Secret History

And finally, come with me to explore the city, as experienced by the narrator in Nicholson Baker’s The Mezzanine.  This is a short read, which you will most likely either love or hate; it’s certainly a Marmite book.  It’s essentially the story of one man’s lunch hour and his urban experiences, complete with at times more footnotes than narrative.  What I find fascinating here is the detail with which he sets out the experience of American consumerism from lunch counters to cashiers and paper bound rolls of coins, all so exotic to my ears.

I’ve left aside for this post the majesty of the classic English novel.  I’ve not considered Jane Austen’s Regency splendors, Dickensian London, nor the beauty of Thomas Hardy’s Dorset.  Instead I’ve focused on incidental glimpses of life revealed, almost as an afterthought, in novels that are products of their setting.

Firstly, come with me to Antonia White’s The Sugar House, the third of the Frost in May quartet.  Leaving aside the beautiful illustration of the Virago cover, there are delights inside sharing of the London of artists, as experienced by Clara, now a jobbing actress in the 1920s.

“Here was proof that she was really living in Chelsea where it was as natural to see painters walking about bareheaded carrying their pictures as to see bowler-hatted bank clerks carrying despatch cases in West Kensington.” Antonia White – The Sugar House

Then there’s the quintessentially English tale that is Richard Adams’ The Girl in a Swing.  The author of Watership Down, The Plague Dogs and Shardik sets out a tale beginning in Copenhagen and returning to the Berkshire countryside:

“Rain will follow the wind, probably before midnight; a steady quenching rain on the hollyhocks and lilies, the oaks and the acres of wheat and barley stretching beyond the lane.” Richard Adams – The Girl In A Swing

The Girl of the title, a rare antique, ties together this dark tale with many layers of meaning and beautiful imagery.

Scandinavian fiction and drama has become a big thing here in the UK, and the whole Scandi noir genre has given me a hunger for snowy spaces.  Anne Holt’s 1222 sees a derailed train (at the aforesaid 1222 metres above sea level) cause its passengers to take shelter in a centuries old mountain hotel, where one of them will be murdered.  It’s a classic locked room mystery, set in a location full of atmosphere and otherness.

“It was as if the sound of the storm had altered.  The wind was still angry and howling, but I was certain the thuds and blows were coming less often ,and with less ferocity.” Anne Holt 1222

Liza Marklund covers related murderous territory in Exposed, but through the eyes of journalist Annika Bengtzon.  Here we get to see the life of Stockholm as experienced through its working population, complete with unreliable bosses, union difficulties, and accommodation struggles.  In many ways this is a tale of sameness to everyday life in so many places.  But it’s in the small details that we realise the differences of life lived in another country: deposit monies on empty cans, tin window ledges, sour milk, raspberries, rye bread and cheese for breakfast. 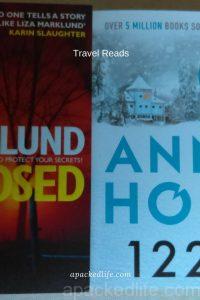 Despite only having made it as far as Tokyo thus far, my bookshelf has a big collection of books celebrating Japanese culture.  Like many people, I read Memoirs of a Geisha, then got inspired to read more.  Liza Dalby, the only foreigner to become a geisha, writes with elegance and eloquence about the experience.

“A three-level tier displaying rows of powdered rice cakes stood inside the vestibule.  Geisha names, written in bold ink strokes on wide tongues of paper, hung from each contribution.  The younger the geisha and the more recent her debut, the closer to the bottom were her rice cakes.” Liza Dalby – Geisha 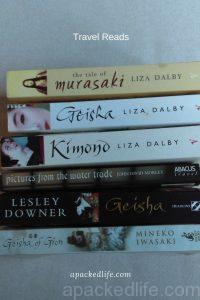 I grew up on the coast, and one of my earliest treasures was a copy of Defoe’s Robinson Crusoe.  As I wandered the red cliff coves of south Devon, my imagination was firmly fixed on regaining the last supplies from my shipwreck, and building my own small fortress at the cliff.

I was also inspired to dream of seafaring adventures by Robin Knox-Johnston’s solo voyage around the world, as he set off from Falmouth with the small ketch Suhaili in 1968.  A World Of My Own is the story of that voyage; it’s full of misadventures and magnificently British understatement.

“I turned to get some cutlery, put the kettle on the stove, and sat down – on the pressure cooker.  As I was not wearing any clothes at the time I leapt up with a yelp of pain.  There was no important damage, but it was about three days before I could sit down comfortably again.” 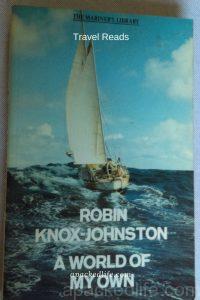 Another book on my Adventures shelf is the wonderful tale of claiming Alaskan land under the Homestead Act.  Norma Cobb, complete with husband Lester and their five children, set up home north of Fairbanks.  Their first cabin saw the roof collapse under snow, and the creek flooded them out during spring breakup.  But they endured and eventually thrived. 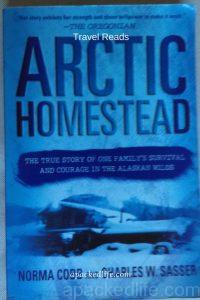 Bears were a particular issue:

“As for the poor bear, he was more alarmed than anyone else in camp.  Gunfire, people screaming and stampeding, dogs barking…  He woofed, and shimmied up the nearest tree with the agility of a chased squirrel.” Norma Cobb – Arctic Homestead

The whole book is a tremendous endorsement of strength in adversity, and so full of respect for the beauty of the sometimes harsh environment.

So where else should I travel by page?  Where do you adventure from your sofa?  I’ve barely skimmed a single shelf today, and there are many more books to be read during those chilly evenings at home, or those flights when I am bounding with anticipation.

You can read more about my adventures during 50 years on the road here.  And if a bookstore is an adventure to you too, pop here to read a gorgeous account of the love of the bookseller’s wares. 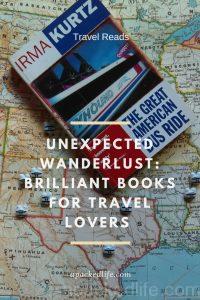